Game of Thrones‘ final season killed two key characters in its fourth installment: Rhaegal the dragon and Missandei of Naath (Nathalie Emmanuel). David Benioff and Daniel Weiss’ adaptation of George R.R. Martin’s A Song of Ice and Fire may have stealthily said goodbye to another player as well in “The Last of the Starks,” albeit in considerably less violent fashion.

Heading into the final season, The Hollywood Reporter placed the official prediction on the board: nobody was safer than Tormund Giantsbane, the wild-eyed wildling played by Norway’s own Kristofer Hivju. After all, Game of Thrones had two shots at killing Tormund in memorable fashion in season seven’s final two episodes: at the hands of wights in “Beyond the Wall,” and during the Wall’s fall in “The Dragon and the Wolf.” Tormund evaded what would have been an iconic ending in both scenarios. Why doubt his ability to make a clean getaway once all is said and done?

Knock on wood, because there are still two episodes left, but Tormund’s chances of survival have only gone up following “The Last of the Starks.” The White Walkers are dead, Tormund’s hopes for a love life with Brienne of Tarth (Gwendoline Christie) are similarly deceased, and the Free Folk figurehead has officially decided to pack it up and head back home to where it’s once again safe: “the real North.” What he lacks in a romantic partner he has gained in a new companion: Ghost, Jon Snow’s (Kit Harington) direwolf, wounded in the battle against the wights but happily still alive, if feeling a bit jilted by his former owner.

Have we seen the last of Tormund Giantsbane on Game of Thrones, after his drunken night in the halls of Winterfell and his subsequent goodbye to Jon Snow? It certainly feels that way — and frankly, for fans of the character, it’s best to hope that he’s well and truly gone, short of a heartwarming epilogue scene in the series finale. Of course, Hivju’s lips are sealed on the matter. “There are still two episodes to go,” he insists, leaving the door open for a return. But in the event that Tormund’s time with us has indeed reached its end, it’s best to take the time to say farewell. Ahead, The Hollywood Reporter checks back in with Hivju for the second time this season, this time with a bittersweet goodbye firmly on the mind. 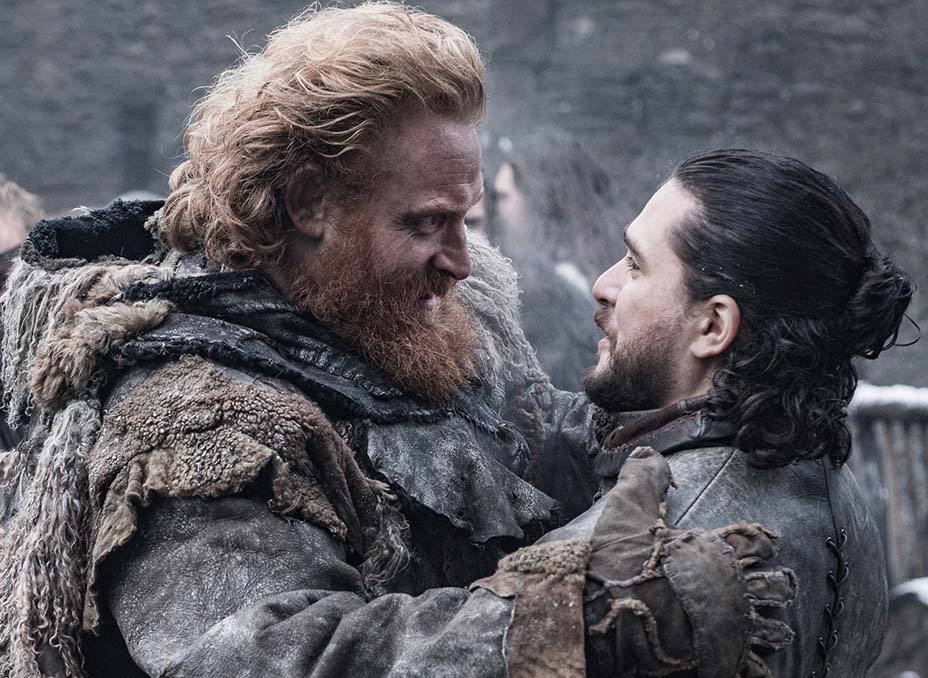 “The Last of the Starks” opens on a solemn note before quickly devolving into debauchery.

It was nice we finally had a party on Game of Thrones. There aren’t many of them!

Exactly. (Laughs) But it was an intense episode. It feels like Tormund has fought the dead, and now he can go back home. It’s nice.

Game of Thrones is a show where happy endings are few and far between. We know at this point not to get too excited about a good thing. You never know what could pull Tormund back, and of course, you can’t say one way or the other… but it feels like a goodbye. Did it feel that way to you?

Me and Kit talked about that. When we rehearsed the scene, it was like these two characters had so much history together. They have fought so many battles together. They have gone from being enemies to being very good friends. I felt there was an aura of grit in it, somehow. When I tell him: “You belong to the North — the real North,” it’s because he was with [Rose Leslie’s Ygritte], and she was like a sister to me. It feels like a long journey has come to an end. There are still two episodes to go; I’m not saying anything. But they fought the dead. It was their objective for so many years. Now they can at least say goodbye.

As you mention, the White Walkers are done. Were you surprised to survive the battle?

I must confess, what I was thinking when I was reading the script, I kept waiting for Tormund to die … something where Jon’s about to die, Tormund steps in, and Jon survives. I kept waiting for my death scene. Every single page, I kept thinking I would find my death scene. “Here’s my death scene! Here’s my death scene!” And then I get to the end of the script, and it’s like: “…I don’t have a death scene?” (Big laugh) So, it was pretty amazing to survive it! It was really amazing to survive the shoot, as well. I was very happy about it. This was part of Tormund’s story since he was two or three years old. It’s a big moment.

You have brought a lot of levity and comedy to Tormund over the years. Did you feel even more lightness to him in this past episode — like the weight of the world is off of his shoulders?

I had the same thought when I shot it. It’s a celebration of [overcoming] so much fear and so much violence and so much death. It’s a very sad day, because Tormund probably lost half of his men as well. But nobody believed they would survive that night, because the threat was so incredibly huge. For me, for my mind, I decided it was a celebration of life. It turned out to be a celebration of Jon, as well. There aren’t many celebratory speeches in Game of Thrones, but I really thought Jon deserved one. What hasn’t he been through? I think Tormund saw something in Jon from the very first meeting, their very first encounter, when they met in Mance Rayder’s tent. He saw that this guy has a fire. He has integrity. When I was captured in Castle Black, I was sure I was going to die, and he gave me a chance to be his ally. I think Tormund was a bit more dynamic than Mance Rayder, who died because he wouldn’t bend the knee. Tormund and Jon have had a really long journey together. I think Jon deserved the speech from Tormund, even though Daenerys didn’t like it.

What do you remember about the shoot?

It was a crazy day. Even though we weren’t drinking alcohol, it suddenly felt like a real party. The funny thing is that [David Benioff and Dan Weiss] are playing two wildlings standing in front of Tormund. We had so much fun playing those scenes. Kit was soaking wet, because after every take, I was splashing wine on him. (Laughs) We laughed a lot. It was an exhausting thing to do for a day.

Were you sad for Tormund when Brienne chose Jaime?

Well, you know, he has shown her so much love, affection and attention, and hasn’t received anything back. In the Free Folk’s culture, if a woman gives you a shoulder, she’s smiling at you. It’s a cultural misunderstanding that gave Tormund more hope than he should have had. Even though it was a running joke [through the series], there has been no irony in Tormund’s love for Brienne. I think he feels she’s the greatest woman on earth. I tried to give his sorrow and disappointment as much drama as I could.

When he leaves Winterfell, what’s the defining feeling: heartbreak over losing Brienne, or joy over getting the chance to return home?

It’s what he tells Jon: “The women down here don’t like me.” If Brienne had asked him to stay, he would have done it. But when the hope is out with her, it’s a good reason for him to go home. The game of thrones has never been Tormund’s game. Tormund has been in the game of defeating the dead. But the show is still called Game of Thrones, which is why we have two more episodes to go.

My viewpoint on the early end to the White Walkers is that it shows what humans can do if we can move past our baggage. We can accomplish the impossible. The rest of Game of Thrones looks like it will challenge our ability as a species to move past our differences. What was your take on what it means to lose the Night King midway through the final season?

As I said, it’s called Game of Thrones, not the war against the dead. The White Walkers and the Night King were the main antagonists from the outside, but death is always the antagonist of life. But the main antagonist lies behind the game of power. That’s been the core of the show, the whole way. It’s very hopeful for humanity that they could gather to defeat the dead — or global warming, or war, if you want — but still, we have to figure out all the shit we have within ourselves. There’s definitely a message. We’ll have to see if humanity wins or not.

We may never see Tormund Giantsbane again. Without spoiling one way or the other, what has it meant to you to play this character, a role you will be associated with forever?

Every actor has some part in them that was just made for them. Tormund was one of those roles. I read a lot of Icelandic sagas when I was young. I’ve always been interested in the Viking culture. There are a lot of similarities between how the Free Folk live and how the Vikings were thinking, and what their values were, their warrior philosophies. Since I’m a Norwegian guy and my ancestors are Vikings, a part like that has always been in my body. When I came into Game of Thrones, Tormund was an antagonist. He was a warrior with good humor at that time as well, but his arc has gone into him being a symbol of love and friendship and loyalty and being able to, as you say, leave that shit behind — to take away the past. Crows have been killing Free Folk for centuries, but Tormund was able to leave that behind and befriend Jon Snow and his people for a greater cause. I think that’s been a great thing to live through. It feels like I have given Tormund my everything. He can go on in the world and be at peace now.

And what about Ghost? Jon Snow bequeathed him to Tormund without so much as a pat or a “good boy.” Will Ghost have a better life with you?

I promise on the Seven Gods, the Old Gods and the Free Folks’ non-gods because we don’t have any: I promise to take care of Ghost. I will feed him. I will clean him. I will treat him. I will be very cozy with him. I will not do anything other than be very nice to him. 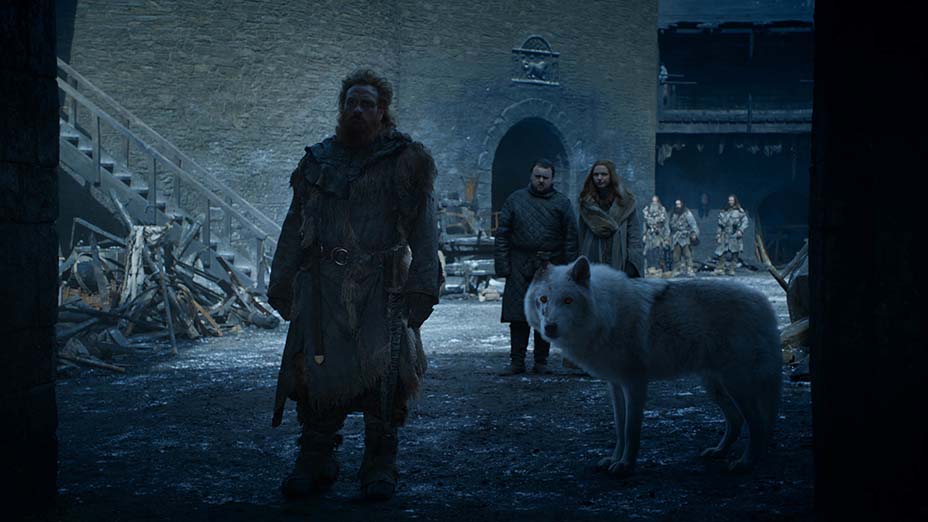 'Game of Thrones' Final Season Podcast: "The Last of the Starks" Fuels a Westeros Roast