In the case of “A Knight of the Seven Kingdoms,” narrowing the rich dialogue down to 15 choice quotes was an impossible task — not quite as challenging as conquering the White Walkers, but still, tough! Given the relatively wordless quality of “The Long Night,” one might expect an easier time slimming down the list for director Miguel Sapochnik’s 82-minute epic. Technically, it is easier, but easy outright? Even here, a few key quotes are left behind on the battlefield, not unlike the men and women who fell against the Army of the Dead. All the same, here’s the very best of the best.

Dolorous Edd (Ben Crompton) is the first main character with spoken dialogue, several minutes after the episode begins. He mutters the vulgarity at Samwell Tarly (John Bradley), shocked to see his friend from the Night’s Watch on the frontlines of the fight. These are not Edd’s final words — those would be “Sam! Get up!” — but they’re closer to Edd’s spirit than his actual last line.

Far from the first time we’ve heard the iconic Valyrian catchphrase in the series, but first time in a bit — and it marks a great exchange between Melisandre (Carice van Houten) and Grey Worm (Jacob Anderson) as the Red Woman comes to Winterfell, bringing some much needed firepower.

Melisandre and Davos Seaworth (Liam Cunningham) rarely saw eye to eye. Indeed, the last time they saw each other, murder was on the menu. Melisandre’s first words to Davos when she arrives back in Winterfell are not only the last words spoken between them, they also predict Melisandre’s own future — and not for the last time in this episode.

Daenerys and Jon Snow watch from high above and far away as the Dothraki are snuffed out by the Army of the Dead. Jon all but spits out House Nale’s words: “Stick to the plan.” Daenerys, meanwhile, wants vengeance for her people, and reasons that there’s no need to stand idly in wait for the Night King now that his army has fully arrived. 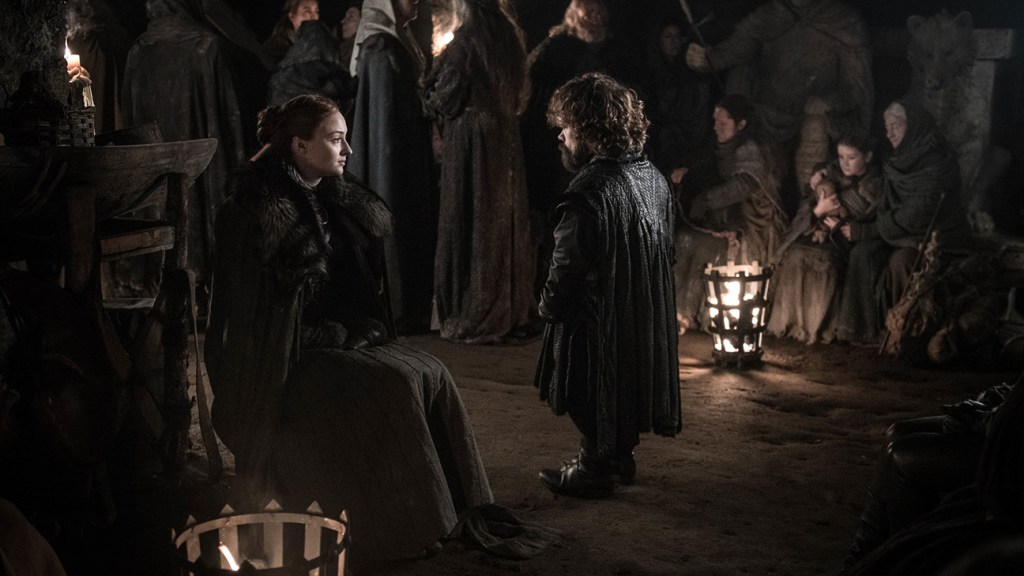 Yet another callback, one of the many in this episode. Once upon a time, Jon Snow used these words to teach Arya (Maisie Williams) how to use a sword. Here, it’s Arya turning the phrase for Sansa (Sophie Turner), gifting her a dragonglass dagger while instructing her to find safety in the crypts.

6. “If we were up there, we might see something everyone else is missing — something that would make a difference.”

Speaking of the crypts, let’s hang out there for a minute! Tyrion (Peter Dinklage) gets the first word in the subterranean section of the episode, expressing his frustration over not being out on the battlefield. Luckily, he gets his chance in a bit to throw himself into the fight, thanks to the skeletal remains raised by the Night King.

It feels like a lifetime has passed since Tyrion and Sansa were married. In reality, it’s just been a few years. Before then and after, Sansa was alternately betrothed and married to Joffrey (Jack Gleeson) and Ramsay (Iwan Rheon), utter monsters compared to her Lannister ex. Given the way they interact in “The Long Night,” perhaps Tyrion and Sansa’s time together isn’t quite over yet.

8. “Without the Dragon Queen, there would be no problem at all. We’d all be dead already.”

Missandei (Nathalie Emmanuel) isn’t thrilled to hear Sansa smack-talking the Mother of Dragons while hiding out in the crypt, and rightfully so, given everything she’s endured on behalf of Daenerys. But the past couple of episodes have forced us to consider who’s right about Dany: Sansa or Missandei? 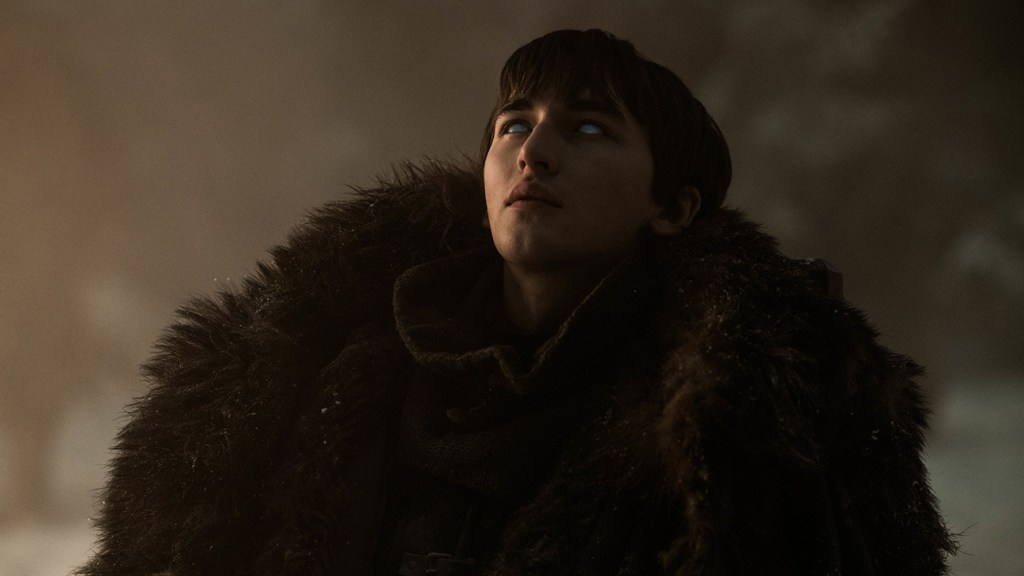 Bran Stark (Isaac Hempstead Wright) has more poignant words in his first scene with Theon (Alfie Allen), after the Iron Islander expresses regret for the way he acted in the past. Those words: “Everything you did brought you where you are now, where you belong: home.” Very wise indeed, but not as fun or odd as what Bran says before rolling his eyes back into his headand taking off into the sky via a flock of ravens.

Not remarkable, except that it’s the final spoken line of dialogue from Lyanna of House Mormont, the Lady of Bear Island, who falls in battle a few minutes later while killing an undead giant. Bella Ramsey, even with only three episodes remaining, you will be sorely missed.

'Game of Thrones' Breakout Star on Her Brutal Battle of Winterfell Moment: "I Was Very Pleased"

The Hound (Rory McCann) does not like fire. Not exactly a newsflash. So when Sandor Clegane runs away from the fight, nobody’s shocked — but that doesn’t stop the Hound from spouting out some fiery words to describe the stakes of the war against the dead. Little does he know it can all stop right now, if he can shore up the strength to brave the fires and find an old friend.

Richard Dormer’s Beric Dondarrion is the man who convinces the Hound to rejoin the fight, once he points out how Arya is fearlessly fending off the death. The question serves as Beric’s final spoken line of dialogue, unless you want to count “go,” “run,” and copious amounts of blood-gurgled screaming. A little dignity for the brutally slain Lightning Lord sounds nice to me. 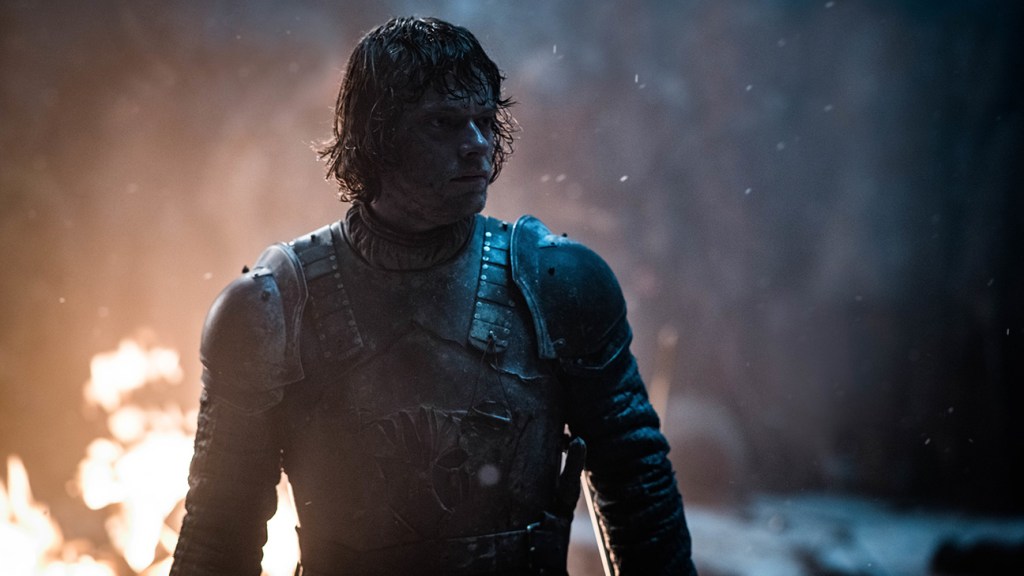 Melisandre and Arya first crossed paths in season three. Back then, the Red Woman promised they would meet again someday. Everyone wondered what that reunion would entail — including Arya. Well, wonder no more. Melisandre calls back the famous phrase from one of Arya’s very first mentors in order to help guide the young Stark toward her ultimate destiny: saying a big fat “not today” to the Night King, courtesy of a Valyrian dagger.

Would you believe it? Yet another familiar word — or phrase, really. Daenerys’ command to Drogon has been used to engulf enemies in flames several times in the past. Here, it serves that same purpose, but doesn’t quite live up to the billing. When the fires die down, the Night King still stands, staring up at the Dragon Queen with his frozen menace.

In terms of shocking deaths, nothing comes close to Arya becoming the Night King slayer. It comes near the very end of “The Long Night,” in the thick of a long stretch of wordlessness, with composer Ramin Djawadi’s haunting score pushing the action along. It’s the perfect series of sequences to close out the least talky episode of a very talky series.