Welcome to Final Path, a regular feature leading up to the final season of HBO’s Game of Thrones. In every Final Path, The Hollywood Reporter‘s resident Westeros expert, Josh Wigler, will offer a character-by-character deep dive of their journey through seven seasons, as well as what can be expected in the upcoming eighth and final season. Up next: the Night King.

Drogon, Rhaegal and Viserion put the fire in George R.R. Martin’s song. Guess where the ice comes from?

The Night King was a relatively late arrival in Game of Thrones, first appearing in season four, but his minions have been a part of the show’s fabric from the very first scene. The White Walkers made their threat known in the series premiere, “Winter is Coming,” toying with men who were foolish enough to stalk their territory beyond the Wall. Since then, the Army of the Dead has only grown bolder, thanks in no small part to the Night King’s ice-cold leadership.

For sixty-seven episodes and counting, the Night King’s goals have been largely enigmatic, aside from the obvious: he wants to destroy every living creature in his path. But what’s driving him beyond those desires? If we’re ever going to find out, the time is now, with only six episodes remaining before the story closes once and for all. As Final Path starts winding down, it’s time now to survey the road ahead for the deadliest entity in Westeros. 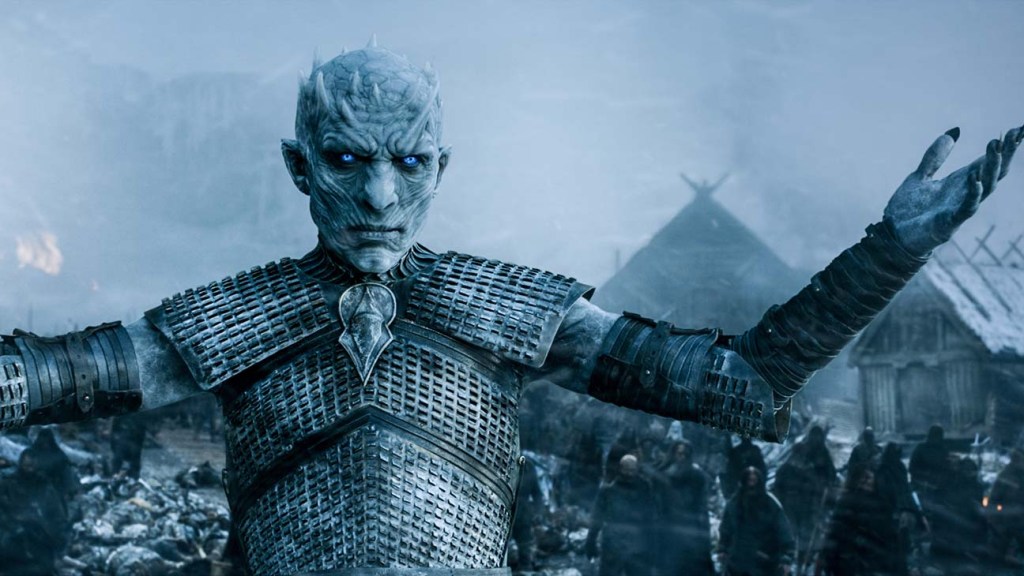 Names and Titles: The Night King, bringer of death, lord of the White Walkers and high general of the Army of the Dead, he who raises his arms incredulously at puny mortals in moments of brutal victory, Darth Maul on ice. May not all be actual titles.

First Appearance: “Oathkeeper,” season four’s fourth episode. The Night King’s first scene was a huge shock to the system for both the book-reading and show-only crowds, as George R.R. Martin has yet to reveal anything remotely resembling the final moments of this episode, in which a White Walker brings a baby to the Night King’s palace far north beyond the Wall.

Last Appearance: “The Dragon and the Wolf,” the season seven finale. The Night King rides his new chariot, the undead Viserion, and decimates a large swath of the Wall with a huge burst of frozen fire. He and his army proceed to march through the gigantic hole, setting foot in Westeros proper for the first time in the series.

Best Friends: The Night King? Friends? Come on. One imagines he has some kinship with his fellow White Walkers, but calling them friends feels like a stretch. Within the White Walker ranks, there are several other soldiers with similar threat levels, if not quite yet proven to be as deadly as the main man himself.

Worst Enemies: Besides the entire human race? The Night King doesn’t seem particularly fond of Jon Snow in particular, nor does he have much room in his heart for Bran Stark. Indeed, the Night King was adamantly opposed to the Three-Eyed Raven (Max Von Sydow) as well as the Children of the Forest, all of whom he slaughtered back in season six’s “The Door.” 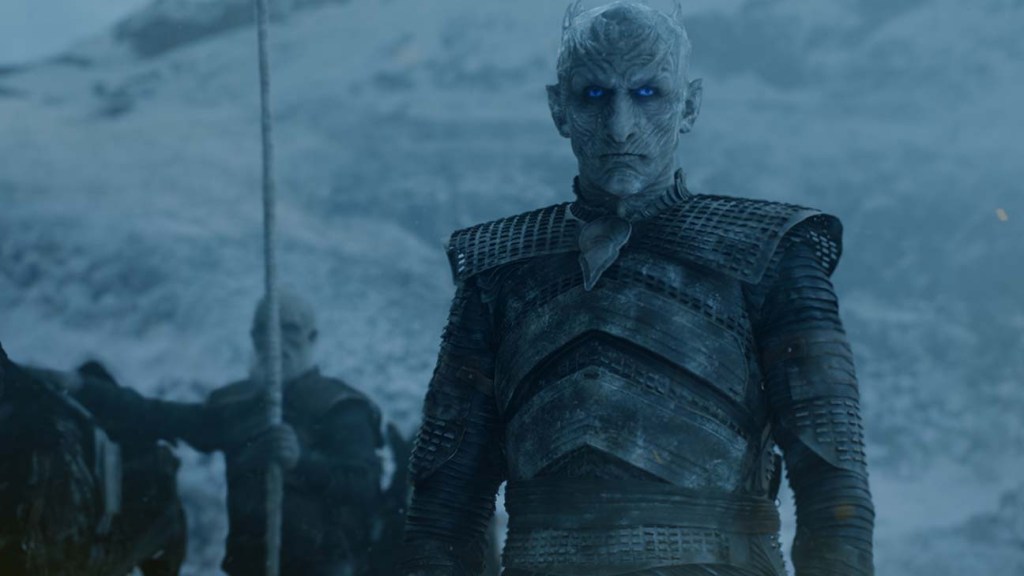 Best Kill: Viserion, and it’s not close. The Night King’s warpath is responsible for huge amounts of death, but his best individual kill on the record is the ice lance he launched through the air, right into the heart of a high-flying dragon. Maximum scores for accuracy, efficiency and style.

Worst Wound: None so far! Through the season seven finale, the Night King has not sustained a single loss, aside from losing a couple of White Walkers at the hands of Jon Snow and his Valyrian sword Longclaw. One imagines the final, fatal wound is just a few episodes away.

Critical Moments: Every scene with the Night King has served a deliberate purpose. First: the reveal in “Oathkeeper,” the first time we learned of the villain’s existence. Next: season five’s “Hardhome,” when the Night King launched his assault on a colony of wildlings, making the full force of his powers known; season six’s “The Door,” which revealed the Night King’s origins as a man-made White Walker thanks to the Children of the Forest; season seven’s “Beyond the Wall,” in which he ice-lanced Viserion; and finally, season seven’s “The Dragon and the Wolf,” in which he and Viserion broke open the Wall and waltzed on into Westeros. The rest is history in the making.

Unresolved Mystery: Who was the Night King, before he was the Night King? What makes him tick? Is he just on autopilot with his desires to massacre mankind, or is there more beneath the surface — and if there’s more, will we ever find out? 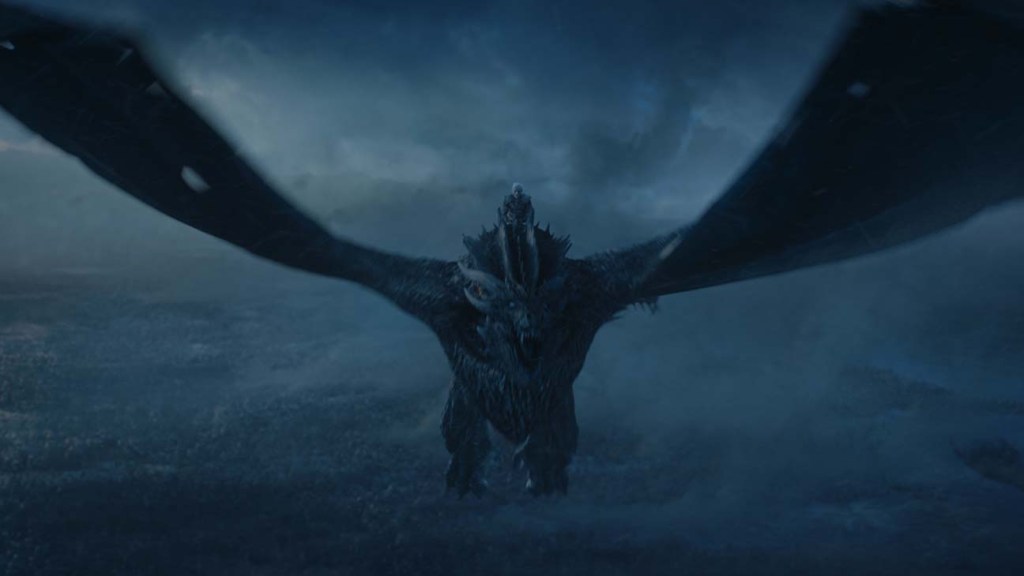 Final Predictions: George R.R. Martin has not finished telling the original tale which Game of Thrones is based on. He has not revealed the White Walkers’ purpose. He hasn’t even introduced the Night King yet, at least not as anything other than a piece of ancient folklore; certainly not as the series’ primary antagonist. It is incredibly possible, likely even, that the Night King from the books and the Night King of the TV series will have very little do with one another, if anything at all.

The good news about all of that? It means total victory for the Night King is off the table, unless creators David Benioff and Dan Weiss are aiming for a conclusion that’s completely off-course from Martin’s unpublished plan. Deviations here and there are expected, but a full pivot? Unlikely.

Here’s the bad news: Martin promised the final notes of his story will be “bittersweet,” and those are notes the Night King can contribute to in spades. He and the Army of the Dead have arrived in the Seven Kingdoms. Their warpath is undeniable. One or more main characters are destined to die at the hands of the White Walkers, and the smart bet is certainly on the side of “more.” Jorah Mormont (Iain Glen), Brienne of Tarth (Gwendoline Christie), Beric Dondarrion (Richard Dormer) — these are just a few of the main characters who could see their watches end thanks to the Night King’s forces.

The defeat of the Night King feels certain, as does the wrath and heartbreak he will inflict on his way out the door. Less certain: learning anything more about him. We know he was once a man, Cobra Commander style, before the Children of the Forest turned him into the first White Walker. Who was he? It’s an easy prediction, but we’re going with it: the Night King was once a Stark, and part of his plan is to start a new White Walker dynasty using Winterfell as the seat of his power. But will we get that level of detail with only 432 minutes remaining? It’s possible, especially if Bran uses his visionary abilities to peer back into the monster’s past. More likely — and hopefully! — the Night King’s story will continue beyond Game of Thrones, with his origin at least partly explored in the upcoming successor series.