“They call me Giantsbane. Want to know why?”

Game of Thrones‘ very own Tormund utters these words to a roomful of strangers, warm and cozy in front of a Winterfell fireplace, enjoying a moment of peace before inevitable death. The response? Stunned faces and stone-cold silence, as he takes a seat and spits out an incredible answer.

“I killed a giant when I was 10,” Tormund tells his captive audience, the Game of Thrones embodiment of the “literally no one” meme. “I climbed right into bed with his wife. When she woke up, do you know what she did? She suckled me at the teat for three months. She thought I was a baby. That’s how I got so strong … giant’s milk.”

Cue Tormund’s ferocious milk-chugging, an act of horror that goes on for so much longer than anyone would ever reasonably expect. (Luke Skywalker at least had the decency to make his swig a quick one.) It’s enough to prompt the otherwise sober Davos Seaworth into indulging in a drink after all — and in the world outside of Westeros, it was enough to keep the Game of Thrones cast and crew laughing for hours.

Through the final season’s first two episodes, actor Kristofer Hivju has had plenty of scenery to chew on — or chug, as the case may be. It’s a happy thing, considering where his character ended up in season seven: Eastwatch, bearing witness to the fall of the Wall. Heading into the long offseason, no one knew if Tormund survived the catastrophe. Now we know — and now we’re left to wonder if he’ll have the same luck in his next match-up with the White Walkers in Sunday night’s highly anticipated Winterfell battle episode, directed by Miguel Sapochnik.

Ahead, Hivju spoke with The Hollywood Reporter about milk, mayhem and more. Pro-tip: This is best enjoyed imagining Hivju in full Tormund mode, big belly laughs and all.

When were you told that Tormund was still alive, and that you would be returning for the final season?

A couple of months before we started shooting. The shoot was delayed a bit because we wanted the winter weather. This shoot was nine months instead of six months, so it was the longest shoot in Game of Thrones history, with the shortest amount of episodes. I didn’t really think I was going to die. I don’t remember anyone telling me that, but … Game of Thrones is too fond of their deaths to give me an offscreen death. (Laughs.) If they want to kill somebody, they want some emotional impact out of it. But I tried to keep it a secret. Years ago, I was at a Game of Thrones bar in Atlanta. When Rory [McCann, who plays the Hound] came back after sitting out for a season or two, the audience was so happy. I was insisting on keeping [Tormund’s survival] a secret, even more so than HBO. I really wanted it to be a reveal. And then they placed me in the trailer!

They blew your cover.

I know! (Laughs.) I hadn’t done an interview in a year, and suddenly, I’m in the trailer! What’s with that? But I felt a lot of love after last season. I saw it a lot on social media: “If Tormund dies, we riot.” And then I saw: “If Tormund doesn’t live and doesn’t get to make giant babies with Brienne, we riot.” (Big laugh.) I thought that was hilarious. But I felt the love, and I felt the will to keep him alive.

In this past week’s episode, we learn how Tormund earned the name “Giantsbane.” What a story. What did you make of it?

It’s been a while since I’ve read the books, but I think it’s a true story. They used to call him “Giantsbabe.” It was a mocking name. In the books — and you have to check this out — I believe it’s the same story, but it doesn’t say it as something he’s bragging about. It’s the story of how he got his name, and they thought of him as “Tormund Giantsbabe,” because this giant mother took him and nursed him and he couldn’t escape, because she was taking care of him as if he was a baby. They were mocking him, and that’s how he got the name. It was Tormund himself who changed the name to “Giantsbane.” The part where he killed a giant? That might be a lie. But the fact that he was nursed by a giant? I would say it’s about 67 percent true — and that’s nothing to brag about. (Laughs.)

How did the scene play out in the room? I can imagine a lot of laughter.

Well, as you know, you do it 40 times. I insisted on making it as “Tormundish” as possible, every time. (Laughs.) For me, it’s like … this Jaime guy, I don’t know. Tormund has picked up something about this Jaime guy. After Tormund comes to the castle, I think he’s been watching [Brienne] as much as he can. He’s picked up that this new guy, this “King Killer,” he’s competition. It’s all about Tormund trying to push him down in order to push me up. But it doesn’t work. It doesn’t work! (Laughs.) It never works in life to push someone down to get yourself up. But it was hilarious. I had a lot of fun with it. We laughed a lot.

How much milk did you drink?

I didn’t drink much. Most of it went into my beard. It smelled like milk for a century. (Big laugh.) 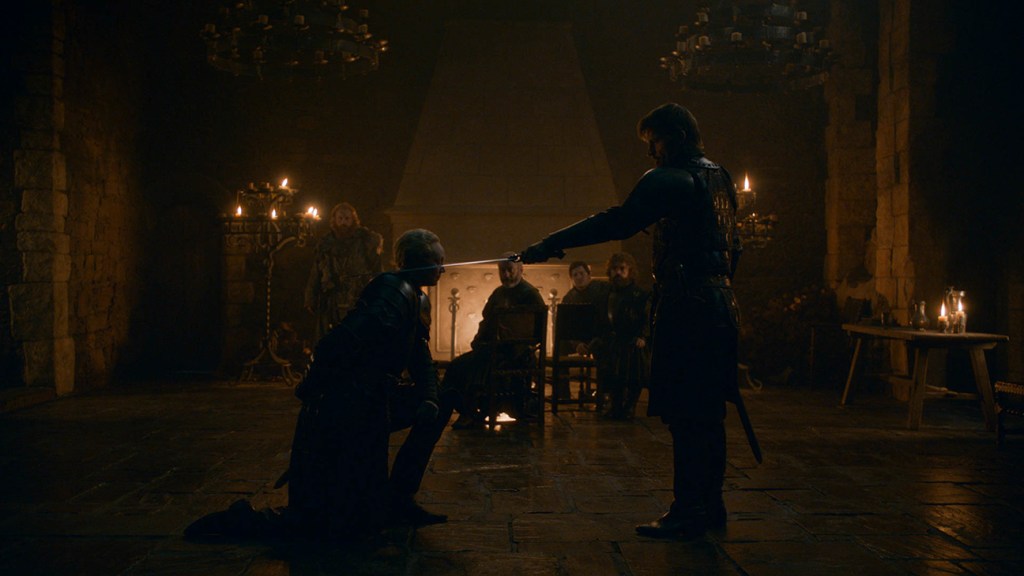 Tormund loves Brienne and feels competitive with Jaime. How do you feel he reconciled these things in the scene where Jaime knights Brienne?

On behalf of Tormund, I chose to feel that the acknowledgment she gets is much, much more important than the rivalry. For me, in that moment, she blossoms. When he sees her smile for the first time and he sees how much this means to her? He really loves this woman. He starts the slow, American clap. (Claps and laughs.) I really think he was very touched. You see him smiling like a baby. I think he’s just so happy. It was very touching when we shot it. Everybody cried on every single take. That’s the beauty of the show. You have this arc of eight seasons. This woman has tried to find respect and a place in the world, and suddenly, she accomplishes her greatest dream. After nine years of following this woman and suddenly she’s there, fulfilling her deepest wish? I think it’s beautiful. She did it so fantastically. It was brilliantly played by Gwen [Christie]. It was a very touching day.

Among the reasons why this episode felt special: it almost felt like the last happy hour of the series. Did it feel that way to you when you first read it?

I remember reading it at a huge rehearsal. We were like 50 people in the room, and the laughter was enormous throughout the whole episode. We had a lot of fun, reading that episode. I think the audience has deserved some warmth and light. There has been a lot of darkness. That’s the beauty of this: People really know the characters. Even the Hound! We have feelings for him. There are all these small details and looks, and it’s beautifully written by Bryan Cogman and directed by David Nutter. Because he had been on the show for such a long time, he really knows the characters, and it was a huge pleasure to work with him and to get to play with him.

'Game of Thrones' Final Season Podcast: Looking Ahead Toward the Winterfell War

When you have a build-up of seven seasons with so much pain and suffering, suddenly people can be nice to each other. It goes straight to your heart. It’s as my mother says: “When do we cry when we watch TV and cinema? We cry when people are genuinely nice to each other, and do something nice for another person.” There has been so much cruelty and selfishness for people in this show. I cried so many times in this episode when Jaime and Brienne meet, and even earlier in the episode when Sansa and Theon reunite. There’s just so much history. Somebody said that good drama is when you place two people in the same room, and the drama is existing in the room. This was the same. It happened so many times in these first two episodes, where you have two people who hug and you can feel and see the history.

More pain and suffering is on the way Sunday night. What can you tell us about the big battle?

I will say … I’ve worked a lot with [director Miguel Sapochnik], because we did “Hardhome” and “Battle of the Bastards” together. When you’ve starred in sequences like that, it’s like you’re climbing a mountain. Beforehand, we watch [pre-visualization] in a huge room. We watch a pretty good, animated version [of what we’re going to shoot], with lines and everything. Everybody was like, “Is this even humanly possible to pull off?” We knew we had 56 night shoots in front of us. We were going into two or three months of night shoots. That’s pretty intense, in terms of driving everybody crazy. (Laughs.) Miguel was the greatest commander in chief you could find. He literally had huge armies around him. He’s trying to make this all fit together. Some days, we were 900 people at lunch. It was just crazy. I haven’t seen the episode, so I really don’t know. But I think it will be pretty intense.

This story has been edited and condensed for clarity.