Welcome to Final Path, a regular feature leading up to the final season of HBO’s Game of Thrones. In every Final Path, The Hollywood Reporter‘s resident Westeros expert Josh Wigler will offer a character-by-character deep dive of their journey through seven seasons, as well as what can be expected in the upcoming eighth and final season. Up next: Varys.

“Power resides where men believe it resides. It’s a trick, a shadow on the wall — and a very small man can cast a very large shadow.”

It’s one of many delicious quotes from Lord Varys (Conleth Hill), one of the most masterful manipulators in the Game of Thrones universe. Unlike some of the other schemers, Varys is beloved without equivocation. In his earliest appearances, Varys’ motives were as enigmatic as the riddles in which he speaks. Through the seventh season finale, there’s very little doubt about his intentions: he’s a man who wants power for the people, and that means fighting for the side of the living.

But talk is cheap, as they say. When push comes to shove — when it’s time to act — what will Varys do? In the latest Final Path, we look back on the Spider’s crawl through the Seven Kingdoms, and explore some theories about how Varys’ philosophy will be put to the test. 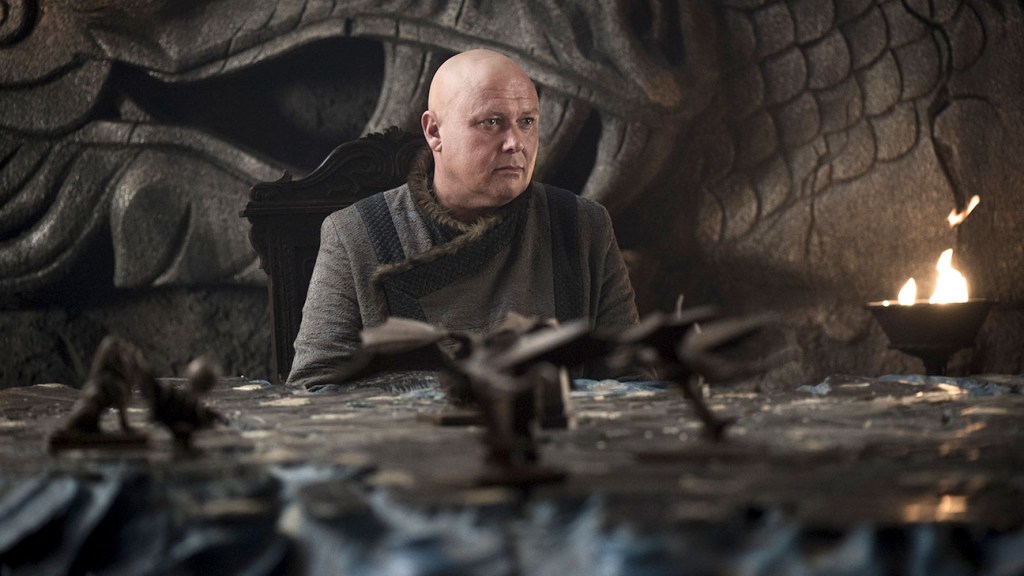 Names and Titles: Lord Varys, also known as The Spider, former Master of Whisperers in the regimes of the late kings Aerys Targaryen and Robert Baratheon. He currently serves the same role for Daenerys.

First Appearance: “Lord Snow,” the third episode of the series. He’s first featured doing what he does best: playing a role. Varys makes his debut opposite Eddard Stark (Sean Bean) during his first Small Council meeting in King’s Landing, offering perfumed yet hollow sympathies for the recent troubles sustained on the Kingsroad. A later season one scene with Ned is much more instructive for the overall Varys storyline.

Last Appearance: “The Dragon and the Wolf,” the season seven finale. Varys is one of the many men and women present at the Dragonpit meeting between the Targaryen, Stark and Lannister forces in King’s Landing. Before the scene begins, he walks alongside Tyrion (Peter Dinklage) and Bronn (Jerome Flynn), a fly on the wall as these two old friends meet. One can only hope it’s not the last time Varys shares the screen with Bronn; the potential banter is too much fun to leave untapped.

Best Friends: Varys has friends everywhere. How else to explain all the information that comes singing into his ears? It’s probably a stretch to say he’s friends with his “little birds,” the children spies who act as his eyes. It’s less of a stretch to look at Tyrion as a friend. Over the years, the two strategists have formed a genuine bond and affection for one another, leaning on each other during times of great crises. With White Walkers on the march, the crises are only just beginning.

Worst Enemies: Anyone who threatens the realm, which is a fairly broad swath of people with a lot of different contenders! Certainly, he’s no fan of Cersei Lannister (Lena Headey), nor was he too fond of Robert Baratheon (Mark Addy) before her. Varys and Littlefinger (Aidan Gillen) were often at odds, too, though their rivalry is a thing of the past now that only one of them still lives. Varys also has a long history of hating magic, and those who practice the dark arts, due to his traumatic childhood brush with a sorcerer. Speaking of which… 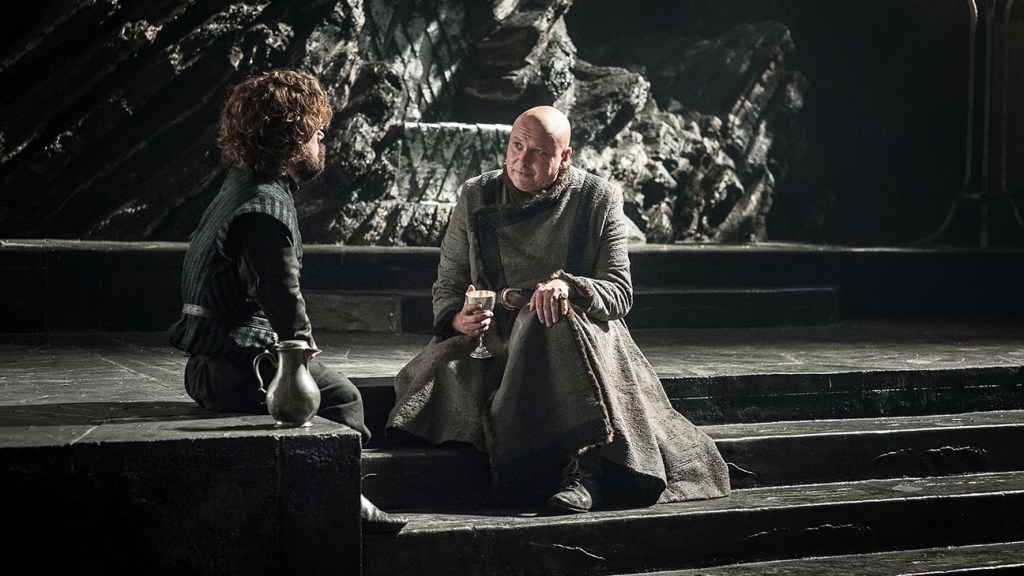 Best Kill: It’s not exactly a “kill,” at least not a confirmed one, but Varys’ deadliest act surpasses death in terms of cruelty and creativity. A long time ago, Varys told Tyrion the story about how he became a eunuch, losing his parts at the hands of a sorcerer. As retaliation, Varys boxed up the sorcerer and has kept him prisoner ever since. There has been no update on the imprisoned man since he was revealed to Tyrion. With only six episodes left, we assume Varys’ prisoner is dead — and good riddance.

Worst Wound: We don’t need to rehash his origin story as a eunuch any further, do we?

Critical Moments: In the early seasons, Varys was enigmatic to the point of threatening. It was not clear that he was a man we or any of the characters could trust. In hindsight, however, Varys revealed himself as early on as the first season’s seventh episode, when he visited an incarcerated Eddard Stark and advised him toward taking the black. “Tell me something, Varys,” Ned asked him bitterly. “Who do you truly serve?” Varys looked down upon the ill-fated Stark and replied honestly: “The realm, my lord. Someone must.” It was easy enough to question Varys in the moment. Now, we know much better: all the shadiness — the spies and whispers and games — all of it was in service of the greater good.

Unresolved Mystery: At Dragonstone, standing cliffside and looking out at the sea as the King in the North and his consigliere rolled into town, Varys met with the Red Woman Melisandre (Carice van Houten). His anti-magic stance well and fully known, it was no surprise to see Varys tell Melisandre that she should never return to Westeros… but it was a huge shock to hear her response: “I have to die in this strange country… just like you.” As a wise man once said: what up with that? 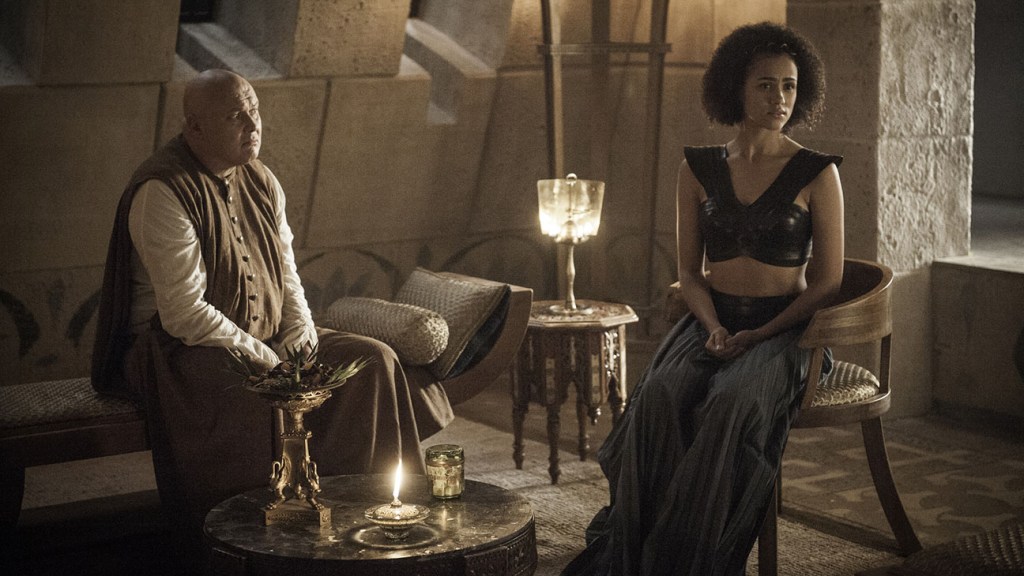 Final Predictions: What should we make of Melisandre’s prophecy? Is Varys doomed to die in the final season of Game of Thrones, or will this constitute one of the many times her visions of the future didn’t pan out as expected? It’s worth asking these questions, just as it’s worth steeling yourself for a heartbreaker if you’re a huge Varys fan…

Because, yeah. Varys is going to die.

Sure, everybody dies eventually. It’s not impossible Game of Thrones takes a page out of another HBO drama’s playbook and pulls a Six Feet Under, charting the future deaths of the beloved characters in an extended epilogue sequence. Maybe that’s how Varys dies! It would certainly be nicer than the likelier alternative. Sadly for Varys, the stage is well and fully set for a brutal but impactful demise. Let’s cobble it all together:

• Melisandre believes Varys will die in Westeros. One imagines she has seen his death in a vision.

• She has also seen Jon Snow (Kit Harington) in the thick of a great battle at Winterfell, which we always assumed was the Battle of the Bastards. It’s equally likely she has seen visions of the Battle of Winterfell, teased in the final season trailer.

• In the final season trailer, Varys is seen in the Winterfell crypts in the midst of the battle, taking shelter alongside common folk who aren’t up for the fight — people like Gilly (Hannah Murray).

• Varys is deathly afraid of magic. The White Walkers’ very existence is rooted in magic.

• Varys has sworn up and down that he wants nothing more than to serve the realm, to fight for those who cannot fight for themselves.

• The White Walkers could very easily breach the crypt, forcing a situation where all of the huddled commoners are fully doomed or can only be saved by the good grace of someone’s sacrifice.

Got all of that? Good — because you’ll see that all the ingredients are in place for Varys to stand up for the realm and die in the face of his worst fear, magic in the form of the White Walkers. It’s a true “put your money where your mouth is” moment, one that will eradicate any lingering questions about who Varys is and what he’s all about. What’s more, Varys’ sacrifice in the crypt of Winterfell would mean he dies in the presence of Ned Stark’s grave, fully closing the loop and making good on the declaration he made in a dark dungeon long, long ago.

Between the Melisandre prediction and all of the surrounding circumstances, we simply see no other path for Varys than vicious White Walker death — brutally sad, but a powerful end to a powerful character.

Last Hope: For Varys and Arya Stark (Maisie Williams) to enjoy a very solid high five over the death of Littlefinger. Also, for Varys to hang out with Lyanna Mormont (Bella Ramsey). Random request, but feels like a fun pairing.