Heading into the final season of Game of Thrones, with the exception of White Walker war veteran Jon Snow (Kit Harington), no one stood out as an obvious candidate to kill the Night King — which is ironic in hindsight, since No One killed the Night King.

Arya Stark (Maisie Williams) earned the prestigious honor of defeating the human race’s sworn enemy, removing the Night King from the game with some well-placed Valyrian steel. It’s the culmination of her character’s violent arc, which has seen her sticking various adversaries with the pointy end of one weapon or another, be it Needle or a catspaw dagger. Studying at the House of Black and White as one of the nameless Faceless Men, Arya’s transformation from No One into a very exceptional someone is as satisfying a story as they come. Where can she go from here but up?

You had to ask.

Before we plummet, let’s take a few more moments to linger on the bright side. At the moment, Arya’s star is very much on the rise. Observe:

• She single-handedly ended the White Walker war, saving every single human being in the Seven Kingdoms, whether they know it or not.

• At the least, everyone in Winterfell will soon know who saved their skins just as the jaws of death were about to clench the Northerners and their allies on all sides — whether it was in the very unsafe crypt or on the zombie-strewn battlefield. If nothing else, Arya will become an instant local celebrity, even more than what she already enjoyed as a daughter of House Stark.

• Among the dead on the Winterfell battlefield: Lyanna Mormont (Bella Ramsey), who first killed a giant in her own right. Speaking with The Hollywood Reporter, Ramsey said Lyanna would have supported Arya for the Iron Throne if the Lady of Bear Island had survived the fight: “I’m hoping she ends up on the throne. I don’t know how likely it is, but it would be fun!”

• It would be fun. It would make THR chief TV critic Daniel Fienberg a very happy man, given his official prediction for who winds up on the Iron Throne: Arya, wearing someone else’s face.

All fun thoughts! So why stop all the fun with a grim prognosis for the future? Because this is Game of Thrones, and we cannot have nice things.

Before the final season’s launch, in our Final Path prediction series, we put it out there that Arya would not survive Game of Thrones. Now that the Young Wolf of Winterfell has killed the deadliest villain in the Thrones universe, how can we possibly still hold to the idea that Arya will die? Because the Night King isn’t the deadliest villain in the Thrones universe. That distinction belongs to someone who hasn’t been featured since the final season’s premiere episode… 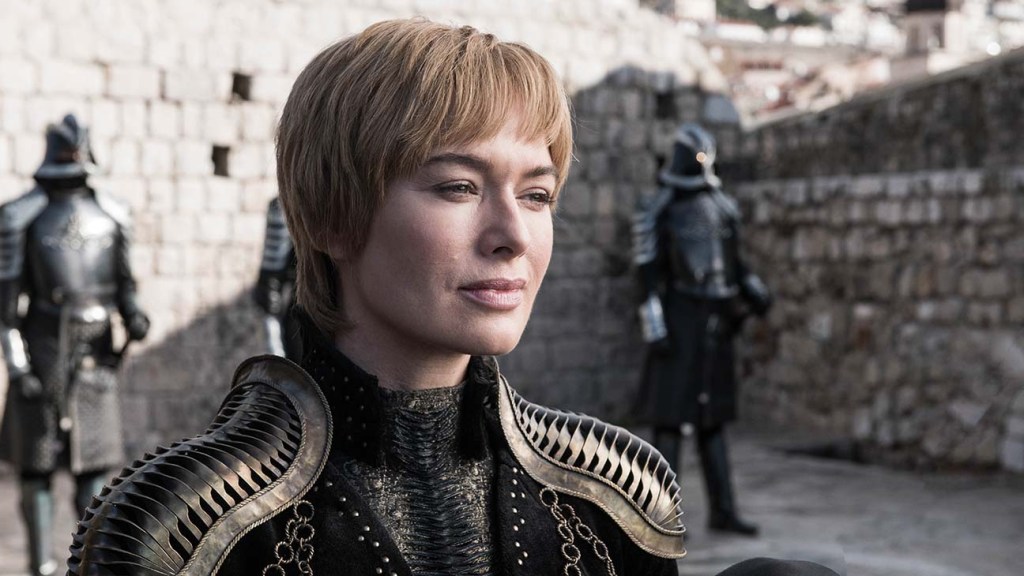 …Cersei Lannister (Lena Headey), the same individual who long ago stood in the way of Arya’s father Ned Stark (Sean Bean), and has since clawed her way into power with irrepressible dedication and creative ruthlessness. The Lion Queen was willing to decimate an historic King’s Landing monument and thousands of innocent lives just to annihilate a precious few enemies, winning the Iron Throne in the process. Since claiming supremacy over the Seven Kingdoms, Cersei has imprisoned and tortured enemies like Septa Unella (Hannah Waddingham) and Ellaria Sand (Indira Varma) in ways both physical and psychological, vicious enough to make even the late Ramsay Bolton (Iwan Rheon) stand up and take notes.

In killing the Night King with three full episodes still remaining, Game of Thrones has made a tacit statement about the true conflict at the heart of the series — and while it’s not all about one individual antagonist, Cersei nonetheless represents a form of power and fury that is bound to cause intense devastation before all is said and done. For those reasons, I feel more strongly than ever before that my preseason prediction will come true: Arya Stark will die either at Cersei’s command or at Cersei’s own hands.

'Game of Thrones' Final Season: What's Next After the Battle of Winterfell

As for Arya, it’s easy to see her walking right into one of Cersei’s traps. After all, she just killed the Night King; what possible harm could come from one wicked little Lannister? Few heroes in Thrones are all aboard their own hype train quite like Arya, and while it’s not without good reason, it’s dangerous all the same. Having saved humanity, Arya is likelier than ever to feel confident about crossing off the biggest name still left on her list: Cersei. But it’s a pursuit for which she’s likely to die.

How will it go down? An extensive theory awaits you here. Another possibility: Gregor Clegane, the Mountain that Rides. Hafþór Júlíus Björnsson’s hulking force of destruction still needs to battle it out with baby brother Sandor (Rory McCann) in the much hyped Clegane Bowl. For his part, through three episodes, the final season has strongly emphasized the Hound’s fondness toward Arya. What better way to fuel him into action against his older sibling than the Mountain protecting Cersei by crushing Arya Stark? Perhaps Lyanna Mormont dying in battle against a giant wasn’t just Thrones expressing a David vs. Goliath moment worthy of the Bear Islander’s legacy; perhaps it was a means of preparing viewers for Arya’s own end at the hands of the gargantuan Gregor.

It’s not something anyone wants to see. Arya has enjoyed some well-earned happiness and normalcy, both in the forms of killing the Night King and embracing the company of Gendry (Joe Dempsie). After so much suffering throughout the series, Arya deserves a happily ever after, such as one exists for any of these characters. But with her stock at an all-time high, there’s no easier way for Thrones to gut the audience and express its great statement on the nature of power in Westeros than by having the most selfish and cruel character in the series blindside the deadliest hero still standing, in a way that mirrors the first Stark hero to die because of a Lannister. It’s a flag we planted long ago, and we’re sticking with it now more than ever: Arya will die, and it will be Cersei’s fault.

Critic's Notebook: Why the Final Season of 'Game of Thrones' Can't Win