Jon Snow (Kit Harington) and Daenerys Targaryen (Emilia Clarke) are on the same screen (if not on the same page), but it’s not all sunshine and rainbows on Dragonstone.

Before the King in the North and the Mother of Dragons’ fateful meeting, two other players had an important conversation about destiny: Varys (Conleth Hill) and Melisandre (Carice van Houten), the latter of whom announced her plans to leave Westeros behind for Volantis. Varys, never one to be shy in his disdain for magic, offered Melisandre some free advice: “I don’t think you should return to Westeros. I’m not sure you would be safe here.” In return, Melisandre offered a chilling promise of her own.

“I will return, dear Spider, one last time,” she said. “I have to die in this strange country — just like you.”

Have we ever seen Varys so unsettled? Actually, we have! He wore that same expression of deep torment and painful confusion the last time he encountered a red priestess: Kinvara (Ania Bukstein), who came to the great city of Meereen last season to pledge her support to Daenerys‘ cause. During that meeting, Kinvara evoked dark memories from Varys‘ past — memories he would likely prefer to stay buried, ideally in a coffin with a captured sorcerer trapped inside. She spoke about how when Varys was castrated as a child, he heard voices from a flame. She asked if he remembers what the voices said. Varys never offered an answer, but the look of horror on his face spoke volumes.

Now, we have another instance of Varys looking completely stunned by the words of a red priestess, and the content of those words is even more severe: Melisandre is promising Varys that he will die in Westeros. Sure, it could be innocent enough; all men must die and all of that. But the way Varys reacts suggests that Melisandre’s promise aligns with the voice he heard in the fires long ago. In other words, as much as one hates to say it, things are not looking promising for Varys‘ longevity. The Spider does not look likely to spin his way out of Game of Thrones alive. 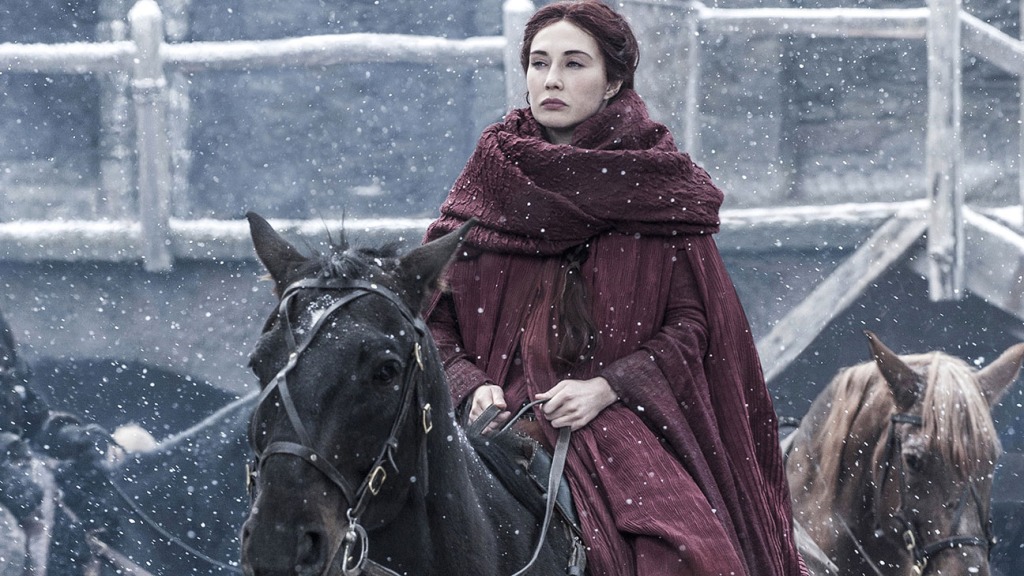 Of course, Melisandre also offers a curious detail about her own demise. She seems to believe that she’s destined to die in Westeros. While she often misreads what she sees in the flames, much of what she sees actually does come true in some shape or form. (See: Jon Snow battling at Winterfell after all, his temporary death notwithstanding.) It’s a good bet that Melisandre isn’t far off the mark on the whereabouts of her own death, then, if not the how, when or why.

Your mileage may vary on how to feel about Melisandre’s impending doom (how does one reconcile her essential role in bringing Jon Snow back to life with her decision to burn a child alive?), but there’s at least one Valyrian steel lining: It buys some time for Arya Stark (Maisie Williams).

Back in season three, Arya and Melisandre temporarily crossed paths. The red priestess promised the young wolf: “We will meet again.” Many fans expected they would reunite at some point this season, since Arya was back in Westeros and Melisandre was heading south from Winterfell. Given that Arya is now heading back home for a family reunion, and that Melisandre is leaving the Seven Kingdoms temporarily, it’s not looking likely that these two will intersect before the season ends.

So, there’s a promise on the table that Melisandre and Arya will meet, and there’s a promise on the table that Melisandre will die in Westeros, even though she’s about to set sail for one last Volantene adventure. We’re likely looking at Melisandre surviving long enough to die another season — and there’s only one season left to go. And since Arya Stark has to survive at least long enough to see Melisandre one more time, she’s all but guaranteed to survive until that fateful final season encounter. In other words, this latest prophecy is bad news for the Red Woman, yes — but it’s great news for No One.