Dragons were gone from Westeros for many years, before Daenerys Targaryen (Emilia Clarke) made them an undeniable reality in the blazing conflict known as the Loot Train Battle. Until then, rumors of the Dragon Queen and her fire-breathing companions were exactly that: rumors, out of sight and out of mind for the vast majority of the Game of Thrones cast, except for those lucky (or unlucky) enough to witness them firsthand.

Among the luckier witnesses: Jorah Mormont, the no-nonsense warrior played by Iain Glen. The exiled Westerosi was one of the first to lay eyes upon Daenerys‘ dragons shortly after their birth, and he traveled alongside them for many seasons before once again being forced into exile, this time from the Targaryen army. Now, after a traumatic journey back to Dany’s good graces, which involved a very brief battle with the deadly disease known as greyscale (thanks for the shave, Sam!), Jorah is back on the right side of the war — just in time to witness the death of one of the dragons he saw birthed to life so long ago.

For more on the loss of the dragon and Jorah’s journey, The Hollywood Reporter spoke with Glen, who gave his thoughts on what was involved in bringing the ice lake battle to life, Jorah’s growing admiration for Jon Snow (Kit Harington), coming to terms with the reality of his relationship with Daenerys, what was involved in the greyscale operation scene earlier this season, and more.

How 'Game of Thrones' Delivered the Season's Mother of Dragon Moments

Jorah Mormont was there for the birth of these dragons. What’s going through his mind as he witnesses the death of one of the dragons?

Probably the scale of what they’re up against. I think for Jorah, the dragons have always been to some degree indestructible, having seen them grow from these baby newts around the naked body of his adored queen, into these vast killing machines. It turns out, they’re vulnerable. There’s a question mark there. I think he’s feeling a fear of the consequences. I think he’s also very sensitive to how they’re her children in her mind. She has a very profound connection with these dragons, which goes right to the center of her soul. He’s very aware of the consequences for her.

Is it difficult at all, to embody Jorah’s feelings in the moment of watching a dragon die, when there’s no actual dragons to react to?

It’s definitely been a constant element of the Thrones world that I’ve occupied. Over the course of the 80-odd hours, there have been many sorts of things, of course. But one central thing…we spoke about the birth of the dragons, and they arrived at the end of the very first season. Of course, I wasn’t looking at that. You become accustomed to it as an actor. If you have a director who can bring it to life for you, and they’re much more able to do that by showing you previz of fairly developed material, so you’re not just looking at a green or orange ball. You talk through it. Usually, these sequences, you have time to work into it a bit. It’s not ideal, but it’s definitely part of the larger-than-life and beyond-our-ken aspect of filming Game of Thrones.

Jorah and Jon Snow enjoy some time along together, in which Jorah rejects Jon when he offers back Longclaw. He mentions how he hopes to see Longclaw passed down to Jon’s children. Does he know Jon and Daenerys are becoming close in that way, and is this his way of offering his approval?

I think so. I don’t know, but I do think in some way, emotionally, Jorah has moved on from hoping, really, for any physical reciprocation. His love for her and his adoration of her and her abilities and capabilities remain undiminished entirely. But I think having gone through the nightmare of her rejection, and then having gotten very dangerously ill, for her to offer her forgiveness and plead with him to find a cure for himself so he could be back by her side, I think having gone through that whole traumatic emotional revolution, he’s at a point where he’s just glad to be in the fold and back where he feels he belongs: beside her. I think there’s an element of him feeling, “You’re the man to be guiding us forward. You’re going to be a part of the plan.” But I think it’s also a family thing. He was rejected by his father because of what he had done, and why he was exiled right at the beginning of the story. Fundamentally, he’s a very honest man. He doesn’t feel it’s right, that he should be gifted this back by Jon, who was gifted it by Jorah’s father who he had lost favor with. He’s being very honest about it. He’s tacitly showing his appreciation of Jon, that he believes he’s a leader. He’s admired him. They’re getting to know each other. I think there are many things happening, but I do think it’s at least connected to a physical acquiescence. 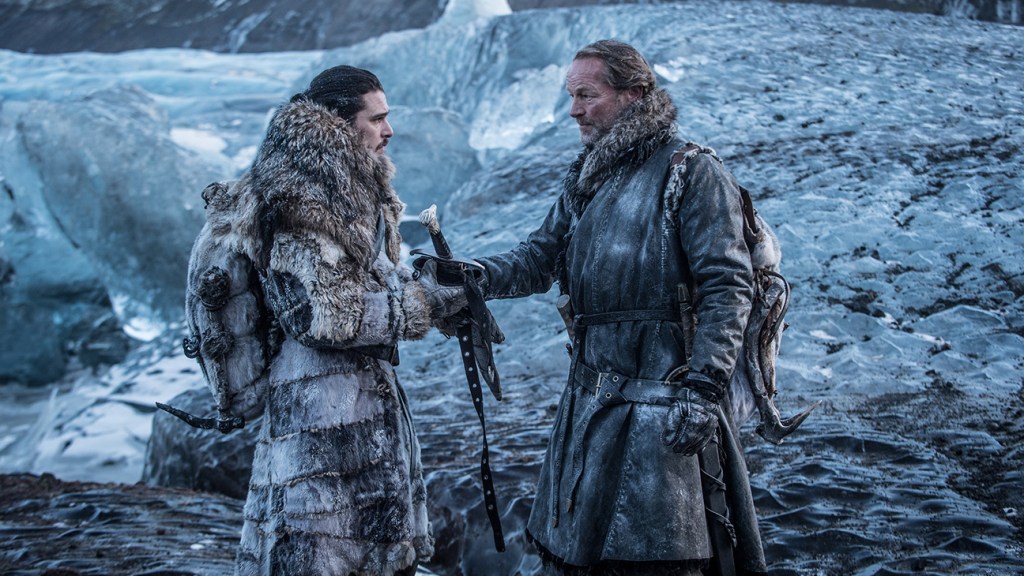 Can you talk through your side of wearing the greyscale makeup, and filming the scene where the infected skin was removed? I won’t forget the howling pain of Jorah Mormont anytime soon, and I’m sure you won’t either.

Yeah, it was a hard scene to do. There was a pragmatic reason for that. For that full-body makeup, it took about three filming days where we were in the operation, or post-operation, where that upper body was revealed. That’s a long process. It takes about seven hours. You’re getting up at 1 o’clock in the morning, or something like that, for seven-hour makeup. You’re a bit spaced. When everyone comes in to start turning over at 8 o’clock, you’re already well through your day. But there’s a marriage between what you need to do in your scene and what’s required to get you there. You’re a bit spacey, you’re a bit trippy. I suppose it’s always easier to access those things as an actor, or at least as I’ve found them, if you’re tired, if you’re exhausted, if you’re spent. Sometimes, I’ll do it deliberately. If I have an emotional scene, I’ll deliberately not sleep the night before. Just little things you pick up along the way.

Then there’s the actual prosthetic itself. I thought they exceeded themselves. It was a prosthetic on the prosthetic, where they had to create layers they could lift, and all of that disgusting, oozy substance was placed in specific places where they knew they were going to have to have camera angles, and they would know where they needed to show it. We had two days of filming that. You just have to go there. You offer different things up for the director and you hope they like the possibilities. It’s been a long journey that’s got Jorah to that point, and it’s what we all have as actors on Thrones: there are moments where your character lands, and then there are areas where you’re floating for a bit before your storyline lands again. You just want to nail those areas in the story where it’s zoning in on your storyline. I loved performing those scenes.

And John [Bradley, who plays Sam] is a lovely guy. One of the huge pleasures of this season, for me and I think for a lot of us, is that we’re finally getting to act with each other. All of these characters in very different storylines, we’re finally overlapping, as you saw in that scene and as you’re seeing in the scene from this week. That was lovely. It was a chance to work with a whole bunch of actors I hadn’t worked with before, and we had a ball in Iceland for many months.

Turning back to this episode, and the matter of the death of the dragon…if Jorah is considering the scale of what they’re up against when he watches Viserion die, should we expect him to be terrified when he sees Viserion’s new form?

Absolutely. Absolutely. Listen, I’m awed, really. I’m like a fan when it comes to what Game of Thrones pulls off. I kid you not: when I read these episodes, way back when, I immediately wrote to Dan and David and said I thought they were the best episodes they’ve written as a group for a season. Everything just accelerates forward. There’s no sense of treading water, no sense of milking this. I really admired the speed with which they propelled this story forward, everyone’s stories. One aspect of what’s extraordinary about the scripts, generally for Thrones but this year in particular, I’ll read the words on the page and think it’s completely unfilmable. I don’t know how we can manifest that. And it’s taken a few years of confidence coursing through the body of Thrones to make all aspects of the production feel they can pull it off. If we have dragons nosediving into an ice lake, and then come out? Then we’ll realize that.

In this episode, the vast majority of [the battle scenes] were shot on a concreted quarry that was redesigned to look like a vast ice lake. We were there over the course of many weeks. The body of the dragon was brought onto the lake that we eventually flew off on. And I’m like a fan in how awed I am about how they pull that off. Every department has to be completely on their mettle. I’ve done many things over the course of too long a career, and it’s one of the few things I do watch from beginning to end, every single episode. I haven’t seen this one yet, because of the difference in American and British time and [we’re speaking] very recently [to the episode’s airing], but I can’t wait to watch. I love being able to say to the entire team the next time you see them, “That was really amazing work.” I’m constantly surprised and delighted with what every department can do. That doesn’t really answer your question. (Laughs.) But episode six in particular, on paper, looked like the most unfilmable of the lot.