[Warning: This story contains spoilers for the season seven finale of HBO’s Game of Thrones, “The Dragon and the Wolf.”]

With so much time spent dwelling on the death of Littlefinger (Aidan Gillen) and the fall of the Wall, few people have stopped to consider the very grim possibility that two other fan-favorite characters met their maker in the season seven finale of Game of Thrones.

The final scene of the episode, called “The Dragon and the Wolf,” featured Tormund Giantsbane (Kristofer Hivju) and Beric Dondarrion (Richard Dormer) helplessly watching as the Night King, riding an undead Viserion, pounded the wall with a steady stream of ice-blue zombie-dragon fire. The Wall collapses shortly thereafter, but viewers never see what exactly befalls Tormund and Beric. Since we don’t see their bodies, should we assume the two are safe? After all, Tormund narrowly avoided what would have been an incredibly memorable death in “Beyond the Wall,” while Beric has been killed off and resurrected multiple times for some unknown predestined purpose. Was that purpose nothing more than being a witness to the greatest act of destruction Westeros has ever known, or is there more life in the man yet?

Unfortunately, anyone searching for clarity shouldn’t look to Kristofer Hivju for comfort. Though the actor was as jovial as ever when he spoke with The Hollywood Reporter about the season finale, he stopped short of confirming or denying Tormund’s fate. Here’s what he said about shooting the final scene, the numbingly real possibility that his time on Game of Thrones has reached its end and more.

How are you feeling?

All good? Even though we have no idea what happened to Tormund at the end of this episode?

When we spoke last week, I told you I thought Tormund would be safe from now on, since he survived what would have been such a memorable death in “Beyond the Wall.” Did I curse you?

You made this happen. You made it happen. (Laughs.) I honestly don’t know. It doesn’t look good though, does it?

Have you been told whether or not you’re going to be in the final season?

If Tormund and Beric survive this encounter, will they be best friends forever moving forward? Few quicker ways to bond two people together than surviving the fall of the Wall!

Realistically speaking, if you’re on top of an ice wall and it’s many hundreds of meters tall … I was a competitive climber when I was younger, and that fall, I must say, it doesn’t look good, man. (Laughs.) It really doesn’t look good. I saw an Instagram post somewhere of a guy shoveling through the snow and screaming, “Tormund! Tormund!” (Big laugh.)

That’s because people will be very upset to lose these characters in this way, and not even get a chance to actually see them go out. If this is the way Tormund dies, are you satisfied with that?

If this is my way out … well, it’s the huge cliffhanger of the season. So, in that way, that people might have to wait two years to know whether he’s dead or alive? If I was [showrunners David Benioff and Dan Weiss], and I wanted to kill Tormund and Beric off, I wouldn’t end the season with the death. I would end it with the cliffhanger. So, I understand that. But I wish he could have whispered something into one of those crows’ ears before it happened. But, you know, when the Wall is down, they won’t need the Night’s Watch or the Free Folk at the Wall anymore. It’s a hell of an ending.

What was it like to read the fall of the Wall for the first time, knowing Tormund was right in the thick of it?

The scene was very short. You came to the end of the script and it was like: “And then Tormund and Beric see the Army of the Dead. The dragon takes down the Wall.” And it was like, “What?” (Laughs.) Now, everything’s turned up. Now, it’s real. The fun of it is that the very first episode, the very first scene, you see wights. Now, after seven years, finally, they are coming through. And that’s scary, man.

In terms of filming the sequence, one imagines it was very heavy on visual effects, but director Jeremy Podeswa stressed that there was a lot involved practically. What was it like to film for you?

Practically, we had real crows, and not just Night’s Watch people. We had real, actual birds. So, “Bran” was there. That was amazing. They built an enormous set. It felt like really being at Eastwatch. Of course, everything was surrounded by green screens, but I had seen the Army of the Dead, so it was very easy for me to imagine what was coming our way, what was going on down there. 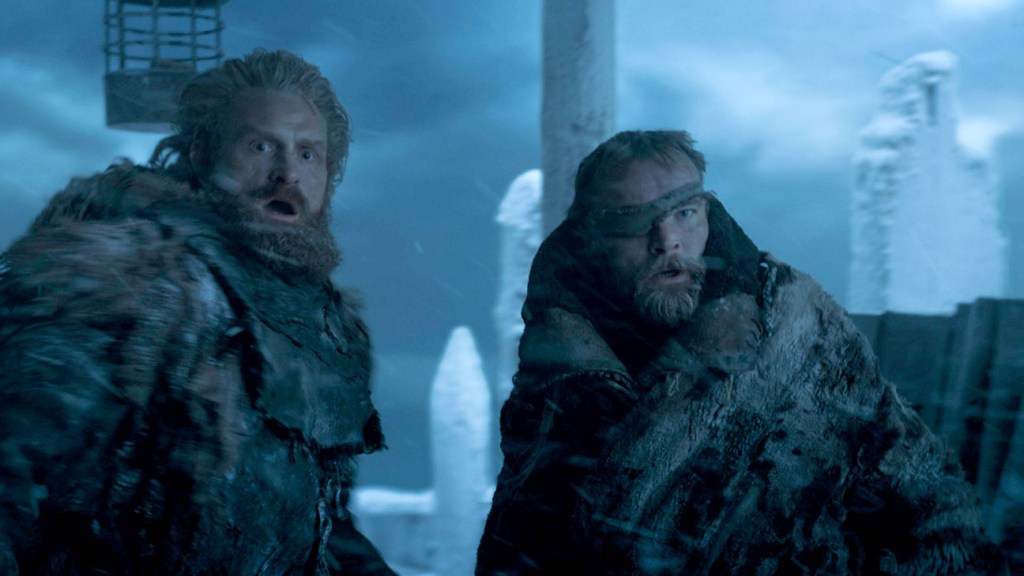 Last week, when we nearly saw Tormund die and get dragged into the ice, we saw him more afraid than we had ever seen him before. Does that fear pale in comparison to what he must be feeling when he sees the White Walkers approaching the Wall?

Definitely. As I said then, it’s a flashback to Hardhome. He knows what this threat is and what you become. To see the Army of the Dead coming to the Wall is one thing. But to see a zombie dragon with the Night King upon it? That’s something you have nightmares about. It’s really frightening.

What does Tormund make of the fact that a dragon he watched die just a few days ago is now suddenly alive and part of the Army of the Dead?

If I can analyze that moment, it’s hopelessness in the highest degree. I don’t think Tormund, when he sees it, thinks that they’re going to have a chance at all. When Cersei pulls her army [from the agreement], they won’t have the numbers at all. It’s going to get interesting.

As a wildling, Tormund was never exactly fond of the Night’s Watch, and not big fan of the Wall. But even still, experiencing this massive structure’s collapse, he must be in awe of it as a testament to the White Walkers’ strength, right?

I know in the books, there’s a kind of curse [on the Wall]. I don’t think David and Dan have included that element, the curse on the Wall. But now, it’s actual. The zombie army is burning this thing down. It’s the worst thing that could happen. He knows all the links of how it did happen.

Assuming Tormund survives, what do you think he’ll make of the news that Jon Snow (Kit Harington) is the heir to the Iron Throne?

When they called Mance Rayder the King Beyond the Wall, Tormund laughed about that. I think even Mance Rayder laughed about that. The thing with the Free Folk is that they don’t have kings. That’s the whole point of being free, that you don’t have a ruler. If they should meet again, I don’t think it would change Tormund’s view of Jon. I don’t think bloodlines giving you the right to the throne is a concept Tormund will embrace. But, that said, I think if Tormund has to choose a king, he would choose Jon. There was a line in [the penultimate episode] where Tormund asks, “How many people had to sacrifice their lives and die because Mance Rayder didn’t bend the knee? How many people died because of his pride?” I don’t think Tormund is a knee-bender, but if he had to bend the knee, he would bend it to Jon. But then Jon has bent the knee to Daenerys. So, who knows? I don’t think he believes in the concept. Tormund believes in a good handshake!

If this is the end for you on Game of Thrones, what has your time on this show meant to you?

It’s been life-changing in many ways. Of course, it has brought an extreme amount of attention. But for me personally, to have the possibility to play a character I love so much and have been able to explore and has gone in so many unexpected directions and has become a more and more three-dimensional figure, that has been a huge pleasure. To share so much fun with all of my colleagues has been a fantastic experience. I have so many new good friends and so many fantastic experiences. It’s been such a bond to do this with so many actors who just enjoy the work. My main priority has never been the fame. It’s been the craft of acting. Many of the actors on Thrones have theater backgrounds, so they are all so good. It’s been fantastic to be part of it.