[Warning: this story contains spoilers for the season-seven premiere of HBO’s Game of Thrones, “Dragonstone.”]

It’s just Sandor Clegane’s luck he would end up with a band of fire worshippers. Almost seems like divine justice.

Rory McCann’s take-no-nonsense brute of a character stood front and center in the Game of Thrones season- seven premiere’s most quietly emotional storyline. In one of the last acts of the episode, the Hound and the Brotherhood Without Banners seek shelter from the winds of winter inside a cabin — the same cabin belonging to the farmer and daughter Clegane robbed in season four’s “Breaker of Chains,” when he and Arya (Maisie Williams) were seeking refuge in the aftermath of the Red Wedding.

'Game of Thrones': How the Season 7 Premiere Sets the Stage for the Endgame

Clegane might not be a big believer in magic, but he predicted the future all the same: the farmer and his daughter were dead come winter, their bodies huddled and frozen in a corner, not far from where the Hound left them. It’s a moment that forces Clegane to literally confront ghosts of his past, paired with a moment that forces him to face the ghosts of the future when Thoros of Myr (Paul Kaye) convinces him to stare into a fire, so that he may see visions of their destiny. The Hound, famously afraid of fire and famously cynical of anything too far afield from reality, relents and peers into the flames — and is promptly astonished by what he sees.

“Ice. A wall of ice. The Wall. It’s where the Wall meets the sea. There’s a castle there,” he whispers. Fire crackles, briefly startling him, before the allure of what’s in the flames overpower his fears. “There’s a mountain. Looks like an arrowhead. The dead are marching past. Thousands of them.”

In showing someone as skeptical as Clegane so overwhelmed by such a definitive display of magic, Game of Thrones drives home the point Beric Dondarrion (Richard Dormer) is trying to make: there’s an inevitability about what’s coming next, whatever it is. Read on for what McCann told The Hollywood Reporter about what’s coming next for Clegane, as much as he can say — including some hype for the “Clegane Bowl,” the fan term for the (hopefully) inevitable battle between the Hound and his brother, the Mountain, played by Icelandic bodybuilder Hafbor Julius “Thor” Bjornsson.

It was a big premiere for the Hound. Congratulations on the episode.

Thank you, that’s very kind. I managed to watch a little bit of it. The first thing I thought when I saw the Brotherhood arrive, going through the snow toward the farmhouse, I was chuckling to myself, because even though we all look very cold, I remember it was actually quite a nice day there. I was actually sweating at the time!

They just made it look very cold?

Yeah, they’re very good at that. (Laughs.) All of that snow is paper with giant fans blowing in your face. Sometimes, you can’t understand what you’re saying to each other.

How do you use that in a scene like this, which is really about the Hound facing the bitter cold of his past — and here you are, in the sweltering heat?

I had probably been up for six or seven hours already. I’m in a grumpy mood anyway before I walk on set, because I feel like I’ve done my day already before the other actors arrive, because it takes so long to put my face on. (Laughs.) But I thought it was fantastic, going back to the same cottage that the Hound had visited before. It was quite a change of things through the Hound’s character, just in these few seasons. The development in him. The change in him.

The Hound began Game of Thrones as such a brusque and violent man, and then he went away for a while. Some of those aspects of Clegane aren’t going to go away, but he’s somewhat softer now. What are your thoughts on his transformation, since returning to the show?

I feel in a way, and even when he was with Arya, in a way he’s been looking for peace. He’s almost maybe looking for faith, and trying to understand the Brotherhood Without Banners and what the Lord of Light is. I don’t think he understands it totally, not yet. He’s trying to get into the heads of the guys he’s around. He’s becoming more human, I feel. He’s coming back to that farmhouse and seeing what he’s done. He sealed their fate, the way he left them last time. They may have died anyway, but the character we see now is more apologetic and has more remorse for the dead. He buries them. He even tries to do a prayer for them, but he can’t remember it.

It was a great Easter egg for the fans of the book, seeing Sandor as the gravedigger…

Essentially a wink and a nod to the fans, in this case to the theory that Clegane didn’t die in the Riverlands, but was instead serving as a gravedigger on the Quiet Isle.

Yes, that’s right. That was the general theory. I think it was definitely a nod, which is right. There was a rumor when the Hound went away that he would come back as that gravedigger. It was a wonderful moment. 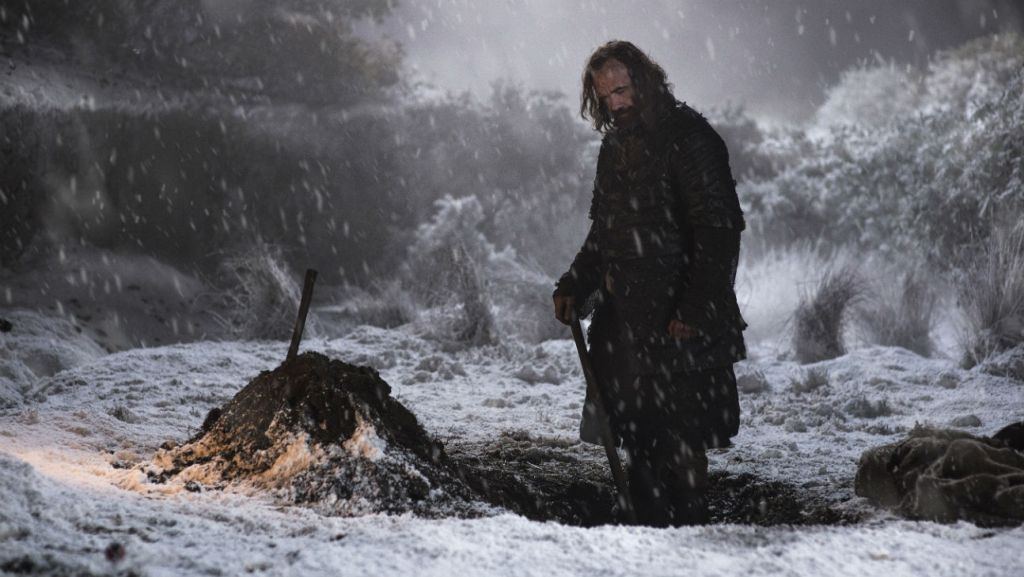 Another great moment is when the Hound stares into the fire. It’s the thing he fears the most, but the power of what he’s seeing in the flames is more powerful than his fear. What do you remember about shooting the scene?

I remember it was bloody hot by that fire. (Laughs.) I was roasting over it. There was comedy there, for about two seconds before it was the Hound really seeing the truth, maybe seeing the future. Maybe he has powers. Maybe he does have a link to fire. It was a 12-hour day in that barn. I didn’t even know at the time [how it would play]. I thought you would see something in the fire as well. I didn’t realize you would just be watching the Hound’s reaction. I was almost imagining that I was seeing television for the first time, and I can’t believe I’m actually seeing moving pictures in a flame. That was what I was hanging onto: this surprised shock, and the “Oh, my god” of what’s going on, and maybe being on the right path. Maybe I am part of this bigger thing.

I was also laughing about that scene before we enter the farm, when the Hound is taking the piss out of Thoros‘ top knot. That was absolutely hysterical. We don’t see the scripts until quickly before we start shooting, and I hadn’t seen Paul Kaye in quite a while. We met on set, and he was shaking his head going, “David and Dan, what a bunch of bastards!” In real life, he was wearing a top knot, and he was going slightly balding, and this ruined it for him! (Laughs.) Now he’s shaved his hair off.

An unexpected casualty of this episode: Paul Kaye’s top knot.

That’s exactly right. He has a new look now. (Big laugh.) We ended up having a right laugh. We’re all reasonably good musicians. After that scene, we actually formed a band: the Brotherhood Without Banjos.

Incredible. What did everyone play? Clearly no banjos.

Richard Dormer is fantastic on the ukulele. Paul Kaye is great on the guitar. We all sing.

We’re definitely going to do a couple of wrap parties at the end. It would be rude not to. But maybe we should go on tour. Possibly Game of Thrones the musical.

People really loved seeing the Brotherhood together, and the dynamic you have with both Richard’s and Paul’s characters. It feels like there’s an epic quality to the time these men are going to share together, however long it lasts. Does that sound right to you? Does this story take on an epic tone?

Absolutely. I can guarantee you that that’s what’s going to happen. I can guarantee you that. It’s just going to go up, up and up. You can feel that something’s brewing. They’re not splitting up. They’re obviously not the best at poems. But they’re on a mission. They’re all going together. I think the Hound will chill out…. I think that’s going to be the thing he’s going to be thinking about for the next few episodes: pure survival in the fight against evil.

A lot of time has passed since the Hound last saw Arya. They have both changed greatly since then — or perhaps Arya has just gone even further in an already dark direction. How do you feel he’ll react if he ever sees her again?

Do you think the Hound sees a bit of himself and Arya when he looks at the farmer and his daughter?

Yeah. He could be thinking about that vulnerability. He’s concluding, really, that he did the wrong thing. He’s remorseful now.

Hey, how about that!

Can you at least say if you have met Thor, who plays the Mountain, in real life?

Oh, yeah. I’ve met him a couple of times. I’m in Iceland a lot. I have friends up there. I was just sailing with an Icelander for the last couple of weeks actually, who worked on the show. So I’ve met him a couple of times, out and about anyway, at gyms and stuff… which is quite funny, actually. I’ll make sure no one is about, and then I’ll go up to him and go: “Alright, man. You and me, brother. When’s it going to happen?” But to be honest, we don’t know. We don’t know.

Hey, if it ever happens, my god that man is big. He has arms the size of my legs. (Laughs.) If the Clegane Bowl ever happens, I really better start training now.

'Game of Thrones': 7 Key Scenes From the Season 7 Premiere