Entering “Beyond the Wall,” few characters looked likelier to meet their maker than Beric Dondarrion, the frequently killed and frequently resurrected Lightning Lord played by Richard Dormer. After all, what was one more death for a man who has met the Stranger six times before?

Of course, then, even with the narrative odds against him, even with destiny suggesting otherwise, Beric managed to cheat death again. The Brotherhood Without Banners’ founding member managed to escape the penultimate episode of season seven with his life intact, thanks to an efficient use of his fiery sword, not to mention a last-minute assist from some fiery dragons.

Sadly, fate wasn’t as kind to one of Beric’s closest companions: Thoros of Myr (Paul Kaye), the only one of the Eastwatch elite to pass away during the expedition. It’s somewhat comforting, ironic even, that at least the fire priest was allowed to drift off into a frozen slumber, with his best friend Beric on hand to send him off toward the Lord of Light.

For more on Beric’s battle against the dead, The Hollywood Reporter spoke with Richard Dormer and learned what’s next for the character.

Are you as surprised as I am that Beric survived this episode?

No. (Laughs.) No, I think Beric’s still got something he has to do. I think he’s still in the game.

When you were reading the script for “Beyond the Wall,” what were your expectations? Did you feel like the end was near for Beric?

It’s weird. Call it a sixth sense, but I didn’t think Beric was going to see his end this season. I just think that he could do so much more if they keep him alive. I’m really pleased that he’s still going, really. I’m really pleased.

Do you think Beric is at all surprised he’s still alive? Destiny was drawing him toward the Wall. Did he expect this mission would be the end of the line?

I think Beric is in a constant state of bewilderment as to why he’s still alive. I mean, he’s died six times! Every day he wakes up is a surprise to him. I don’t think he sleeps that well, anyway. He probably only manages to cat nap, because he’s just haunted by every time he closes his eyes. He always thinks he’s going to that place again — that very dark place, to death. I think he almost feels resentful of other people who can die. But he knows he has a purpose. He follows his God, and so he will come back as many times as R’hllor wants to bring him back. He’s a soldier of God, let’s say.

Is Beric fearless in the face of death? Does he have any fear of the permanence of death?

I don’t think he’s afraid anymore. He’s been there. He’s seen it. He knows that there’s nothing. I think he would welcome it with open arms, so he can finally rest.

Even though Beric survives, he loses Thoros, his good friend, traveling companion, and the person who was able to bring Beric to life time and time again. What does it mean to Beric, losing Thoros in this way and at this time?

Thoros was Beric’s last hold on his past. Now, Beric is completely alone in this new world that he’s been kind of living outside of. He’s been living in the woods with the Brotherhood, hunting down perpetrators of injustice, no matter what banner they carry. He’s been trying to carry out Ned Stark’s orders to seek out the Mountain and punish any injustices committed against the poor and the weak in society. And after losing Thoros, Beric now knows that the next death will be his last. That will be it. I also really think they became like brothers. They’re an unlikely pairing, if you think about it. Thoros was such a drinker and a womanizer, and Beric is such a moral and respectful and humble kind of guy. I loved the team. I loved working with Paul. He was such a joy to work with. It was a very sad day when we filmed that.

How difficult was this episode to shoot? It must have been cold, especially in Iceland.

Weirdly, it was coldest when we were filming the scenes on the frozen lake, which was a thing called Wolf Mountain up in Belfast, in Cave Hill. We shot that in January or February, over that space of time. It was freezing cold, because there was rain. In Iceland, you don’t get much rain, because it’s so cold. You just get lovely, fluffy snow. We were really well wrapped up in seal skin, so we didn’t feel the cold. If anything, we were too warm. (Laughs.) We were very, very top heavy.

What was it like, wielding Beric’s burning sword over the course of this scene? I can’t imagine it’s a moment you’re going to forget anytime soon.

No, I have dreams about it. I really do. It’s weird! They’re comforting dreams. Having a weapon like that means you’re pretty much in control of events. Nobody’s going to argue with a flaming sword. I loved it. After years, every time we light that sword up, it’s always like, “Whoa!” Everybody on set just looks over. We’ve all seen it, but everyone’s always like, “There it is! The flaming sword!” It’s just great. It’s a great weapon to have on the show. 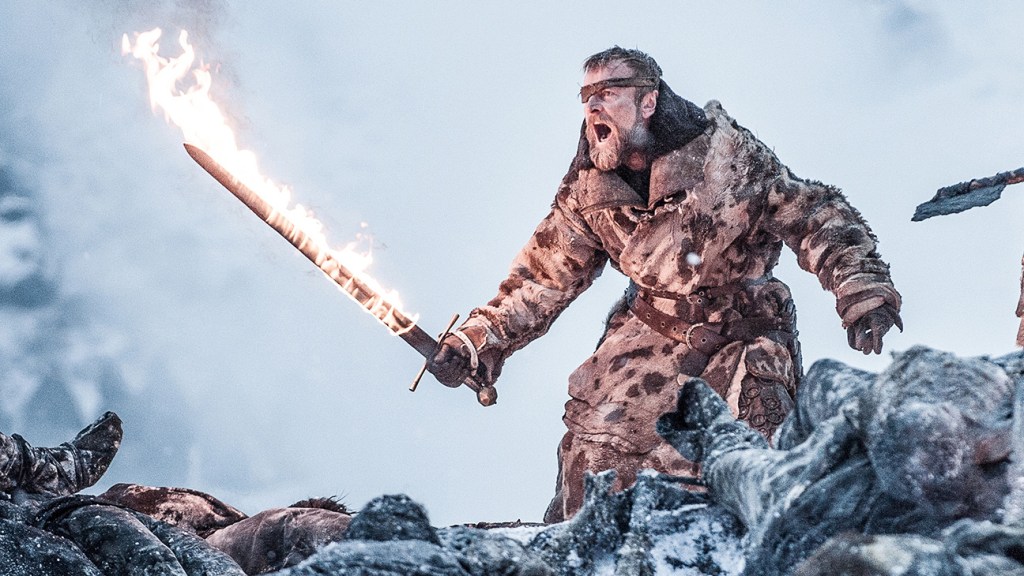 One of the reasons why people love Beric Dondarrion so much is his amazing voice. What’s the secret behind Beric’s voice?

Twenty Marlboro Lights a day. (Laughs.) I don’t know! It’s just my voice! I make it sound a bit English and lower it down an octave. That’s just Beric. The first director I ever worked with on Thrones, he had a big hand in casting me. He said he cast me because there was a bit of an Alec Guinness about me, but a very dangerous Alec Guinness. We kind of just ran with that. He’s very mannered, but underneath, this is a guy you don’t want to push too hard. He’s pretty skilled with his sword. But the voice just happened, I suppose.

What does Beric think of Daenerys‘ dragons? As a disciple of the Lord of Light, he must be impressed.

Yes. There must be some part of him that recognizes these dragons and the significance of their fire, and he connects them with his own god. It only makes sense, then, that a fire-breathing dragon shows up. The breath of fire could almost be considered the fire of the Red God. It’s absolutely right that a dragon should turn up and save their lives at the very end in that battle.

Then it must be a very big deal to Beric when he watches one of these creatures die.

Yes, I think everyone is moved, because this is the most magnificent beast. And they just saved our bacon. It’s very sad.

'Game of Thrones' Trailer: What to Expect From the Season 7 Finale

Beric remains up north with Tormund (Kristofer Hivju). Do you have any sense of what’s awaiting Beric Dondarrion?

Especially the man who has cheated death six times. Seven times would be pushing it.

Right. He’s run out of lives. Now that Thoros is gone, there’s nobody there to bring him back.

What does a happy ending look like for this character? Is it death?

Yes, ironically! As soon as Beric finally gets to embrace death, he can be at peace. Although you see this very composed figure who has a lot of gravitas, I think beneath in his mind there’s a storm of emotions — half-remembered things. He’s almost like a man with Alzheimer’s. He’s losing his mind. He’s also losing the nerve endings in his body. He’s going to find it difficult if he stays alive to even use his sword, because he’s degraded so much through these resurrections. He’s a man in a kind of hell. I think he’ll welcome a good death. It would have to be a good, honorable and brave death, though, that would benefit his fellow man.

What does that death look like in your perfect world, if you were given the keys to the kingdom and given the chance to write Beric’s ending?

He dies from indigestion, sitting on the Iron Throne. (Laughs.) Right after the credits roll, you see this guy who hiccups, screams and keels over, Monty Python style. That’s the end of Game of Thrones.

'Game of Thrones': 7 Key Moments From "Beyond the Wall"