“Don’t fight in the north or the south. Fight every battle, everywhere, in your mind. Everyone is your enemy. Everyone is your friend. Every possible series of events is happening all at once. Live that way, and nothing will surprise you. Everything that happens will be something that you’ve seen before.”

Lord Petyr Baelish (Aidan Gillen), the manipulator more commonly known as Littlefinger, offered this strategic advice to Sansa Stark (Sophie Turner) only four episodes ago. Even in the moment, there was a mournful quality to what he was saying. It’s hard to find sympathy for the devil who lit the spark that killed Ned Stark (Sean Bean) and plunged Westeros into war, but the way he described his outlook on life… really, imagine living that kind of lonely existence. Always at war in infinite realities, all alone, adrift in an endless sea of nightmare scenarios.

Even if that’s how he lived his life, Littlefinger died under circumstances he could not have possibly foreseen. No, not the fact that he died at the hands of Arya Stark (Maisie Williams), or even the fact that his beloved Sansa betrayed him. For Littlefinger, the man who saw all possible events at once, there was simply no preparing for an enemy who could actually see all possible events at once: Bran Stark (Isaac Hempstead Wright), the Three-Eyed Raven.

Littlefinger’s demise is a fitting one on a few levels. First of all, it was a long time coming. In conjuring up the earliest memories of the character, one of the first scenes that inevitably comes to mind is the scene in which he held a dagger against Ned’s throat in season one, snarling out eight instantly iconic words: “I did warn you not to trust me.” Unfortunately for Littlefinger, there were three other iconic words he should have kept in mind: “The North remembers.”

Despite all that they have been through in the series, and despite all that’s certainly still on the way (including White Walkers in Westeros), the Starks will have justice for the crimes committed against their house. They won’t vanquish every single one of their enemies, but before the series ends, many of those adversaries will fall as hard as the Wall. (Too soon?) Short of Joffrey (Jack Gleeson), Walder Frey (David Bradley) and potentially Cersei Lannister (Lena Headey) some day, Littlefinger’s fall was always going to be the hardest of everyone who wronged House Stark. 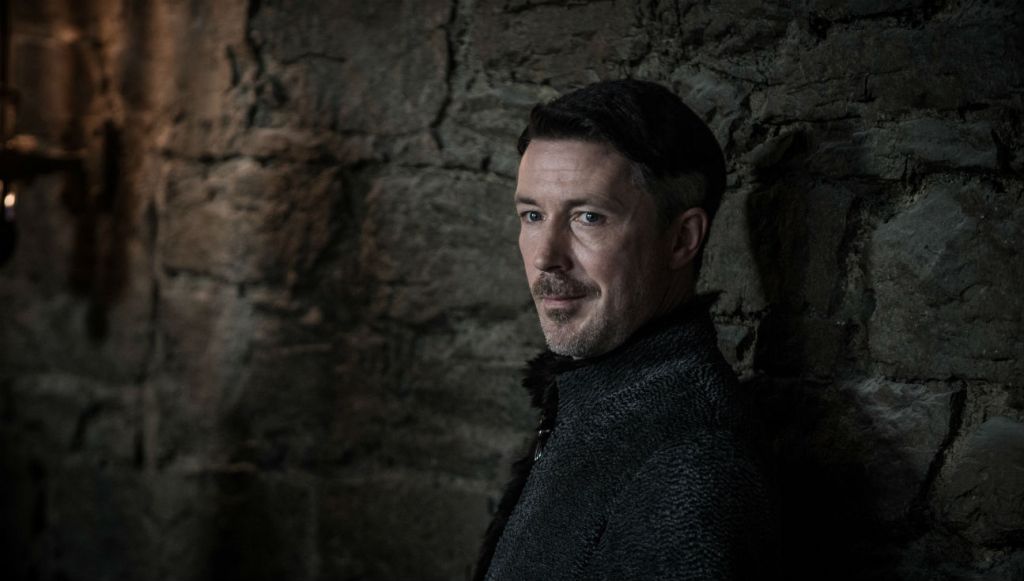 The manner in which Littlefinger died is fitting as well — and no, not because it was at the edge of the same dagger that nearly took Bran Stark’s life, although there’s certainly some poetry in the Valyrian instrument of death. More than the weapon itself, Littlefinger’s demise was the same as the one thing in life he cherished more than anything else: Catelyn Stark (Michelle Fairley), or more accurately, Cat’s flesh and blood.

Littlefinger’s chaotic climb toward power was always rooted in his childhood obsession with Catelyn, a woman he nearly died for when they were little more than children. If she hadn’t died at the Red Wedding, Catelyn would have been appalled at the way Littlefinger “protected” the surviving Starks, especially Sansa. He put Ned Stark on the path toward the king’s “justice,” he personally murdered Lysa Arryn (Kate Dickie), he married Sansa off to a psychotic rapist… the list goes on. In the books, Catelyn overcomes death and is resurrected as the vengeful Lady Stoneheart. That version of the story may end with Catelyn being the one to kill Littlefinger herself. For the show’s version of events, it’s more than appropriate that her offspring were afforded the opportunity to get the job done.

Finally, Littlefinger’s death signals a huge shift in the show’s status quo. The White Walkers have finally arrived in Westeros. There’s little time for the politicking that made Game of Thrones such a standout series in the first place. Sure, Cersei won’t give up her hold over the Iron Throne without a fight, but the main thrust of the series as it enters the homestretch will be mankind’s war against the Army of the Dead. There wasn’t much room for Littlefinger in that storyline. As his death makes clear, this was a man who was prepared for all possibilities, except for possibilities involving the supernatural. (Another point in the column of Littlefinger getting killed by Lady Stoneheart in the books, by the way.) As much fun as it would have been to watch Littlefinger pull a Harry Ellis from Die Hard with the Night King, and get an ice lance through the face for all of his troubles, his death in the season seven finale serves as a symbolic gesture of the tides changing in the Game of Thrones narrative. In order for this show to grow into its endgame, Littlefinger had to die.

But it might not be the end for the character, or at least a version of the character. Don’t forget that the woman who executed Littlefinger also comes equipped with the ability to take on the likeness of the people she kills. What’s more, this same killer still has at least one more name to cross off her list: Queen Cersei, who just so happens to be in King’s Landing… and who do we know that just dropped dead at the feet of a Faceless Man? It’s incredibly likely that we haven’t seen the last of Aidan Gillen on Game of Thrones, but if we do see him again, it won’t be as Littlefinger. It will be as No One.

For now, at least, Littlefinger’s death marks the departure of one of the most important players in a good, long while. At least he went out in style. If there are any regrets or missed opportunities, it’s this: he wasn’t afforded one final scene with Varys (Conleth Hill). Good thing the earlier seasons of the show are nothing more than a few clicks of the remote away.