Step aside, The Walking Dead. You’re not the only genre show with an eighth season steeped in all-out war.

In its stunning season seven finale, Game of Thrones delivered a litany of monumental moments, including but not limited to (and seriously, final spoiler warning, turn back before it’s too late): the death of Littlefinger (Aidan Gillen), the consummation of Jon Snow (Kit Harington) and Daenerys Targaryen’s (Emilia Clarke) relationship, the confirmation of Jon’s status as a legitimate Targaryen and so much more. Oh, and it finally gave viewers the moment they’ve awaited ever since the very first scene of the series: White Walkers invading Westeros. No big deal.

The gripping final moments of the episode, called “The Dragon and the Wolf,” featured Tormund Giantsbane (Kristofer Hivju) and Beric Dondarrion (Richard Dormer) helpless as they witnessed the Night King and his minions finally rolling up to the Wall, fully ready for business. With an undead version of Viserion at his command, the Night King flew up to the magical blockade separating the Seven Kingdoms from the frozen wasteland beyond and obliterated the thing.

Week in 'Game of Thrones': Everything to Know Before the Season 7 Finale

There’s no greater symbolic gesture of the end of Westerosi civilization as we know it than the fall of the Wall, a development that was baked into the premise of the Wall’s existence from the very beginning. A fantasy author doesn’t just place an enormous enchanted barrier between the living and the dead without plans to knock the thing down eventually. Now, there’s no more eventually about it.

What does the Wall’s fall mean for the series moving forward? Nothing short of all-out war as soon as Thrones returns. The final season of the record-breaking HBO series boasts only six episodes, and given the events of the season seven finale, it’s easy to see why. With White Walkers fully marching on Westeros soil, there’s simply no way for Thrones to expand its story beyond a shortened but propulsive arc. For instance, Winterfell is within spitting distance of the Wall, at least if we’re judging by how quickly one can fly to the North from Dragonstone, as established in the season’s penultimate hour. Expect the home of House Stark to come under attack from the Army of the Dead as soon as the very next episode of Game of Thrones — tragic timing, considering Winterfell only reverted to its rightful owners very recently.

Speaking of the rightful owners of Winterfell, the surviving children of Ned (Sean Bean) and Catelyn Stark (Michelle Fairley) finally avenged their parents, leading to the biggest human casualty of the finale: Littlefinger, the scheming manipulator who died as a long-winded result of his unhealthy obsession with his beloved “Cat.” After spending weeks at each other’s throats, the Stark sisters Sansa (Sophie Turner) and Arya (Maisie Williams) pulled off their proverbial masks, revealing their aim to take down Littlefinger once and for all. With an assist from Bran (Isaac Hempstead Wright) and his ability to see into the past, the Stark siblings ascertained all of the evidence they needed to convict Lord Baelish in his crimes against House Stark. For a man who once boasted that he could see every single possibility playing out at all times, it turns out Littlefinger was no match for a young man with actual omnipotence on his side.

Love him or hate him, Littlefinger was a character who added enormous amounts of intrigue to the show’s more politically inclined storylines. His loss isn’t quite as grand a symbolic gesture as the fall of the Wall, but it’s nevertheless one that reinforces the show’s current mission statement: Game of Thrones has little time left for scheming and manipulation, not when there’s an undead army breathing down humanity’s neck. (In fairness, the White Walkers have not quite yet reached the Neck. In further fairness, that was an awfully nerdy Westeros geography joke. I make no apologies.) Given the clear and present danger of the show, Littlefinger’s role was already slipping away; with the Night King now officially in Westeros proper, and with Littlefinger in such close physical proximity to the coming White Walker assault, there was only so much wheeling-and-dealing Lord Baelish could pull off before his inevitable meeting with the Stranger. Considering the alternative, it’s much more fitting for his story to end at the hands of the Starks, the family he ruined through his own political ambitions and long-simmering personal grudges.

Of course, death is not always the end on Game of Thrones, as both Beric and Jon Snow would happily tell you. No, the Lord of Light doesn’t likely have plans for Littlefinger. The only person who might have cause to bring Littlefinger back to life: No One. Don’t forget that Arya is capable of taking on the likeness of the dead, thanks to her training as a Faceless Man. And don’t forget that she still nurses a serious grudge against the Lannisters. Before she returned to Winterfell, Arya was heading south to assassinate Queen Cersei (Lena Headey). Is it possible that Arya will resume that mission, this time wearing the face of Littlefinger as a means of getting closer to Cersei, just as she’s becoming increasingly desperate for allies? Put that theory on the back burner for now, and don’t forget to take it off the stovetop come time for the final season.

The season finale featured another major development for the inhabitants of Winterfell: the revelation of Jon Snow’s true heritage. Of course, anyone who reads about Game of Thrones and takes part in the theory culture already knew what the show delivered as a “big reveal”: Jon is the son of Lyanna Stark and Rhaegar Targaryen, and he is the legitimate heir to the Iron Throne, due to his parents’ legitimate marriage. (For what it’s worth, seeing Lyanna and Rhaegar together in the flesh was among the most satisfying experiences in Game of Thrones history, at least for the book-reading crowd.) Bran and Sam (John Bradley) arrived at the mutual discovery of Jon’s origins together, and of course the potential ramifications are huge for the Seven Kingdoms’ political landscape — assuming there are even Seven Kingdoms still standing at the end of the impending White Walker war, let alone one kingdom. 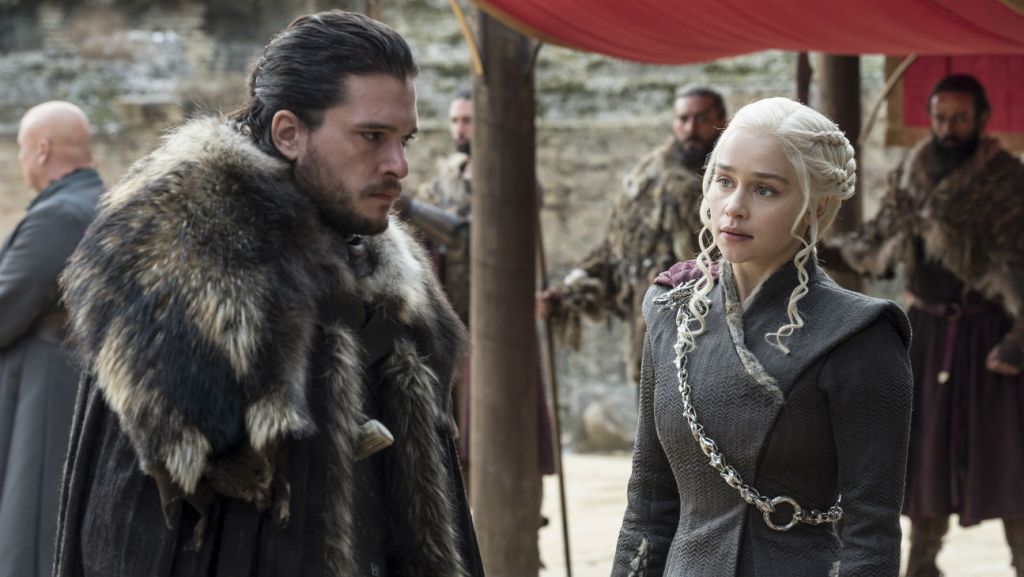 Among the many reasons why the reveal is a big deal: Jon and Daenerys (Emilia Clarke) have made their relationship “Facebook official,” consummating their love for one another. It would be nothing other than a moving, heartwarming moment of hard-earned happiness, if not for the teensy-tiny detail that Daenerys is actually Jon’s aunt. Positioned next to the incestuous relationship between Cersei and Jaime (Nikolaj Coster-Waldau), and considering the history of incest within House Targaryen, it’s not a complete and total deal-breaker, but your mileage may and will vary. The bigger deal, at least as far as it pertains to the politics of the realm, is that Jon just bent the knee to Daenerys, even though his claim over the throne is the stronger of the two. Will Jon unbend the knee if and when he finds out about his parents? It could be the major source of friction between the King in the North and the Dragon Queen in the final season — or at least one major source of friction.

Speaking of royalty and incest, which will go down as my personal favorite transitional phrase of the year, Jaime and Cersei aren’t exactly seeing eye to eye these days. During the epic meeting in the Dragon Pit, both of the Lannister siblings are convinced beyond a shadow of a doubt about the great threat lurking north of the Wall — or actually just lurking in the North, now that the threat is through the Wall. But only Jaime actually plans on committing to the cause of fighting against the White Walkers. Cersei plans to double-cross Daenerys, especially in light of Jon’s disclosure that he’s bent the knee to the Targaryen queen, but Jaime is well past the point of those concerns, given that the White Walkers are on the march.

For a moment, it looked like their disagreement would lead toward Jaime’s demise at Cersei’s hands — or the Mountain’s hands, more accurately. Instead, the two have parted ways, with Jaime dutifully riding off into battle against the Walkers. The stage is very much set for a final, fatal disagreement between Jaime and Cersei in the final season, one that could fulfill the prophecy of Cersei’s death at the hands of the “valonqar,” or “younger sibling” in High Valyrian. That’s assuming the White Walkers don’t get their hands on both siblings first.

Turning toward the younger sibling, the scene between Cersei and Tyrion (Peter Dinklage) has to go down as one of the single greatest exchanges of the season. After a long string of episodes in which he lacked a meaningful arc, Dinklage was finally allowed a real moment to shine. In the scene, after the two share a glass of wine or two, Tyrion deduces that Cersei is pregnant. Given his love for her deceased children (two of them at least), one imagines the arrival of a new nephew or niece to be a pretty big deal for Tyrion. More and more, what was once an unfathomable prospect is starting to look possible: Cersei might make it out of this series alive, if Tyrion can convince the Dragon Queen to show mercy toward an expectant mother. An evil expectant mother, but an expectant mother all the same.

Like Jaime, Tyrion nearly lost his life at the hands of the Mountain — and while we’re on the subject, can we take a moment to acknowledge the moment between the Mountain and the Hound (Rory McCann), in which the much-hyped Cleganebowl was hyped to new levels of hypeness? Consider the younger Clegane brother’s words to his zombified sibling: “Remember me? Yeah, you do. You’re even fucking uglier than I am now. What did they do to you? Doesn’t matter. It’s not how it ends for you brother. You know who’s coming for you. You’ve always known.” And lo, it is known: the final season will feature a battle to the death between the brothers Clegane.

One last development in the episode: Theon Greyjoy (Alfie Allen) rediscovering his inner badass and kicking the snot out of an obnoxious Iron Islander. Looks like there’s room in the final season for little Theon to track down Uncle Euron (Pilou Asbaek) and rescue Yara (Gemma Whelan) after all. It’s a nice and surprising turn for fans invested in Theon’s storyline, which, admittedly, is not everyone. The most important part of Theon getting his groove back, of course, is the advice he receives from Jon Snow: “You’re a Greyjoy, and you’re a Stark.” Moving forward, whenever Jon learns the truth about where he comes from, here’s hoping he’ll remember he’s both Targaryen and Stark — the dragon and the wolf, as it were.