The fall of the Wall is the greatest signal yet that the end of Game of Thrones is in sight. The magical barrier was the only thing standing between the living and the dead, the last bastion between Thrones as we know it and the official end of the line. Blame the Night King all you want — just don’t blame Jeremy Podeswa, the man who directed the season seven finale.

“I wasn’t personally responsible for destroying the Wall,” the veteran Thrones director laughs when asked about his culpability in bringing the marvelous structure to ruin. “It wasn’t me on the dragon!”

But it was Podeswa who oversaw the epic episode, which included other momentous events beyond the Wall’s collapse: Jon Snow (Kit Harington) and Daenerys (Emilia Clarke) becoming physically intimate for the first time, the reveal of Jon’s status as the heir of the Iron Throne, and the death of Littlefinger (Aidan Gillen), just to name a few. Here’s what Podeswa said about the creation of all of those scenes and more.

'Game of Thrones': What That Destructive Ending Means for the Final Season

What was your reaction when you learned that the Wall would fall in the finale?

It was very exciting. When you’re reading the script, you’re thinking to yourself, “Oh my God. They’re really going there.” So that was my first response. Then it was like, “Wow. This is an enormous, spectacular sequence. How are we actually going to pull it off?” There’s a big question of mine about how much is real, how much is not real, how much is visual effects. Once I was over the fabulousness of what the scene could potentially be, we got down to the hard questions of how are we actually going to pull it off? You’re so well-supported on a show like this with such great people that I knew I wouldn’t be doing it alone and we would figure out this problem together, with me and the visual effects department and with my cinematographer and with [showrunners David Benioff and Dan Weiss]. It becomes a bit of a group effort, what the final realization of these things should be. It was very exciting, going into it.

Where did you land on the practical versus visual effects question?

Actually, it’s a combination. Even within the visual effects, there are a lot of real, practical elements that aren’t so easy to separate if you’re not inside the process. Certainly everything that’s on top of the Wall is live. Everything with Tormund and Beric and the wildlings on top of the Wall was all practical, shot on set in Belfast. Many elements of people falling off the Wall — stuntmen, things like that — all of that is shot as elements that get put into visual effects sequences later. All of the more panoramic spectacular shots are visual effects, but they’re designed by me working with the visual effects department from storyboards that I created with storyboard artists. And there are many interactive elements also that people might not be aware of, like the dragon flame and the impact of that and what it does in terms of the effect it has on the Wall. A lot of those are real practical elements that we shoot, and lighting effects we create to mimic those effects when we’re not working on the sets. There are so many different components within many of those shots, and sometimes there’s just an element that’s real, and sometimes the whole thing is real, and sometimes nothing is real. From a concept stage, everything is worked out by me with the visual effects department in terms of how it’s going to be achieved. 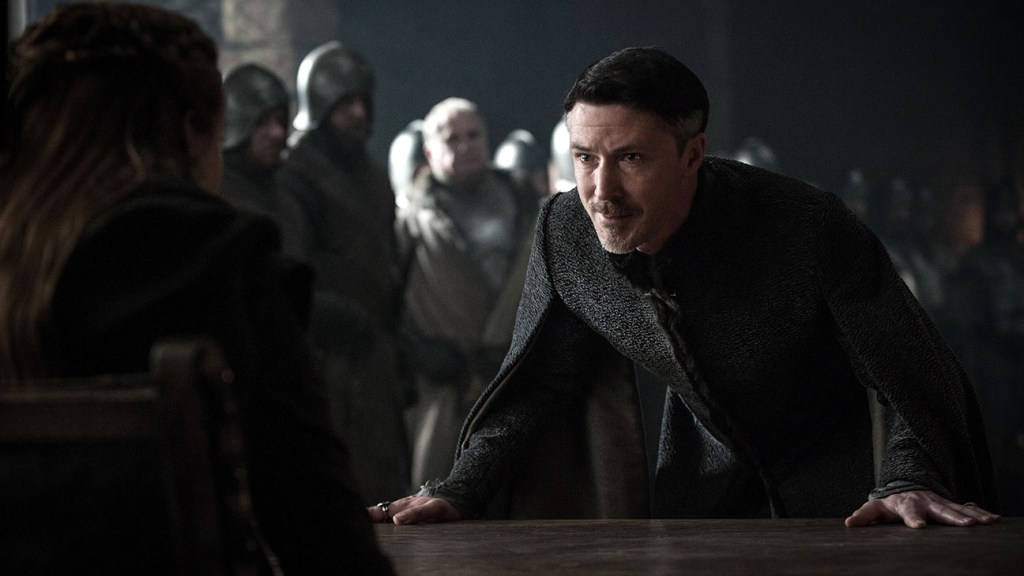 What was the mood on set like during the scene where Arya kills Littlefinger? It must have been intense.

It was incredibly intense. When any character gets killed, there’s always a sadness about that, because they’re part of the family in a way. But there’s also an interesting thing about how you go out. For Aidan and for everybody, it was such a dramatic and beautifully written scene, that if you have to go out? It’s the best possible way to go out. There’s a real appreciation for that kind of artistry, and the beauty of that sequence as well. It was moving and difficult to see somebody get to the end of their role on the show, but it was an amazing scene to go out on. The mood when we were shooting it was incredible, actually. Aidan’s performance was so, so passionate, and so surprising in a way. You know, he’s an amazing actor, but there’s a color we haven’t really seen from him on this show, because throughout the series, he’s a character who manipulates things, who controls things, who’s on top of everything. He seems to hold all the cards most of the time. This is the first time where we’ve seen him completely thrown and completely unbalanced and really having to beg for his life in the end. He’s so vulnerable, and I thought what he brought to the scene was so amazing. We were really just riveted, all of us, just watching it. It was incredibly moving. Many people had tears in their eyes watching it. It was really spectacular. And he had to sustain this for a full day of shooting. We didn’t really shoot the end until a certain point, and he was very ready at that point. It was very, very powerful. And then the take we used of him, the very last moment when he was begging for his life, it was actually breathtaking, just to watch him do that, even after everything we had been filming up until that point. It was very, very powerful and very moving.

'Game of Thrones': A Tribute to the Season 7 Finale's Biggest Death

Was there a sense of filming something iconic and legendary in the wedding between Rhaegar and Lyanna? And how many people on set confused Rhaegar actor Wilf Scolding for Harry Lloyd, who played Viserys in season one? Because they look almost identical on the show.

I know, it was a little bit of a double take for everybody. (Laughs.) But they’re meant to look similar! For us, it’s always interesting when you do these backstory scenes, where you illuminate something new. I knew this was a very big pivot point in terms of the story and what we know about Jon’s backstory. It was very important for us that this scene has a certain tone. It was really antithetical to what was perceived with what had really happened with Rhaegar and Lyanna. Because the understanding was that it was a violent union, and there was a lot of drama that everybody imagined and understood about what happened with them. But when we see the real reality, we see that actually there was a kind of magical relationship between the two, and they had a proper marriage that was based on love. For me, it was important to present that scene in a kind of idyllic way, which was really unexpected. It’s not the perceived history. The more idyllic we could make it without it being overly sentimental, the better. I think that was a very interesting thing to play with.

The revelation about Jon’s true origin comes juxtaposed with Jon and Daenerys‘ first love scene. There’s some cognitive dissonance in play as a result, since this is arguably a heroic moment and a romantic moment … but Freud would have a field day, as well. What was the tonal balance you were trying to strike?

You’re getting an epic revelation in this sequence. It’s an epic revelation about the past, and an epic revelation that’s suggestive of the future and what’s going to happen. For us, it was very important that there be a question about what could possibly happen after this moment. We know now the full history that led to this moment, but now what’s going to happen? In the script, it described the fact that they were love-making, but it didn’t go into great detail in terms of what was going on between them as characters in that moment. We built in a moment between Kit and Emilia where they stopped for a moment and looked into each other’s eyes. The intention from my point of view, and their point of view too, is that they’re driven by passion into this. They don’t even fully understand what it’s all about and what the consequences of it are. They really can’t stop themselves. It’s almost destiny that’s bringing them together. There’s a moment where they’re like, “Are we actually going to continue doing this? Are we actually doing this?” And they can’t stop themselves. For me, that was really important, and that gets played out with Tyrion, too, because now he knows that this has happened and there are big questions for him and for everybody what the larger consequences of this are going to be.