As exciting as it was to see him meet Daenerys Targaryen (Emilia Clarke) for the very first time, it was equally riveting to watch Jon Snow (Kit Harington) finally lay eyes on a dragon.

For one thing, the Game of Thrones hero has been tucked away so far in the frozen North that he wouldn’t even be able to fathom the thought of such a fiery creature. But Jon seeing the three winged children of Daenerys Stormborn takes on extra resonance now, given what viewers witnessed at the end of season six — or, more specifically, what Bran Stark (Isaac Hempstead Wright) witnessed.

Let’s refresh, for those who are too fixated on season seven to remember last year’s climactic moment. In the season six finale, Bran once again trips back into the past, revisiting the day his aunt Lyanna Stark died at the Tower of Joy. Once inside the tower, Bran watches on as Lyanna dies, mere minutes after giving birth to an infant son — a baby who will grow up to be known some day as the King in the North. It’s not explicitly said on the show, but fan theories and HBO promotion materials alike agree that Jon Snow isn’t just the son of Lyanna Stark, but also Rhaegar Targaryen, the man who would have one day inherited the Iron Throne if Robert Baratheon (Mark Addy) hadn’t struck him down with a war hammer to the chest.

The season six scene only confirmed what was already the worst-kept secret in Game of Thrones, as fans had been speculating for years about Jon’s true parentage. And as it stands, the show hasn’t gone through with confirming the Rhaegar side of the infamous R+L=J equation, three episodes after its veritable revelation. But thanks to the events of “The Queen’s Justice,” that particular Snow-ball is moving ever forward, steadily gaining strength and speed.

Let’s revisit some of the ways this episode advanced the Jon Snow hype:

• As they walk through Dragonstone together, Tyrion (Peter Dinklage) reminds Jon that things don’t go well for Stark men when they travel south. “True,” Jon replies, before adding, “I’m not a Stark.” Indeed he’s not, at least not in name, and at least not the Stark he thinks he is.

• When Jon enters the audience chamber, Missandei (Nathalie Emmanuel) announces Daenerys with all of the titles she’s earned over the course of the series. Davos (Liam Cunningham) doesn’t even have ten words to describe Jon in response. It’s a stark (ha) contrast between the two leaders, though the absence of countless titles and names speaks to Jon Snow’s everyman quality — a deeply embedded trait that won’t go away even if and when he finds out he’s much more specific than an everyman.

• “Your father burned my grandfather and my uncle alive. He would have burned the Seven Kingdoms,” Jon tells Daenerys, articulating why he doesn’t trust her just yet. There’s a righteousness in the way Jon describes this harrowing history of violence, as there’s a righteousness in just about everything Jon says and does. But will he reconsider his family history when he realizes the great irony of that violent act — that his maternal grandfather, Rickard Stark, was murdered by his paternal grandfather, the Mad King? Lord Snow is going to need some therapy bills when this is all said and done.

• At one point in the meeting of the minds, Dany tries to convince Jon to bend the knee due to the shared history between their great houses. “I am the last Targaryen,” she tells Jon, who just so happens to be the other last Targaryen, even if neither of them know it yet. It’s going to be an uncomfortable family reunion once Dany and Jon learn they are secretly aunt and nephew.

• Toward the end of the first conversation, Davos finally finds his words, and speaks toward Jon Snow’s many accomplishments across the series. He suggests that destiny has been driving Jon forward, just as it’s driven Dany, and even starts to talk about how the former Lord Commander of the Night’s Watch briefly died for his people. Jon shuts the topic down as quickly as he can, but it sticks in Dany’s mind, as she brings it up later in conversation with Tyrion. Even if it sometimes feels like the show has forgotten about Jon’s temporary death, this episode spent a meaningful amount of time chewing on the idea of the King in the North’s mortality. More evidence to support our big Jon Snow theory of the season? We’ll find out soon enough. 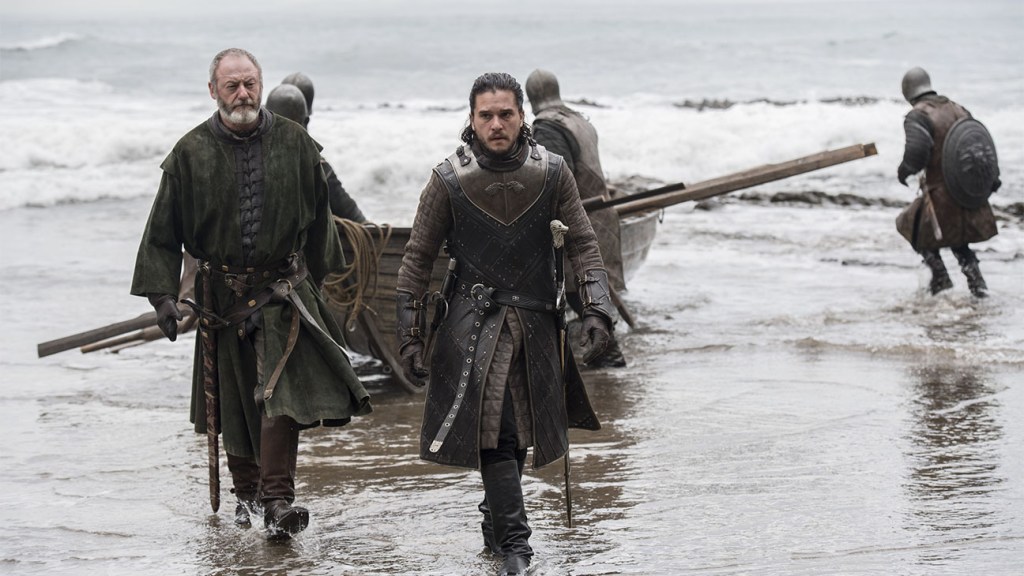 • Jon spends significant time brooding on the cliffs of Dragonstone, staring out into the ocean with that faraway gaze Kit Harington has perfected. It’s a powerful image, seeing a man who looks so much like his adoptive father, Ned (Sean Bean), staring out over the land the other side of his family first settled centuries ago. Jon is in such a hurry to return home to the North, and yet he has no idea he’s already home.

• In the same scene, Jon tells Tyrion that he feels like he’s doing nothing more than repeating his father’s mistakes. Ned Stark’s failings speak for themselves, of course, but if you view Jon’s words as an unwitting reference to his biological father — to Rhaegar — then the words carry some haunting new weight: Rhaegar died fighting in a war he effectively started when he ran away with Lyanna, their love so forbidden that it ended the Targaryen regime, if only until Dany’s hopeful return to power. Will Jon follow in Rhaegar’s footsteps, at least as far as not living to see the end of the war he’s started? Will he bring the threat of the White Walkers onto mankind’s radar, but not survive long enough to see it through to the finish? It’s a brutal prospect to consider, but one that’s very much on the table.

'Game of Thrones': Ranking the Highlights From That Epic First Meeting

• For his part, Tyrion offers Jon with some words of comfort: “Children are not their fathers.” It’s not quite a flashing neon sign that says “HEY, JON, JUST SO YOU KNOW, NED STARK IS NOT YOUR REAL FATHER,” but it’s close enough.

• “Maybe you are a Northern fool,” Tyrion later adds, when Jon remains too stubborn to start thinking reasonably. Northern blood flows through Jon’s veins, of course, just as much as the fire from House Targaryen, if not more. Certainly, the way Jon was nurtured in Winterfell outweighs the nature of his secret beginnings. In other words, if and when Jon learns about his past, Tyrion’s words will still apply. Jon might be the prince who was promised, the second “Last Targaryen,” but at the end of the day, he’s also still a Northern fool.

• Finally, we end in the North. After four seasons on the road, Bran has finally returned home to Winterfell, just in time for an awkward reunion with Sansa (Sophie Turner). “I wish Jon was here,” she tells him. The troublingly stoic Bran replies: “Yes. I need to speak with him.” Expect Game of Thrones to keep Jon and Bran separated just long enough to keep the Targaryen secret under lock and key until a later date. In the mean time, the hype for such a revelation only grows louder and louder with each passing episode, like a dragon roaring above Dragonstone.

'Game of Thrones': Daenerys Needs Jon Snow's Help in 'The Spoils of War'