Jon Snow was gone. Then he wasn’t. Mirroring his character’s arc, Kit Harington was gone from the Game of Thrones press circuit — and now he’s not.

“It’s nice to be back,” the actor tells The Hollywood Reporter, “and not feel like I’m a walking spoiler.”

Indeed, there was absolutely nothing Harington could say about Jon’s season six storyline at the time, nor anything anyone else could say in that regard. The character’s very existence in the sixth year of the HBO fantasy epic was the spoiler to avoid, which was a difficult prospect given the size and scope of Jon’s role in everything.

'Game of Thrones' Season 7: Which Characters Are Likely to Die?

For those who haven’t revisited season six since it aired: Jon was returned from the dead courtesy of Melisandre (Carice van Houten), the Red Priestess who performed a resurrection ceremony, seemingly failed, then was as surprised as anyone when the 998th Lord Commander of the Night’s Watch sprang back to life. From there, Jon shrugged off his Lord Commander robes and embarked on a new mission: rallying the North to prepare for war against the White Walkers.

First, Jon was forced to take out the garbage person running amok in his ancestral home of Winterfell: Lord Ramsay (Iwan Rheon), the so-called Bastard of Bolton. Jon’s battle against Ramsay was not without casualties (RIP Rickon), but the campaign was successful, thanks to the help of his sister Sansa (Sophie Turner), Tormund Giantsbane (Kristofer Hivju) and his wildling warriors, and an eleventh hour assist from the Knights of the Vale. Now, Ramsay’s gone, and Jon’s the man in charge of Winterfell — the latest man to wear the mantle of “King in the North,” a proverbial crown that’s not likely to fit comfortably on his head.

“He seems to be the one person who’s gotten to leadership without actually asking for it,” says Harington. “He started the series as an illegitimate black sheep in the family who’s just going up to this, back and beyond, to achieve nothing. And now he’s the King in the North. He never aimed for that. He never expected it. He never asked for it. I think he’s proud of it, but I think he’s going to have about 10 seconds to be proud of it before he’s right back in the proverbial poop.”

For what it’s worth, one man has confidence that Jon can side-step the muck: Liam Cunningham, who plays Davos Seaworth, the former Stannis Baratheon lieutenant who now serves as one of Jon’s single most trusted advisors.

“He’s a good man,” says Cunningham. “We all have confidence in Jon that he’ll do the right thing and wouldn’t succumb to power — but power is a difficult and dangerous drug, so we shall see there.”

Cunningham points to the common theme on Game of Thrones: “The nature of power and what it can do to good men. That’s why Davos defended Stannis for so long. There was a good man in there who got consumed by the drug that is power. We’re talking about holding up a mirror to society here.” And there are more than a few people lurking in Winterfell who want to see that mirror break, like Littlefinger (Aidan Gillen), the political animal who wants nothing more than to drive a wedge between Jon and Sansa — nothing, save for his own ascension to the Iron Throne, of course.

“It’s one of the reasons he’s been nurturing this relationship with Sansa Stark,” Gillen says about how Littlefinger plans to move about Winterfell. “Clever as he is, he knows that she’s the most appropriate person to align himself with right now. He also wants to use that relationship to observe Sansa and observe what’s happening around [Winterfell] — for instance, Jon. [He wants] to undermine her relationship with Jon. It’s the best position he can be in for now. Let’s see where that goes.” 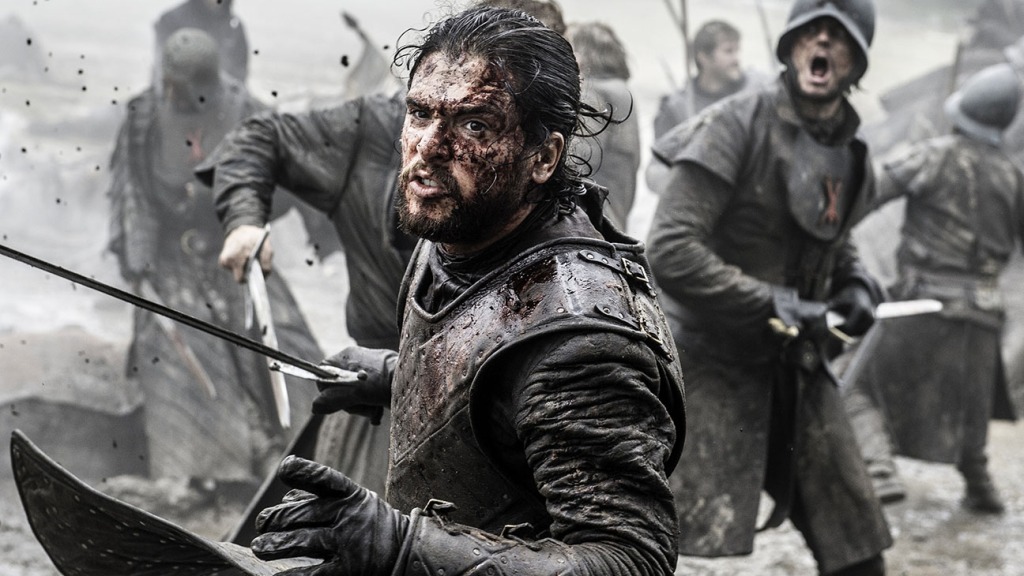 We’ll also have to see where things go in terms of Jon and his secret origin. It was revealed at the end of season six that Jon’s not the son of Eddard Stark (Sean Bean) as he always believed. Instead, his mother is Ned’s late sister Lyanna Stark, and it’s heavily suggested that his father is Rhaegar Targaryen — a twist that would make Daenerys (Emilia Clarke) Jon’s aunt. For his part, Harington is quick to caution that the first element of the R+L=J equation remains unconfirmed.

“It’s important to say at the moment that it looks clear that this fan theory is going to come true, but we don’t know that yet,” he says. “We know Lyanna Stark is his mother, but we don’t know who his father is for sure yet. But when I read all of that, I was very excited by it. There’s obviously been this mystery for him for many seasons and many years. I love that he doesn’t know about it. We all know about it, but he’s completely in the dark about it. As far as he knows, he’s still the illegitimate child of Ned Stark and some southern woman somewhere. That’s all he thinks.”

Someone is on his way to meet Jon, and he holds the answers to Lord Snow’s secret beginnings: Bran Stark (Isaac Hempstead Wright), who used his time-spanning gifts as the new Three-Eyed Raven to visit the moment of Jon’s birth at the end of season six. When we last saw him, Bran was on his way back to Westeros after spending several seasons beyond the Wall. If he makes it back to Winterfell, he’ll have the surprising answers to the questions Jon doesn’t even know to ask … but that’s an if, according to Wright, and even if Bran and the other Starks reunite in Winterfell, it might not be the happy reunion fans are hoping to see.

'Game of Thrones' Season 7: What The First Three Episode Titles Reveal About What's Coming Next

“If a Stark reunion ever were to happen, I think it would be bittersweet,” he says. “All of them have been in so many different places and done so many different things. Bran is the Three-Eyed Raven, Arya (Maisie Williams) is an assassin, Sansa has been bandied about by Littlefinger and Ramsay and Joffrey (Jack Gleeson); not the best taste in gentlemen. I don’t know that it would be exactly what everyone wants.”

For his part, Harington doesn’t know if even Jon knows what he wants, other than to stop the White Walkers from invading Westeros. Whatever fate lies in store for the King in the North, it’s hard for Harington to picture a happy outcome.

“I think happiness is a very strange term to associate with Jon,” he says. “He has a very odd sense of what ‘happy’ is. It might not be everybody else’s ‘happy.’ I don’t know what happiness is for Jon. I actually think secretly deep down, he’s a bit of a psychopath, weirdly. He looks for violence. In a strange way, and I said this to [director Miguel Sapochnik] during ‘Battle of the Bastards,’ I think that in a weird way this could be Jon’s natural home, on this battlefield, where he comes to life. For all of his good, he’s a violent man.”

Wherever the violence leads, the man’s journey ends one season from now — if not sooner.

“It’s been my life through my twenties,” Harington says about the show’s imminent end. “It will be very emotional when it finishes for me. It might finish for me this year — who knows? It’s a strange thing to fathom, not coming back and doing Game of Thrones. But it’s also the right time.”