Even though it feels like they were in each other’s lives for years, Daenerys Targaryen (Emilia Clarke) and Jon Snow (Kit Harington) only met one season ago in “The Queen’s Justice,” an episode in which the Dragon Queen and then King in the North first faced off about the future of Westeros. In that cold and comfortless Dragonstone throne room, Daenerys artfully recapped her journey for Jon, packaging more than seven seasons worth of story into one simple monologue:

“I was born at Dragonstone, not that I can remember it. We fled before Robert’s assassins could find us. Robert was your father’s best friend, no? I wonder if your father knew his best friend sent assassins to murder a baby girl in her crib. Not that it matters now, of course. I spent my life in foreign lands. So many men have tried to kill me. I don’t remember all of their names. I have been sold like a brood mare. I have been chained and betrayed, raped and defiled. Do you know what kept me standing through all those years in exile? Faith. Not in any gods. Not in myths and legends. In myself. In Daenerys Targaryen. The world hadn’t seen a dragon in centuries until my children were born. The Dothraki hadn’t crossed the sea — any sea — and they did for me. I was born to rule the Seven Kingdoms, and I will.”

'Game of Thrones' Series Finale: Who Won the Iron Throne?

Nearly ten years of Daenerys’ televised journey culminated last week in director Miguel Sapochnik’s “The Bells,” a harrowing portrayal of the cost of war and the ease with which heroes can become villains under the right (or very wrong) circumstances. Even with King’s Landing at her mercy, even with bells tolling throughout the air, Daenerys Stormborn could not find it within herself to accept victory so easily. Instead, she rampaged the city, covering it with fire and blood, succeeding where her dead father failed so many years ago to virtually burn King’s Landing all the way to the ground. Bursts of dragon fire and wildfire mixed together to form the most destructive act ever seen in Game of Thrones, and indeed, one of the most destructive acts in the history of Westeros — all thanks to Daenerys, the warrior queen who had the utmost faith in her own worthiness to rule.

Tragically, much of the audience shared Dany’s same faith; the fall of King’s Landing was their cruel reward. Would the Game of Thrones series finale restore any faith in the Mother of Dragons? That was the big question coming out of “The Bells” and heading into the last remaining hour of the series, written and directed by creators David Benioff and Dan Weiss. At last, we have an answer — and it certainly won’t satisfy everyone.

Indeed, many of those who believed in Daenerys throughout the series were deeply unsatisfied with the way she waged war over King’s Landing. The opening acts of the series finale involve Tyrion (Peter Dinklage) literally sorting through the rubble of the disaster, discovering the dead bodies of his siblings. He eventually reaches the Red Keep and watches as Daenerys speaks before her gathered forces, ash falling down on the ruins of King’s Landing as she sketches out her vision of the future. 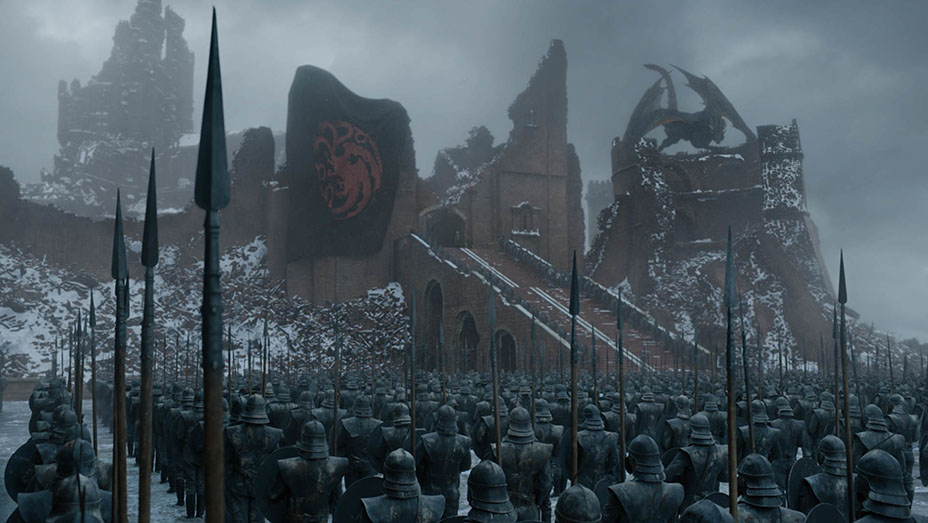 “Blood of my blood. You kept all your promises to me. You killed my enemies in their iron suits. You tore down their stone houses. You gave me the Seven Kingdoms,” she tells them, speaking in High Valyrian. “Unsullied, all of you were torn from your mother’s arms and raised as slaves. Now, you are liberators. You have freed the people of King’s Landing from the grip of a tyrant. But the war is not over. We will not lay down our spears until we have liberated all the people of the world! From Winterfell to Dorne, from Lannisport to Qarth, from the Summer Isles to the Jade sea. Women, men and children have suffered too long beneath the wheel. Will you break the wheel with me?”

It’s the same speech that, in the past, would have caused the audience to stand up and salute the Khaleesi. But given the context of “The Bells,” not to mention the haunting score from Ramin Djawadi, Dany’s words take on darker meaning. The meaning is punctuated when Tyrion approaches and resigns as Hand of the Queen. He’s immediately placed under arrest. Moments later, he and Jon Snow meet in his makeshift prison cell; Tyrion tries to convince Jon that the only thing to do now is take down Daenerys in order to save the rest of the world.

“When she murdered the slavers of Astapor, I’m sure no one but the slavers complained,” says Tyrion. “After all, they were evil men. When she crucified hundreds of Meereenese nobles, who could argue? They were evil men. The Dothraki khals she burned alive? They would have done worse to her. Everywhere she goes, evil men die and we cheer her for it, and she grows more powerful and more sure she is good and right. She believes her destiny is to build a better world for everyone. If you believed that, if you truly believed it, wouldn’t you kill whoever stood between you and paradise?”

Tyrion’s words speak to the clear themes of power at the heart of Game of Thrones, as Benioff and Weiss told the tale — namely, that every person is the hero of their own journey, even when they do something horrible. In that spirit, when we see Dany next, she meaningfully moves toward the Iron Throne in what’s left of the Red Keep, the sacred seat of power she’s coveted all along. It’s portrayed as a joyous moment for the Dragon Queen, even if the dark themes playing beneath the scene tell us otherwise. When Jon Snow enters the throne room, Dany does not flinch from her actions. She doubles down on their necessity in the following exchange with Jon:

Daenerys: “We can’t hide behind small mercies. The world we need won’t be built by men loyal to the world we have.”

Jon Snow: “The world we need is a world of mercy. It has to be.”

Daenerys: “And it will be. It’s not easy to see something that’s never been before: a good world.”

Daenerys: “Because I know what is good — and so do you.”

Daenerys: “You do. You’ve always known.”

Jon Snow: “What about everyone else?” All the other people who think they know what’s good?”

Daenerys: “They don’t get to choose.”

The conversation about Daenerys’ intentions does not sit well with Jon, clearly. Daenerys Targaryen, she of so many names and titles, was always reliable for a memorable monologue. Her final one comes in the form of these words to Jon: “Be with me. Build the new world with me. This is our reason. It has been from the beginning, since you were a little boy with a bastard’s name and I was a little girl who couldn’t count to 20. We do it together. We break the wheel together.”

An impressive speech, to be sure — but Jon Snow never impressed easily. He kisses Daenerys and offers these emotional words: “You are my queen, now and always.” Then he stabs her in the heart. Daenerys Targaryen dies in the throne room, feet away from the Iron Throne that she’s sought all her life, the same throne she barely had time to touch. Her final whereabouts are unknown, as Drogon the dragon appears, destroys the Iron Throne, scoops up his mother and flies away. Dany’s final moments are a dark mirror of her first moments of life: spurred on by the murder of a royal Targaryen, forcing a swift rush to exile across the Narrow Sea — except this time, the exiled Targaryen won’t be able to mount an Iron Throne comeback.

(Unless you want to fantasize about Drogon taking Daenerys to a red priest who can bring her back to life, as Melisandre did to Jon Snow and Thoros of Myr did to Beric Dondarrion; but keep those fantasies to yourself, please.)

“We break the wheel together.” Such are the final words of Daenerys Targaryen. Emilia Clarke’s final words on the Dragon Queen come in the form of an Instagram post, which she offered up hours before the series finale aired. Here are the star’s closing remarks about her time as the Breaker of Chains and Khaleesi of the Great Grass Sea:

“Game of Thrones has shaped me as a woman, as an actor and as a human being. I just wish my darling dad was here now to see how far we’ve flown.

But to you, dear kind magical fans, I owe you so much thanks, for your steady gaze at what we’ve made and what I’ve done with a character that was already in the hearts of many before I slipped on the platinum wig of dreams. Without you there is no us.

“And now our watch has ended.”