As series creators David Benioff and Dan Weiss once wrote, and as a very evil and very dead man once said: “If you think this has a happy ending, you haven’t been paying attention.” Game of Thrones viewers came to understand those words all too well in “The Bells,” the series’ brutal penultimate episode in which Daenerys Targaryen (Emilia Clarke) stormed King’s Landing with fire and blood, killing thousands and thousands of innocent lives in the process.

Given the shocking act of violence, any illusions about Game of Thrones ending on a happy note were well and fully eviscerated, rendered ash much like the rest of Westeros’ central city. At the same time, it felt inconceivable that Benioff and Weiss would allow Daenerys to remain on the Iron Throne after such a disturbing conquest, certainly not when author George R.R. Martin and so many others in the Game of Thrones inner circle have described the ending with a single word: “Bittersweet.” An ending in which Jon Snow (Kit Harington), Tyrion Lannister (Peter Dinklage) and the others stand idly by while Daenerys rules with fire and fury would land too firmly on the side of bitterness. Even in an unhappy ending, there must be some measure of sweetness, right?

'Game of Thrones' Final Season Podcast: "The Bells" Toll Before the Series Finale

“Right,” is the thankful answer. While Game of Thrones definitely did not end as a full-fledged fairy tale, the story closed with some notes of happiness. The best news of all? We finally have resolution to the central question of the series: who will sit on the Iron Throne when all is said and done? The Seven Kingdoms’ seat of power has been at the heart of the series’ fictional universe as well as HBO’s marketing campaign from the very beginning, with countless different contenders to sit on the throne along the way. For most of the series, the Iron Throne belonged to House Lannister, most recently Cersei Lannister (Lena Headey). After Cersei’s death in “The Bells,” the Dragon Queen Daenerys finally landed on the throne, the object of her desires for so many seasons. How did the deadliest game of musical chairs in television history resolve? Look no further for the answer.

Final warning: major spoilers for the finale are ahead. 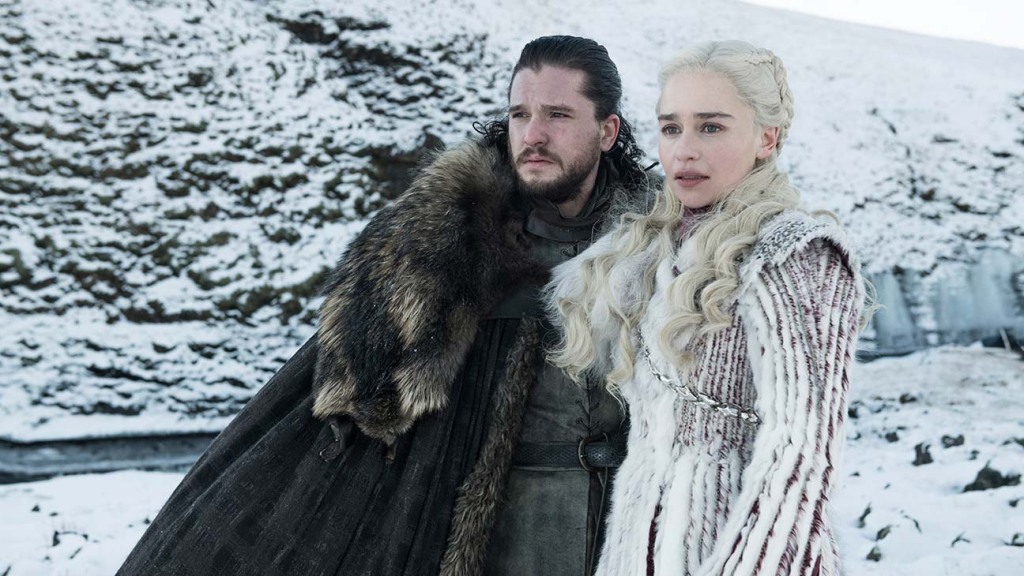 So, who’s sitting on the Iron Throne? The short answer: nobody. The slightly longer answer: there’s a new ruler, but no Iron Throne. In the words of Tyrion Lannister (Peter Dinklage): “All hail Bran the Broken, first of his name, King of the Andals and the First Men, Lord of the Six Kingdoms and Protector of the Realm.”

That’s right: Bran Stark (Isaac Hempstead Wright) now doubles as the Three-Eyed Raven and the King of the Six Kingdoms.

Much of the series finale dealt in the aftermath of Daenerys’ conquest of King’s Landing, and how the survivors reconciled her violent actions. Jon Snow’s reconciliation involved a reckoning, fueled by a conversation with an imprisoned Tyrion, who sketched out a dark vision of the future under Dany’s rule. In the episode’s most climactic moment, Jon meets with Daenerys beside the ruined Iron Throne; the Dragon Queen’s ambitions are clearly only beginning to grow.

“Be with me,” Dany implores Jon. “Build the new world with me. This is our reason. It has been from the beginning since you were a little boy with a bastard’s name and I was a little girl who couldn’t count to 20. We do it together. We break the wheel together.”

“You are my queen. Now, and always,” Jon tells her, kissing her deeply — before burying a knife in her heart.

Following Dany’s death, Drogon roars into the throne room, towering over Jon, a living mirror of the former King in the North’s previous encounter with an undead dragon. Drogon unleashes a ferocious breath of fire at the Iron Throne, melting it down to parts in a way that bookends the throne’s construction so many centuries ago, welded together by Aegon the Conqueror’s own dragon, Balerion the Black Dread.

Some time after Daenerys and the Iron Throne’s death, a group of lords and ladies gather together to decide the nation’s future. After Edmure Tully tries to toss himself into consideration, Tyrion suggests someone unexpected: Bran. 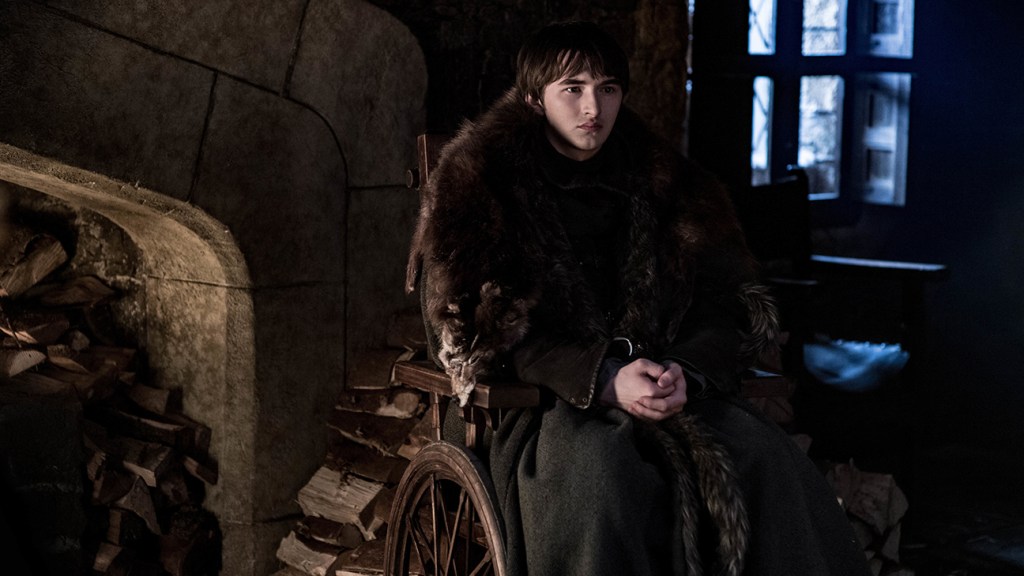 “I’ve had nothing to do but think these past few weeks,” says Tyrion. “About our bloody history, about the mistakes we’ve made. What unites people? Armies? Gold? Flags? Stories. There’s nothing more powerful in the world than a good story. Nothing can stop it. No enemy can defeat it. And who has a better story than Bran the Broken? The boy who fell from a high tower and lived. He knew he’d never walk again, so he learned to fly. He crossed beyond the Wall, a crippled boy, and became the Three-Eyed Raven. He is our memory, the keeper of all our stories. The wars, weddings, births, massacres, famines. Our triumphs, our defeats, our past. Who better to lead us into the future?”

Tyrion asks Bran if he’s up for the task. Bran replies calmly: “Why do you think I came all this way?”

Author George R.R. Martin’s A Game of Thrones, the first book in the A Song of Ice and Fire novel series, features Bran as the first main point-of-view character. In interviews, Martin has said that the first scene he ever envisioned for the series involved Bran watching his father execute a man in the bitter cold north, an early example of what it means to rule justly. “The man who passes the sentence should swing the sword,” the late Ned Stark (Sean Bean) told Bran on that long ago day. It was always an instructive piece of dialogue for the greater themes of Game of Thrones; in hindsight, it’s fitting that Martin’s first imagined scene in the world of Westeros wasn’t just meant to instruct the readers about his sense of justice, but also designed to instruct the future king of the land.

Of course, Martin’s unwritten ending to A Song of Ice and Fire and the Game of Thrones series finale are sure to diverge in meaningful ways, though it’s believed the critical landing points are the same — and there’s no landing point more critical than Bran as the king of King’s Landing. 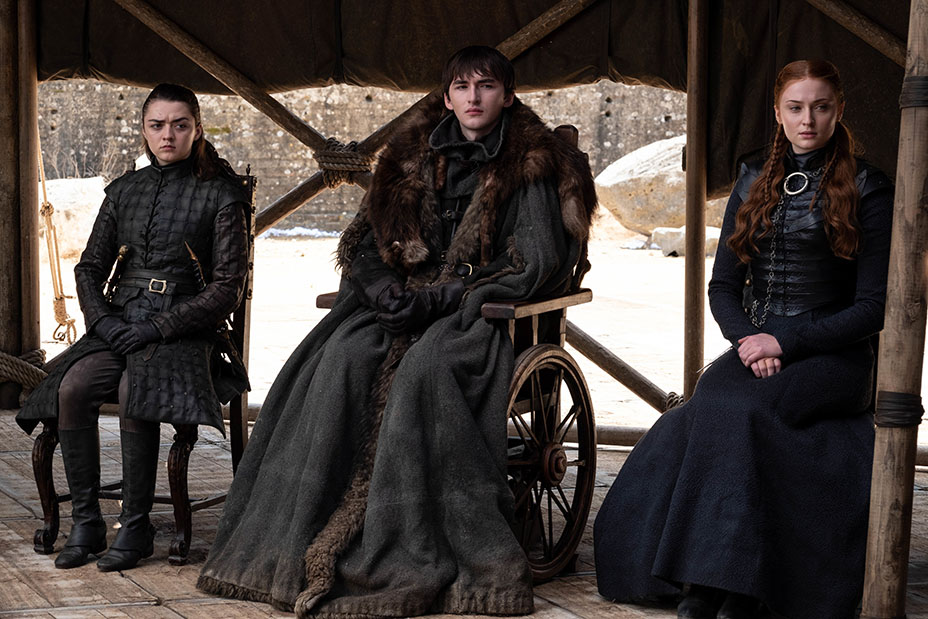 Here’s how Game of Thrones ended for each of the main characters:

• Jon Snow (Kit Harington): After killing Dany, Jon is sentenced to spend the rest of his days at Castle Black. In the closing moments of the series, he instead decides to voyage beyond the Wall with the Free Folk — and yes, he gives Ghost a pat.

• Daenerys Targaryen (Emilia Clarke): She dies at Jon’s hand, but her story does not end there. After Drogon melts down the Iron Throne, the dragon scoops up Daenerys and flies off for parts unknown. Is it possible that the Lord of Light has a disciple somewhere out in the wild who can breathe life back into Dany, much as Melisandre (Carice van Houten) once did for Jon? We will probably never know, but feel free to hold onto the dream.

• Tyrion Lannister (Peter Dinklage): The former acting Hand of the King to Joffrey Baratheon (Jack Gleeson), then Hand of the Queen to Dany, ends the series once again as Hand — this time serving Bran. He’s not exactly pleased about the new job, promising Jon he will one day visit Castle Black so he can once again piss off the edge of the world. Tyrion’s last line of the series is one we have heard before: “I once brought a jackass and a honeycomb into a brothel.” Alas, still no punchline.

• Arya Stark (Maisie Williams): “What’s west of Westeros?” It’s the question Arya once wondered aloud back in season six. Now with a new lease on life, she aims to find out. She ends the series setting out on a ship to discover undiscovered country, a Stark sigil on her ship’s sail.

• Bran Stark (Isaac Hempstead Wright): “King Bran the Broken, Ruler of the Six Kingdoms and Protector of the Realm. Long may he reign.”