[This story contains spoilers for the series finale of HBO’s Game of Thrones.]

Jon Snow (Kit Harington) cheated death once. The 998th Lord Commander of the Night’s Watch sustained a knife to the heart in Game of Thrones‘ fifth-season finale, only to return two episodes later to weather more violence: first, “The Battle of the Bastards,” in which he and Sansa Stark (Sophie Turner) won back their ancestral home of Winterfell, and later “The Long Night,” in which he and the allied forces of the living banded together to save Winterfell and the rest of humanity from the White Walkers.

In the end, Jon wasn’t much use in either of those specific conflicts. He survived them both, sure, but on both occasions, he deviated from the carefully laid plans and nearly died as a result. Jon’s sisters Sansa and Arya (Maisie Williams) won the battles against Ramsay Bolton (Iwan Rheon) and the Night King (Vladimir Furdik), through hard-earned alliances and assassination skills, respectively. Jon, meanwhile, spent those wars facing down the very notion of mortality: birthed from a mosh pit of corpses in “Battle of the Bastards,” and pinned down by an undead dragon in “The Long Night.” At the time, both of those fights felt like futile and frustrating uses of Jon Snow, Game of Thrones‘ closest thing to the traditional fantasy hero archetype, what with his powerful sword and his secret claim to the Iron Throne — a claim that directly challenged the love of his life, Daenerys Targaryen (Emilia Clarke). If Jon wasn’t going to be the man who saved the world, then what was the whole point of his death and resurrection?

The question mirrors a moment from “Beyond the Wall,” season seven’s penultimate episode, in which Jon and fellow former dead man Beric Dondarrion (Richard Dormer) bonded over their unique relationship with mortality. The Lightning Lord was as confused as Jon about why the two of them were still standing when so many others were dead and gone. But he was pretty sure about one thing: their common goal.

“Death is the enemy, the first enemy and the last,” said Beric. “The enemy always wins, and we still need to fight him. That’s all I know. You and I won’t find much joy while we’re here, but we can keep others alive. We can defend those who can’t defend themselves.”

“I am the shield that guards the realms of men,” a thoughtful Jon responded, reflecting upon his own former oath as a man of the Night’s Watch. “Maybe that’s enough.”

Now, Game of Thrones‘ watch has ended, and the questions that have flowed within the veins of the Jon Snow storyline finally have some answers. What was the purpose of his Targaryen roots? Was he destined to become the King of Westeros? How would his reluctance to take on the Iron Throne hold in the light of Daenerys’ rampage against King’s Landing? If Jon’s true purpose was to guard the realms of men, then what would it mean for Game of Thrones‘ very own Captain Westeros to wield the shield? 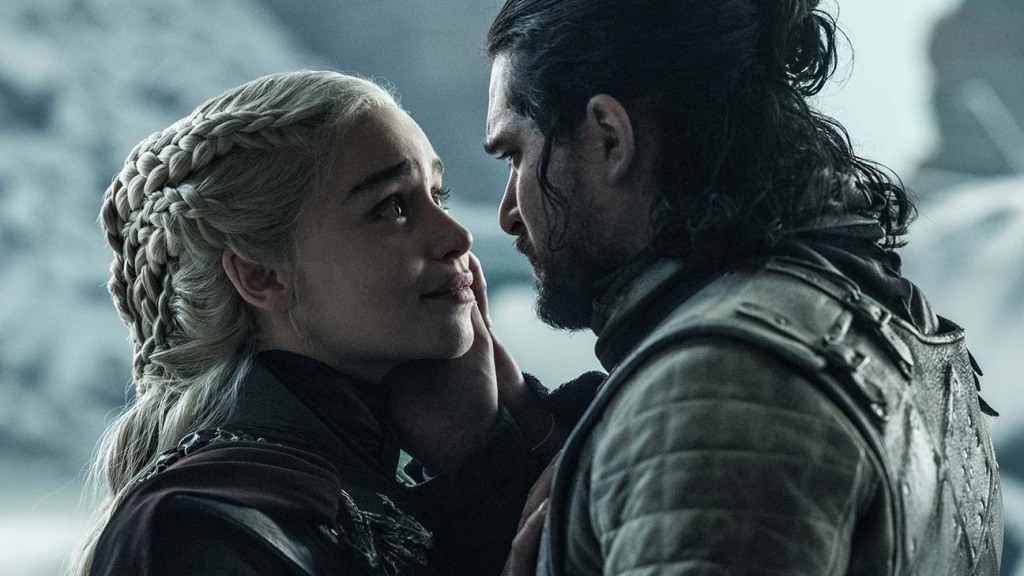 Tackling that last question first: wielding a shield meant wielding a dagger. Snow boasts the only kill of the series finale, assassinating Dany in the bitter cold throne room, mere feet away from the powerful seat she coveted so long. It’s a move stemming from Jon’s simmering doubts about Dany, which fully boiled over after “The Bells,” vocalized in conversation with Tyrion (Peter Dinklage).

“When she murdered the slavers of Astapor, I’m sure no one but the slavers complained,” Tyrion tells Jon, the two of them speaking in the once and future Hand of the King’s makeshift prison cell. “After all, they were evil men. When she crucified hundreds of Meereenese nobles, who could argue? They were evil men. The Dothraki khals she burned alive? They would have done worse to her. Everywhere she goes, evil men die and we cheer her for it, and she grows more powerful and more sure she is good and right. She believes her destiny is to build a better world for everyone. If you believed that, if you truly believed it, wouldn’t you kill whoever stood between you and paradise?”

Before moving on, Jon recalls the words of another man familiar with ice and fire: the late Aemon Targaryen (Peter Vaughan), who once told Jon that “love is the death of duty.” Aemon shirked his own duties as heir to the Iron Throne, paving the way for his unlikely brother Aegon to assume the crown and create the people who would cause so much of Westeros’ present turmoil: the Mad King Aerys, his children Rhaegar and Daenerys, and his secret grandson — another Aegon, more commonly known to us as Jon Snow.

Tyrion, Beric, Aemon … all of them are soldiers of fortune in their own rights, who have weathered their respective wars and walked away with their own respective wounds. Love and duty, tested for all of them. For Jon Snow, a man who hails from the honorable Ned Stark by nurture if not quite nature, duty has always won the day — and if stabbing one beloved heart was going to serve as the shield that guards the realms of men? Indeed, maybe that’s enough.

After killing Daenerys, Jon spends weeks in a prison cell, somehow evading execution at the hands of a vengeful and violent Grey Worm (Jacob Anderson). When he’s finally released, Westeros’ status quo has changed: Bran (Isaac Hempstead Wright) is king, Sansa is queen of the North, and Jon’s allowed to escape his royal destiny altogether, with an asterisk: he’s forced to return to Castle Black, where he will live out his days on the Wall.

Given what we know about Jon Snow, the story could well have ended there. Castle Black boasts some familiarity for the man, after all; it’s a pleasant enough existence for someone whose ambitions were never bigger than doing what’s right. Granted, the Jon we’re left with doesn’t quite know if he’s done what’s right in killing Daenerys — so it makes some sense that the final version of Jon Snow ultimately veers away from the “right” path, and instead follows his own path.

From certain viewpoints, Jon Snow was the prince who was promised, the man who was destined to wear the crown and rule Westeros. But he never wanted any of it. What he got instead was an active role in deciding a new fate for the realm, one in which royal lineage stopped being the deciding factor in the way of the land. (Is the wheel fully broken? I’d argue it’s not, but your mileage may vary.) Jon winds up in a position where he rejects the crown with one swift kill, sentencing himself to a lifetime of service back on the Wall.

But there’s another crown Jon earned along the way — a crown that belongs on the other side of the Wall, where he had that conversation with Beric not so long ago. Speaking with the Lightning Lord in that ill-advised mission to bag a wight and bring it back to King’s Landing as proof of the Night King’s threat, Jon and the others breathed wild air, cheeks flush with the cold — and for a man who had died not terribly long ago, Jon Snow never looked more alive. For a man who knows what death looks like (namely, that it looks like nothing at all), perhaps it’s a happy ending after all that he ultimately chooses to disobey orders and instead return to the place where he felt the most alive.

“That’s why we all agreed to follow him,” Tormund Giantsbane (Kristofer Hivju) said about Jon back in “The Last of the Starks,” a coronation speech of sorts. “That’s the kind of man he is. He’s little, but he’s strong. Strong enough to befriend an enemy and get murdered for it. Most people get bloody murdered, they stay that way. Not this one! He comes back and keeps fighting. Here, north of the wall and back again. He keeps fighting. He climbed on a fucking dragon and fought! What kind of man climbs a fucking dragon? A madman — or a king!”

In the end, Jon Snow rejects the crown he was meant to wear from birth. Jon Snow, more a product of his nurture than nature, instead chooses the crown he earned: one that lies in the “real North,” as Tormund would say. In the closing scene of the series, Jon abandons Castle Black alongside the Free Folk, comfortably leading them back into the Haunted Forest where the first grisly Game of Thrones scene took place. There are no more White Walkers to fear, thanks to Jon’s role in rallying the realm against the Night King, if not quite killing him — and even if there are still dangers somewhere out there, there’s certainly less to fear now that Jon Snow, former Lord Commander of the Night’s Watch, former King in the North, the man who was supposed to be King of the Seven Kingdoms, now rides forward with a new title: the King Beyond the Wall. Long may he reign. 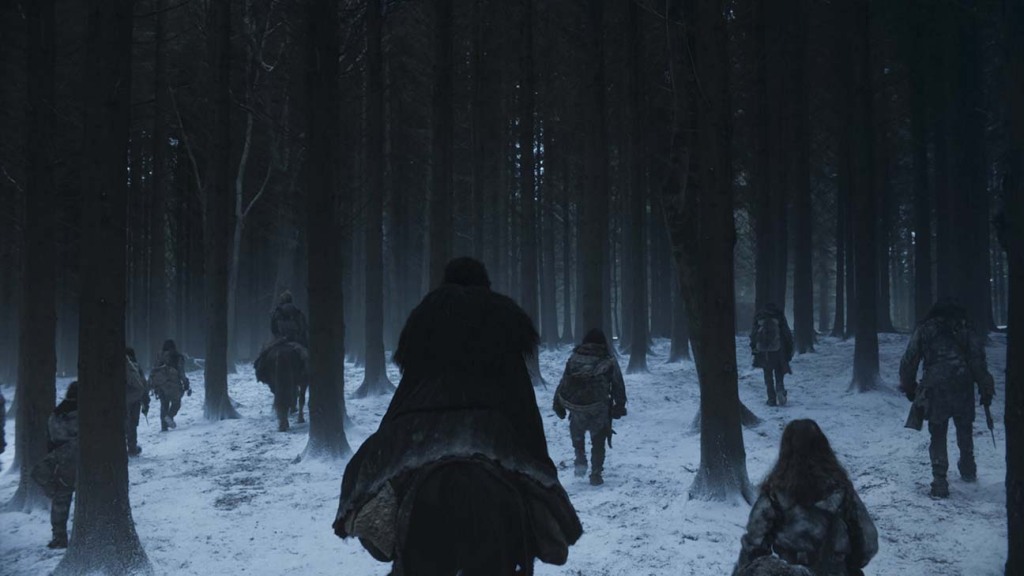