Yes, really. A full calendar year since Game of Thrones ended. It’s true what they say about time and flying, as swiftly as if it were thrown out the moon door.

David Benioff and Dan Weiss’ Emmy-winning, record-smashing, epic fantasy adaptation of George R.R. Martin’s even more epic fantasy series A Song of Ice and Fire reached the end of the line on May 19, 2019, a before time that gives all new meaning to the phrase “sweet summer child.” The rage and pain some fans felt after feeling burned by the events of the final season pales in comparison to the rage and pain being expressed on the internet in today’s day and age.

'Game of Thrones' Prequel 'House of the Dragon' Trailer Revealed

Or… maybe it’s not so different after all.

It’s a funny thing about anniversaries. Everything pervasive and impossible comes to a screeching halt in the face of an evocative memory, even if it’s only for a blistering five minutes, time enough to fire off a scalding hot “worst. finale. ever.” tweet into the ether. It should come as no surprise that the one-year marker of Game of Thrones’ conclusion remains paired with the same level of snark applied to the final season itself: mocking memories of King Bran the Broken, Daenerys Targaryen foolishly flying one of her two remaining dragons into a volley of arrows, said arrows’ capabilities of bending around mountains only making sense if The Matrix‘s rules of physics apply, said Dragon Queen’s furious destruction of King’s Landing because whyyyyy, and let’s not even get into the coffee cup. Some people are happy with how Game of Thrones ended. Some people are displeased, but at least at peace.

Me… I’m not there. Not yet. And I’ll try to articulate why, though fair warning, what I’m about to write is very personal to my specific experience as a Game of Thrones reporter, and as such it’s entirely possible that none of what I write from this point forward will make a lick of sense.

With that said, feel free to skip along and celebrate your Thrones finale anniversary as you see fit. Me? I’m going to take off some bandages and re-examine the (puts on sunglasses) wounds of winter. 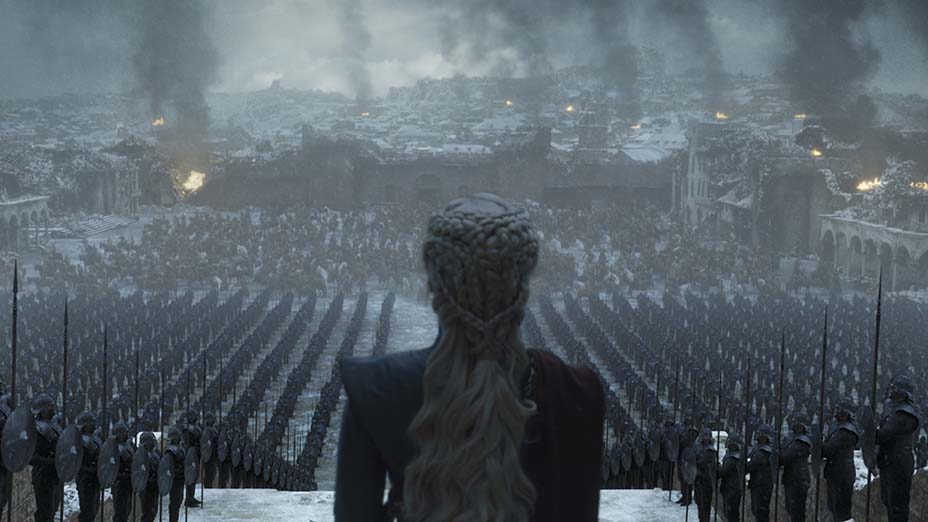 OK, so, hi. I’m Josh Wigler, Game of Thrones reporter for The Hollywood Reporter. You may know me by my byline, even if you do not know me. I write about the nerdy things here on THR. I podcast about ’em elsewhere. I like cats the way Dany likes dragons, and I like pizza the way the Mountain likes crushing brains.

I also like Game of Thrones, even if I do not come to this world as a deep-cut fan from the long, long, long ago. I wasn’t reading A Game of Thrones when it first dropped in 1996. I didn’t read word one until 2011. I found Thrones through my job. I never watched the show purely as a fan. When the first season was announced, a friend and colleague implored me to get ready for what was almost certainly going to be a Very Big Deal by checking out Martin’s books. (That colleague: Terri Schwartz, then my partner in crime at MTV News, currently a Very Big Deal at IGN.) And wow, was that a great recommendation. I loved those books, deeply. I read them all before watching the first season, voraciously consumed A Dance With Dragons as soon as it came out a few weeks past the first season finale, and I’m still patiently tapping my foot, ready to consume Winds of Winter whenever Martin gets to it.

(Yes, whenever, not if ever. Dark times these days, folks. Let’s try some optimism on for size.)

But the show itself was always a gig. It came with interviewing the folks in charge, the castmembers who brought these characters to life. Some of my all-time professional highs are associated with Game of Thrones. Helping to bring this essay from Isaac Hempstead Wright to life has to chart as No. 1 on the leader board, as far as specific, singular Thrones pieces. But the most important life-changing result of the show was and remains my recruitment into The Hollywood Reporter fold right before season six, with the specific aim of covering all things Thrones and all things Thrones only — a job I apparently did well (or at least thoroughly!) enough that I’m still producing bylines ’round these parts nearly five years later, with some of my very favorite friendships forged right here in the THR word mines as a result. (If everyone in the world had a friend and mentor like Lesley Goldberg, we would all be better off.)

Those are the things I treasure most about Thrones. (It really was the friends we made along the way! Who knew?) But the night is dark and full of terrors, too, and the terrors include so many weeks of sleepless nights watching, writing, watching again, writing some more, and otherwise breathing and drinking nothing but pure Westeros all day and night without interruption. Some of the articles written in those times are among my very personal favorites. (HBO, if you’re still not sure about making a direct sequel, call me. I’ve got ideas!) Some of the articles written in those times … I truly could not tell you whether or not they exist. You could tell me I wrote an accounting of the 20 best Game of Thrones F-bombs and I would believe you, even though I’m pretty sure I didn’t write such a thing, but maybe I did? I really don’t know. That entire block of time is such a whirlwind and so closely associated with sleeplessness, over-investment and burn-out on a level that I felt like, and still feel like, only a few people in the world could truly understand.

I could go on and on about it, but there’s nothing I can say on the subject of conflicted Game of Thrones feelings than the great Kim Renfro at Insider didn’t already say better in this piece — particularly about how covering this show on such a granular level was utterly joyful and utterly painful all at once. Break out the world’s tiniest violin and play “The Rains of Castamere” on it; I know, it’s uncool to complain about covering television for a living, and I get it, but that doesn’t mean there aren’t significant emotional and mental health stressors that come with the job. Get to know me offline and I’ll happily tell you all about the ways in which both this show and my professional relationship to it enriched and annihilated me, and then you will happily lose my number because why is he complaining so much about television.

But one thing that stands out and resonates most with me from Renfro’s piece — and wow is there a lot — was the idea that it’s possible to love something and feel intensely critical of it simultaneously. This has been my entire journey with another beloved show that’s meant more to me for much longer than Thrones ever did, one that causes me ongoing whiplash feelings of enrichment/conflict, and one that I’m only now starting to reach some level of peace with. And while there’s no way I would have written so much about Game of Thrones without some significant love for the game, I don’t find myself feeling compelled to defend its needlessly action-packed and rushed final run of episodes. Maybe I did a year ago. Today, I do not.

Indeed, I do not feel compelled to regard Game of Thrones at all right now, except for the fact that a year has officially passed, and today, we’re living in the world of … well, today, and what else is there to do but rage?

Oh, wait, that’s right: there’s a lot more to do than rage. 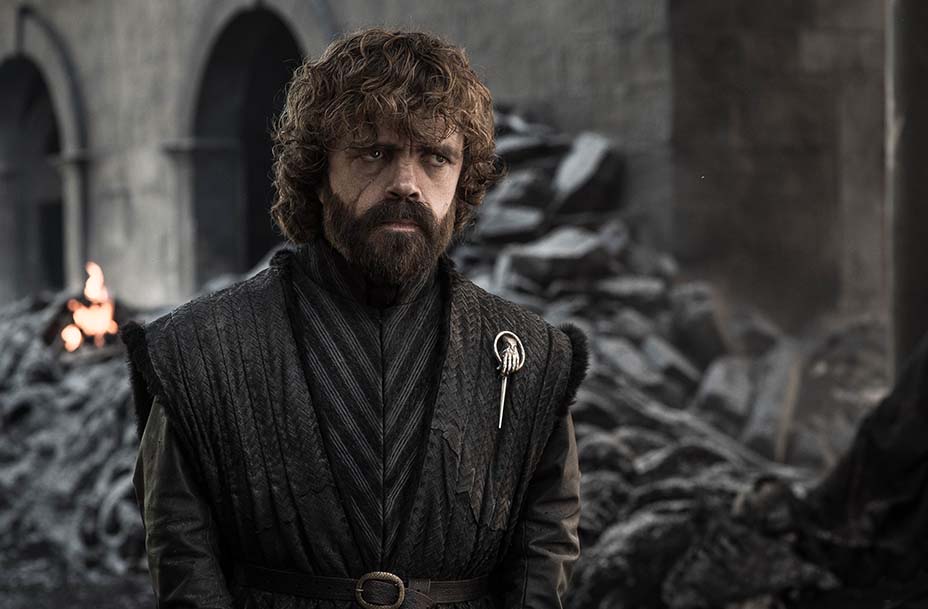 There are old television treasures you have never explored, waiting for your eyes. There are books even set in the world of Westeros that are ready to capture your heart, if you’re such a Thrones fan that you miss the series and its potential, but never read the source material. There are other books to be read that have absolutely nothing to do with dragons at all, there are hobbies to be undertaken, there is bread to bake, Hot Pie style. There is still so much to do even within our seemingly limited lives right now, at least so many options better than raging about a year-old show.

They say time heals all wounds. Maybe that’s true. Some wounds? I’m not sure. I do think the Game of Thrones wounds are healable, certainly for me. When House of the Dragon inches closer to reality, I’ll be ready for it. That’s a while from now. By the time it’s a reality, I’ll have thoroughly plumbed Fire and Blood, the fictional history book on which the show is based; I’ll have revisited USA Network’s Colony, the criminally underrated and under-watched science-fiction series from Dragon co-creator Ryan Condal. (I advise you to do the same. It’s a great show and it gives you great insight into the ways Condal views life and death as a storyteller.)

When the time comes, I will be ready to go — but I’m not ready. Not yet. I’m not ready to reassess the Dany arc, I’m not in the mood to mount any kind of defense for the final season’s pacing and the extremely complicated behind-the-scenes mechanics involved in the bitter disappointment so many people felt — I’m not ready for any of that.

And the good news? I don’t have to be.

Winter was here. Now it’s not. It’s somewhere back there, in the rearview, accessible if you wish to access it. The slopes will be ready for you whenever you are. If you feel you’re ready right now, whether with gleeful nostalgia in your heart or vengeful bile in your gut? Have at it. For me, it’s plenty warm right here in this cabin, far from Westeros, with so many other stories to consider and peruse, both new and old. We even have coffee — and yes, it’s here on purpose.

With all that said, if you do choose to go full Westeros right now, do me a favor? Search the 500 some-odd articles I’ve written about Game of Thrones, and let me know if that piece ranking F-bombs is real or not — because if it’s not real, then maybe I should write it?

See? Not ready yet! Brain the Broken, signing off.