At long last, Arya Stark (Maisie Williams) has returned home — and it’s not exactly the homecoming she was expecting.

In their Inside the Episode interview for “The Spoils of War,” Game of Thrones showrunners David Benioff and D.B. Weiss weighed in on the scene in which Arya finally makes it back to Winterfell, reuniting with her sister Sansa (Sophie Turner) and brother Bran (Isaac Hempstead Wright) for the first time since the show’s first season. But coming home isn’t all it’s cracked up to be, as Arya quickly realizes once she passes through the gates into Winterfell.

“I would hope that it stirs some emotion in you, that this girl who has been through what she’s been through and has experienced many of the insane and awful things she’s experienced, and come out the other side stronger for it, is finally coming home,” said Weiss. “But the second she comes home, she realizes that it’s not the same place.”

Benioff added that the crucial scene in Arya’s homecoming sequence is her first meeting with Sansa in the crypts of Winterfell. As the two sisters size each other up, they both realize that “they’re very similar to who they were, except even more so.”

“Sansa always wanted to be a lady and Arya always wanted to be a fighter,” he said. “In other ways, they are so different from who they were when they last saw each other. Both of them have had difficult journeys, and difficult in their own ways. I think they come to respect the other in terms of how they’ve grown as people, but at the same time, it doesn’t diminish the tension between them.” 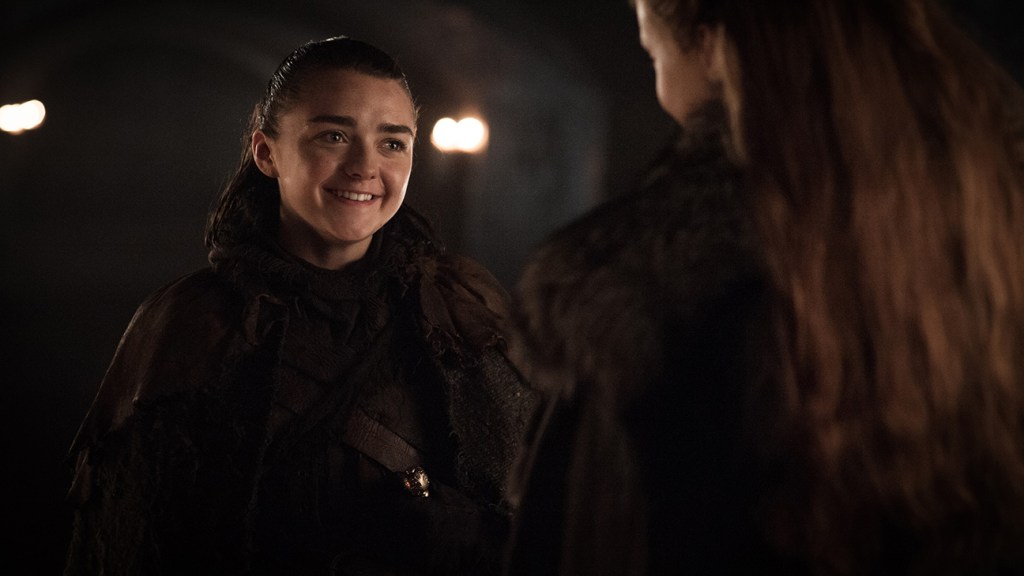 As for that tension, Benioff and Weiss hint at something dark simmering between the Stark sisters, as highlighted in Arya’s sparring session with Brienne of Tarth (Gwendoline Christie).

“The idea with the scene was we wanted to lay in the beginnings of the storyline where Sansa realizes what Arya is now,” said Weiss, with Benioff adding: “Sansa doesn’t know much about where Arya’s gone and what she’s done since they last saw each other. This scene more than anything else tells her what she’s been up to. The fact is, Brienne is a pretty legendary swordswoman, and it looks like Arya maybe beat her. Sansa’s watching and isn’t quite sure if Arya is holding back. Arya is really good at killing people. That’s a bit worrisome.”

It is indeed worrisome, if not altogether surprising. In the third episode of the season, Arya ran into her direwolf Nymeria on her way back to Winterfell. The two parted ways, with Arya delivering the somewhat confusing line: “That’s not you.” In many ways, the scene suggested that even if Arya returned to Winterfell, there would be no such thing as truly coming home. Given their comments on Arya’s actual homecoming, it sure sounds like the young wolf won’t acclimate to her pack so easily even now that she’s back in the North.

Watch the video below for more of Benioff’s and Weiss’ thoughts on the episode, including the growing attraction between Jon (Kit Harington) and Daenerys (Emilia Clarke), and the emotional tension fueling the episode’s epic battle sequence.