Winter is here, but for Varys (Conleth Hill), the bigger threat is what lies in the flames.

The smooth-talking strategist holds a lifelong hatred for magic, thanks to the role it played in the most traumatic and tragic moment of his life: castration as part of a magical sacrifice. As if the physical injury wasn’t harmful enough, Varys also heard a voice speak to him from the sacrificial flames, a secret he has told very few people — but a secret some people seem to know anyway, like Kinvara (Ania Bukstein), the red priestess who challenged Varys during season six.

It was the most unsettled we have ever seen Varys through five seasons and change. The latest episode of Game of Thrones managed to top that level of discomfort, as Melisandre (Carice van Houten) offered an even more frightening warning: “I have to die in this strange country — just like you.” Prophecies don’t always play out perfectly in this tale, but some version of the prediction often comes to pass. In other words, it’s well worth worrying for Varys‘ safety, just as Varys himself is clearly concerned.

For more on the scene, The Hollywood Reporter spoke with Hill, the actor who has brought Varys to life over the last several years of Thrones — the same actor who was forced to seriously contemplate his character’s death, thanks to this scene. Luckily, there was one silver lining…

If you’re going to have your death ominously forewarned, is there a better place to hear such news than that Dragonstone vista?

You know what? I’m so glad you said that. That’s about five miles away from where I live. I was born and brought up there, and played there all of my life. Last autumn, we were up there filming, and my younger brother [Ronan Hill] was doing sound. He’s a three-time Emmy Award-winning sound man, among other awards. And it was myself. It was just the surreality of this experience — eight years of it, coming to a head. I was so glad when it aired, and I could finally tell people, “That’s where I’m from! That’s how beautiful it is.”

That’s fantastic. And where exactly was the scene filmed?

If you look at a map of Ireland and you look at the northeast, you’ll see a town called Ballycastle. To the right of it is a huge headland called Benmore, or more commonly called Fair Head. That’s where they filmed that scene with Melisandre, the beautiful Carice. It was the only thing that took the sting out of having my card marked, filming it there.

It’s a great scene, because we’re so used to seeing Varys fully collected. It’s very unsettling to see him so unsettled.

That’s interesting. I never thought about it that way. It’s kind of unsettling for you as an actor, too. You go, “Oh, God, is this it?” Because of Hodor (Kristian Nairn) and everything. As soon as Hodor happened, I went, “Oh, God, I bet I have to hold a door at some point.” (Laughs.) Just because of the scenes we shot through the years about the sacrifice and everything, and Varys heard something [in the flames]. I hope that’s not exactly what it is, but it’s ominous, yeah.

Prophecies don’t always play out exactly on the show, but usually some version of those predictions comes true.

Yeah. And does Varys take this to heart, or does he get on with his life? I don’t think he has very much respect for the red priestesses, so there’s an argument that he won’t take it to heart. It’s the familiarity, that trick of we know what you said, that gets him every time. It’s something he can’t really be logical about. His distaste of their human sacrifices and all of that is perfectly alright. But I don’t know what the sorcerer said [to Varys when he was castrated]. I’ve never been told. I’ve never read it anywhere.

In your mind, did you create a version of what the flames said? Or was it enough to know that whatever it was is deeply troubling?

Yeah. In the books, I think it’s said that he couldn’t understand what was said. If you take that version of the book and put it with Kinvara, the red priestess, who said, “Do you want to know what was said?” Maybe he doesn’t remember or know specifically what was said, but he knows it said something, and that’s what freaked him out. The fact that these red priestesses know … I think in this story, the only person he’s told is Tyrion (Peter Dinklage), and I don’t think Tyrion would betray him and wind him up. So, it’s pretty ominous. But you know, at this stage? None of us are getting out of this alive. (Laughs.)

'Game of Thrones' Podcast: Will Jon Snow Ever Learn His Secret Origin?

Do you think Varys disdains magic because he believes in it?

No, I think it’s because they hurt him when he was a child and left him for dead. To me, that’s a logical follow-on, because of how he was treated by red priests or priestesses, he would have an aversion to them for the rest of his life. Even if they have a validity in this plot and within the story, I don’t think he’ll change his mind.

It’s too deeply rooted for him.

Yeah. If you were abused as a kid, isn’t it possible you would still hold onto the hate for the people who did that to you? Magic within the story is so different. We’ve seen the red priestess breathe life into Jon Snow (Kit Harington), or she was there when he came alive, and some of her prophecies have been pretty accurate. But not all of them. That’s the only thread to hang onto. “Maybe she got that one wrong!” 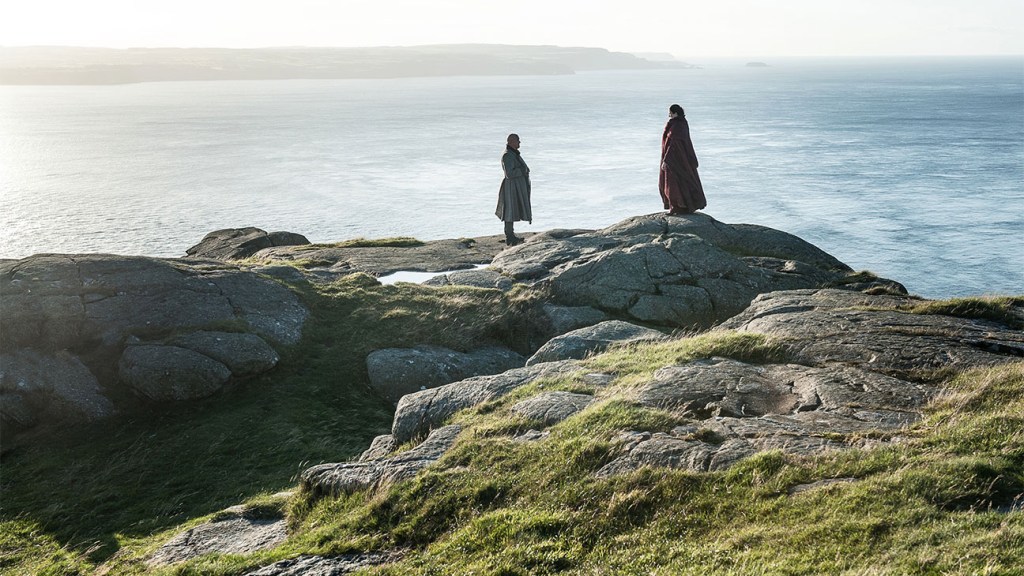 Speaking of Jon Snow, we haven’t heard what Varys thinks of him yet, but we know he had some measure of respect for Ned Stark (Sean Bean). How do you imagine Varys views the King in the North?

I think he would be okay with him, yeah. I’m sure it will unfold, but I think he had a soft spot for Sansa as well. He kept trying to get her away from Littlefinger before he took off with her. I think he likes the Starks and thinks that they’re decent and good people. The fact that Melisandre is hiding from them probably puts them up in his estimation.

You and Emilia Clarke enjoyed your first really extensive scene between Daenerys and Varys this season. What was it like to go up against the Mother of Dragons?

It was fantastic. It was brilliantly directed by Mark Mylod. I have so much admiration for Emilia. She’s the first one in every morning and the last one home every night. She works so hard. She’s word-perfect. She’s wonderful to work with. It was great fun. And I think it was a long time coming, that scene. Why we didn’t have that conversation on the boat — who knows? (Laughs.) Why we didn’t have it in Meereen — who knows? But it was really enjoyable and lovely to work with her.

Do you think Varys was ever concerned that he wasn’t going to win that argument?

I don’t know. Maybe a little bit. He does seem to be a lot more to the point now. Maybe that’s because of the threat [she made] that was so imminent. But he’s the one who rescinded the order to murder her. He’s helped through the years. And I think he helped her escape as a baby, although I’m not 100 percent sure about that. He’s always been very honest about his admiration for the Targaryens. Also, the book plot is different than the TV plot. There’s no king in waiting here. In the books, there’s a young prince they think is the new Targaryen, but we didn’t use that story in the TV [show]. None of us know what happens, but it was very exciting. He’s been consistent. Whether he’s lying or not — who knows? I hope not. But he’s been very consistent over the last few seasons with saying, “I want to help the people.”

Have you enjoyed playing such an openly benevolent side of Varys? Is that a fair way to characterize him, even?

I think it is. I think some of the stuff he had with Tyrion on the way to Meereen was some of the best stuff: “We’ll never be leaders, people like us.” He’s very aware of his place in the world and how he’s looked on by others. He’s also very aware that information is so much more powerful than money sometimes. But I think he’s been consistent. We’re not leaders, but we can help those who do lead, and we can counsel those who lead. He and Tyrion managed to stop Daenerys from invading, which I think would have been her gut reaction, just to go out all guns blazing.

You mentioned the differences between the show’s version of Varys and the books’ version. Is there anything from the books you wish you could have brought into the show?

No, and it’s the exact reason why I never read the books. It’s nothing to do with laziness. I knew from the very beginning that I’m doing [David Benioff and Dan Weiss’] version of Varys. I didn’t want to read stuff in the books that didn’t appear on the show. I think that would have disappointed me. I was employed by HBO, Dan and David to do that Varys, not the Varys of the books. But George R.R. Martin wrote me a brilliant letter when I was first cast, telling me how he saw the character. I tried to stick with that. It wasn’t a huge amount of information, but it was just enough to get you from scene to scene — and when it’s all over, I’ll tell you what he said.