[Warning: This story contains spoilers for the second episode of Game of Thrones‘ seventh season, “Stormborn.”]

There are few things more frightening in the Game of Thrones universe right now than Euron Greyjoy, but actor Pilou Asbæk’s unbridled enthusiasm for playing the monstrous character might be one of them.

Before he arrived on the Iron Islands in season six, Asbæk was already immersed in the world of Westeros. He was a fan of Thrones well before joining the cast, so much so that he ranks watching the Red Wedding as one of his top three most memorable film and television viewing experiences. With those credentials on the table, Asbæk takes his role as the show’s newest nightmare figure very seriously — almost too seriously, based on some of his war stories from shooting the climactic naval battle sequence from this week’s episode, “Stormborn.”

In this interview with The Hollywood Reporter, a very enthusiastic Asbæk offers a look into the mind of the man who brings the Pirate King of the Iron Islands to terrifying life: what he loves about Euron, the different sides of the character he’s trying to highlight, his own brutality while filming this latest action scene, what a wedding between Euron and Cersei (Lena Headey) might look like, and more.

(Big laugh.) That’s all thanks to the writers. It always goes back to the writers, if you ask me. It sounds wannabe humble, but I swear it, honest to god. I’m married to a writer. My best friends are writers. I wanted to be a journalist myself. In my opinion, it’s always the goddamn writers. I wish it was different. I wish it was the actors! But it’s not. It comes from those sick brains in L.A., all of it.

How excited were you for people to see this huge battle sequence? We’ve seen Euron talk the talk, but now we’re seeing him walk the walk.

It was fun, man. I knew it when I read the scripts. When you get a chance to read the whole storyline, you start to have an idea: “What am I a part of?” I knew I was a part of Game of Thrones. I’ve seen all the episodes. I was a massive fan for five seasons. I haven’t seen seasons six and seven though, because now I know all of the tricks, and I want to see it when it’s all done, and I don’t want to have to sit there and wonder, “Why did you do that?” It’s still a positive experience. For me, I knew that in the second episode, he was going to be brutal. He’s going to kill the Sand Snakes with their own weapons. So let’s make him charming in episode one. Let’s make him fun. I’ve called him a “douchebag,” and he is, but I love the guy. I think he’s funny. Whenever you create a character that’s based on the books and based on [author George R.R.] Martin’s ideas, with all respect to the Euron Greyjoy of the books, you have to do something else. It’s very difficult to do an adaptation of people’s imagination. I can never satisfy all the readers of Martin’s books. I can never create a 100 percent accurate image of your idea or your version of a character. But I can do the best I can and show as many different sides of this character as possible. And that’s what I wanted to do in season seven. 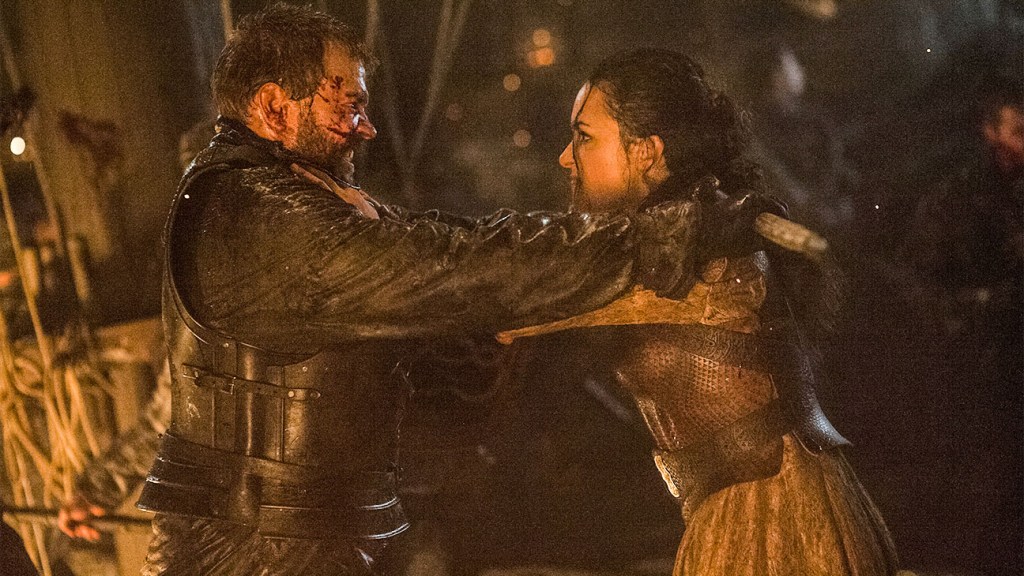 There are definitely differences between the Euron of the books and the Euron of the show, but here’s one common bond: They are both nightmare made flesh. These are the people who haunt you in your dreams.

But he’s human, too. And that’s the interesting part of my job. In Game of Thrones, there have been some iconic villains: Joffrey (Jack Gleeson), Ramsay (Iwan Rheon), just to name a few. They have been so iconic. They have been the definition of evil. I love how they created those characters. I can’t do the same thing. I have to do something else. I wanted to create a guy who is going to invite you out for a drink, sleep with your wife and slap you afterwards. And maybe not even slap you: He would probably just kill you. (Laughs.) He wouldn’t even blink. He wouldn’t even flinch. It’s in his DNA. It’s his nature.

Euron comes sailing into this battle, ax in hand, which is a nod to another Greyjoy brother from the books, Victarion. For you, what makes the ax an appropriate weapon for your vision of Euron?

All the good warlords charge in first when they go into a battle. They have to inspire. They have to illustrate more fear than anyone else. What’s more brutal than an ax? I loved that it was his preferred weapon. We trained that battle for weeks. It took two weeks training with Rowley [Irlam], the stunt coordinator. We would rehearse with [stuntman Vladimir Furdik], who also plays the Night King, who I killed on the boat as well.

Oh, so you killed the Night King? Mission accomplished, then! You saved Westeros!

Exactly! (Laughs.) That’s the other side of stunts: You get killed a lot of times in the same episode. Here’s a funny story I haven’t told anyone else. We were shooting for four, five or six days, and I was so into it, because it was so much fun. I come from Denmark. We don’t do this kind of thing. We don’t have this kind of scale. We don’t have these budgets. We don’t have so many extras and stunt people and boats and ships and green screen. We don’t have this shit! So I was like, “Fuck it, man. I’m going Euron on these guys when we’re shooting.” And I was swinging my ax to the left and to the right like a fucking maniac, so much so that they had to come up to me after the takes and say: “Dude, chill out. You’re going to break our ribs.” (Laughs.) But that’s because it was fun!

That manic energy we’re seeing in Euron in that scene, then, was pretty authentic to what you were feeling? 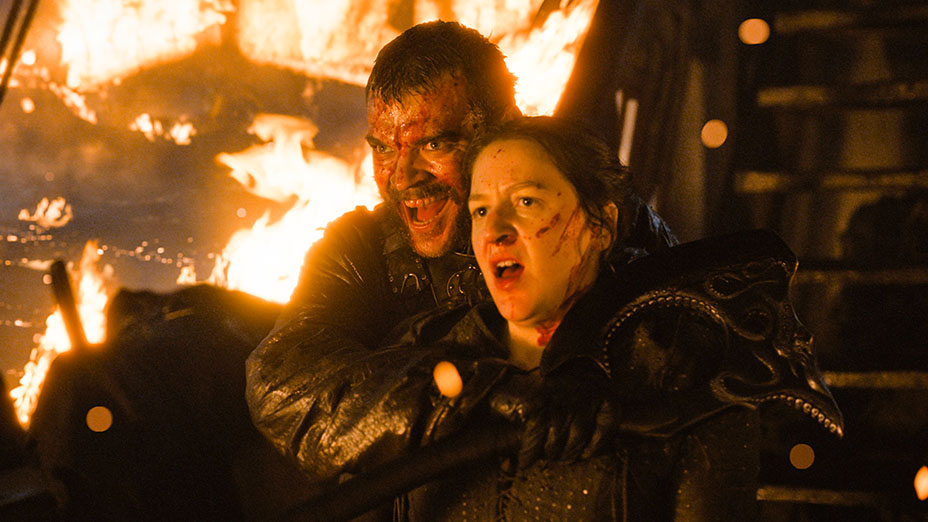 The scene culminates in a hostage standoff between the three Greyjoys, which yields three very distinct responses: Theon’s (Alfie Allen) fearful escape, Yara’s (Gemma Whelan) disappointment and anger, and Euron’s disturbing howls of laughter. What do you remember about being in the thick of that moment?

Oh, man. Watching Gemma and Alfie in that scene … really, the biggest privilege of my job is watching all of these actors in these incredible scenes. Gemma and Alfie were the only actors I really worked with, up until Lena and [Nikolaj Coster-Waldau], of course. And I won’t say other names, because I’m not that much of a rookie and I’m not giving up any spoilers. (Laughs.) But watching Gemma and Alfie in that scene? It was just beautiful. Gemma holds back that anger and frustration in her eyes, and it was so incredible. I love working with those two.

When we were doing the scene, I felt like something was missing. I went up to [director Mark Mylod] and said, “What if I kiss [Yara]? Or what if I licked the blood off of her face?” And he was like, “Ah, Pilou, that’s pushing it.” (Laughs.) But Alfie was jumping overboard, and I needed to do something totally disturbing. So we did a version of the scene where I kissed her, and it didn’t work. We tried a version where I licked her face after he jumps overboard, and I said something stupid, and it didn’t work. So then I went: “This set-up might be the only time in my entire career where I can pull off the most sick laughter in a film I’m ever, ever, ever going to be able to do. It would tell the same story as a kiss or a lick. It would sell the humiliation of her and the humiliation of Theon.” So that’s how I came up with the high-pitched laughter.

'Game of Thrones' Podcast: Is There a Traitor in Daenerys' Army?

Euron proposed to Cersei in the premiere. Let’s assume she accepts the proposal now that he’s delivered on his promise of a “gift.” What does a Euron Greyjoy wedding even look like?

Hmm. (Pauses.) A thousand white doves, horses, candles and a lot of blood. (Laughs.) I have no idea, that’s just me babbling. It would be spectacular. Spectacular. Imagine your worst wedding experience, and then imagine that a thousand times over.

We already have some very bad wedding experiences on Game of Thrones, so you have your work cut out for you.

You know what? I have three big memories of movies I watched. The first is the first time I saw E.T., when he’s almost dying; I remember watching that for the first time. I remember Labyrinth, when the two weird guys take out their eyeballs and throw them up in the air and swallow them and they pop back up into their eyes. That was terrifying shit. I almost pooped my pants. And then I remember when I was in Prague, shooting a Danish show called 1864. I had just become a dad. I was with my wife. We were eating a pizza that we got from a stone-oven pizza place. And then we saw the Red Wedding. That was incredible. That was fucking awesome. Unforgettable.