Continue to The Hollywood Reporter SKIP AD
You will be redirected back to your article in seconds
Skip to main content
August 2, 2017 11:00am
Logo text

It wasn’t as overt as a pair of mountainous hands crushing a skull like a duck egg, but Ellaria Sand’s fate is just as final as what befell her late lover.

Indira Varma, who first appeared on Game of Thrones in season four alongside Pedro Pascal’s Red Viper, has confirmed that viewers have seen the last of Ellaria Sand. The de facto ruler of Dorne was sent off into the great beyond in extraordinarily brutal fashion, bound and gagged in a dank dungeon, helpless, to watch her sole surviving daughter’s slow death and decomposition — a distorted mirror image of how Ellaria killed Cersei Lannister’s (Lena Headey) own daughter back in season five. While Thrones is never shy about depicting violence, the picture Cersei paints of how Tyene Sand (Rosabell Laurenti Sellers) will slowly die is all we’re going to see. It’s vivid enough on its own, unless you, like the late Queen of Thorns (Diana Rigg), have a failure of imagination.

As a means of looking back on her time on the show, Varma answered a few of The Hollywood Reporter‘s questions over email about Ellaria Sand’s demise, the fate of the Sand Snakes, her short but memorable affair with Yara Greyjoy (Gemma Whelan) and more.

This has been a brutal season for Ellaria and the Sand Snakes. What were your initial thoughts when you learned just how bleak the future looked for your character?

My initial thoughts were of course disappointment. Not that Ellaria was going die, but that I had no dialogue, and was gagged! And didn’t die on screen. However, I couldn’t second guess where the scene was going and also appreciated just how cleverly written and what a beautiful scene of revenge [showrunners Dan Weiss and David Benioff] had written.

The Dornish storyline has been drenched in blood from the start. Did you always feel like it would culminate in an incredibly violent direction?

The Dornish people have little loyalty toward their own, but then who does in this Game of Thrones world? Violence seems to permeate the whole series, so I did expect something original!

What do you remember about shooting the scene where Ellaria and Tyene are marched through the streets of King’s Landing?

We were shooting in a beautiful medieval town in Spain, so I was admiring the architecture… until I got hit by a globule of nauseating grunge courtesy of the art department. It was quite fun when it didn’t hurt.

How many spit takes did you do in your first scene of the episode with Cersei? And how does one master the art of the vengeful spit take?

I spat as many times as there were takes. I don’t tend to spit at people in life, so it’s quite fun being unladylike on occasion. 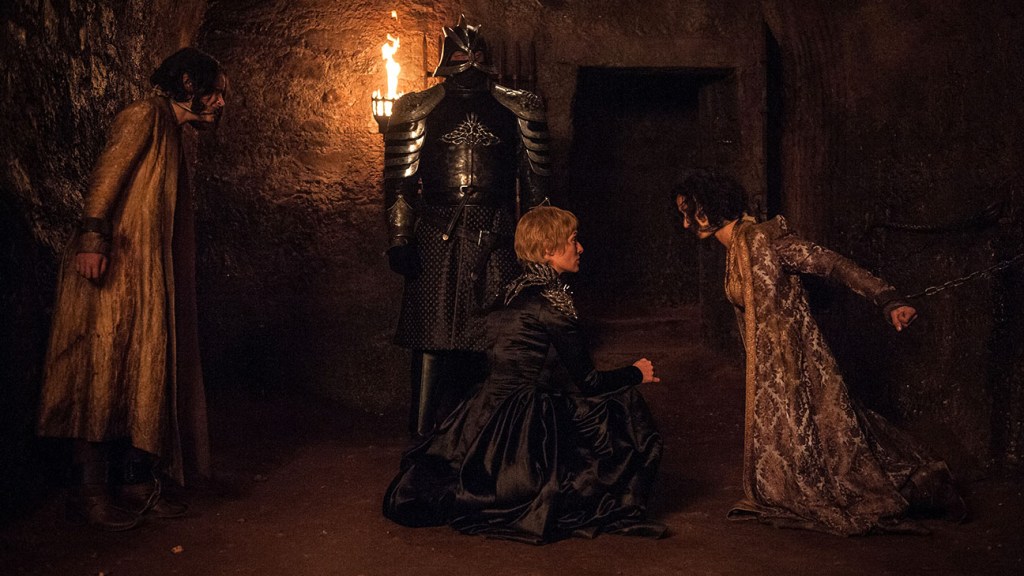 The scene between Cersei and Ellaria in the dungeon was incredibly powerful, all the more so because you’re restricted in your dialogue, or lack thereof. How challenging was this scene to shoot with the gag, both physically and emotionally?

The challenge for me in the Red Keep wasn’t finding the emotion, but keeping it there all day ready to use when they said action. It is quite tiring being on a simmer all day and then lifting the lid occasionally to let off some emotion. The shackles were a pain, as I wanted to have something to pull against, but they kept coming undone. So they were tightened and then we couldn’t get them off at all and I had to eat lunch in them and be sawn out of them at the end of the day.

What do you remember about working with Lena on that day?

I love Lena, but we were both very focused as we had a lot to do. We just had a giggle and gossip waiting between setups.

What was your reaction when you learned about Cersei’s plan for Ellaria to watch her daughter’s slow death and disintegration? Have we ever seen something so cruel on Game of Thrones before?

I thought it was a brilliantly cruel end for Ellaria. From one mother to another. They are more similar than they pretend.

Cersei says Ellaria will be left to contemplate all of her life choices that led to this horrible fate. Do you see Ellaria as the type to break under such weight and regret her choices, or is she someone whose thirst for vengeance and justice would only intensify after suffering such cruelty?

I think she would go insane watching her child dying in front of her and unable to do anything. Then she might have moments of lucidity where she would naively hope for rescue which would send her mad again. I don’t know who wouldn’t break under that horror. But it’s way too late for regret. She would comfort herself knowing that at least Cersei knew her pain.

Returning to the previous episode, what are your thoughts on how the show handled the deaths of Obara and Nymeria in battle against Euron Greyjoy? Was it difficult to lose Keisha and Jessica from the cast in such violent fashion?

I was sad not to be there to give them a good send-off.  And also that my girls weren’t good enough fighters, so they couldn’t defend themselves for longer. Me too. Wish I’d had a spear or something to impale a few people!

Gemma Whelan has talked about how you and she improvised Yara and Ellaria’s kiss. Is that how you remember it?

It was clear in the script that something was going on between them. They are both up for a good time, those girls. So a kiss is the polite way in, no? I think Ellaria would have liked everyone to join in. Also, the audience thinks the scene is going in one way and then the rug is pulled. Clever structuring!

Have we seen the last of Ellaria Sand?

I kid myself that Ellaria will be saved. “She’s still alive, isn’t she?” Someone’s got to miss her. But who?