“You’re the one they call the Dog.”

It’s among the few sincere belly laughs produced during the course of “Beyond the Wall,” the penultimate episode of season seven of Game of Thrones, as Tormund Giantsbane (Kristofer Hivju) and the Hound (Rory McCann) meet for the first time. The motor-mouthed wildling and the fire-fearing soldier have little in common, aside from their proficiency in combat and their shared connection to Brienne of Tarth (Gwendoline Christie) — but the bond is just sturdy enough that the Hound risks life and limb to save Tormund from certain doom.

Really, even though we lost Thoros of Myr (Paul Kaye), and even though we lost a dragon, “Beyond the Wall” was rather lenient in allowing the other members of the Eastwatch elite to survive the big battle with their lives intact, red shirts aside. But there was a moment where it looked like we were about to add one more main character to the body pile: Tormund, mobbed by wights at one point, on the cusp of being dragged into a frozen watery grave. The fear on his face is unlike anything we’ve ever seen from the character before, matched in its power only by the sheer relief when the Hound steps in and rescues Tormund from the clutches of the dead.

For more on how the sequence played out, The Hollywood Reporter spoke with Hivju, who gave his thoughts on how “Beyond the Wall” compared to his other Game of Thrones combat experiences, how he views the camaraderie between Tormund and the Hound, the giant-killer’s views toward Brienne and more.

How worried were you for Tormund, when you started reading the script for this episode?

I was like, “This is it.” I was sure that this was my time to go. But then when the Hound pulled him out? I was like, “Hallelujah!” And it’s all because they both know Brienne! (Laughs.) If it hadn’t been for that conversation, he would have never saved me!

Can you describe how the scene in which the wights start attacking Tormund, and start dragging him into the lake, was written?

It was many pages of wights getting chopped. The whole sequence. But the scene turned out more intense than how I read it. The way the whole sequence was written was that horrible things were happening and they keep getting caught up. It was a page-turner!

There are so many components to the moment, with Tormund getting hit on the head and then being dragged into the lake — what are your memories of filming the near-death?

This is the thing: You can’t fake chaos. You can fake a lot of things when you make movies, but you can’t fake chaos. It was the same thing with “The Battle of the Bastards,” when you had to go into the mud and you were surrounded by stuntmen, and people are running over you. It was the same thing here. We had hundreds of stuntmen, and so many extras, and people kept running, and I just screamed for mama. It was a horrible sequence. My voice went on the first take. One bite, and you’re gone. It was very chaotic and very intense. We wanted to give the audience the feeling that it was Tormund’s turn to go.

It’s very effective. I definitely thought that was it, and I was screaming, “No!”

How 'Game of Thrones' Delivered the Season's Mother of Dragon Moments

You sold the fear. It’s very jarring to see Tormund so afraid. This is not a man you think of as ever feeling fear, even in the face of death. What was it like tapping into that aspect of the character? It must have been unfamiliar territory for you.

The interesting thing is that every season, I find pieces of Tormund that I didn’t know he had. For example, in the end of “Hardhome,” when Tormund sees all of these people becoming wights, and he almost cries … I didn’t see that coming. Definitely how we chose to do that scene, it’s the fear of death, which is one thing. But when you’ve seen what will happen to you if you die here? That’s the worst scenario Tormund can think of. So it’s not just a fear of death. It’s a fear of becoming one of them. I just thought that it can’t get worse than this. (Laughs.) Worse than this? It can’t get.

You have been at the heart of some incredible action scenes on Game of Thrones, from the Battle at Castle Black to Hardhome to the Battle of the Bastards and now this. How did this week’s battle compare to the other ones?

The funny thing about making those episodes, and it’s pretty unique to Game of Thrones, is it’s like shooting a full feature-length movie. It seems like that. We shoot these sequences for so long. I must say, it was a long run. We had the lake, we had everything, all of the fantastic extras who did such an amazing job and the incredible stuntmen. We shot most of that scene chronologically, so we could follow every step of it. It was a lot of wight-chopping. When you have so many kills in a sequence, we couldn’t plan all of the kills. So what [stunt coordinator Rowley Irlam] did is he created an alphabet for each one of us. We had an alphabet of kills. The stuntmen read our language of fighting, so they could die in the right way. It wasn’t like, “You take him here, and you take him there.” It was like, they sent people on us and they just kept coming, and we just had to follow the alphabet and keep a clear head. It felt like real fighting. It felt like we were fighting for our lives. That made the whole sequence very fun and very intense and very intuitive. 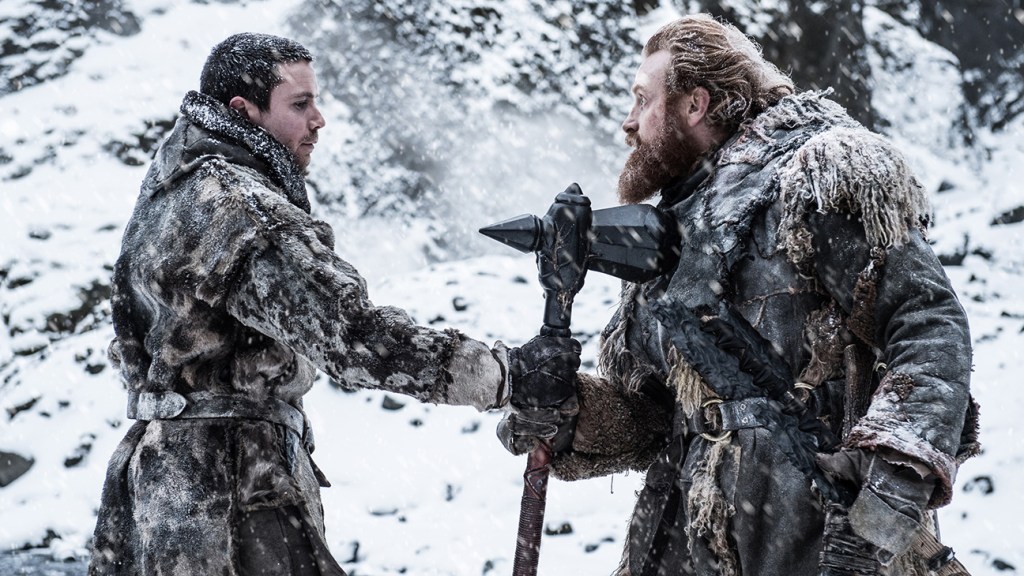 Do you have a favorite kill from this one?

There’s a smash with the ax … I had that new weapon this year, that was very fun. I have an ax over my head, and I just kept smashing it down. I liked a lot of them. If you count all of the takes and all of the kills, I feel like I have at least a thousand kills from the two months we shot. I read somewhere that there’s a kill score, and I hope my kill score is going up. I was second or third place. After “Battle of the Bastards,” Jon Snow [Kit Harington] is high up there as well, so it’s a close competition.

You mentioned it earlier, but the pairing of Tormund and the Hound was very fun to see. Or Tormund and “the Dog,” I should say, which I hope you came up with.

No, it was beautifully written. We didn’t change a comma. It was all there. It was a relationship and a meeting of characters that I didn’t expect. It’s a funny thing. They’re both warriors. They’ve both been through a winter storm or two. The Hound is such a deadpan, non-talking kind of guy, and Tormund, he lets out pressure by talking. And he’s back home. He finds out that the Hound knows the love of his life. It’s so many great things for Tormund. He’s just curious about the guy. He doesn’t say anything. He becomes a bit childish. That was all there, and a new side of Tormund that I loved. Those two guys could become good friends.

Tormund and the Hound connect over Brienne. At this point, do you really think Tormund is legitimately in love with Brienne of Tarth?

A hundred percent, yes. Tormund has found his love. In his mind, in his dreams, they are already married. There’s the scene between Brienne and Tormund in the first episode of season seven, which was cut. I hope it will show up somewhere, on some deleted scenes or something.

What did we miss?

Well, the director, Jeremy [Podeswa], has already spoken about it, so you can find what he’s said. But it was a scene where [Tormund] was talking about someone who was dear to him, and when [Brienne] understands he’s talking about Sheila, the bear he has fucked … she didn’t like the pick-up line. (Laughs.)

How did being back beyond the Wall fuel your performance as Tormund?

A lot of this, we shot it in Iceland. I think Tormund was very happy to be back home. His costume is designed so he can be one with the landscape. I really enjoyed that. I enjoyed being back, and so did Tormund. It was beautiful. What we shot in Iceland, the scenery … we had such a great time filming there. I’m so glad they went for the real thing.

Do you feel like Tormund is somewhat safe now? If the writers wanted to kill him off, how could they ever top the opportunity they had here?

Who knows?! It’s one more episode [this season], bro. Nobody knows. A lot of things could happen. I really don’t know. I don’t think anybody is safe, especially with the threat that’s upon them. No, I don’t feel safe at all.

He’s going to be fine. Who else is supposed to rule over Westeros when this whole thing ends?

That’s right. (Big laugh.) He has to sit on the Iron Throne.

'Game of Thrones' Podcast: A Closer Look at a New Jon Snow Mystery

'Game of Thrones' Podcast: A Closer Look at a New Jon Snow Mystery

'Game of Thrones' Season 7 Finale: What to Expect Based on the Episode Title