In his moment of redemption, his chance to return the favor, Theon Greyjoy (Alfie Allen) just stood there, visibly pounded by echoes from a past he wishes he could erase — and an instant later, he was a man overboard, jumping ship away from the newest in a long series of nightmares.

While he’s not always the easiest character to root for on Game of Thrones, nor is he the greatest or bravest fighter on the battlefield, there’s no doubt that Theon is among the show’s most tragic and traumatized individuals. It’s hard to forgive his initial betrayal of the Starks, just as it’s hard to ignore how arrogant he was in those first two seasons. But unless your heart is made of stone (with apologies to all you Catelyn Stark fans out there), you can’t look on Theon without a great deal of empathy, given what he’s suffered through.

There are the physical injuries, of course, a list that goes on and on, covering scars and wounds better left unmentioned. But the mental and emotional trauma is where the real hurt lies with Theon, dating back even further than the series premiere. Theon was raised in Winterfell, yes, but as a hostage taken by Eddard Stark (Sean Bean) after a brief rebellion from the Iron Islands. He was a well-treated hostage, yes, thanks to the companionship of his brother Robb (Richard Madden), but a hostage all the same. When we first met him, Theon was more Northerner than Iron Islander, but not even fully at home within the realm of winter. Even entering Thrones, Theon was damaged at best, from a deeply rooted place.

The trauma only piled on from there, what with his days spent as Reek (it rhymes with “weak”), the alias he was forced to live under during his time serving as Ramsay Bolton’s (Iwan Rheon) human toy. Theon spent three full seasons under Ramsay’s control, more or less a lifetime in terms of Game of Thrones and certainly within the context of his living conditions. It’s a minor miracle that Theon didn’t completely sell out his sister Yara (Gemma Whelan) when she came to rescue him, rather than simply reject her offer for salvation. It’s a major miracle that Theon broke away from Ramsay at all, rescuing Sansa (Sophie Turner) from Winterfell at the end of season five.

Since then, it has seemed like Theon was on an upward trajectory toward redemption. He returned to the Iron Islands, reconciled with his sister, became her lieutenant, joined forces with Daenerys (Emilia Clarke) and her bid to win over the Seven Kingdoms … and then, in one violent instant, it all washed away, as Euron Greyjoy (Pilou Asbaek) and his navy decimated Yara’s fleet, forcing the violent ghosts from Theon’s past to come back to the surface. It’s easy to mock the man for jumping overboard. It’s much harder, and much more rewarding, to open your heart to Theon’s past experience, and why those horrible memories would override any instinct for bravery in such a harrowing moment.

'Game of Thrones': Gemma Whelan Weighs In on Yara's Future and the Elemental Sea Battle

For her part, Gemma Whelan believes that Yara empathized with her brother in that scene, previously telling THR: “I think she probably understands he has no choice. But I also think she’s very upset that he’s having flashbacks, and she understands there’s a lot going on for him. I don’t think she feels like he’s abandoning her. I think she feels like he’s having a terribly traumatic time, there’s nothing he can do, and maybe — just maybe — he’s jumping ship now so he can come back and do some good.”

It turns out, that’s exactly what Theon has in mind — or, at least, it’s what he has in mind now. In “The Spoils of War,” Theon returns to Dragonstone, and makes it clear that he wants Daenerys‘ help to rescue Yara. Unfortunately, the Dragon Queen isn’t on hand when Theon returns (she’s otherwise occupied), but his stated intention is there on the screen. Whether he can follow through with a direct rescue attempt on his sister, or if it’s a wise idea for him to be physically involved in such a campaign? Those are questions for another time. For now, it’s enough to know where his heart lies. 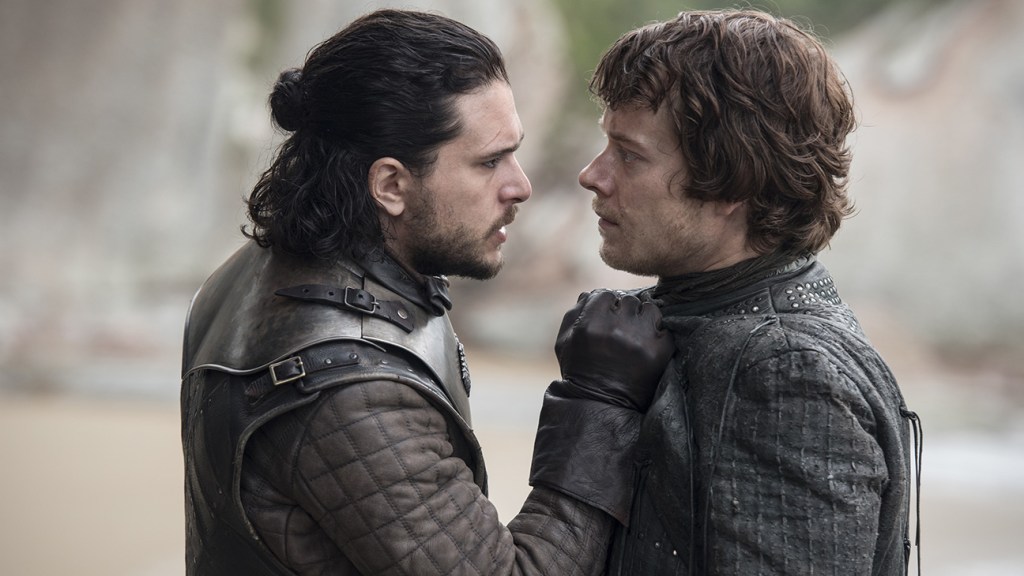 But where does his future lie? With only nine episodes remaining on Game of Thrones, and so much pressure on the situation up North and the battle between the two queens, is there even enough story real estate for a Yara Greyjoy rescue operation? If it’s part of a grander scene in which Daenerys and her army invade King’s Landing, then yes, there’s room. If Dany’s destiny pulls her north toward the Wall, however, it’s harder to see.

Indeed, in the books, it feels as though Theon’s own destiny lies up north. As of the end of the most recently published novel, “A Dance with Dragons,” Theon remains very much up in the thick of the North, reunited with his sister. In a sample chapter released from “The Winds of Winter,” the sixth and as yet unpublished book in George R.R. Martin’s series, Theon is still up north, serving as a prisoner of Stannis Baratheon (Stephen Dillane), long since deceased on the show. Somehow, some way, it feels like that Theon’s story is pointing him toward that same point in the books — and could very possibly end up in that frozen region, as well.

In “The Spoils of War,” when they reunite for the first time since season one and for the first time since Theon betrayed House Stark, Jon Snow (Kit Harington) grabs his former fellow bastard of sorts and barks in his face: “What you did for [Sansa] is the only reason I’m not killing you.” The words are harsh, if not entirely unjustified. If there’s ever any chance at reparation between these two, then it’s likely through Theon joining his cause with the Northern campaign against the White Walkers. There are few practical ways for Theon to beat back the ghosts of the past than by challenging the veritable ghosts of the future. Before all is said and done with the character, it’s not unreasonable to expect he’ll come face to face with the Night King’s army — we’ll just have to see whether he jumps the proverbial ship in such a moment.

What do you think is next for Theon Greyjoy? Let us know in the comments section, and keep following THR.com/GameOfThrones for interviews, news, theories and more.