Continue to The Hollywood Reporter SKIP AD
You will be redirected back to your article in seconds
Skip to main content
May 6, 2019 8:15am

Sally Wainwright (Happy Valley) has a career filled with strong, complex women, but there’s one who she hasn’t been able to stop thinking about since she first picked up Jill Liddington’s 1998 book Female Fortune.

“That was the first time I got a really huge, big hit of who Anne Lister was,” Wainwright tells The Hollywood Reporter of the inspiration for what would become HBO’s Gentleman Jack. The writer couldn’t believe that Halifax, the English city where she’d grown up, and the stately home Shibden Hall that she’d visited many times as a child had housed a famed lesbian diarist and landowner.

That was her first encounter with Lister, who has been brought to life by Suranne Jones (Doctor Foster) in Wainwright’s HBO/BBC co-production Gentleman Jack. The period miniseries focuses on the life of Lister, a unique historical figure who kept extensive diaries and lived an openly lesbian lifestyle in the days before the terminology for women who loved other women had even been coined.

Wainwright talks with THR about why the time was right to bring the queer icon to the screen and her 20-year journey to make it happen.

You’ve been trying to make Gentleman Jack for almost two decades now. What was it about Anne Lister that drew you to her story?

Growing up in Halifax, England, I’d visited Shibden Hall often, and it was a very special place to me, but I had no idea there was this fantastic woman who owned it. It was only during the 1990s that I started to get a sense of who she was, that there was actually something quite intriguing, a bit secretive and transgressive about her. So I tried to find things out about her and it was difficult because no one really talked about her.

When Jill’s book came out, I couldn’t believe that I just didn’t know that this woman owned this house that I was so fond of. It honestly changed my life, because I grew up in Halifax, just waiting to leave, wanting to go and live in London. But it totally changed my attitude to my hometown. Suddenly, Halifax — that I’d thought was the back of beyond — was this magical place that I just couldn’t wait to get back to.

You pitched a series about Anne in the early 2000s but it didn’t end up happening. What do you think has changed from then to now?

There are two significant factors. I think that my star has risen quite a lot since when I pitched it in 2002. I’d had At Home with the Braithwaites, which had been a successful show, but I think I had still had a long way to go until people noticed me and thought that I was the real deal. I also think that the climate has changed. In 2002, we weren’t having the big, open, articulate discourse that we now do about gender and sexuality. It really heartens me when I see my children and their friends just being really open and kind and clear about homosexuality and their gay friends. There’s no trying to make people feel small or sidelined anymore; it’s a very different environment.

I think Anne Lister’s time has come. From being someone that Shibden hid away, didn’t talk about, and wasn’t proud of, they’re now very proud of her and rightfully so! I do think that if I had managed to get a project about Anne greenlit in 2002, it would have been very niche, on BBC Two, and hidden in the schedule, so the fact that it’s now a massive primetime drama on BBC and HBO, that just wouldn’t have happened.

Period drama has a tendency to be homogeneous when it comes to representation, and Gentleman Jack bucks that trend by focusing on Anne and her sexuality. How did you feel about challenging that status quo coming into the series?

I think that period drama in [the U.K.] has become rather stale. We tend to use a certain kind of language and visual language and I find it quite tired, and I don’t believe it. I don’t believe how people speak, and I wanted to find a language — a lot of the language comes from the diaries, obviously — I wanted a freshness and freedom that could make viewers believe that they were alive, and that they had lived. Anne Lister is such an unusual character, so to place her in a period drama kind of blows a lot of things out of the water about what we think of history.

You’ve had a career filled with strong female characters that you’ve created, but how does that process change when you’re crafting a story based on a real life? Especially with someone like Anne, who had such a unique lived experience.

The process didn’t really change at all, actually. That’s exactly what attracted me to her, her character, how powerful she was, how complex she was, how strong she was. She’s a mass of contradictions, Anne Lister. She’s pragmatic, but at the same time she’s a chameleon. She was a woman of all things, and she could talk to anyone on their own level, which is a measure of her intelligence.

Because the primary source is the diary and not, say, a character in a novel, it’s not a narrative, it’s day-by-day accounts written slowly over the course of years. When people write in that level of detail it can be contradictory. So it’s actually been really hard to make those commitments on how to dramatize this woman. How do we show what her character is? But that complexity is what attracted me to her. She was a real polymath. She had this passionate curiosity about the world and everything in it. She was a great linguist, a great traveler, a great scholar, she was a great lover. She was a fantastic lover of women, and when she set her sights on someone they were usually interested. 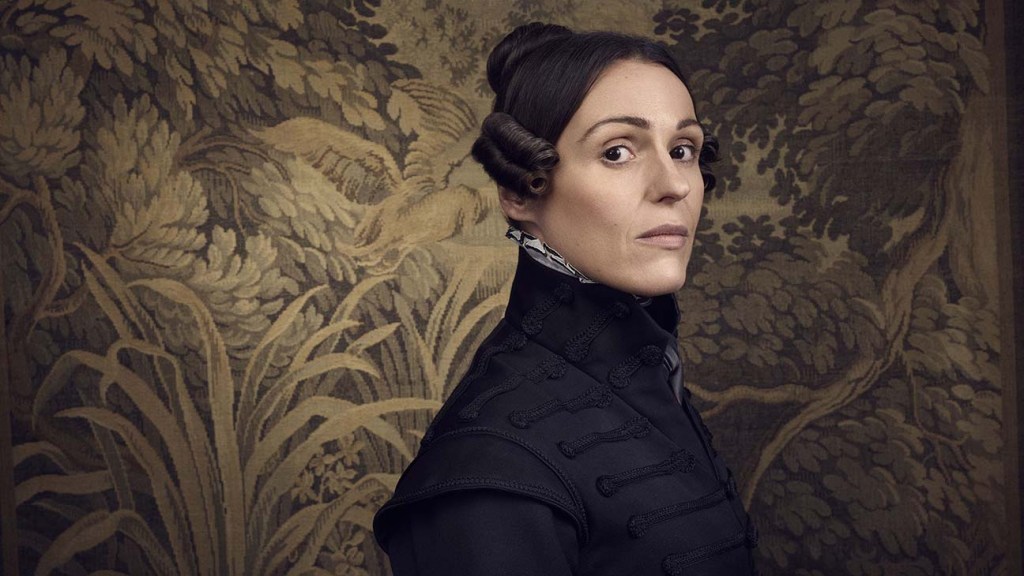 Something that’s immediately striking in the show is how self-assured Anne is in herself and her sexuality. It feels rare that we see queerness that isn’t centered around trauma or tragedy. How important was that to telling her story?

This is one of the reasons why I wanted to pick up on it [with Anne as] a 40-year-old because I feel like we’ve seen it before — the trauma of being gay and coming out — and I don’t want to denigrate that as a story, but it’s a story I feel I’ve seen on telly already. And what I always find really uplifting about Anne Lister is at the age of 40, she knew who she was.

Reading between the lines of the journal, I believe she had very robust mental health. And I think she had an enviably healthy opinion of herself, and though that’s often an insult, I don’t mean it as an insult. I wish I had a healthier opinion of myself, I’m sure I’d be a lot happier. She believed her sexuality was God-given, she believed it would be against God if she slept with a man because God made her like this. And she seemed able to live with that in a very healthy way.

I find that really uplifting that for someone 200 years ago to have the courage and intelligence to be able to navigate her way through society, not to be ostracized from society, and to be truthful to who she was is why we should celebrate her. That’s why the story is unique, because it’s about this unique human being who was capable of being like this. I think that’s a beautiful message for anyone, no matter what gender or sexuality they are.

In 2019, Anne’s proclivity to dress in masculine clothing and be called “Fred” by her lovers seem that she could’ve been exploring her gender as well as her sexuality. Was that something that came up during your research?

Me and Suranne just talked for hours and hours about things like that. Anne Lister did behave like a man, and she did identify herself with the way that men behaved. You could argue this either way, but I do think that she liked being a woman on a practical level and that she liked being a woman on a deep psychological level as well. On a practical level, it gave her more access to women. If she’d been a man, she wouldn’t have been allowed to be alone with them. In that day and age, women often slept in bed with each other; it was completely normal.

There were a few references in the diary about her fantasizing about having a penis, so you could definitely argue that she did want to be a man, but there aren’t that many. I don’t think it was a preoccupation of hers, but she did often describe herself as being softly gentleman-like. I think she liked being a gay woman, being a woman who had sex with women, and she was fascinated by herself. She went to Paris to speak to Georges Cuvier, who was — this was before Darwin — the foremost thinker on this kind of stuff. This was a scene I wrote but we had to cut it out, and I’m hoping if we get a second season we can revisit it. But she went to Cuvier and said, “I don’t know if I’m a man or a woman,” and she wanted to study to find out more about herself. She was curious and wanted those answers.

As an English showrunner working on a co-production with an American company, have you been affected by or do you have any thoughts about the current WGA action?

I’ve not been impacted as I’ve never worked in America, so I’m not part of the WGA, but my agent was telling me about it as she knew I was coming out to New York. I’m really pleased it’s happening and that the writers have done what they’ve done. I was really shocked when I first came to America at how different the system was to England. It’s like agents don’t seem to be acting on your behalf or your best interest, which I always assume is what an agent does. That’s what agents do in England, and though I don’t have all the details, I really was quite shocked when I found out about some of their interest being about pairing talent and not representing what’s best for the writer or the show.