[Warning: This story contains spoilers from the first season of Girlboss.]

Girlboss, Netflix’s new comedy, is no fairytale — and its road to the screen wasn’t either.

Inspired by the New York Times best-selling book of the same name by Sophia Amoruso, Kay Cannon’s (Pitch Perfect) adaption follows the ambitious and brash 23-year-old Sophia (Britt Robertson, Tomorrowland) and her rise to build an online fashion empire known as Nasty Gal. The comedy, which counts Charlize Theron among its executive producers, explores Sophia’s ups and downs — from dumpster diving to running her own online fashion retailer.

Cannon tells The Hollywood Reporter that initial feedback to the pitch for the show was less than perfect, as one early potential buyer insisted that the show be made more for men, a surprise given Cannon’s work on Pitch Perfect, 30 Rock and New Girl. After passes from multiple networks, including Fox, Girlboss finally made its way to Netflix, giving Cannon her first gig as a showrunner.

Below, Cannon talks with THR about early reviews, notes from Theron and creating a character that’s not always likeable.

What was it about the themes of Sophia Amoruso’s book that appealed to you?

We’re not telling a fairytale, which is exciting. She did an extraordinary thing at such a young age. The girl in Girlboss to me has always meant youth, not gender. She had a voice and the fact that she used it, that’s what attracted me to her. [The real] Sophia has gotten a lot of harsh criticism lately because Nasty Gal went bankrupt and people say, “Look at you. You tried to do something. Haha, you didn’t get to do something!” which is incredibly unfair. What happens to a lot of young women is they become paralyzed with fear to even attempt to try and do something. They’re so worried about being liked and being polite and not finding their inner voice and using it. She represents what young people feel. This idea of when we’re lost and we don’t know what our deal is in life that manifests itself in many different ways. For her and a lot of people, it was anger, sadness and depression. We have a lot of depressed people in the world because they don’t know what their purpose is in life.

What was your reaction to Nasty Gal going bankrupt? Is that something that could be explored in subsequent seasons?

We had already finished filming and Sophia called me the day after Donald Trump was elected president and said that Nasty Gal was filing for bankruptcy. In this idea that we’re not telling a fairytale, I thought that was an amazing story. Here’s this guy who filed for bankruptcy several times and has failed upward and we have a female-driven business that hired hundreds of women and Sophia was this mentor to women to take risks who is being criticized. We have a president where now our female reproductive rights are in question, and we’ve taken a million steps backward and this company is filing for bankruptcy. That’s a wonderful story to tell. I hope Netflix lets us tell it and we get enough seasons to do that.

Theron has mentioned that as Girlboss was being developed and pitched to the town that the early feedback was that it needed to be less female-focused. How common was this feedback as you took Girlboss out to the market?

I was on an overall deal with 20th [Century Fox Television] so we pitched it to the studio because they’re my bosses. They’re primarily doing network shows and that just has a different business model. When I pitched it, they said, “You can’t call it Girlboss. Make it more for men.” I’m a people pleaser so in my head [I said], “How can we do this?” And Charlize was like, “No! We’re not doing that.” (Laughs.) Their pitch was, “Bring in a guy who teaches her to be the boss.” That’s when I did not want to do that because then it becomes about gender politics and that’s not what this show is. It would feel like every other show out there that’s in the workplace. It’s very condescending and bullshit.

Where did you go after that?

We went to all the networks. We knew we wanted to be at Netflix. In a way, maybe I did some self-sabotage because I pitched more of what we might see in season two where we would see her with four or five employees in a workspace where we see Sophia not being a great boss to her friends and the obstacles of being a boss to her friends. That’s what I had pitched to the networks and they were like, “No!” Netflix wanted something for young women because they wanted something for everyone in a household to want to watch. Whereas networks cater to a specific demographic.

This is your first TV series as a showrunner. What made Girlboss appealing for TV versus film given your recent success in film with the Pitch Perfect franchise?

Being at Netflix, I felt like I could do a cinematic show that felt like you were watching a movie, but it’d be a television show. It’s a hybrid in my mind. The show looks beautiful and we try to do some really cool things that I don’t think we would be able to do elsewhere. There’s a lot of story to tell and I’d rather it be told in seasons [rather] than just one movie.

What lessons did you bring from your experiences as a writer on 30 Rock and New Girl?

You’ve written for a lot of female voices throughout your career, especially with Pitch Perfect. What makes Sophia different?

She is very real. In that way, it feels different. She’s not so jokey. In some episodes, she goes from being fun and playful to lashing out at someone to then crying. What I had to put to the side is this concern about her being likeable. She wouldn’t feel real if I was concerned about making sure people were head-over-heels in love with her. The whole point of her is to give young women the permission to be real and not say, “I’m this good little girl that listens to whatever a guy tells me to do.” It was about trying to unravel this idea of what a woman should be. The show is called Girlboss, but she’s not a girl, she’s a woman. Hillary Clinton had this issue of, “Stop shouting. Smile more.” People try to make women a very specific thing so that we like them. My hope is that people don’t watch the beginning and tune away because they think she’ll never grow and they can’t stand her. I hope this is a different story and character for people to watch and root for. I’m not saying our show is Mad Men, but when you watch the first episode and you see Don Draper at the end and are like, “He cheats on his wife!” But you still love him and you root for him. He’s appalling in a lot of ways. Society is like, “Yeah! I love Don Draper.” And I just think people are harder on ladies than we are on guys. 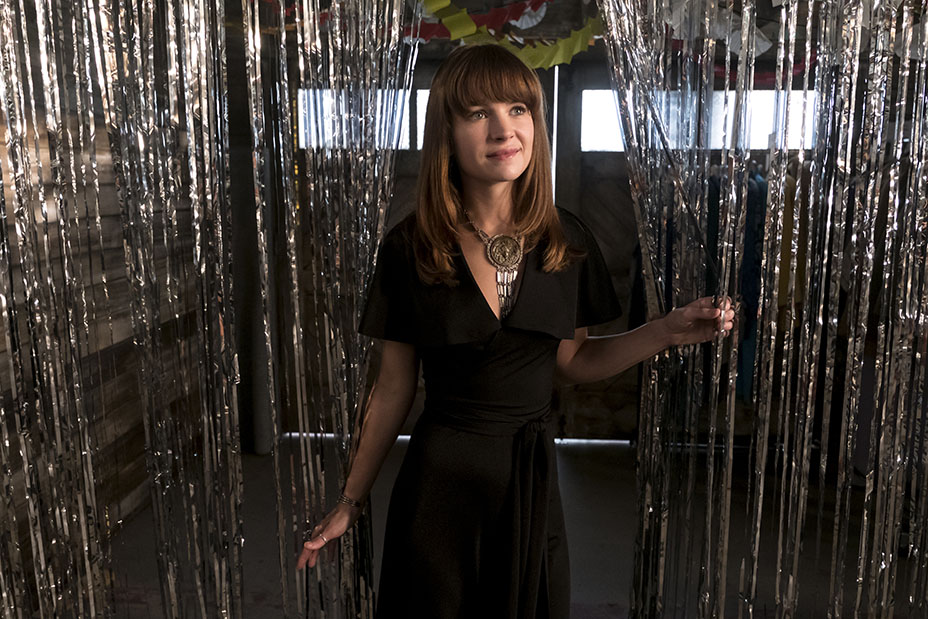 There’s a storyline in which Sophia is obsessed with preventing the company from getting a bad review. How do reviews impact you?

I don’t obsess over the reviews, but I have an opinion on them. We’ve gotten mixed reviews and I think when we’ve gotten a really bad review they’ve only seen the first couple of episodes. And Sophia is not the most pleasant in those. Where I get a little bummed is I want to be like, “Give it another shot. Keep watching.” I read one review that said there’s no growth in her at all. Clearly they had only watched the first two [episodes]. Anytime you’re doing the set up of somebody it takes a little bit to get going. I felt like we did find our footing and just like the character of Sophia, we as a show grew and figured out what it exactly was that we were trying to say. I hope people know we’re just trying to tell a real, true story about someone in a fun way. For anybody who watches the show I hope what they get out of it is that it gives them permission to be who they are. I do think we’re living in a time where everybody is feeling like we’re being controlled by outside forces and they don’t get to be themselves. This is a character who embraced who she was, warts and all, and still is going out there and taking a risk. Specifically for young women who feel paralyzed with fear to dare to try to do something because of failure I hope they go, “I’m going to try. I’m going to try and do it.”

How involved was Sophia in retelling some of what actually happened to her? Which true events did you find the most amusing and how much did you have to embellish on some of these events?

Everyone around her, all of her friends that’s all fabricated. The big business things that happened to her, those are all true. Like when she launched her own site she sold out in the first day. There’s a lot more true stuff in the first couple of episodes. If you think about what happened to her, she sat behind a computer and had this online business and that’s so boring to watch. I had to dramatize a lot of things. She called her company Nasty Gal based on a Betty Davis album, but she just looked at that album when she named it that. I didn’t think that was interesting so we fabricated a more interesting way of having her hear the song.

Did Sophia have objections to fabricating her story?

Not at all. She was so great in being hands-off and trusted me and the writers. Sometimes I think that the real Sophia likes the fake Sophia more than herself. (Laughs.)

How involved was Theron in the series? Was she on set? Did she have notes on the script?

She was there the first week of production. She’d be on set in Africa and would watch the dailies and give notes. She was always checking in. She was really instrumental in being a mentor to Britt.

What would a season two look like and where would we see Sophia?

We would see more of her rise. It’s unclear if she’d move to L.A. or not, but we’d see some of the bumps of actually being a boss to people. What we’ll do in the show is this idea of understanding what your strengths and weaknesses are. A big weakness of Sophia’s is that she has no business managing people, especially when they’re her friends and how these friends could possibly take advantage of having their very young boss be their friend at the same time. We’ll explore all of that.

What do you think about Girlboss? Sound off in the comments section, below. Girlboss is now streaming on Netflix.