Yassir Lester is going back in time … in a duffel bag.

The writer/comedian/actor, who has been working behind the scenes for shows like Girls and The Carmichael Show, is about to approach TV’s tough issues a bit differently on Fox’s Making History, stepping into the shoes of Chris, a professor who reluctantly travels to colonial Boston with Dan (Adam Pally), an underachieving man who has stumbled upon the discovery of time travel (in a duffel bag).

After Dan discovers that his time-travel jaunts to see his girlfriend (Leighton Meester), who just so happens to be Paul Revere’s daughter, may have had some effect on the America he knows today, he enlists Chris to go back in time with him and fix things.

Lester, who is also a stand-up comedian whose jokes include everything from politics and insecurity to Twitter and Trump, says he may be even more excited about time travel than his Making History character. “If a random guy on the street right now walked up to me and was like, ‘I have a time machine,’ I’d be like ‘OK let’s go.’ No questions asked,” he tells THR.

As a writer, his credits range from the Bill Cosby episode of The Carmichael Show to the big wedding moment on Girls, and as a time traveler he will be addressing similar issues, he says, like gun control, racial equality and women’s rights, through a historical lens. “We take the funny way to it,” says Lester, “but we’re not going to dodge those issues because all we are is our history.”

And he’s well aware that time travel is a hot topic right now, with shows like NBC’s Timeless and ABC’s upcoming Time After Time attacking the dramatic and dangerous aspects, but Lester likes the idea of a more lighthearted take, with a few friends traveling back in time to have a beer with Sam Adams (which they do in the first episode). Or how Lester puts it: “What happens when it’s not serious people going back every week to stop a bomb. What happens when three friends want to go back to the ‘60s and just want to eat a lunch.”

Lester spoke with THR about his ridiculous audition tape to get on the show, his love of science fiction and juggling everything in his career at once (“I want to experiment with the idea of what happens when someone doesn’t sleep for six months, so now is the time to find out”).

Why Time Travel Is Suddenly All the Rage on TV (Again)

How did you get involved with this show, in front of the camera this time around?
I was writing on Girls and The Carmichael Show, and I wasn’t ever someone who’s pursued acting. But I was friends with Adam Pally and when he signed on he sent me a text really late like, “Hey I’m doing this show, I think it would be cool for you and I don’t want to work with someone I hate, so you should audition.” But I wasn’t an actor, I’m tired, I’m working on two shows, so thank you but I’m going to have to politely decline and he’s like, “dude don’t do that, just send in a tape.”

So I made this insane audition tape. Like crazy credits, talking through the fourth wall to the producers, my name keeps showing up randomly and there was animation, but I was crying so hard laughing because I was just delirious and I finished at like 2 a.m., thinking they’re going to hate this but at least I’m laughing. So I sent it off at like 2:30 a.m. and then by 10 a.m. the next day, I got a call and they said they need you to come in and audition for real. It seemed so crazy.

You want a funnier version? Here’s another version of it. I’ve always been a master of my craft and I’ve basically just been waiting for the masses to recognize me as a true actor so when this role come along I figured, “hey, this one is all you.”

Can you tell me a little bit about your Making History character? How do you relate to him?
So Pally’s character is a facilities manager, a fancy way of saying janitor, and I am a history professor at the college, a young kind of smart guy whose entire existence at this point in the show is to try and get tenure, so when Dan [Adam Pally] goes back into the past to see his girlfriend, hilarity and hijinks ensue. Because I’m a history professor he figures I’m the one person who can help him, which I don’t know why, but I guess I’d be the one who’d be like, “oh yeah sure, I’ll go.”

Also I feel like we’re both very driven – we’re also both skinny and light-skinned and wear glasses. We look almost identical, body type almost exactly the same … We both eat a lot of pears. 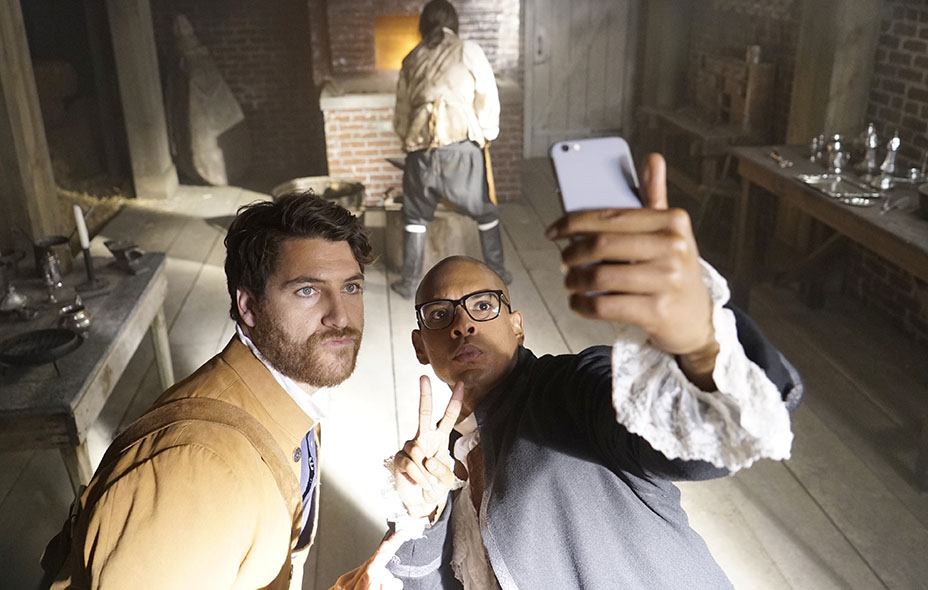 Did the time travel aspect of the show attract you to it? Are you interested in science fiction in general?
I’m a huge sci-fi fan, I grew up just worshipping Vonnegut and Philip K. Dick and comic book authors, so I’ve always been into that aspect of it. So when I read this I was excited someone’s (Julius Sharpe) doing a funny version of the stuff that used to give me panic attacks. If a random guy on the street right now walked up to me and was like, “I have a time machine,” I’d be like “OK let’s go.” No questions asked.

All I read is nonfiction, so in that sense I’m constantly – this is so pretentious to say out loud – but like I’m always on a quest for knowledge, like I’d rather spend my free time learning something.

As a writer, you come from shows where they’re not afraid to address tough topics. How does this show compare with its take on history?
The show is very lighthearted. It is, I think personally, one of the funniest shows to come out in a long time. We do tackle big issues in this show, the show is about our country now and seeing how it was set up and seeing how these two things are directly related to one another. So when we go back we see what decisions are being made then that come to fruition now. That makes it more interesting than the logline would have you believe, because it is very much a family funny comedy but at the time same I think people are going to think, “whoah I wasn’t expecting that.”

One example: gun control is a premise and the drafting of the second amendment and seeing that kind of stuff, and again we take the funny way to it but we’re not going to dodge those issues because all we are is our history.

What do you think about tackling those kinds of topics with today’s political climate going on around you? Was there one issue that stands out to you?
The biggest, or I’d say the one that prevails most, actually, is women’s rights and where we’ve come in terms of a society of recognizing the equality of women. Leighton’s character is a futurist in her ideas, so in the 1770s she’s seen as a mad woman for saying women should be educated and treated equally so when she comes to the present, she sees things have progressed but you also see that things haven’t gotten nearly as far as much as people would like to believe, especially when she starts interacting with other characters. The idea of feminism is a huge arc on the show, and even jokes about racial equality and the big things that seem to be in the zeitgeist right now, all that is addressed in one form or another.

Which historical character did you encounter for the show that you were most excited about?
Later this season there is a gangster that we encounter that I think is so fun and is such a funny take on him. We’ve seen the Scorsese version but our version of it I just think is so funny. Even filming, I couldn’t stop laughing, I thought it was amazing.

For the time traveler in you, which time period would you most want to see? What about your character?
For on set, I think the character would most likely want to see the dawn of a more refined civilization so maybe like an early Rome or Greece, to see laws and education and all of these things develop in real time. Yassir the person wouldn’t travel earlier than 1997, because I just don’t think it would be safe. Depending on the time period, or depending on location – one of the rules of the show, you can travel back in time but only in the location you are. So that being said, if I’m in New York, I would go to the ‘70s, which seems all right, if I were in the south, I’m not going earlier than the 1996 Olympics.

How do you plan on balancing the show with standup and your writing?
I’ll just slowly lose my mind doing as much as possible and seeing what happens. I want to experiment with the idea of what happens when someone doesn’t sleep for six months, so now is the time to find out.

How do you think Making History stacks up against the time travel content out there now?
There are a lot of time travel shows out there, I think it’s impossible for these shows to not overlap in some way, be it in characters or the time period, but I’m just really excited for people to see a fun version of that and that being us, a funny and goofy and really emotional and tight-knit kind of family version of what happens when these people go back and forth and sharing this secret that they can’t let anybody else in on. So they’re driven closer together by that and form this bond. That’s not to take away from those other shows at all but with us you get to see a different, funny or lighter version of that, what happens when it’s not serious people going back every week to stop a bomb. What happens when three friends want to go back to the ‘60s and just want to eat a lunch. We just have fun with it and have fun with the premise of time travel.

Although I am inspired by the time travel stuff out there already, like I do want to call it Black to the Future in season two, so we’ll focus only on me.