GLOW is a women’s wrestling comedy set in 1985 and yet the show’s female-centric storylines set amid a Hollywood backdrop resonate deeply in 2018.

Liz Flahive and Carly Mensch set out to create the Netflix series well before the #MeToo era, but the co-showrunners say they felt “emboldened” to push their storylines further after the news broke about Harvey Weinstein in October of 2017. When the second season of the Alison Brie and Betty Gilpin-starring comedy returns on Friday, the strong yet flawed 15-woman ensemble — plus Marc Maron, who plays their director-coach — will be grappling with the power dynamics and gender politics that come with trying to create a TV show. The first season ended with GLOW, aka the Gorgeous Ladies of Wrestling, successfully launching its pilot and the actresses-turned-wrestlers landing a slot on the broadcast schedule.

While the critically acclaimed first season of GLOW confronted the harassment women of the time period faced, the second season leans even harder on the perils that come with fame and success, as Ruth (Brie) finds herself in a compromising position with their network boss and Debbie (Gilpin) asserts herself at work while going through a divorce at home.

Below, Flahive and Mensch speak with The Hollywood Reporter about the timely themes of season two, the “rarified” air of their female-dominated set, and their goal to move further away from the original syndicated series on which they took inspiration in order to make another loud and flashy stamp on the world.

Betty Gilpin has described GLOW as a Trojan horse for truth and female stories — what are you trying to smuggle in with season two?

Liz Flahive: I feel like we’re a little past the sneaking-in-things phase. (Laughs.) Although, I love that quote. On it’s face and in its experience, breezy is a great world. GLOW is fun, it’s not supposed to feel soapbox-y and then, ideally, that allows you to feel punched in the stomach with emotion when something feels much deeper than you might have anticipated when watching a show about women’s wrestling. Maybe that’s the way we’re sneaky — you don’t expect it to hit you in certain ways that we intend it to hit you.

Carly Mensch: GLOW is very overtly about power and how a small amount of fame can change you and how women sometimes struggle in the workplace. I think we’re not hiding any of the major things we’re taking on this season.

You researched the real GLOW (Gorgeous Ladies of Wrestling) series of the ’80s for season one, but then created your own world. How much inspiration did you take from the journey of the real series when you started to map out season two?

Flahive: Very little in that there was a lot of information we frankly don’t have and couldn’t have if we were creating our own version. What we took was really just the landscape of creating a local show that was syndicated to market and a show-within-the-show that felt like there are not that many rules. You have that feeling when you watch the original GLOW. It’s so many things: it’s sketches and songs and wrestling and weird skits and satire all at once, with indeterminate lengths. That was the freedom of GLOW — you weren’t really sure what it was or how they did it, but you were intrigued and entertained. We held onto that feeling for season two.

How involved was Jenji Kohan (Orange Is the New Black) in the season two stories?

Mensch: Last year, we got to give her an episode to write [“This Is One of Those Moments”], but this year she was a little too busy because she was launching yet another show, American Princess on Lifetime. But she’s deeply involved in the script phase. She reads every script, gives us notes, chimes in on outlines and sits in every single editing session. She has strong opinions in editing and they’re super helpful. She takes a backseat when it goes into production, but when it’s in the script and editing phases she’s fully in it with us, too.

This season will explore the sexuality of more than one character. Was the addition of new wrestler Yolanda (played by Shakira Barrera) in response to viewers wanting more queer characters after season one?

Mensch: We felt it was something that was missing on our show and were excited to have. We had so many characters the first season that we barely had time to get through everyone that we even wanted. So with season two, we wanted it. We were excited about a storyline Yolanda has with one of the other women. We also were excited about this idea of replaceability. We knew we were adding a character to replace Cherry Bang (Sydelle Noel) and that we were going to explore how it feels to have someone take your character. It was our own self-checking. It’s a group of now 15 women, it feels like their sexuality is going to be all over the map in terms of how to represent. Who to tell that story through is really just the question.

The harassment the women deal with is a theme throughout season two. Unlike other shows that are reacting to it, GLOW takes place in a time that precedes the #MeToo era. How much of the ugly side of Hollywood and TV did you always want to show and what did you add in as a direct response to what was going on in our culture?

Flahive: We had talked prior to the Harvey Weinstein news breaking about wanting to do something about sexual harassment, because we have the girls in an environment now where they were part of the network, the network was run by men and there was a new power dynamic we could introduce if we wanted to. We were definitely emboldened to go further with our story once the Weinstein news broke, but showing that side was always in the foundation for us, given the story that we were telling of actresses in 1985.

Mensch: We started this season as we always do, talking about characters and what needed to happen this season and what journey we could send them on. It felt like we started with: What can happen to Ruth this season and how can she respond? Then we also tend to start our seasons by asking: What can we do with Ruth and Debbie to get to core things in their relationship? 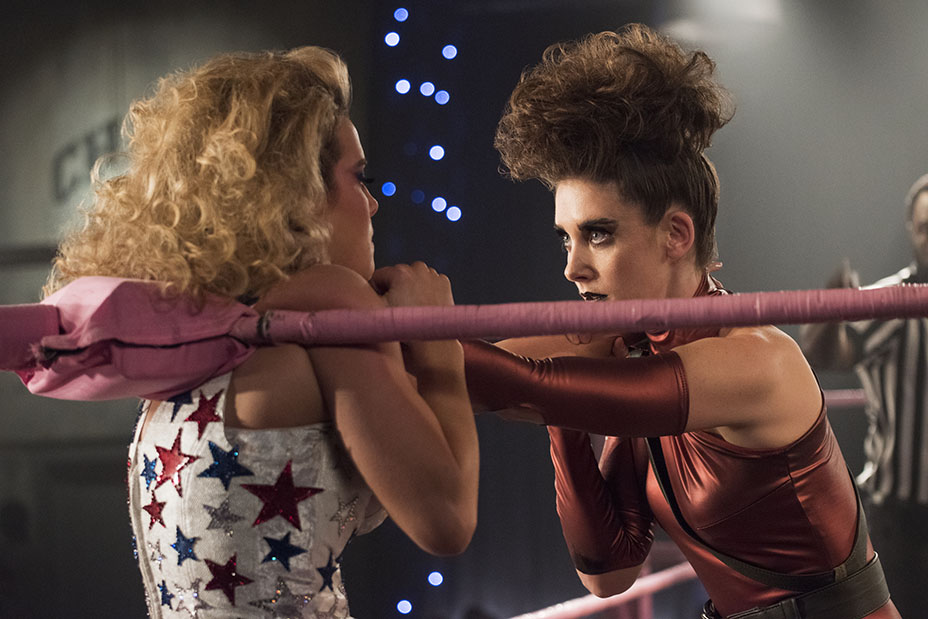 Ruth and Debbie will also be fighting to have each of their voices heard once GLOW the series gets off the ground. Did those storylines spark discussions on your female-dominated set?

Flahive: I remember having a conversation with some women recently who are producers in a mid-career moment and who are wanting to produce studio comedies. They were saying things like, “When I talk to a studio about my contract and needing childcare so I can stay around and produce their movie for 16 hours a day, that conversation drops somewhere and it’s just easier for them to hire a man.” So as much as we are very steeped in 1985 on GLOW, I like having that conversation with people. Carly and I are living in a world where all of our executive producers are women, our network executives are mostly women and gay men. We are breathing very rarified air, but the conversations we’re having with our peers, there’s a ways to go and I feel like that was definitely something we illustrated this season.

Did you funnel some of those horror stories into your GLOW director Sam Sylvia (Marc Maron)?

Mensch: We try to approach all characters as if they are human beings and maybe sometimes Sam is an asshole, but that stems from things, whether it be insecurity or arrogance. We never wanted him to just be an unlikable asshole. We build characters from real places and grounded emotions that we can write and explore. Sam has a journey to go on in season two.

The wrestling gets more complicated and yet the actresses are still doing their own stunts. What transformations have you witnessed from your stars after two rounds of this show?

Mensch: We’re just so proud of them. You ask 14 actors to go through this thing and you assume some will like it and some will not like it, and that the wrestling would be a part of the show that would be met with a world of dread. Instead, we’ve watched people learn this thing that seems… I mean, it’s crazy! They can do things this season that they couldn’t do the first season. I think we’re just astonished. We always come to set when there’s wrestling going on because your mind is blown with what they can do and how we’ve built the wrestling around what they can do. It’s transformed them at least with physical confidence. We’ve heard stories with the women where they’ve felt one way before the wrestling and how they feel now. We’re always hearing those stories and feeding them back into the show. Betty [Gilpin] talks very articulately about how it’s changed the relationship with her body.

The women again had wrestling training for a month with former WWE wrestler Chavo Guerrero Jr. Since the stunts were bigger, how did their physical skills impact the story and what does original GLOW star and consultant Ursula Hayden lend this season?

Mensch: We try to build solely around what the women can do when it comes to the wrestling. We like to see where the story goes with the character and then see what we need, so we try not to lean on Ursula unless we need something cleared up. We really like knowing that we’re building our own world and we don’t want to rely on the original scenarios. We invite Ursula to set and she is fully a part of the show as a contributor.

Flahive: We don’t lean on her for that stuff [about where the women were at this point in the show]. She’ll give us details here and there but because we are inspired by this show and not basing it off what actually happened, Ursula will give us something like a great detail of one thing that happened during her time with GLOW.

The original syndicated series had four years — and 104 episodes — before being canceled. Will you model the future of GLOW after them, or are you charting a new path?

Mensch: We are charting a new path. The more seasons we go on, the further we go from the original and that’s based on the fact that we created very different characters and now we follow our characters.

The 10-episode second season of GLOW bows on Netflix June 29.

How Costume Designers on 'GLOW,' 'The Crown' and More Helped Leading Ladies Find Their Power