The idea for Netflix’s GLOW came out of a one-line email to Jenji Kohan.

“Do you want to make a show about women’s wrestling in the ‘80s?” recalls Liz Flahive to The Hollywood Reporter about the note she and Carly Mensch sent to the Orange Is the New Black creator. “She said, ‘Yes,’ and then it was off to the races.”

Flahive, formerly a writer and producer on Homeland, and Mensch, formerly a writer and producer on Orange, had stumbled upon a documentary about the original women of GLOW: The Gorgeous Ladies of Wrestling, the syndicated TV show that aired from 1986-1990. After getting the seal of approval from Kohan, who is an executive producer on the Netflix series along with fellow Orange exec producer Tara Herrmann, the show’s co-creators say they “went on a research spree” and eventually reemerged with the script for the professional female wrestling comedy that is now set to release its 10 episodes on Friday.

Here are five things to know before hopping into the ring with GLOW this weekend.

1. Who Are the Gorgeous Ladies of Wrestling? 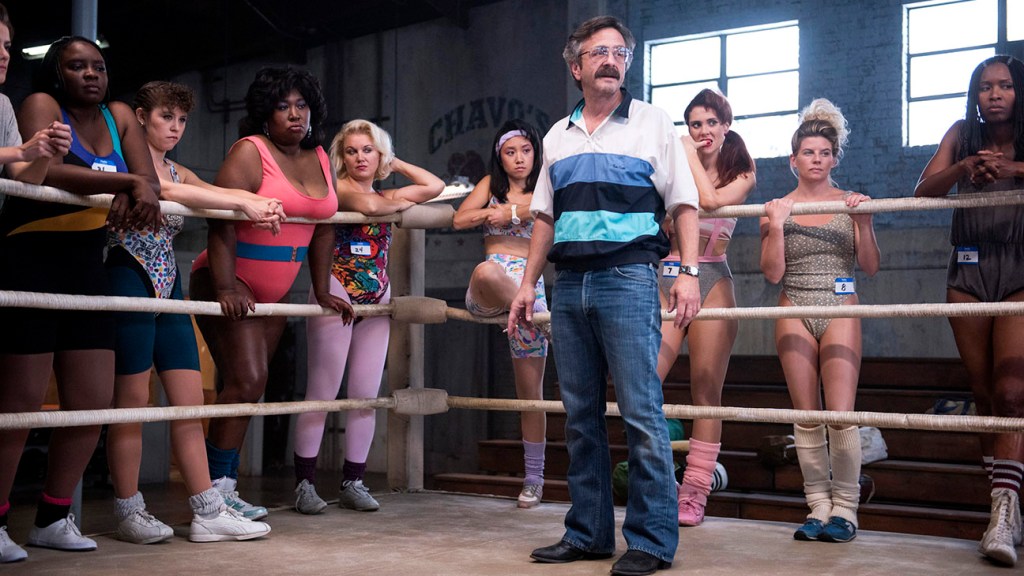 The original series, GLOW: The Gorgeous Ladies of Wrestling, broke glass ceilings and went on to become a cult hit. Over four seasons and 104 episodes, the show featured wrestling matches, sketch comedy and followed the lives of the women both in and out of the ring as they assembled their campy personas and alter egos. Though Netflix’s GLOW is only inspired by the original series and tells a fictionalized story, there are certainly parallels to be drawn — aside from the “big hair and body slams.”

Alison Brie (Mad Men, Community) stars as Ruth Wilder, an out-of-work actress whose last-ditch effort at stardom comes when she auditions for the first-ever women’s wrestling TV show. Twelve other “Hollywood misfits” are chosen to join Ruth in the ring, in addition to her best friend turned rival, soap star Debbie Egan, played by Betty Gilpin (Nurse Jackie). Flahive and Mensch also worked together as writers on Showtime’s Nurse Jackie, which is how Gilpin landed the role.

Like the original series, Netflix’s GLOW is set in Los Angeles and sees the women being coached by washed-up director Sam Sylvia (Marc Maron), who joins forces with a big-pocketed Hollywood producer (Chris Lowell). The original GLOW was created by B-movie director Matt Cimber and producer David B. McLane and was born out of Jackie Stallone’s women’s fitness gym, Barbarella’s. Wrestler turned Hollywood stuntman Mando Guerrero served as the trainer and his nephew, Chavo Guerrero, Jr., now trains the women for the new series.

2. The First Season Is an Origin Story 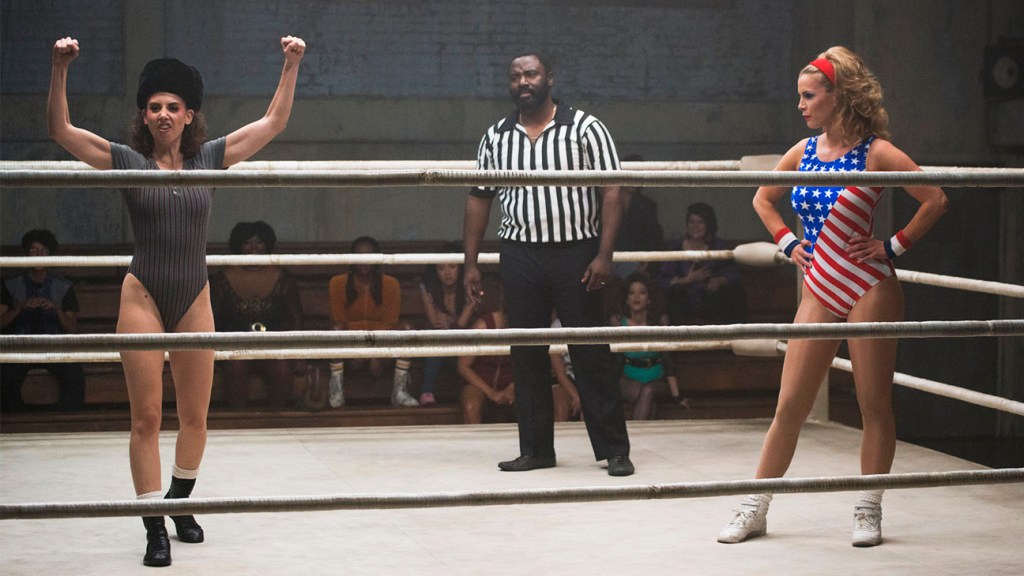 Assuming GLOW will see future seasons to come for Netflix — and that the show within a show gets picked up — this first season functions as an origin story and takes its time building up to a big extravaganza in the finale. While the original syndicated show was a big production, filming out of Las Vegas’ Riviera Hotel in its first two seasons, the Netflix story starts off as an underdog tale as Sam struggles to get the series off the ground. The result of that creative decision comes with more time spent on the lives of these women outside of the ring, including the complicated, backstabbing relationship that ensues between Ruth and Debbie (one that helps inform the characters they ultimately embody in the ring).

3. The Women Do Their Own Stunts 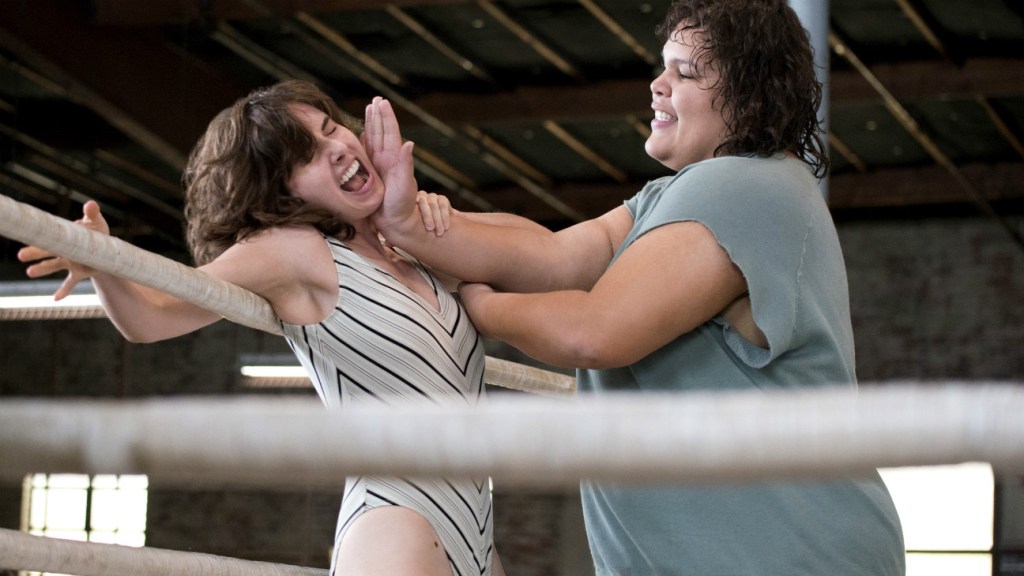 Thanks to wrestler-trainer Guerrero Jr. and stunt coordinator Shauna Duggins, the wrestling moves viewers will be seeing in the ring are primarily done by the actresses. The decision to have the stars do the bulk of their own stunts was in order to maintain authenticity as the characters grow their skills in the ring.

“It was something that was in the audition notices,” says Flahive. “We needed actors who were game and were physically able or willing to become more physically able to do the moves. We knew from the beginning that it was a show about bodies and women using their bodies in ways that they hadn’t before and in ways that we as an audience hadn’t seen before.”

Brie tells THR they did four and a half weeks of wrestling training and both she and Gilpin, who also worked with personal trainers for strength and agility, say the prep for the show has changed their bodies. “It was very important to us that we were able to do every move that our characters were doing on the show, and we were,” says Brie, who assures there were no major injuries on set but “definitely bruising.”

How Alison Brie Got in Fighting Shape for Netflix's 'Glow'

4. Who Is the GLOW Audience?

Given the fact that three of the four executive producers on GLOW hail from Orange Is the New Black, it’s no surprise that the comedy has a similar feel and will appeal to the same audience who has been tuning into the antics of Litchfield’s female prison for the last five seasons.

“GLOW is not prison — it’s way brighter than prison,” Brie says of the neon-happy 1985 backdrop. But the focus on the women, including the little-known actresses, is what places GLOW and Orange in a similar category. “Shows like GLOW and Orange Is the New Black, and people like Jenji, Carly and Liz are definitely leading the charge of creating interesting and exciting characters for all different types of women and aiding in finding roles for unknown actresses.”

Though Brie says that fans of the original GLOW are more excited than anyone when she speaks about the show, she admits she’s “very curious to see how actual modern, contemporary wrestling fans feel about the show.” Adds Maron, “Chavo Guerrero Jr. is a real wrestler who comes from a line of real wrestlers. He was very on top of making sure it was credible. The original series definitely got the stamp of wrestling approval from Chavo, and that means something in that world.”

5. Is the Show Meant to Be Binged? 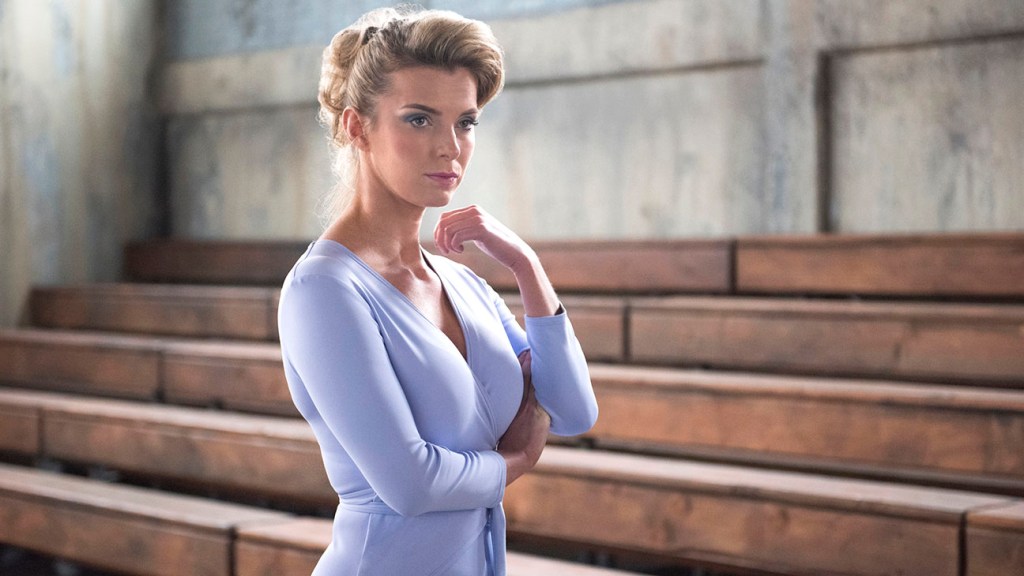 With 10 half-hour episodes, the full season of GLOW could essentially be binge-watched in a weekend afternoon — but should it be? “It takes a few episodes to settle into what Brie is doing, because Ruth is so convincingly a not-very-good actress,” reads THR’s review. Once viewers find their footing with Ruth, however the true heart of the story emerges, making the middle and back-half of the season a fun and emotional binge-worthy treat. “The moment [Ruth] locks into her identity comes midseason in the one episode written by Kohan, and with those factors in play, it’s no surprise that that’s when the show seems to settle into itself as well.” The bottom line: Worth stepping into the ring for.

Check back in with Live Feed for full interviews with Flahive and Mensch, cast chats and full show coverage when GLOW bows Friday on Netflix.