[This story contains spoilers from the fifth episode of GLOW season two.]

Midway through the new season of GLOW, the Netflix female wrestling comedy trotted out an all-too-familiar Hollywood horror tale. Then it decided to dig deeper.

After seeing some success with their GLOW TV show featuring the Gorgeous Ladies of Wrestling, leading wrestler Ruth Wilder (played by Alison Brie) finds out their network boss is a fan of her Russian villain character in the ring and wants to meet for dinner to discuss her career. When she arrives at the Hollywood hotel’s restaurant, however, the scene plays out like too many others that have made headline news since Harvey Weinstein kicked off the #MeToo movement last fall.

Ruth is told by the maitre d’ that the executive, named Tom Grant, “always takes dinner meetings in his room.” Wary but determined, Ruth knocks on the door of his bungalow and is relieved to see that Mr. Grant is joined by another familiar face at the network. But the complicit exec soon makes an excuse to leave and that’s when Mr. Grant comes on to Ruth, groping her while simulating wrestling moves and asking her to join him for a bath. When he leaves the room to check on the jacuzzi, Ruth seizes the opportunity and runs out the door.

Set in 1985 Los Angeles, GLOW follows a group of 15 actresses-turned-wrestlers and is inspired by the syndicated series of the same name from the ’80s. The second season launched on Friday, and although creators Liz Flahive and Carly Mensch always planned to highlight the harassment women in 1980s Hollywood faced, the pair say they were “emboldened” to take their storylines further post-Weinstein.

“It felt important to us for Ruth, who felt a little bit naive of how the industry worked, to have a reality check,” Mensch tells The Hollywood Reporter about the ripped-from-the-headlines moment in the fifth episode. Much like the actual set of GLOW, the show-within-a-show’s set is also female-dominated and a much safer space than many others at the time. “In a meta way, our set there is somewhat of an empowerment bubble where the women are in charge of their own narratives — Ruth can even give input with the director, [Sam Sylvia, played by Marc Maron]. Putting her in that situation felt authentic.”

Flahive adds to THR, “We had talked prior to the Harvey Weinstein news breaking about wanting to do something about sexual harassment, because we have the girls in an environment now where they were part of the network, the network was run by men and there was a new power dynamic we could introduce if we wanted to. We were definitely emboldened to go further with our story once the Weinstein news broke, but showing that side was always in the foundation for us, given the story that we were telling of actresses in 1985.” 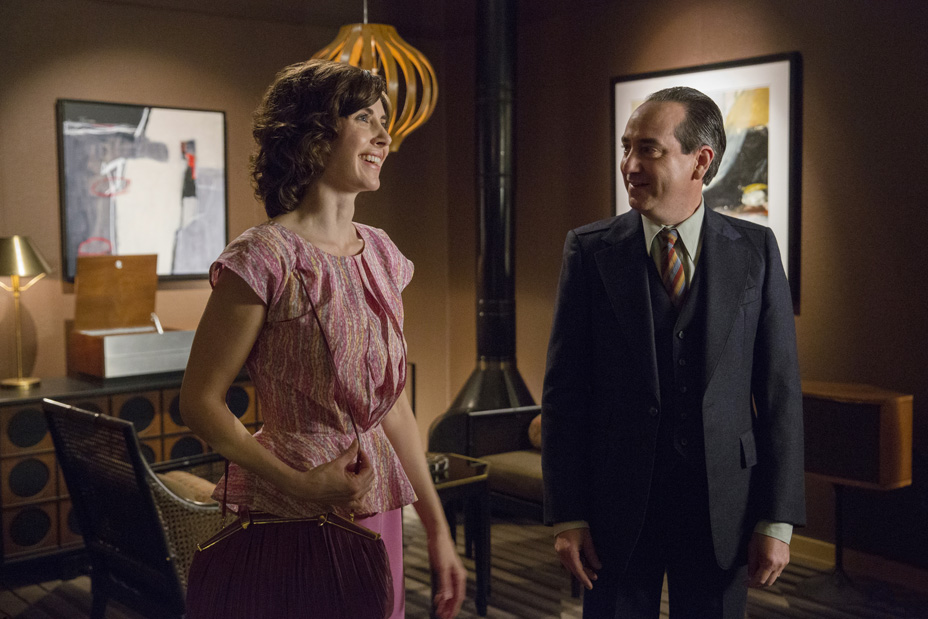 But the real “meat” of the storyline comes after Ruth’s escape — when the network boss punishes the entire show by taking away their primetime platform and instead buries them in a 2 a.m. timeslot. Assuming the move is her fault, Ruth confides in her estranged friend and fellow wrestler Debbie Egan (played by Betty Gilpin), expecting to be met with a sympathetic ear. Instead Debbie, who is also a hard-fought producer on the show, fires back by asking Ruth, “How could you be so fucking stupid?”

What ensues is a back-and-forth argument between the women that highlights two very different perspectives in a pre-#MeToo world. Debbie, who enjoyed success as a soap star until she was fired for having a baby, tells her aspiring actress friend, “That is how this business works! Men try shit and you have to pretend to like it until you don’t have to anymore.” When Ruth, who had an affair with Debbie’s husband, fights back and insists that things should not work that way, Debbie balks at her naivete: “Congratulations Gloria Steinem, the one time you keep your legs shut we all get fucked!”

For Flahive and Mensch, the power of the harassment episode was in this honest confrontation between their two starring characters, which lasted nearly five minutes.

“What was most complicated and interesting for us was that conversation between Ruth and Debbie,” says Flahive of the scene, which was written and directed by women (Rachel Shukert and Claire Scanlon, respectively). “The event felt like the event and the conversation felt like the thing to grapple with. The conversation between these two women who were both in the industry, who both had different perspectives and experiences, who both had a different experience with success, or lack thereof. That was the meat of it for us.”

Mensch adds, “And we wanted Debbie to land punches. We didn’t want her to be kind of a straw man and for Ruth to be right and for Debbie to be wrong. It felt important to us to hear the full conversation about how people think about these types of events.”

From the argument, it’s clear that Ruth doesn’t think of herself as “the kind of person” who would use sex to further her career. But Debbie flatly pointed out, “You’re supposed to make him think that you might fuck him.” Adding to Ruth in rebuttal to her feminist claims, “Feminism has principles, life has compromises: You don’t make it better by flouncing out like some Victorian school marm every time some sleazeball puts his hand on your knee. You’re taking 20 other people down with you!”

'GLOW' to Tackle Harassment, Sexuality and "Ugly Side" of TV in Season 2

When Gilpin first read the script, she says she immediately balked at having to be on that side of the argument.

“At first I had a visceral negative reaction. I was so disappointed in her. I thought, ‘Oh God, we’re making her evil.’ And I was really angry with Debbie,” Gilpin tells THR. “But then I realized that her reaction isn’t about Ruth at all. She’s thinking only about her own experience and feeling shame and regret and vulnerability.”

In Gilpin’s mind, Debbie would have reacted very differently if she had been the one in the bungalow instead of Ruth. “Debbie wouldn’t have walked out,” she imagines of her character. “I don’t know that she would have had sex with the guy, but she would have teased him into thinking there’s a world in which it could have happened so that she didn’t upset the boss.”

What the conversation between Debbie and Ruth shows to her is how women didn’t support each other then in the way they do now: “Of course the main problem is men behaving as predators, but something that is unique to our time now is women becoming more vocal and supportive when they speak out, whereas in 1985 that wasn’t the case.”

Much discussion and sensitivity went into getting the harassment scene right, given the layers of complexity the show was intending to portray. To hear Brie tell it, Ruth wasn’t trying to be a hero in the moment.

“Ruth’s not a hero for leaving. I feel like she leaves because she’s afraid and doesn’t know what to do,” Brie tells THR. “What we’re showing is the slippery slope of how easily a woman can find herself in that position. Someone who is smart, strong and level-headed can find themselves at the mercy of a really devious person.”

That precarious position is why Ruth didn’t necessarily expect to be applauded by Debbie, but she expected sympathy and “doesn’t get any of that,” says Brie.

“What you see in that scene is one actress’ resentment toward another actress not following the rules that she had been made to feel like she had to follow her whole career,” Brie explains. “And in that way, Ruth is really naive when it comes to the entertainment industry. Having had zero success as an actress, she really hasn’t found herself in difficult positions very much of the time. So you’re also seeing this learning curve of someone gaining even menial success for the first time being confronted with that kind of behavior.” 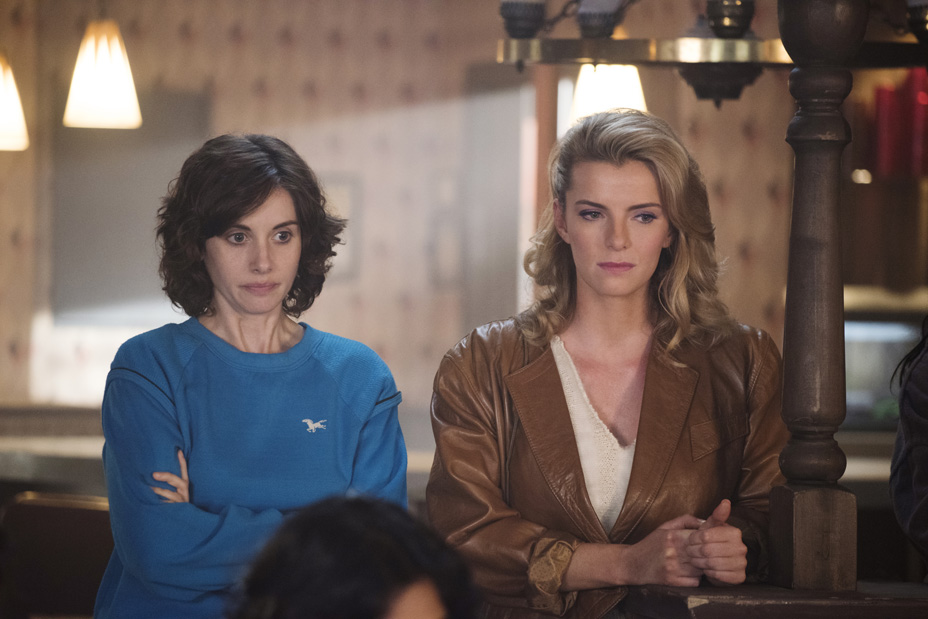 Both Ruth and Debbie fight for a seat at the table this season, with Ruth pushing to direct and Debbie fighting for equal pay and her producer role. But similar to their differing points of view on how to professionally deal with predatory players in Hollywood, their quests for power are also staggering.

“They’re fighting for very different things,” explains Mensch. “Debbie feels empowered that with both her career and her status and how much the show needs her to ask for a seat at the table. Ruth is trying to find some type of creative outlet for herself. She’s directing because someone needed to step up and because she loves the show. She’s not fighting for a seat at the table so much as: if you block her one place, she’ll try another place to try to put her creative energies.”

And it’s those differing personality traits that line the rest of the twosome’s second-season path: “Ruth has a lot of opinions and she’s only just starting to learn how to share them, whereas Debbie is more along the lines of believing that she deserves a spot.”

The 10-episode second season of GLOW is streaming now on Netflix. For more season coverage from THR, head here.