It’s no secret that Adam F. Goldberg loves the 1980s. After all, he didn’t just grow up in the era of Cabbage Patch dolls and Members Only jackets. He also created a series about it: The Goldbergs. And now that his show is in its third season on ABC, he’s decided to collect a few new mementos from his adolescence. Namely Lea Thompson (Back to the Future) and Joanna Kerns (Growing Pains). He loved their work back in the day, and now he’s hired them as Goldbergs.

“Make no mistake, I hired them for their directing skills,” Goldberg tells THR. “I’ve always believed actors make for good directors, and these women were two of my favorites growing up. I was thrilled when I found out they might both be able to do our show. Although I admit it wasn’t easy to keep from harassing them with questions about their shows and movies.”

Kerns already had more than 50 directing credits, stretching back to the days when she says Growing Pains producers “gave me a shot to squeeze one out, in our second to last episode, I think. Not many others would have done that at the time.” She’s already directed two Goldbergs episodes, including the show’s holiday episode, airing Dec. 14.

She offers equivalent praise for Goldberg’s showrunning skills. ”Adam has such a strong point of view with his work, it makes the process enjoyable for a director. It’s hard to work on a show where nobody knows where it’s going, but The Goldbergs already has this beautiful world that’s so vivid.” 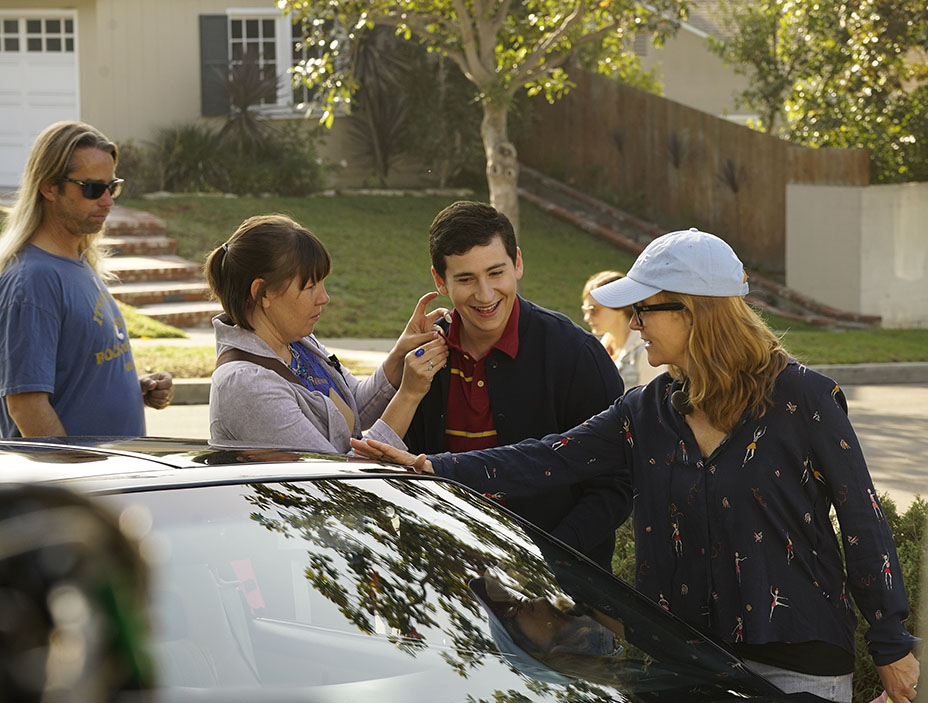 Meanwhile, Thompson has starred in Switched at Birth and is marking her first broadcast directorial debut following multiple episodes of her Freeform series as well as a pair of Hallmark TV movies. She first spoke with Goldberg a year ago, when The Goldbergs did an episode involving her ‘80s film Space Camp and he wanted to quiz her about what that experience was like. The conversation led to Goldberg inviting Thompson to direct the upcoming Thanksgiving episode, airing Nov. 16.

“When you hire directors, you’re most concerned about whether or not someone from the outside will get the jokes,” says Goldberg. “That might be why I think actors can make for the best directors, like Lea and Joanna. When I first started talking to Lea, I knew she’d done both multicam and single-cam shows in the past, and acted in every comedy format there is. So I realized right away she’d have the jokes play out the way we want to. And Joanna…I saw her name on a list of available directors and the truth is, I grew up with her show and I wanted to meet someone I watched as a kid.”

Luckily, both women were just as enthusiastic about The Goldbergs.

Kerns explains that “you can’t be an actress from the ‘80s and not see the humor of the show. Watching it reminds me of an innocent time, and makes people feel good abut themselves.” Meanwhile, Thompson says that she has “a super affection for Philadelphia, having been a dancer there years ago. Plus, being married to a New York Jew, I have learned how healthy it is for people to be honest and express emotions. Which is what The Goldbergs is all about.”

It didn’t hurt that Goldberg was not only looking for directors with a comedic bent, but also for women directors, period.

“ABC has heavily encouraged me to hire female directors,” he explains. “And you want people who come with experience, which I knew both Lea and Joanna had because I grew up watching both of them. That’s important because my job is to create and write. I have nothing to do with the actual filming of the show. I just let the directors loose on the set and only get involved if the actors aren’t happy. And the way I knew Lea and Joanna had done a great job was that I never heard from any actors the entire weeks they were working.”

Despite his and ABC’s willingness to seek out more women involved as directors, though, men still tend to get the vast majority of TV gigs. Kerns and Thompson are happy for the directing work they are able to get, but they also admit it isn’t easy.

“I was so grateful when the Growing Pains producers let me direct because there weren’t many getting a chance at the time,” explains Kerns. “I had no idea this would be such a climb. There have been times when I’ll get in for meetings and be told, ‘We already have our woman.’ But things do seem to be improving as crews get younger. The directors of photography aren’t just the old guys who only want to work with men.”

Adds Thompson, “I’ve worked with a lot of female directors as an actor. They’re great, and they’re trying to represent. And I do think that sometimes it’s just nice for a cast to have variation in who they work with. I think having been an actress is an advantage too. You can feel certain things that represent women and actresses’ vulnerability. And I agree. I’ve seen the real difference in the 10 years I’ve been directing.”

In watching the work of his two new directors, Goldberg says he “realized right away I didn’t have to worry because they will have the actors do the joke the way they’d want to if they were in the role. In fact, the director’s cut of Joanna’s first episode was so great, I had to move the airdate up.”

He’s eager to do more episodes with Kerns and Thompson, something that the women both agree is slowly being replicated all around Hollywood. Kerns cites the success of fellow female directors like Lesli Linka Glatter (Homeland) and Pam Fryman (How I Met Your Mother, Two and a Half Men) as proof. She figures “the pressure had been put on the studios to open up to hire more female directors has been good and worthwhile. I’m always meeting a lot of women who can do the job.”

“This is the best time ever for us,” Thompson continues. “There are a million film schools out there, with something like 32,000 graduates with degrees. Nobody has to give us jobs anymore. We earn them. That wasn’t really possible when Joanna and I started.”