[This story contains spoilers from the Jan. 10 episode of The Good Place, “The Book of Dougs.”]

The Good Place featured one of the most conventional, normal moments of its entire run in Thursday’s episode: Chidi (William Jackson Harper) and Eleanor (Kristen Bell) went on a date.

Sure, it happened in a sitting room of the mail center of the actual Good Place, where the characters finally landed after eluding Bad Place demons and spending time in Janet’s (D’Arcy Carden) void that nearly damaged her beyond repair. And they did so while reformed demon Michael (Ted Danson) attempted to convince the Good Place’s governing committee to investigate whether the Bad Place has rigged the points system that governs entrance into the afterlife, which an exasperated Michael is told will take hundreds of years. And part of the date involves Chidi dressing up as a mailman, which turns Eleanor on.

But still: It’s a date between two people who, despite obvious differences they continue to acknowledge, may actually be the best things to happen to one another.

“It’s really all we can do at this point,” Harper tells The Hollywood Reporter about how Chidi and Eleanor spend their time in “this weird anteroom to the Good Place.”

“All we have is each other — all the humans, that’s all we have, is each other,” he said. “Chidi has been thoroughly broken and put through the wringer this year. It’s a way of really focusing on what’s ahead of us. For me, that’s how it felt like we should be playing it.”

Harper spoke with THR about Chidi and Eleanor’s deepening relationship, keeping all of his character’s actions straight (or not) and the reaction to his shirtless scenes earlier in the season.

Even as Chidi and Eleanor become closer, there are elements of the two characters that seem so mismatched, as evidenced by Chidi’s reaction to her being comforted by the smell of water-park barf. What’s the intangible thing between them?

We sort of complete aspects of each other that we didn’t know were missing. For Eleanor, she’s really smart and resourceful, and it’s not studied, and it’s relative to the situation. As she’s becoming a better person, that sort of particularism and relativism is really starting to come to the fore, and has become something we can all rely on and trust as the right thing.

Chidi is a little bit more rigid and has looked in a book for what is the right thing to do. You know, what are the rules? What is the rule I can apply to all things and never be in the wrong? I feel like his central struggle over the course of the entire series has been running into the roadblocks that come with that kind of rigidity. She sort of helps him bend a little bit that way, and he’s really open, kindhearted and sincere. She’s hurt — she’s been hurt a lot, and it’s made her very hard and very biting. The two of us together, I allow her to sort of be gooey and cheesy [laughs]. I’d like to think that’s something she needs.

She seemed in the early going to have a more implicit understanding of what makes Chidi tick. Do you think he’s coming to understand her more as well?

I think so. For all of her rough-around-the-edges nature, she does really take other people in and do nice things for them. It’s an interesting thing, where she just puts herself out there without making it a thing. And he can be so locked up with indecision and thinking about what’s right and what’s correct that he can’t get out of his own head, can’t see the forest for the trees. It can almost turn into kind of a self-obsession. Chidi having been through what he’s been through this year, he’s finally able to really take people in and really start to try to learn more about her. Rather than sort of question and judge her, he’s able to just look at it and try to understand it.

After Chidi’s brain was broken in the “Jeremy Bearimy” episode, he seems to have thrown off some of his indecisiveness. Was that a side you had been pushing to see or did it come more from the writers?

It definitely came from the writers — anything that they give me to play, I’m excited to try. But the “Jeremy Bearimy” episode for me really leans into my sense of humor, which is gonzo and non-sequitur and random. It was fun to just go nuts [laughs]. It was really fun, even though I had to take my shirt off and that was terrifying. The rest of it was a lot of fun. And even the shirtless stuff was fine after I got used to it. Once they didn’t tell me to just put it back on, I was like, “OK, I guess I’m doing all right.”

Speaking of that: How much of the Swole Chidi memes and commentary have you interacted with?

[Laughs] I haven’t. I feel like there’s really no way I can really interact with it without being a douchebag. … It’s wonderful that folks appreciate it and like it. It makes me feel really nice, and I’m really happy about that. But yeah — I feel like there’s nothing I can say about it that doesn’t make me sound like a real dick [laughs], so I’m just gonna leave it alone. 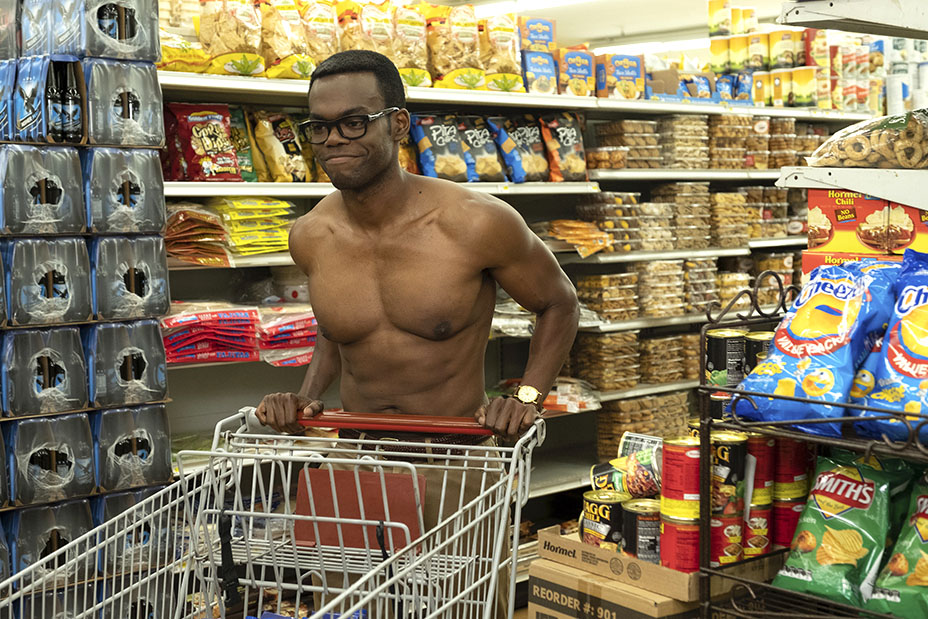 Would Chidi think it ethical to spend that much time on one’s body, as you’ve evidently done?

There’s a pretty detailed breakdown online saying it is ethical.

Yeah, actually [Good Place creator] Mike [Schur] sent me that. I was like, yeah, this is fine. I have a friend who’s a professor — I won’t say what school he’s at, but it’s an Ivy League school, and this guy is a super-erudite professor who is just as jacked as any man I’ve seen in my life. When people were saying “Oh, there’s no way a professor could be that jacked,” I wanted nothing more than to take a picture of my friend with his shirt off and post it everywhere. … But I wouldn’t do that to him. But that guy is crazy ripped.

Chidi doesn’t remember all the reboots he’s gone through in the Bad Place, but you had to play all of it. Having done that, is it ever hard to set aside or separate what you know vs. what Chidi does?

It’s not that hard, actually. I thought it would be, but A) there’s such a long gap between when we finish shooting one season and when we start another that it’s easy to forget some of the things that happened. And B) I’m a theater guy, I’ve done a lot of work onstage, and it’s sort of built in to how I work, to try to do everything moment to moment as if it’s happening right then. Every night you go to the theater, you’re starting at the beginning and going through to the end. There’s something about the way this TV show works which kind of leans into that mental space. Every time it’s a new thing. That makes it a little easier to play. I think if I had to retain everything from the first three seasons going into the next season, that would actually be a bit harder because there’s so much material.

What can you say about the last couple of episodes of the season? Will they get to see more than the Good Place post office?

This is obviously a kind of a bottle episode. Obviously we don’t just stay in this one place, but these last couple episodes are really special. I’m hesitant to say too much about them because I love them so much. I really think for our fans and the audience to take this ride of these last three — I think it’s way more rewarding if you have no idea what’s coming at you. But they’re particularly special to me.

'The Good Place' Renewed for Season 4 on NBC