[This story contains spoilers from the Jan. 18 episode of NBC’s The Good Place.]

At the conclusion of Thursday’s episode of NBC’s The Good Place, Michael (Ted Danson) took a step closer to becoming human by sacrificing himself for the core four: Eleanor (Kristen Bell), Chidi (William Jackson Harper), Jason (Manny Jacinto) and Tahani (Jameela Jamil). But in doing so, he landed himself in the worst Bad Place yet — figuratively and literally.

The man who plays him, however, is sitting in a pretty good position. Coming off a Critics’ Choice win and an early season three renewal for the Mike Schur comedy, Danson is experiencing a level of critical acclaim he hasn’t seen since Cheers. Throughout season two, demon turned quasi-mortal Michael has often stolen the show and turned a sitcom about ending up in hell into a comedic character study of what it means to be human.

With two episodes remaining in season two, Danson loosened his bow tie a bit and spoke with The Hollywood Reporter about working on the fastest-paced show of his career, what The Good Place might say about our world and, of course, what comes next for Michael.

This episode ends with Michael pushing Eleanor into the portal to save her, but this whole season has really been about Michael’s development.

It’s the humanizing of our favorite demon. It really has been about watching him, first out of selfish necessity — if you can’t beat it, might as well join them or else we’re all going to be destroyed by the real bad guys. But then he slowly starts to identify with humanity. I think Eleanor is his entrance into this humanizing process. It’s been really fun. You never know where Mike Schur is going to turn next.

You’ve really been on the fast track though. What’s it like, continually adapting a character who is changing every episode?

Mike pitched the arc of the show when he met with Kristen, and later when he met with me. He clued us in about roughly where he thought the show would go, including the second season. So I knew this was coming. I would watch the first season and my performance as Michael and wonder, “Wow, this is either exactly what I should be doing, or just some really bad acting,” because Michael was so relentlessly, cheerfully over his head. You never saw him at a private moment, so you never really got to understand him. He was just this overly bow-tied guy. It’s kind of a relief this season to finally see who he really was. You got to see him scrambling to save his rear end.

Tiptoeing around the end of the season must be impossible, right?

Part of my hesitancy to talk about the show is that it’s so difficult. The show is so evolving in every moment, for us actors as well. Mike Schur is this puppet master who knows where he’s going, but until we try it on for size and actually act that particular episode, I’m always flying a little bit blind about where we’re going. It’s unpredictable, which makes it so much fun to watch.

How far ahead do you know where this crazy universe is headed?

I think I know the first episode of next season. I know the direction, and I know the twist from the end of this season, but that’s it. I don’t know how that will impact my character or what’s in store for him. But you’ve seen us in The Bad Place now. 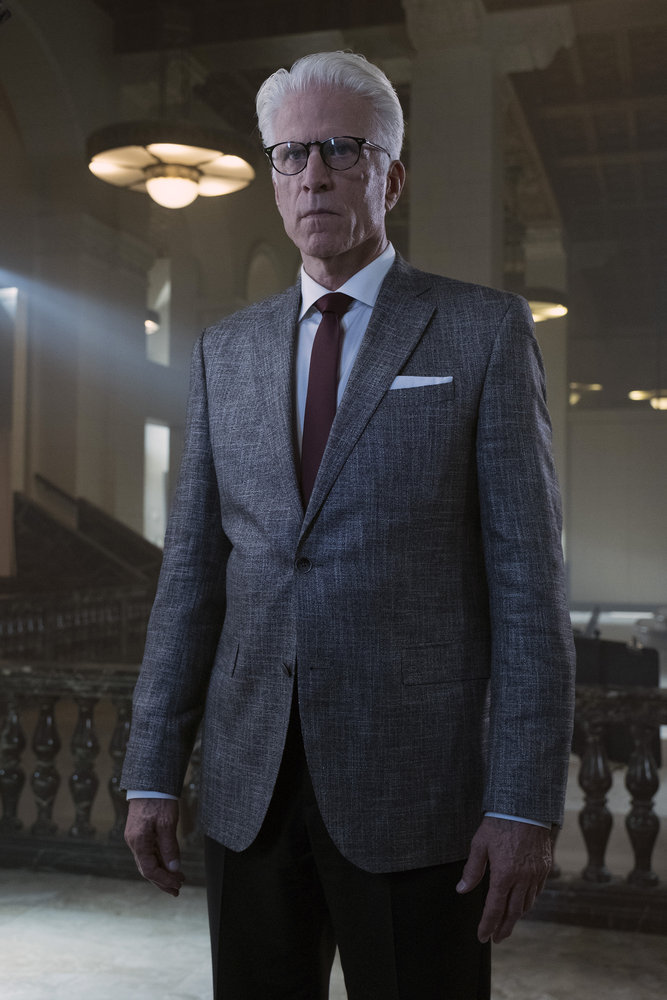 How much time will we be spending in The Bad Place?

Um, I’ll leave you in mystery. (Laughs.) But I will say, enveloping the whole town and moving on is definitely a bold move. To take your home location, fold it up, and say, “That’s gone.” It’s pretty bold. I am eager to see what next season is like because wherever we’re walking, it won’t be the same

In terms of your work with D’Arcy Carden, who plays Janet, it seems like you two have really hit a stride this season.

She’s a delight. She’s so fast and so quick. It’s kind of funny. I remember the first couple of weeks of shooting The Good Place, I felt sorry for D’Arcy. Here the rest of us gets to do all these fun things and she’s just this informational system robot. (Laughs.) It turns out to be one of the most astounding characters because she gets to play Good Janet and Bad Janet, and Good Janet falling in love and kind of is becoming humanized herself. Watching her play that and walk that fine line is really impressive. I’m astounded by the work she did this year.

Would you say that in different ways, your characters are on the same journey?

I agree entirely, especially in that episode where we declared our relationship (“Janet and Michael”). She’s the closest thing to a friend that Michael has. [That episode] definitely cemented us both as learning what it is to be human. There are ripple effects to everything we do, and what we do goes out there and has an impact, good or bad. In watching these two — a demon and a robot — we’re talking about what it is to be a human in these most incredible times we’re living in, and yet, Mike Schur is doing it with this 9-year-old sense of humor.

Do you think that humanity is what draws people in? The show seems to always be gaining traction.

Jimmy Burrows, who co-created Cheers, used to say, “The more you’re on television, the more you’re on television.” And familiarity does breed more viewers. I think there’s a little bit of that. And Mike Schur doesn’t talk down to the audience. It’s very smart. It’s very fast. It’s faster than I’m used to. I’m used to a writing and editing process that’s a little slower. Mike Schur is an incredibly decent, bright human being who really cares about people and things. He’s incredibly smart, and I think that decency comes out in our show. He’s really a remarkable man. People legitimately sing his praises. I think his sense of decency is part of that. I really want to hang it all on decency.

In the world we’re living in, decency seems like a good foundation to build on.

I agree. And [the show] is not preachy. Mike bathes it all in a sense of humor that includes fart jokes and magical visuals that distract you from the fact that there’s a lot of decency to be absorbed.

We finished up in August, and we’ll start again in April. I’m glad we’re not FaceTiming. I’m kicked back in the most unhurried, unbusy fashion. But let’s go with that I’m terribly busy though — I like that. One of the smart things Mike Schur decided, and coincidentally Kristen and I prefer, is to only shoot 13 episodes [a season]. Mike felt that he could deliver an action-packed arc with 13 episodes … if he had to do 22, it would be filler.

As we head into the finale, you know what happens, but do you have any theories that you can (or can’t) share?

There is some secrecy I’m bound to for the next week or two. But the writers have reassembled, and I think they’ve just started writing for the third season, so I truly am in the dark when it comes to the next season. Regarding the unaired episodes, I have nothing. Except that it’s bold — it’s very bold.