It’s been three years since ABC Family rebranded as Freeform, and if any show embodies the network’s shift in focus from family friendly programming to young adult “becomers” (viewers 14-34 who are experiencing firsts in their lives), it’s Good Trouble.

The spinoff of The Fosters, a show about a blended, multi-ethnic family headed by a multiracial lesbian couple, follows adoptive sisters Mariana (Cierra Ramirez) and Callie (Maia Mitchell) as they move to Los Angeles and begin their new careers — MIT grad Mariana as a software engineer and law school grad Callie as a law clerk studying for the bar.

'Good Trouble': How the Freeform Drama Puts a New Spin on 'The Fosters'

That’s why everything on the series — online dating, sure, but also legal injustices, body shaming, sexual harassment and many more serious issues — is treated as both vital and important. Law clerk Callie’s big case involves a cop accused of shooting and killing an unarmed black man, and one of the sisters’ roommates in their Downtown Los Angeles commune, the Coterie, is a Black Lives Matter activist who ends up working with the victim’s mother. An upcoming pair of episodes will feature a fellow law clerk who was sexually harassed by a judge. And another storyline features the trans sister of another Coterie resident fighting to legally establish her true identity. 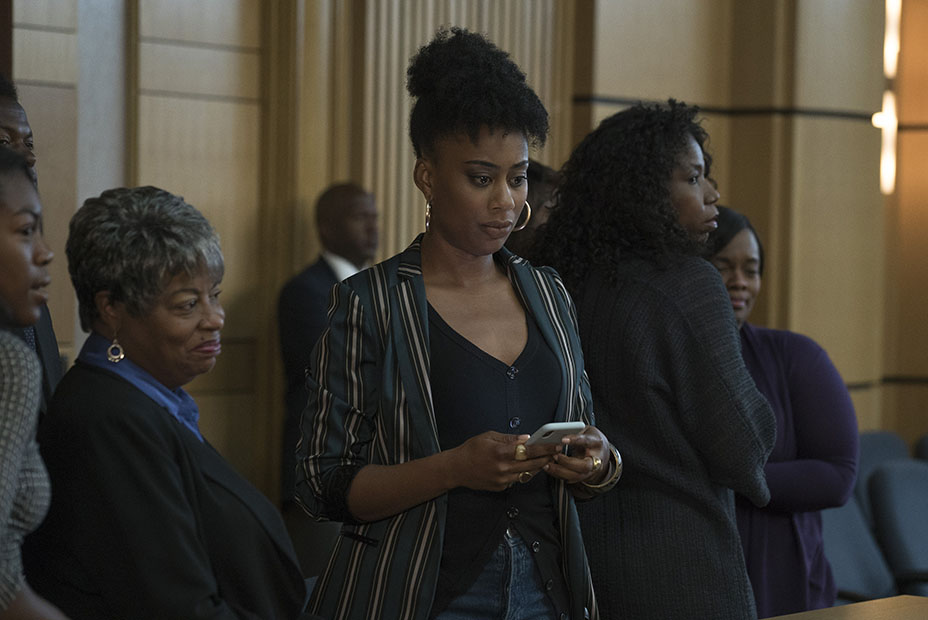 Like The Fosters, no personal or political story is taboo. But on Good Trouble — which was co-created by Paige, Joanna Johnson and Bradley Bredeweg — they are stories about issues young adults actually deal with and things they care about. That means both social justice and one-night stands.

“The challenge of creating a spinoff of a show that has a really passionate fan base is you want to make a new show, but you want to protect as much as you can and honor as much as you can about what the fans love,” said Paige, who co-created Good Trouble with Joanna Johnson and Bradley Bredeweg. “We aged up our characters because our network aged up, because time has aged up our actresses, because we wanted to tell more aged-up stories, but we also really wanted to protect that heart and that political drive that was at the center of The Fosters — the very notion that the political is personal.”

In Good Trouble‘s Feb. 26 episode, Callie’s law clerk co-worker Rebecca (Molly McCook) disagrees on the best way to deal with a colleague’s workplace harassment situation. With that story, Paige said, he and the writers wanted to tackle the class and race struggle in the U.S. “where white men of a particular age hold a disproportionate amount of power” but on a personal level.

“It comes out that one of our characters has had a really negative experience with a similarly empowered older white man, and we follow her through this journey of what’s at risk for her to come forward about that, and what the consequences of that coming forward might be.”

Callie’s continued work on the Jamal Thompson case will see Callie, an activist at heart, struggle with the fact that her role as a law clerk is not to change the law, but to interpret the law. 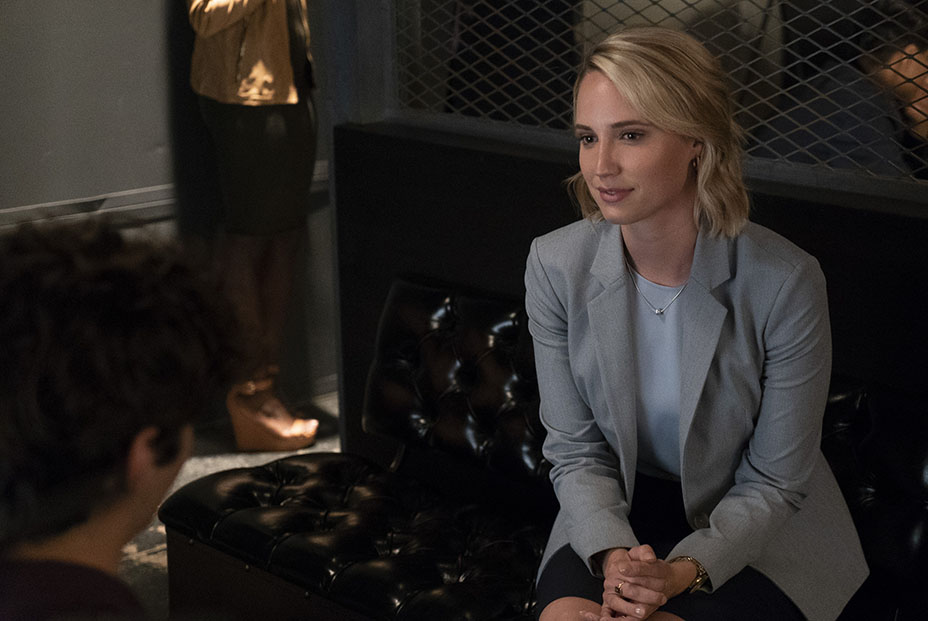 “That is so antithetical to her nature, to who we know her to be — the fighter that she’s always been, even to her own detriment — that of course we had to put a case in front of her that was dynamic, and charged, and going to trigger all of her activist urges and see how she’s going to handle it,” Paige said. “You still don’t know how she’s going to handle it, because there’s a lot coming on that thread that’s really amazing. I think a lot of people don’t realize how ‘and justice for all’ really only means ‘and justice for white people,’ and particularly ‘and justice for rich white people.’ We’re having this reckoning as a culture, and that has to be reflected in our storytelling, so we wanted to make sure that young people — who honestly are a lot more connected to this than my generation was — but we wanted to make sure that it was front and center, and that, again, there was a human connection to it.”

While Callie is trying to figure out how to effect change within the legal system, Coterie resident Malika (Zuri Adele) is working outside of it.

“Being an activist is an incredibly challenging and difficult thing. At this moment in time, where we have pulled the cover back on the intrinsic racism in this country, standing forward is a vulnerable thing to do, and sometimes has really dangerous consequences,” Paige said. “For this young woman who has chosen this path to make sure that black lives are not forgotten it’s of course going to be a dynamic, sometimes traumatizing, sometimes thrilling, sometimes enraging journey. Malika’s working outside the system. That’s where Callie usually is positioned. She’s now inside the system. Can she make that work for her, and is that a powerful way to effect change or not?”

Other episodes in the final stretch of the series’ first season — it was renewed for season two in early February — will see the return of Jazmin (Hailie Sahar), the sister of Coterie resident Gael (Tommy Martinez). She’s struggling to stay afloat personally and professionally, and is leaning on her brother for some major support. 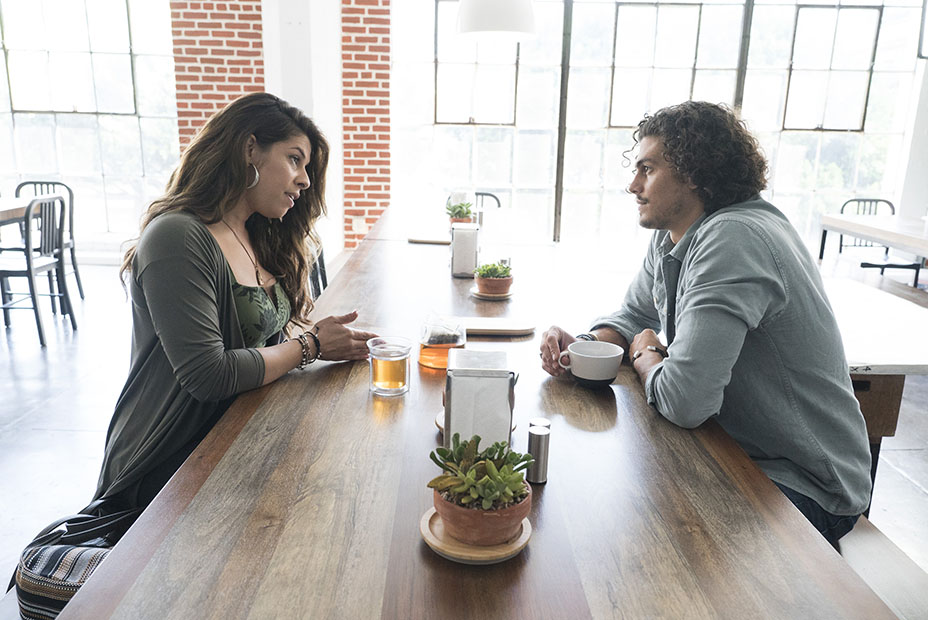 “Gael’s sister is trans, and there’s a big mess of personal baggage that comes with that, and there’s also some professional baggage that comes with that for her. She’s having a really hard time keeping a job, and she is dependent on Gael for some financial support. She’s also frustrated with Gael because her parents have taken a pretty harsh view of her transition, and she feels like he’s trying to play both sides. We’re looking at all of those challenges, and what it means to be a real ally to someone you love.”

As with the rest of the season’s storylines, the most important factor in the series is that they’re taking young adults seriously.

“I thought I knew everything when I was that age, and there was no way to teach me something by talking down to me,” Paige said. “If you talked to me as an equal, you had a shot, but if you told me, ‘Here’s what I know better than you,’ you were getting a big ‘fuck you’ in my head, even if I was sitting there politely smiling. That was the truth on The Fosters. We made a pact that we did not want to talk down to people way back then, and now that we have permission to kind of do anything, we’re certainly not going to start now.”