Welcome to The Hollywood Reporter‘s weekly DC TV Watch, a rundown of all things DC Comics on TV. Every Friday, we round up the major twists, epic fights, new mysteries and anything else that goes down on The CW’s Arrow, The Flash, Legends of Tomorrow, Supergirl and Black Lightning and Fox’s Gotham. While all the DC TV shows are gearing up for their fall returns, THR breaks down the latest teasers and castings.

4 shows and a wedding | THR got it right: the big four-show crossover this Fall between Arrow, The Flash, Supergirl and Legends of Tomorrow will be about Barry (Grant Gustin) and Iris’ (Candice Patton) wedding. Production on the massive event began today, and The CW and Warner Bros. TV released new information including a special comic book cover to celebrate. The crossover, called “Crisis on Earth-X,” takes places because all of the heroes come to town to celebrate Barry and Iris’s wedding, as “villains from Earth-X crash the festivities with a deadly agenda.” Legendary comic artist Phil Jimenez was commissioned to create the commemorative cover, which holds more than one easter egg about what fans can expect from the heroes v. villains team-up. First, it’s interesting to note that Killer Frost (Danielle Panabaker) is seemingly fighting on the heroes side, meaning that there’s hope that her metahuman status doesn’t mean she has to be a villain. And THR has confirmed that CW Seed’s upcoming gay superhero Ray Terrill aka The Ray (voiced and played by Quantico‘s Russell Tovey) is also featured among the heroes, so the animated character will be making the jump to live-action just like Vixen did.

Check out the comic book cover below: 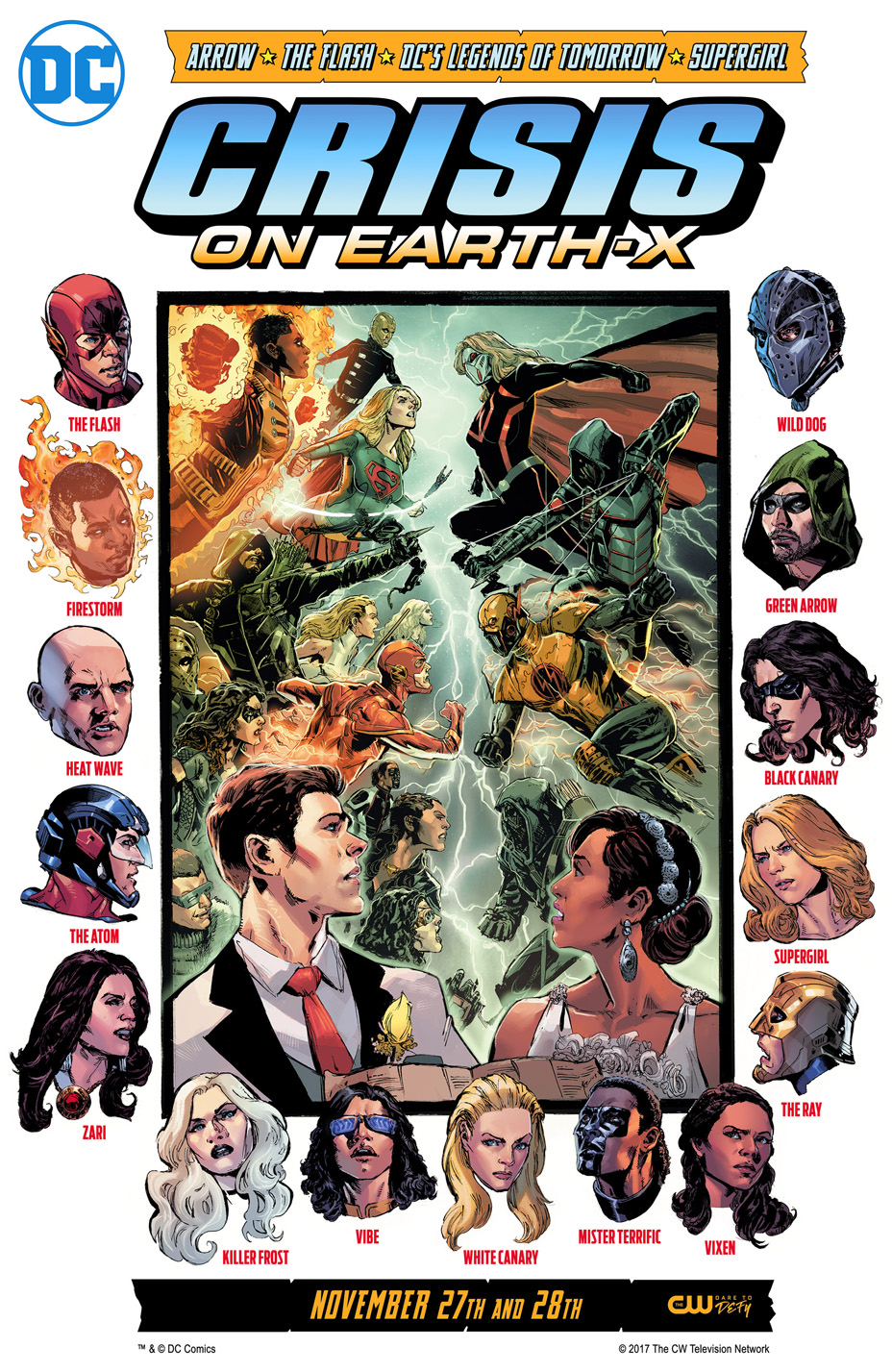 Someone came to party | Who would have thought that Victor Zsasz (Anthony Carrigan) would become one of the best characters on Gotham practically overnight? The bald assassin was always fun to watch when it came to action scenes, but in the opening of the season four premiere, he stole the show just with his attitude alone. Both the writing and Carrigan’s acting have elevated Zsasz to fan-favorite, and the new season has only just started. “Best wedding ever,” indeed.

Rough landing | While Bruce (David Mazouz) is learning how to defend the city while wearing a black mask and cowl, he still has a few things to learn. Namely, don’t lean on a glass skylight while burglars are right below you. Not only did he have a nasty fall, the burglars bolted and when the GCPD arrived to arrest whoever broke in, all they found was a terrified and bloody Bruce. That’s going to be a tough one to explain. It’s good to see that Bruce isn’t all of a sudden Batman. He needs to stumble for a (long) while until he is believably the adult caped crusader from the comics.

Fear personified | Jonathan Crane’s son (Charlie Tahan) is carrying on the tradition of bringing real fear to Gotham, but this time, he was under duress by a gang wanting to throw Penguin’s (Robin Lord Taylor) official “licensed crime” in his face. They locked the terrified boy in with a scarecrow (his own worst fear) until Jonathan became the scarecrow and broke out using the fear serum his father perfected. Now, driven insane by his own fear, he has the power to bring all of Gotham to its knees. The potential for chaos and destruction is truly terrifying. Thank goodness Jim Gordon (Ben McKenzie) isn’t rolling over and letting Penguin run the city. If anyone can find and catch Crane, it’s him. And it’s interesting to note that this incarnation of the Scarecrow is much closer to the comic book version, despite it being Dr. Jonathan Crane’s son and not the professor himself. Gotham is no longer just dealing in proto-villains.

DC TV Watch: A Deep Dive Into the New Trailers for The CW Favorites

Time to mourn | The Flash ended season three with Barry (Grant Gustin) walking straight into the Speed Force with a smile on his face as he accepted his fate. But his fellow Team Flash members won’t be as accepting of his absence as he was. The new extended season four trailer reveals that Iris (Candice Patton) at first struggles with losing Barry, until she does as he asked and looks forward. But protecting Central City with only Kid Flash aka Wally (Keiynan Lonsdale) and Vibe aka Cisco (Carlos Valdes) won’t be easy, and Cisco leads the charge in trying to get Barry back, despite Iris’ refusals. When Cisco finally does succeed in bringing Barry back (although in what shape?), will Iris regret not trying harder to save him?

Check out the new trailer below:

Caitlin Frost? Killer Caitlin? | After helping Savitar, Caitlin Snow (Danielle Panabaker) aka Killer Frost went off on a journey to find herself by the time season three ended. When season four begins, will she be Killer Frost, or a combination of her past and former selves? “We don’t really know what’s happening with Caitlin in season four yet,” Panabaker tells THR. “It’s going to be an interesting journey for her. I had a lot of fun playing Killer Frost last year so hopefully we find some way to keep that spirit alive. This year has been a little bit more challenging for me, there’s been a lot more work so I’m excited to see how that all comes to fruition.”

Easy breakup | Tom Felton is no longer a series regular on The Flash, meaning that Julian is no longer with Caitlin. But she won’t be mourning his absence. “Caitlin has had some serious romances in the past, particularly her romance with Ronnie that really meant a lot to her,” Panabaker says. “I don’t know that her romance or whatever it was with Julian had that much time to develop before she was overtaken by her Killer Frost powers. I’m not sure how much she will feel his loss. I would like to see her stay single for a while. She’s been ready to mingle for a little bit too long.”

What do you think of all the shocking twists and reveals from the DC Comics series? Let us know your thoughts in the comments section below.