On Thursday, Feb. 28, Grey’s Anatomy officially surpasses ER as the longest-running medical drama on primetime television with a whopping 332 episodes.

“That’s got to stop,” George Clooney joked to The Hollywood Reporter following a Television Critics Association winter press tour panel for the star’s latest project, Hulu limited series Catch-22, in which he stars and executive produces. “We’ve got to go back and do some more!”

When asked about the record, star Noah Wyle joked that hearing the news about Grey’s record-breaking achievement makes him acutely feel the passage of time.

The actor, who played surgeon John Carter for more than a decade, has reflected on ER‘s legacy quite a bit in the past year. First, because of the former NBC drama’s surge in popularity thanks to its streaming deal on Hulu. Second, because he spent several months in the city shooting his new CBS limited series, The Red Line. And third, because while he was there, he was able to spend some significant time in the city with his friend and former ER co-star Eriq La Salle, who is an executive producer on Dick Wolf’s Chicago P.D. (which also films in the Windy City).

“[La Salle] and I got to run around the city like we haven’t done in a quarter of a century and really spend good time together again,” Wyle told reporters after The Red Line‘s TCA panel. “And while we were together through this, the show went up on Hulu and blew up. The 25th anniversary came around [in September]. We suddenly got to open up those memory banks that neither of us open up very often, and it was really great. Similarly, I was recently on the Warner Bros. [in Burbank] lot for the first time in ages doing some looping. I got there early and was walking around the backlot and saw the L track. That place is rife with memories: ‘There’s where I killed the rapist!’ The whole place is haunted, in a wonderful way.” 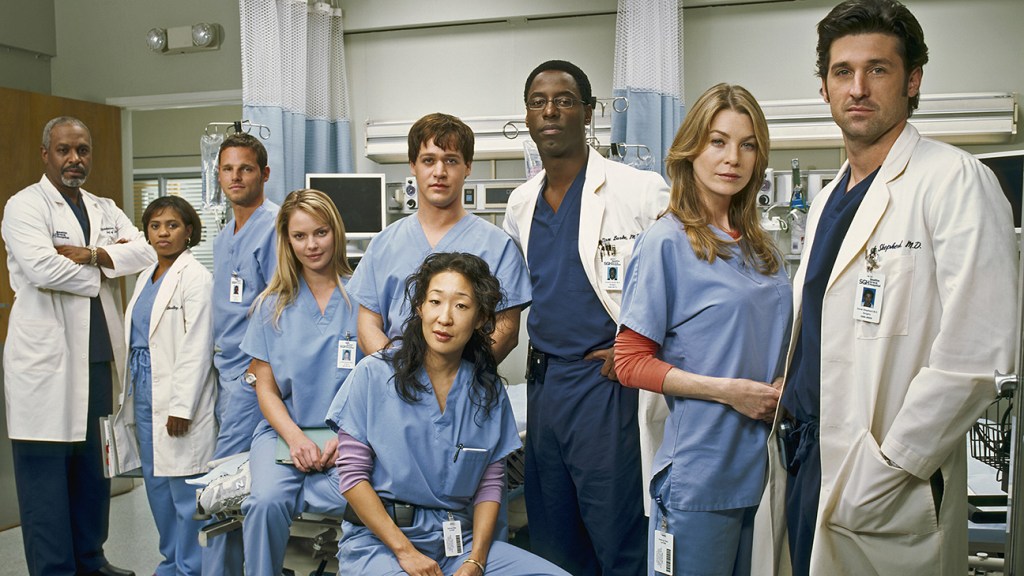 Throughout the course of its 15 seasons, ABC’s Grey’s Anatomy has broken ground in many ways — particularly in its racially diverse casting and female-forward storylines. But ER, in addition to establishing many of the now-familiar beats of nearly every primetime medical drama, also tackled issues that weren’t necessarily at the forefront on television at the time.

“Eriq and I talked about this: Our relationship on ER was such a groundbreaking one in a lot of ways because the power dynamic was completely reversed,” Wyle told reporters. “This young, white doctor was killing himself for the approval and affirmation of a black surgeon. And that was the only opinion that mattered to him. That was novel. And we knew that was novel when we were doing it.”

“After being on ER I can’t watch a medical show,” she told The Hollywood Reporter. “I wish [Grey’s Anatomy] all the best!”

But she did reflect on the changing landscape of television — shorter seasons, anthologies, event series — that means Grey’s could be one of the last shows to hit such a massive milestone.

“I really loved being on ER, and I loved being on The Good Wife. But to constantly come up with new ideas for the same role over and over again, year in and year out, can get really challenging,” Margulies told THR. “I love the format of a six-episode in and out. Not only do you really get to explore the character, but then you can put it to bed and walk away and do something else.”

'Grey's Anatomy' Stars on the Show's Legacy (and Favorite Couples)

Margulies, who next stars in National Geographic’s upcoming event series The Hot Zone about the arrival of the Ebola virus on U.S. soil in 1989, told THR that she’s thrilled about the evolution of the medium.

“Just seeing movie stars flocking to television is so heartwarming to me. I remember I was at an event with Reese Witherspoon last year right after [Big Little Lies] won all these awards. I said, ‘Welcome to my world.’ And she said, ‘I had no idea it could be this great.’ And I said, ‘It is for women!’ And I’ve always said that. You get to play strong characters as a woman on television. You just do. And it’s not just women flocking to television, it’s men too. I mean it’s everywhere.”

Margulies continued, “The platform’s changed so much. The spectrum is so far and wide that there’s room for everybody and I think that’s a really heartening thing to see. I know that especially as a parent and a busy person I don’t have a lot of time to see anything outside of my home, so it’s it’s so lovely to say, ‘Hey, what’s on Netflix? What’s on Apple? What’s on Amazon?’ And [it’s great to] be able to dive in and and watch these great 10-episode, eight-episode shows that you can see and then you’re on to the next one.”

Then again, the current trend of TV reboots and revivals could mean many fan-favorite TV stars will end up reprising their roles in the future. But would any of ER‘s biggest stars — Clooney, Margulies, Wyle — be interested in bringing their series back for more? Clooney’s potentially in — just don’t expect to see Doug Ross back in scrubs.

“Do you think that’s a good idea?” he asked a reporter who broached the topic of a revival. “I’d play a patient now!”