[This story contains spoilers from the April 1 “Breathe” episode of Grey’s Anatomy.]

Viewers knew that Chyler Leigh would be returning to reprise her role as Meredith’s younger half-sister, Lexie Grey, but she wasn’t the only former star who came back on the show’s magical beach. Eric Dane, in a surprise appearance, returned to reprise his role as Lexie’s onscreen love interest, Mark Sloan.

Dane and Leigh appeared together on the beach as part of a central storyline in which Meredith (Ellen Pompeo) continues to battle COVID-19. Dane and Leigh become the latest former stars to return to Grey’s Anatomy this season, joining Patrick Dempsey (Derek) and T.R. Knight (George) as the Shonda Rhimes-produced ABC drama continues to focus on the impact of the pandemic on the medical community.

Dane and Leigh’s Mark and Lexie appeared for the first time since the season eight finale. That episode featured Lexie telling Mark that they were meant to be as she died from injuries sustained in a plane crash. Mark, meanwhile, was killed off in the season nine premiere as Dane left the series to pursue TNT’s The Last Ship.

Below, Dane talks with The Hollywood Reporter about providing closure to Mark and Lexie’s love story, being part of Meredith’s big storyline — she’s now off the vent and breathing on her own — and why his reunion with Leigh had to be filmed via greenscreen. 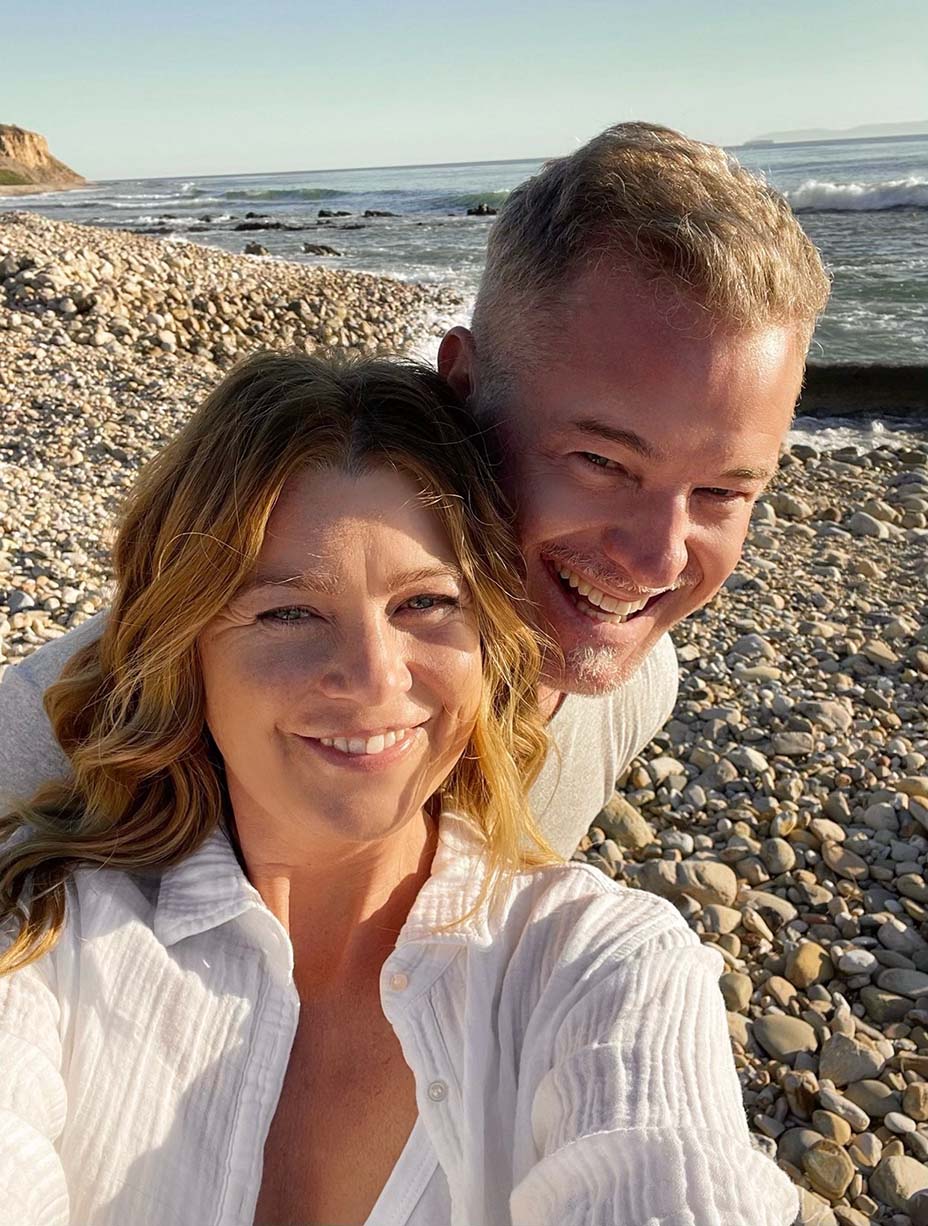 What was the pitch to come back? Had you seen that Patrick Dempsey had come back and wondered if you were going to get a call?

No, I hadn’t. I was in Shanghai, when Krista Vernoff reached out and said, “I have an idea.” She texted me. I said, “Well, I’m in Shanghai, of all places. And I’d love to hear your idea. Give me a couple weeks to clear quarantine and I’ll find you.” And she says, “How would you feel about coming back? I don’t know if you’ve seen what’s going on, but Meredith is in this coma in a fever dream from COVID. And she’s seeing all her friends on a beach.” And I said, “Well, that kind of makes sense. Yeah, sure, let’s do it.”

Was the pitch for both you and Chyler to return the same episode?

What was it like reuniting with Chyler after all these years?

It feels like I never left. It was very comfortable and very easy, and it was so nice to see a lot of the same faces with the crew. It’s a role that always fit for me, like one of those great old T-shirts. And it was just like putting the T-shirt back on and hanging out on a beach for a couple days, and catching up with some old friends.

Did you actually film with Chyler? She’s a regular on a show that films in Vancouver, which would have meant she had to quarantine in the middle of Supergirl production to film this.

Chyler was in Vancouver. So we had to work some magic. Chyler could get here but then she couldn’t get back to Canada. There was some greenscreen. There was a lot of me and Ellen.

Were you bummed that the logistics didn’t work out for you and Chyler to physically share a scene together again after so long?

What did you and Ellen talk about between takes?

We talked about kids — my 11-year-old just found Grey’s Anatomy and she’s asking me a lot of questions, which are difficult to answer. We talked a lot about our kids finding this show, and how do we handle that. How do we police what they’re able to watch? Are they of age? Is it appropriate? Some of it raises some questions that I’m not quite ready to answer yet. But I don’t mind it because both my kids now want to be surgeons. And all their baby dolls they used to play with are now being cut open, and they’re stitching up bananas. It’s fun.

Onscreen, the episode implies that Mark and Lexie wound up together in whatever this special beach is. Shonda Rhimes said back in season nine that killing off Mark was the only way for Mark and Lexie to really be together. In Lexie’s last dying words, do you think Mark and Lexie were meant to be?

Does this feel like you have closure with this character again? Did it feel like there was any lingering questions that you were really able to put a bow on this time?

I think it all came full circle. The one question I think that everybody was left with was, obviously, Mark Sloan saying goodbye to Lexie and she said, “We’re meant to be.” And then Mark passes on, and we don’t know what that meant. And now we know, Mark and Lexie are together in their parallel universe.

As an actor, do you feel like this is the closure that you maybe didn’t quite get the first time?

Yeah. I always felt like there was closure. I’ve always trusted these writers and what they were doing as far as the overall story and the character’s departures. They’ve always handled that really well. I guess the only people that weren’t provided with closure was the audience. And I hope that this can do that for them.

Even though you didn’t film in the same place, it really does feel that way.

Two-thousand miles of distance between us is not going to affect the chemistry that happens onscreen between us. I know who I’m talking to, she knows who she’s talking to. And that translates.

Mark spoke about always looking out for Callie (Sara Ramirez) and Arizona (Jessica Capshaw) and their daughter, Sofia. That felt like something special to be part of, too.

I can identify with that. I lost my father at a pretty early age and I always felt like he was looking out for me — still to this day, to a degree. So those words meant something to me, and I believe in them.

'Grey's Anatomy' Boss Explains the Decision to Give Meredith COVID-19

Ultimately, Mark and Lexie help Meredith fight to stay alive in her battle with COVID. What does it mean to you to have been able to not only come back, but to do so in such a meaningful way?

It’s a pretty poignant moment. I would think anybody speaking to anybody beyond the grave would probably provide the same advice. You get one lap in life, it’s very important that you live every day to the fullest. You keep both feet in today, you stay present. And you’re there for your loved ones.

Any regrets about not being able to reunite with Patrick Dempsey to bring McSteamy and McDreamy back together?

No. I love Patty. That wasn’t the story. There were no regrets. I’ve never had regrets about anything on the show.

You said in a 2013 interview that you would have stayed on Grey’s until the last episode but ultimately left because you couldn’t pass up the role in The Last Ship. Looking back, any regrets about asking to leave?

No regrets. Look, Grey’s Anatomy is a fantastic show and it provides a fantastic life. I’m an actor; I think it’s very unnatural for any actor to play the same character for eight years. It’s just counterintuitive to what I think I’m doing for a living and what my purpose is with my job. So, as much as I loved being there, and as much as I loved working with the people I was working with, playing Mark Sloan for 17 seasons just seemed like, I don’t know, a little antithetical to what I’m supposed to be doing as an artist. And you get to a point where that’s all anybody is going to see you as. And even with The Last Ship, I wasn’t playing Mark Sloan, but I was playing a guy that certainly looked like Mark Sloan and had some of the same characteristics. And then I took a year off and said I need to mix things up here because I’m not finding any real joy in the work I’m doing. And then Euphoria came along and was very different and something I’ve never done. And it’s going to challenge me and keep me engaged. And nobody is going to expect this out of me, so let’s do it.

What’s the status of season two?

Season two is going to be fantastic. I don’t think principal photography has started yet, but I know we are prepping right now. I think mid-April we start shooting.

Is the plan still to get the show back on the air this year?

I believe so. We do take a long time filming it. And it’s a gift to get that much time to shoot an hour of television. We take 30 days to shoot an episode sometimes, which is unheard of. When we were shooting Grey’s in the early days, the 10-day episodes that we would get were unheard of. But 10 days and two units, people were like, “Wow, that’s a luxury.”

So to return to Grey’s and get to spend a few days on the beach and not on set and in scrubs under the gun like the old days must have been a nice final memory of the show.

It was a great couple days on the beach with some old friends.