Meredith Grey begins her voiceover with the words people with cancer hear the most, fear the most, hate the most. Myself included. As a person who has been living with a rare form of bone cancer, Chondrosarcoma, for over six years, I’ve yet to understand what “winning” looks like, what “losing” looks like. Days after I mentioned this in the writers’ room, showrunner Krista Vernoff asked me how I’d feel about writing a storyline that mirrored my own.

My initial reaction was to say no.

Until I looked around the writers’ room and realized I was the only person who identified as a person with a disability. And then I thought about the other writers’ rooms across town and how few of them had a person with disability on staff. I thought of the younger staff writers I met along the way who were advised by more senior writers not to disclose their disability for fear it would make them “not a good hire.” I thought of the young woman of color I met at an industry event whose agent told her: “The fact that you’re African-American is a plus, but a disability … they may doubt you can get the job done. Try not to talk about it.” And I thought about the dozens of speeches I’ve heard at Hollywood events, the dozens of “think pieces” I’ve read over the past five years or so about inclusion — and recalled how “ability” is the last to be mentioned, if it’s mentioned at all. (It’s usually not.)

And I thought about how many episodes of television I consumed since I was diagnosed with cancer (an embarrassing amount) and how often I’m irritated by the militant language used with cancer (battle, fight, win, lose) — how often cancer is looked at as a binary state: Dead. Or Cured.

Scientists around the world are finding new ways to keep people with metastatic cancer alive — not by curing it, but managing it long-term. (Think diabetics on insulin.) I am one of those people. I may live with cancer the rest of my life. Because it’s a chronic condition, I identify as a person with a disability. I have a full life of work and friendship and love and travel and failure and joy. But I’ve never seen that version of cancer, that version of ability on television.

I recognized Krista was giving me that chance. And if I didn’t take her up on that, who would?

And so, in Thursday’s episode, two beloved characters are faced with cancer. Catherine Fox (Debbie Allen) is preparing both mentally and physically for a surgery she’s told could cure her, destroy her surgical career or kill her. Her surgeons, Shepherd (Caterina Scorsone) and Koracick (Greg Germann), are determined to remove her cancer completely. They don’t. They remove 95 percent of the tumor. She’ll have cancer for the rest of her life. On most television shows, medical or not, that would be cause for disappointment, rage, a character drowning their sorrows in a quarter of scotch. But in this episode, Catherine chooses to celebrate. She’s grateful to be alive, and convinces her surgeons they pulled off a miracle. And that’s how I feel every damn day. I’m thrown in MRI machines regularly and I sing “Sloop John B.” to keep myself calm the way Catherine sang “Ain’t No Mountain High Enough” — and then I go to work. And Catherine will, too.

Meredith’s father, Thatcher (Jeff Perry), is not as lucky. He was diagnosed with AML (acute myeloid leukemia) and is now in hospice care. He’s forgone more treatment, without judgment or apology. And Meredith finally visits him on what becomes his last day.

As a longtime fan of the show, I wanted to see Thatcher one last time. I wanted them to find closure, or at least the tiniest bit of grace. I also wanted to see a version of cancer where someone didn’t have to carry anyone’s burden of “fighting to the end.” He died as comfortably as possible, in the comfort of his own home.

When breaking the episode in the writers’ room, words like “win” and “battle” and “brave” and “cowardly” would pop up occasionally as we discussed Thatcher’s choice to stop treatment or Catherine’s decision to not disclose her illness. Someone wondered aloud if Catherine’s story might give cancer patients false hope, since my case was so rare. Our writers’ room is made of professional empaths — big-hearted, brilliant, thoughtful human beings from all backgrounds. The fact that those questions still came up made it clear how deeply ingrained in our DNA these value judgments are toward people with cancer. And it became even clearer why this story was so necessary to tell. 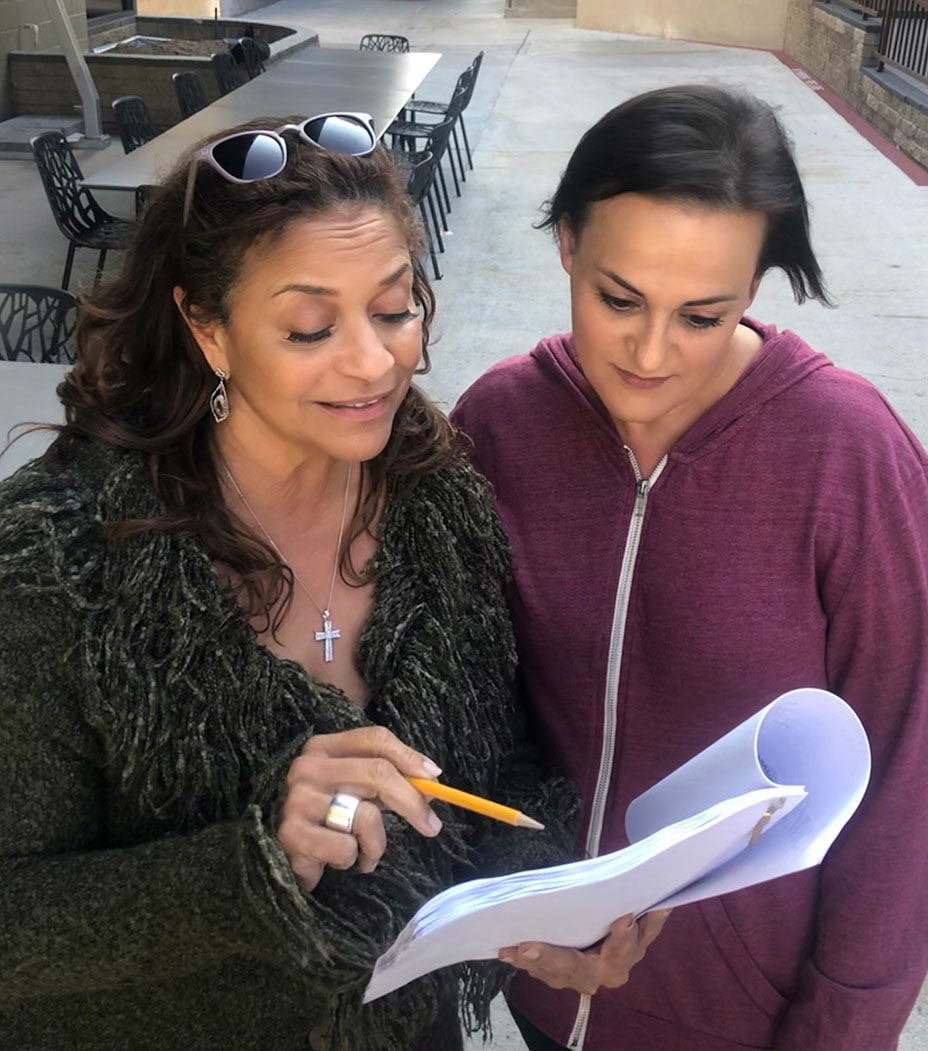 Writing the episode, cooped up in my office, was one thing — but watching a version of my story played out in front of me presented its own set of challenges. Krista fiercely guarded the script, more so than any showrunner I’ve ever seen. The actors and crew on set were incredibly present, all of them all-too-aware how closely Catherine’s story mirrored my own. (In the past five years, they’ve seen every version of me from chemo-scarf to buzz cut to that one day my left arm decided to stop behaving like an actual arm — and never once doubted my ability to do my job.) And Debbie Allen is so extraordinary and such a singular talent, it was initially easy to separate myself from Catherine. Our worlds look nothing alike, in work, in love, in family. And, yet, being on set filled me with more anxiety than I ever could’ve anticipated.

On one of the last days of shooting, I watched Debbie wake from surgery, listing everything she’ll still get to experience because they saved her life. They didn’t cure her, but they saved her. I heard it over and over again, watched every actor take that in. And I lost my damn mind. I waited until the take was over and ran to Krista’s office, tears streaming down my face.

I thought I was going crazy. She thought something had gone terribly wrong. Neither was true.

For the first time, I saw my story reflected back at me. I saw a version of ability, a version of cancer that looked like mine, like my other friends living with cancer.

It’s something every human being should experience. Not the tears and the losing your damn mind part — but the feeling of being seen, understood, believed. But that only happens when we broaden the stories we tell on screen — and the people who get to tell them.

Elisabeth R. Finch is a co-executive producer of ABC’s Grey’s Anatomy and wrote Thursday’s episode (as well as this guest column about how women have the power to create change.