Continue to The Hollywood Reporter SKIP AD
You will be redirected back to your article in seconds
Skip to main content
September 27, 2018 7:00pm
Logo text

[This story contains spoilers from the season 15 premiere of ABC’s Grey’s Anatomy.]

ABC’s Grey’s Anatomy returned for its 15th season with an eventful two-hour premiere Thursday that set the stage for what to expect from what showrunner Krista Vernoff is calling the “Season of Love.”

In short: Meredith (Ellen Pompeo) confessed she’s ready to find love again (and no, not a rebound). Owen (Kevin McKidd), Amelia (Caterina Scorsone) and Teddy (returning series regular Kim Raver) have one of the show’s most complicated love triangles ever. Jackson (Jesse Williams) is having his own crisis of faith following former flame April’s (Sarah Drew) departure. Maggie (Kelly McCreary) is officially in love with Jackson — holding Teddy’s secret that could complicate the life of her pseudo-sister. Richard (James Pickens Jr.) is struggling without his sponsor. Bailey (Chandra Wilson) is finding a new balance in her life, which includes re-hiring Alex (Justin Chambers) as interim chief and poaching Jo (Camilla Luddington) for her own potential career gains. Then there’s DeLuca (Giacomo Gianniotti), who after saving Jackson and Maggie’s lives, is grabbing his own life by the horns.

Below, Vernoff — currently directing her first episode — talks with The Hollywood Reporter about where the inspiration for the season of love came from, the Shonda Rhimes-produced drama’s longevity and the LGBT storylines to come after Arizona’s (Jessica Capshaw) departure.

Where did the decision to do a “season of love” come from?

I’m pretty sure it came from the Stoneman Douglas theater department kids singing “Seasons of Love” [from Rent] at the Tony Awards. Our writers’ room is full of giant musical theater nerds and activists. That was a magical combination of music and activism at the Tony Awards. We all sat at home weeping though it, and then we came to the writers’ room the next day and talked about it at length. The song was going through my head all day. Meanwhile, we were breaking a less-than-uplifting story for the season premiere, and at some point I just got up and erased it and wrote “Season of Love” on the board. Exec producer Zoanne Clack had pitched a matchmaker who comes in as a patient and we had it on the board for the second half of the season. I  moved it to the season premiere and boom, Season of Love.

Why do that now?

The world has gone so dark that we all need a little light and relief in our entertainment, and nothing spells relief like a playful, happy, open-to-love Meredith Grey. And because our country has become so fractured, we need common ground. And the one thing that almost all of us have in common is an affinity for the possibility of falling in love. But most importantly, in my heart I felt that Meredith was really ready — and Ellen was game.

Will there be a wedding this season?

There were three weddings in last season’s finale! That said, I still have some blank spaces on the story board for the second half of the season, so never say never.

Ellen Pompeo’s contract is up next season and she recently indicated that season 16 could be the end for her, which would mean the end of the show since Shonda Rhimes has always said that there is no Grey’s without her. What conversations have you heard about a potential endgame?

Given Ellen’s comments and that the two-hour premiere ends with her admission that she is ready to find love again, is this the beginning of telling the end of her story?

I won’t begin to tell the end of Meredith’s story until Shonda, Ellen and ABC all sit me down together and say, “No, for real, this is it!”

How will Meredith dating be different now than it was originally? How has that evolved or changed?

Meredith didn’t really date originally. She fell in love with McDreamy (Patrick Dempsey). And for a little while there when he turned out to be married to someone else [Addison, played by Kate Walsh], there was some sleeping around by way of comfort and there was McVet (Chris O’Donnell). And then she was with Derek and then she was married and having kids, and then suddenly and painfully, she became a widow. Then, there was a rebound romance or two. Martin Henderson was terrific, but it’s hard for me to think of Riggs as anything but a rebound because of how soon he came in after Derek. And then last season, she focused on work and became something of a medical superhero. Now, she’s really single, she’s past the intense, initial grief. Derek will always be with her — in her heart and in the faces and hearts of their kids — but he’s gone and she’s still here and at the end of the season premiere she’s admitting that she wants more. She’s agreeing with Cece, the matchmaker, that there is no cap on happiness. That she can be happy with her career and her kids but having someone to share it all with might be really nice. And that means putting herself out there in a whole new way. Actually seeking love. That’s brand new. And Ellen Pompeo is showing colors this season that I’ve just never seen from her before, which is seriously impressive after 15 seasons of playing the same character!

With Amelia, Owen and Teddy, how do you keep love triangles interesting and exciting 15 seasons in?

You work really hard in the writers’ room. You make mistakes. You throw stories out at the 11th hour and you try again. And you are greatly benefitted by the extraordinary talents and rich character histories brought by Kevin McKidd, Caterina Scorsone and Kim Raver. That’s really the key. There is so much love and so much history between Owen and each of these women. There’s nothing simple about it. There’s no clear rooting cause. Half of the writers are rooting for one coupling, half for the other. We battle it out just like the fans.

Will you do a love triangle again with Meredith?

You have to watch the season to get an answer to that!

Following April’s departure, Jackson is now exploring his own beliefs. Is that a larger theme for Jackson this season?

You explored a number of topical subjects last season, including a transgender storyline and unconscious bias. What’s in store this season?

We did tackle some topical issues and we landed on all of them via character conversations. Not so much “what issue do we want to tackle” but “what might these characters be going through.” We landed on the unconscious bias story because Zoanne was talking about what it is to be raising her black son in America — how there are different rules that apply to him — and how that would for sure be an issue for Bailey and Ben as they raise Tuck. For this season, we have some beautiful stories emerging about the state of health care in this country — what people can afford and also the different ways that people live with illness. We have an incredible writer, Elisabeth Finch, who lives with cancer and gives us a unique and vivid window into that experience.  With Amelia and Betty, we also have a recovering drug addict raising a recovering drug addict which gives us a window into the opioid epidemic. We approach our story telling through character always, but also in my writers’s room, I often ask the question “what message are we sending with that story?” If we don’t like the answer, we revisit the story.

For the first time in years, Grey’s does not have a series regular character from the LGBT community. How are you approaching those storylines post-Arizona? Will Carina or Casey (Alex Blue Davis) get a new love interest? Is Levi (aka “Glasses”) bisexual? You’re also introducing Dr. Nico Kim, the show’s first gay-male surgeon. Helm?

We have a beautiful coming-out story and romance. It’s our favorite thing at every table read. It’s vivid and exciting and brand new for our show because it focuses on gay men. Alex Landi (seen below) is an exciting addition to the cast, for sure, and you have to watch if you want to know more about that story! In our recurring cast, we also have Jaicy Elliot as Taryn “Hellmouth” Helm, Stefania Spampinato as Carina DeLuca and Alex Blue Davis playing Casey Parker, a proud trans man playing a proud trans man. While Callie Torres (Sara Ramirez) and Arizona Robbins (Jessica Capshaw) are iconic and can never be replaced, our show continues to look like the world at large — which is to say, LGBTQIA people are everywhere. 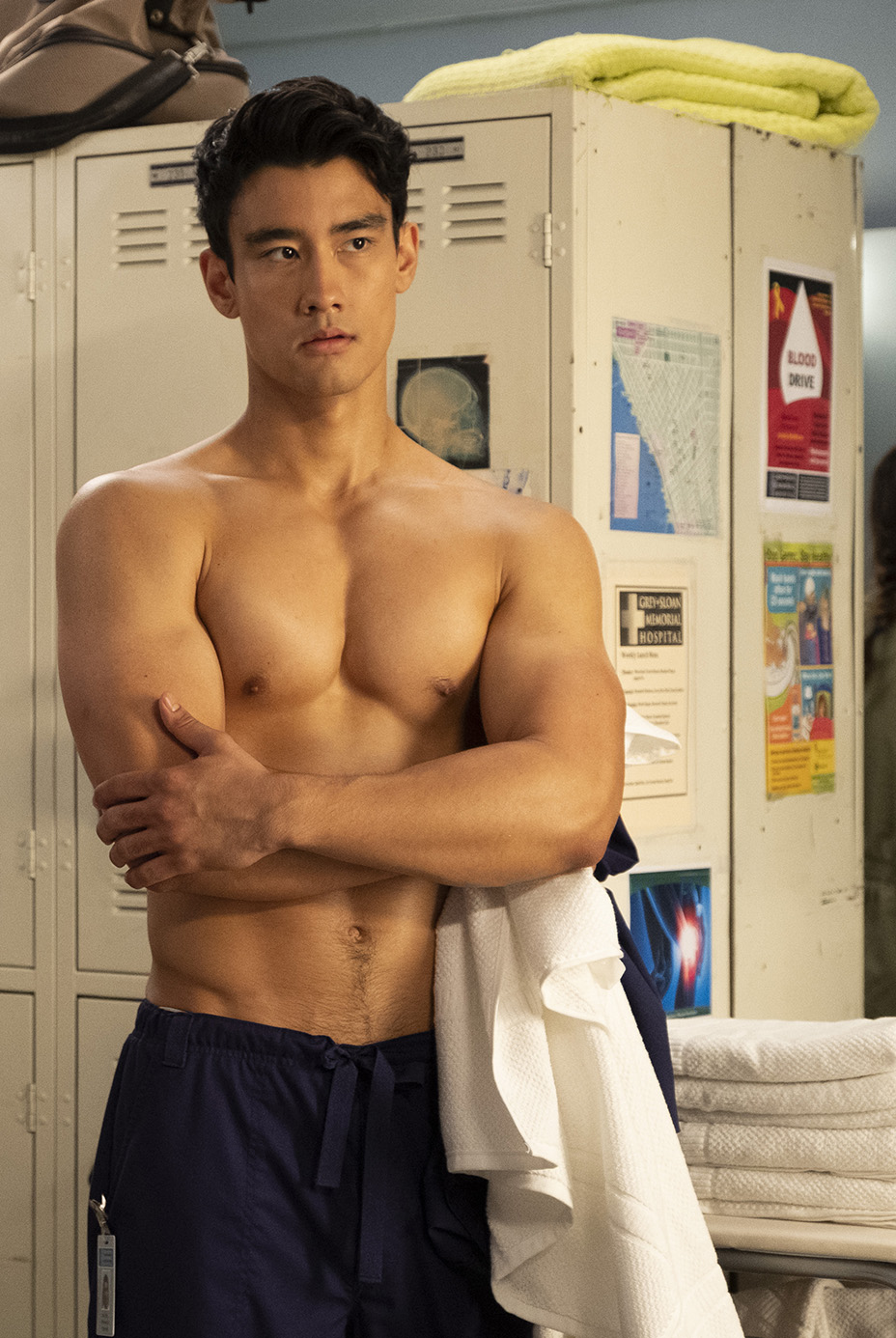 Will there be a death of a series regular this season?

Richard’s (James Pickens Jr.) sponsor died last season, and both Catherine (Debbie Allen) and Bailey (Chandra Wilson) are concerned about him. His lack of a new sponsor may have cost him the interim chief job. He’s last seen going for a ride on DeLuca’s (Giacomo Gianniotti) motorcycle. Since Richard is the beating heart of the hospital, how reckless will he get as his sobriety is tested this season?

Sobriety is threatened when a recovering person disengages from his program. And whether or not he drinks, he’s in danger of becoming what is called a “dry drunk.” When an alcoholic is not drinking but is also not working a spiritual program of recovery, the behavior can be dark and reckless — sometimes worse in terms of mood than if he were actually drinking. A dry drunk is an angry, pained person. Richard is on a slippery slope right now. 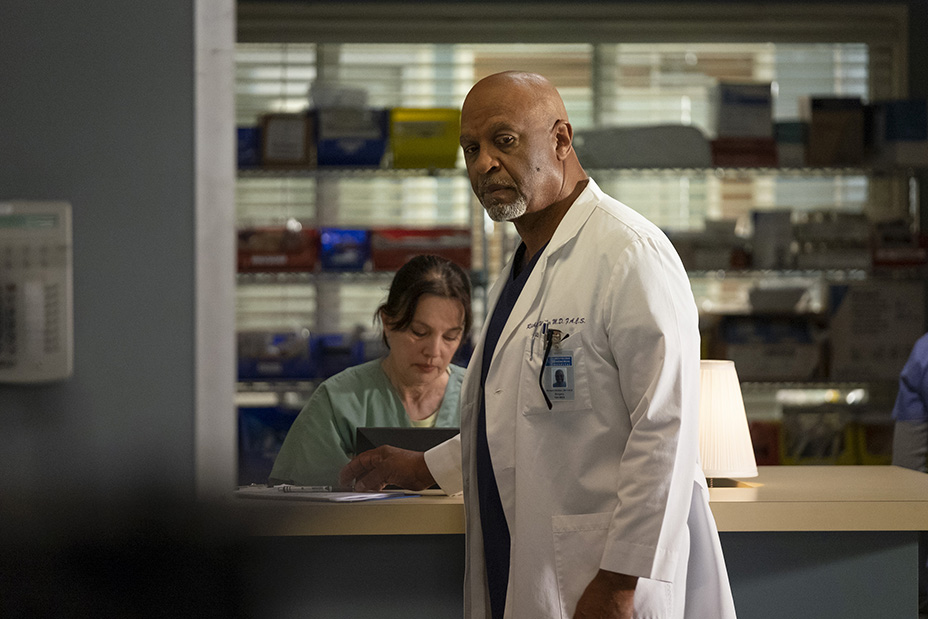 Speaking of interim chief, how will Alex be a different chief than the ones we’ve seen before? How will Alex being a leader shake things up?

It’s delightfully different. Justin Chambers just lights this story up. In many ways, he was the least likely candidate for the job — which is why we loved it so much when we landed on it in the room after days of discussing the various possibilities. It feels entirely different than the chiefs we’ve seen before — and Justin wears the suit well.

Now that Jo (Camilla Luddington) and Meredith aren’t working together, will they now be competing with one another?

Only insofar as everyone on our show is always competing with each other. Meredith and Jo walked through the Paul hell together last year and it bonded them. They are friends. 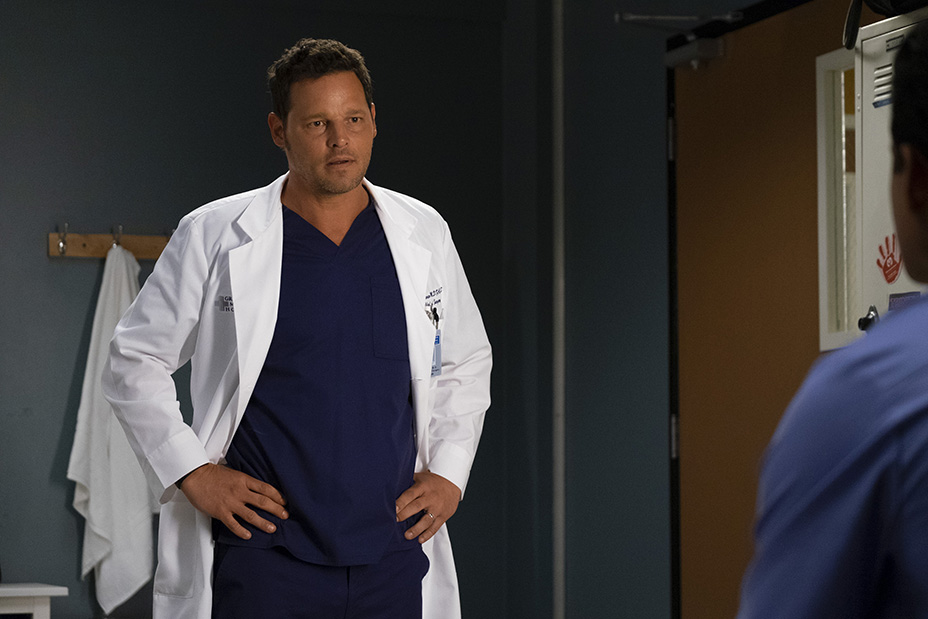 DeLuca has a newfound sense of life. What’s his trajectory?

It’s too fun to spoil.

Link (Chris Carmack) is bringing a new macho doc to the hospital with a stress-free vibe. Is he part of a concerted effort to for a lighter season overall?

Yes. What’s fascinating about Chris Carmack as Link is that he lightens up everyone around him. We were missing the Mark Sloan (Eric Dane) energy on the show. There is only one Mark Sloan and Link is actually very different from Mark, but the lighter energy is what they have in common. And Link comes with some surprises! Stay tuned! 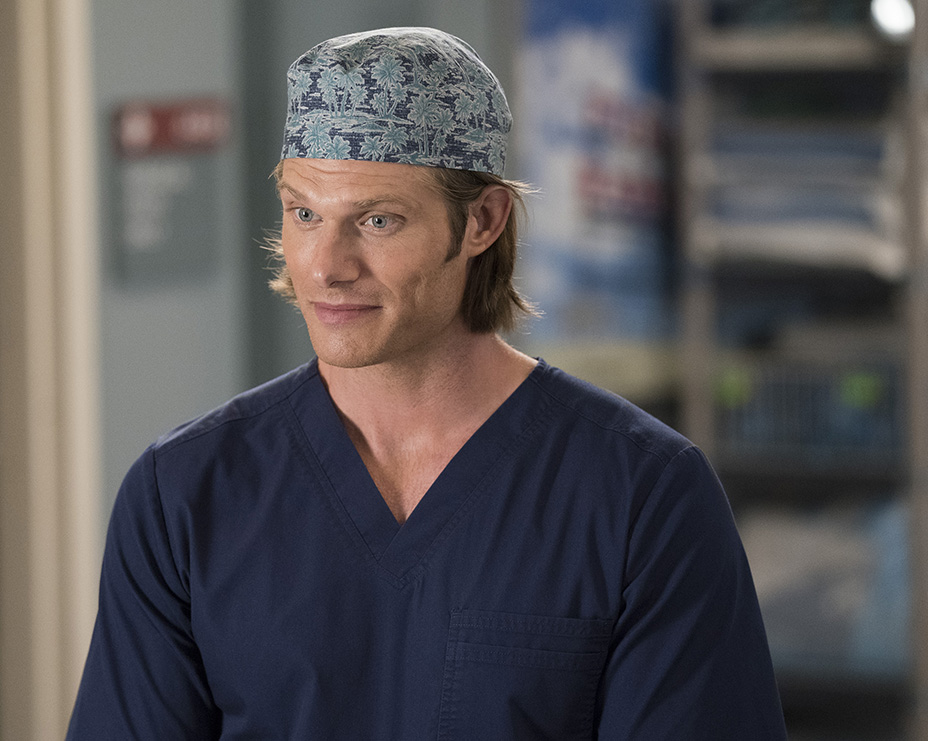 What did you think of the Grey’s Anatomy season 15 premiere? Sound off in the comments, below.