It’s a crisp early February day in Hollywood and Ellen Pompeo has abandoned Meredith’s typical scrubs and style for her own jeans and T-shirt as she pulls double duty on ABC’s Grey’s Anatomy. Welcome to Pompeo’s first time behind the camera: The actress, who has spent 13 seasons performing countless surgeries and perhaps even more soapy scenes in the Shondaland medical drama, is making her directorial debut.

With a portable speaker blaring classic rock from bands like Led Zeppelin and Journey, Pompeo shuttles from behind the camera bank to be closer to her co-stars between takes as she offers further direction on her vision for scenes in what promises to be an emotional hour infused with the humor and banter reminiscent of early-season Grey’s.

Though inspired by executive producer and frequent director Debbie Allen — as well as creator Shonda Rhimes and her Year of Yes book — Pompeo initially balked at the idea that she add director to a résumé that includes development executive and running a production company.

“I have a new baby at home, two other adorable little kids, a husband, three dogs, four chickens and a fish and I told Debbie that I couldn’t possibly be here another minute than I already am,” Pompeo told The Hollywood Reporter during a break from directing at a February set visit. 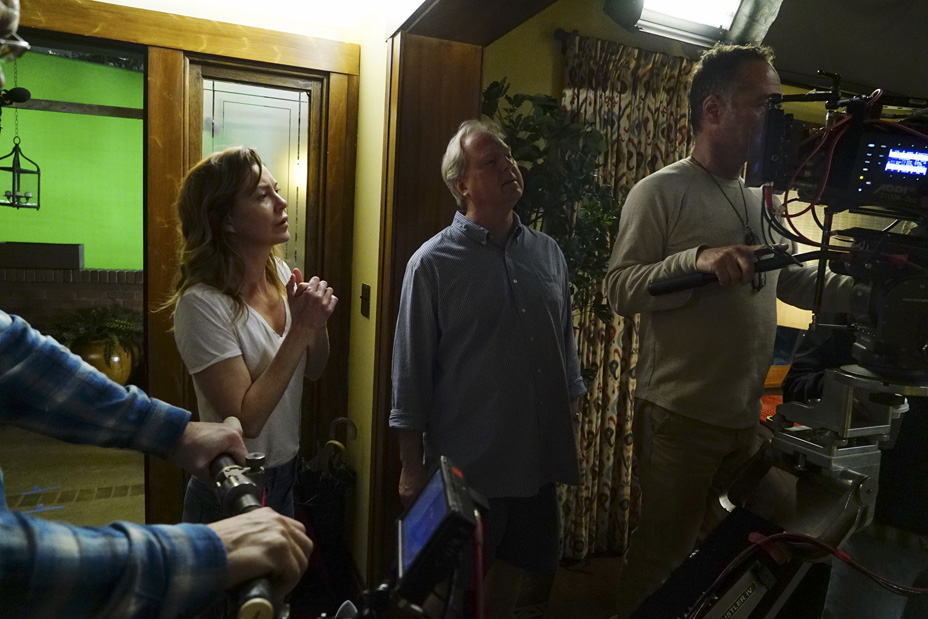 Eventually, it was Allen — who has been directing Grey’s for more than seven years — who convinced Pompeo to change her mind by making a very simple observation.

“In every episode where I’ve worked with her — she’s been in every episode I’ve directed — she’s always had ideas about the story, characters and what she’s doing. These are things that are a director’s concern, especially when it comes to other people,” Allen says, recalling an instance when Pompeo helped a nervous guest star get through a scene. “When I brought Denzel Washington in to direct, that was inspiring for her because she saw how everything pulled together.”

While many actors-turned-helmers tend to shadow other directors on the set — Scandal‘s Darby Stanchfield did the same, as did Grey‘s co-stars Kevin McKidd and Chandra Wilson before they stepped behind the camera — Allen noted that Pompeo had already done as much without even knowing she was doing it. (Pompeo did, however, wind up shadowing McKidd as well as Allen, who was on set to support the star in her new venture.)

“She’s shadowing all the time because she’s here all the time — she sees everything we do and is constantly commenting on things,” Allen says. “The main thing was translating her ideas cinematically and getting the language down. She knows what she sees and it’s just learning the lingo.”

Allen’s comments turned out to be pretty convincing when Pompeo took a moment to step back and consider the work beyond acting that she was already doing on Grey’s.

“I have a very specific vision and I see a lot of things that people miss, so I started thinking about it and it’s hard to say no to Debbie Allen — especially when your boss writes a book titled Year of Yes,” Pompeo says with a laugh. “I just have to try it once and if I don’t like it, I don’t have to do it again.”

That’s when Pompeo got to work blocking scenes and coming up with a vision for “Be Still, My Soul.” While most actors tend to start directing with episodes in which they are not prominently featured, that was not the case for Pompeo. The hour features the return of Maggie’s (Kelly McCreary) mother, Diane Pierce (LaTanya Richardson Jackson), as the latter battles breast cancer. What’s more, Meredith plays a central role in not only the care for Diane, but also support for her half-sister, Maggie, as Pompeo also narrates the episode.

“What’s more surreal to me is that the first episode I’m ever directing is about a mother dying and having lost my mother so young, I don’t believe in accidents,” Pompeo says, noting that it was important for her daughters and other young girls watching to see a good example of a working mother willing to try something new. “There’s a reason this is the subject of my first episode that I’m ever directing; she’s up there shining down on me. This is what she wanted me to do.”

Pompeo credits Allen and director of photography Herb Davis for support during the process and called Grey’s a “great place to learn.” “One of my biggest strengths is admitting what I don’t know. I know a lot here and I’m pretty much an alpha character, but I have no fears about admitting what I don’t know. I don’t know the photography piece or the technical piece — but I know how I want the scene to look,” she says, noting that she asked for Davis’ blessing before directing as she confessed she’d be a little slow on the technical aspects of directing. “To be able to learn from somebody like Herb, who is such a master — his nickname is Rembrandt and he really does paint with light. I feel very lucky to learn the art of photography under his direction.”

How to Get a Job in Shondaland 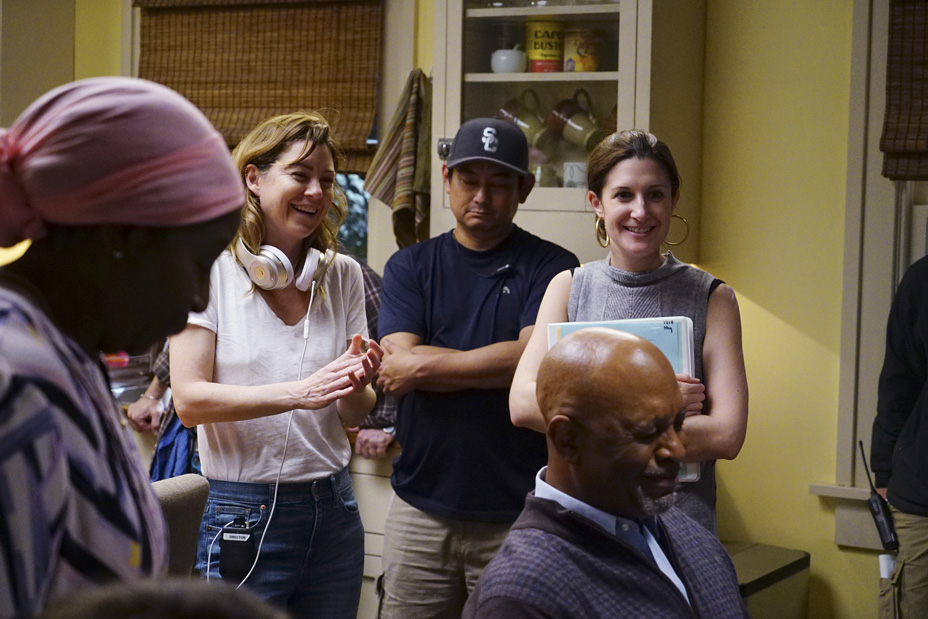 Pompeo also asked to direct an episode penned by longtime Grey’s writer Meg Marinis (who scripted her first hour in season six and has been with Grey’s since) because the duo share the same “vibe.” “When I read her script, I knew exactly how I wanted every scene to look and how I wanted every scene to be played,” Pompeo says. “Being on a series this long, if you don’t have the spirit of wanting to make everything better all the time, then you can’t be here. That’s when you know you’ve stayed too long.”

Directing also helped recharge Pompeo with the series heading into May sweeps and its impressive 14th season next year as ABC’s No. 1 drama. Younger viewers have continued to find the series thanks to Netflix.

“I’ve had seasons where I didn’t think I could do this anymore but then something happens — and Shonda and I discuss [the show’s] evolution a lot — and the change that that brings inspires, invigorates and re-energizes you. That’s what directing is doing for me here,” she says midway through what was nine days of directing the episode. “Bringing in Debbie did that and even as sad as it is to lose characters, the new people that come in, it makes it feel different so it doesn’t feel like the same show anymore to me. The change is precisely what keeps me going and re-energizes me. I’ll absolutely direct again, I’ve been having a ball.” 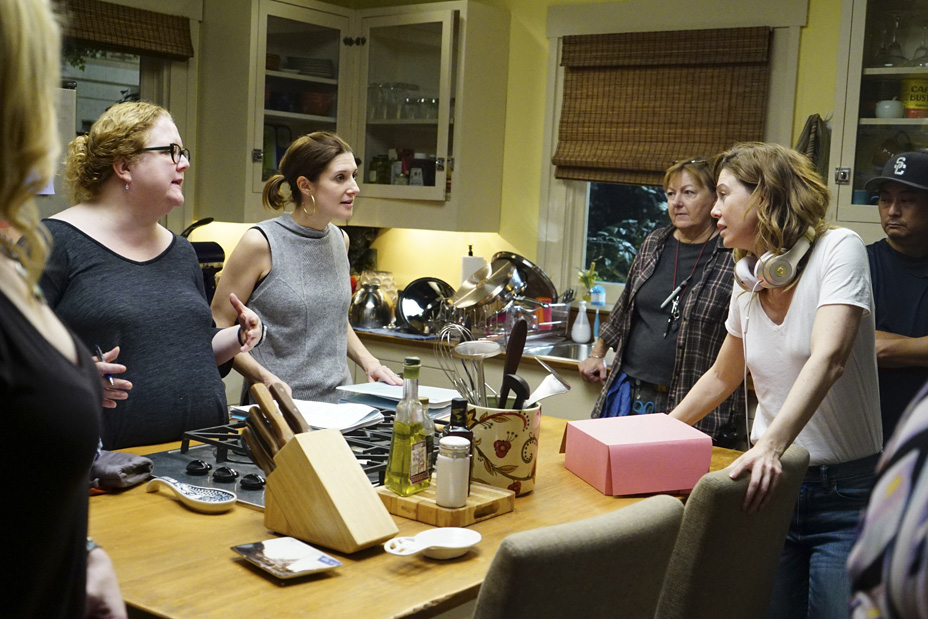 While she would love to branch out to other Shondaland fare — Scandal‘s 80-page scripts make directing that while juggling her commitment to Grey’s impossible — Pompeo would like to try cable and directing a pilot at some point down the road.

“The thing that surprises me the most is how much fun I am having,” Pompeo says. “I didn’t think I would have that much fun. The most fun I have to say is these actors, on the show — they’re amazing. Getting to pull these performances out of already brilliant actors has been super fun.”

For his part, Grey’s co-star Justin Chambers (Alex) describes his longtime co-star as an “actor’s director” and notes that he’s proud of Pompeo for stepping behind the camera and taking on a greater leadership role with the series.

“She really seems like a natural,” he says. “Think about it: She’s been here for 13 seasons. She’s seen everyone come and go and worked with so many directors that she probably has taken something from everyone. And she knows these characters. I call her Girl Friday because she’s a smart woman and she can watch, sit back and take it all in and knows everyone so well.” 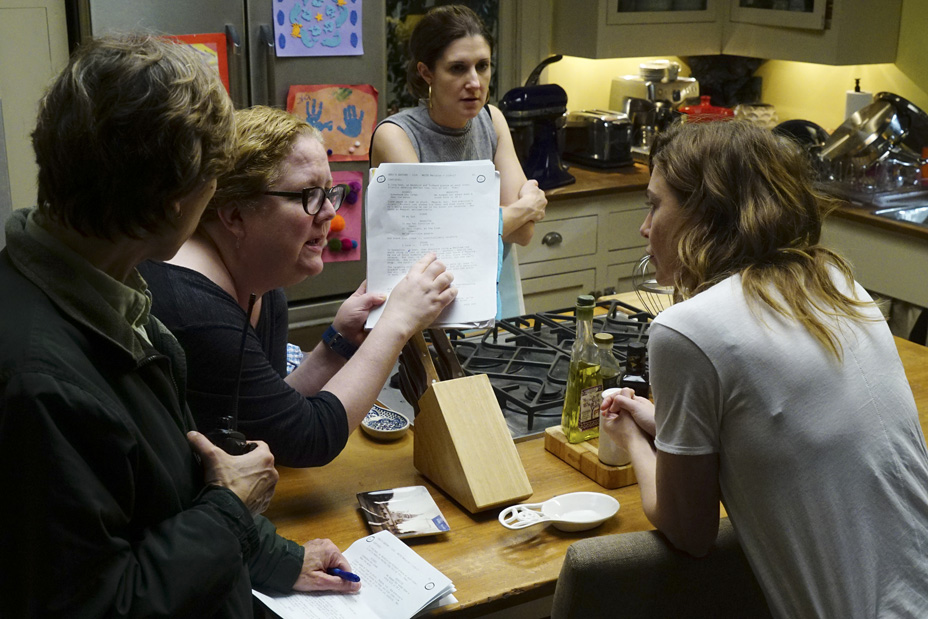 To hear McCreary tell it, Pompeo’s ability to come in with a personal connection to the story helped bring a heightened energy to filming the episode.

“She’s trying a lot of new shots and she has a lot of ideas about what she wants to get across thematically with the pictures,” McCreary says of her onscreen sibling. “There’s a lot of Maggie on her own to depict this profound isolation of what it’s like when you’re taking over the caretaking role in a mother-daughter relationship, and when you’re in a foreign environment. Ellen has so many ideas for how to capture that. Before we get into these scenes, she adds to whatever imaginative and emotional life I have going on in a way that only she can because of her insight after 13 years of working on this show and playing Meredith Grey.”

In a larger sense, it should come as no surprise that Pompeo is finally taking advantage of the opportunities that exist within Shondaland, where stars including Wilson and McKidd as well as Scandal‘s Tony Goldwyn, Stanchfield and Scott Foley have all learned the craft of directing.

“All it takes is just mentioning the interest,” says Wilson, who was asked by frequent Grey’s director Rob Corn to step behind the camera back in season four. “We’ve had several of our crewmembers that have come aboard to direct; our writers have; our script supervisor Nicole Rubio is off directing all over the place and she’s at Scandal now.”

While Pompeo has already asked if she can helm another Grey’s episode in the near future, don’t be surprised to see her co-star and friend Jesse Williams (Jackson) get the directing bug next.

“I’m going to be a director in this business,” says Williams, who, like Pompeo, is also starting to develop new ideas for TV. “I thought about directing years ago on this show and shadowed Chandra Wilson and it was wonderful. I learned a lot and she’s a great teacher. I kind of lost interest but I think the time might be coming soon for me to consider it again. Grey’s is a very safe place to do that. As a brand, Shondaland is all about empowerment and seeing potential in people who are often overlooked. We are in a culture where mediocrity is celebrated from certain groups and everyone else has to be excellent to get a chance to even be considered to maybe almost possibly be considered to get a chance at something. Shondaland goes straight to the talent.”

'Grey's Anatomy': What's Next for the Couples as Season 13 Heads to a Close