Twenty new series have premiered on the broadcast networks this fall. About half of them, recent history suggests, won’t live to see the 2019-20 season. The odds of more than a handful surviving past four seasons — enough time to build up a decent library for an afterlife on a streaming platform or in syndication — are vanishingly small.

It’s never been easy to mount a long-running series on a broadcast networks, and with the explosion of original series across cable and streaming services in the past decade, it’s become even harder. Unless, that is, a show already had a substantial life before the streaming era began.

The current season is something of a golden age for series that are, well, in their golden years: 18 entertainment shows on the broadcast nets have been airing for a decade or more. There’s at least one on each network — even The CW, which is in its 13th season and whose longest-running show, Supernatural, predates its existence by a year.

Four of those 18 decade-plus series are in at least their 20th year, and at the extreme end of the spectrum, The Simpsons is in its record 30th season. And, in a postmodern twist, several of those shows that debuted before the rise of streaming shows may at least partly owe their continued existence to the likes of Netflix.

(For the purpose of this story, unscripted shows that run multiple cycles per season are counted by years on air, not the number of cycles — Dancing With the Stars and Grey’s Anatomy both premiered in the 2004-05 season, for instance, and are in year 15. Survivor is in its 20th year, having premiered at the tail end of the 1999-2000 season.)

Network schedulers and research heads that spoke to The Hollywood Reporter invariably agreed that in the Peak TV era, the allure of stability has never been greater — and neither have the ways for veteran shows to be found by new audiences.

“Some of these shows are being rediscovered by younger viewers because there are so many episodes on other platforms that they binge-watch and come back to linear,” said Andy Kubitz, executive vp programming strategy at ABC. “The perfect storm is where you keep these shows on for many, many years — then they’re rediscovered and relaunched and brought to a whole new group. It can become a self-supporting cycle.” 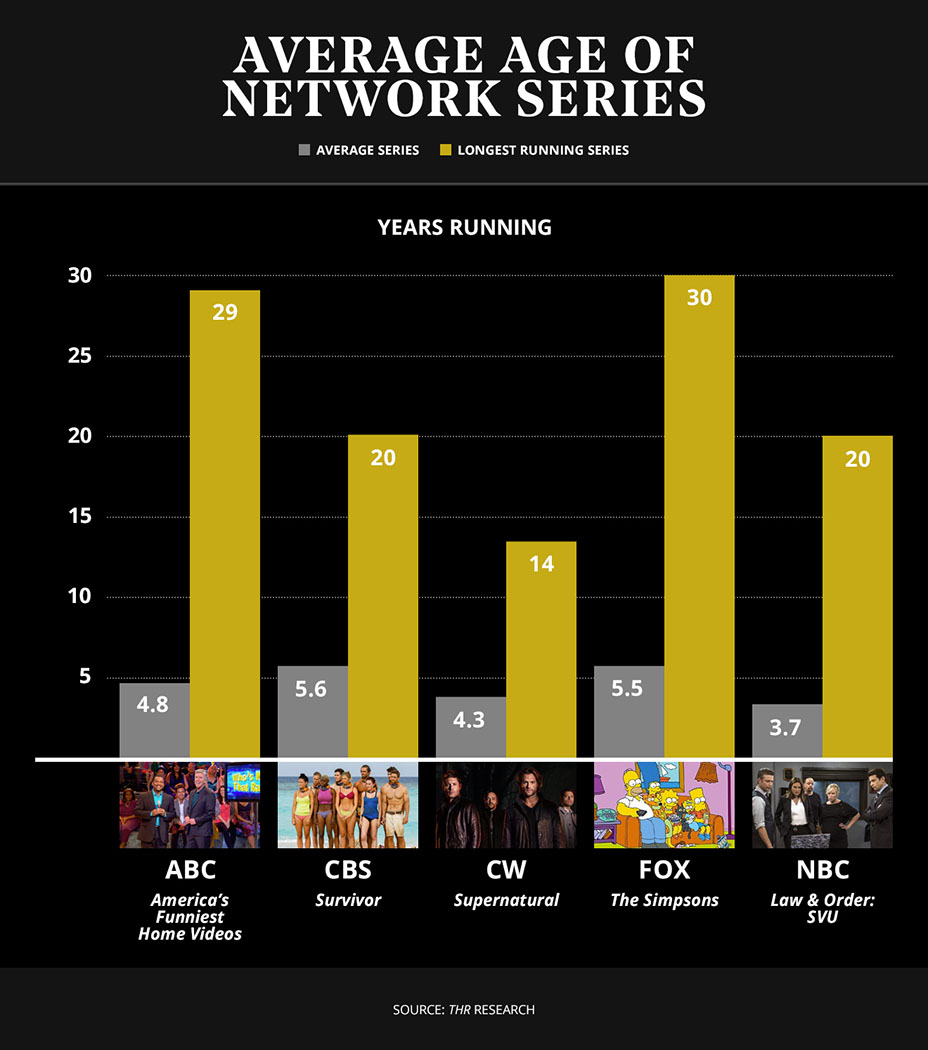 The average network series (excluding news programs and regular live sports telecasts) has been on the air for just under five years (4.8, to be precise). CBS has the longest-running lineup with an average series age of 5.6 years, including seven of the 18 decade-plus shows.

Fox’s dramas are collectively the youngest of any network with an average age of 2.6. Empire and Gotham are the senior members at five years each. Thanks largely to The Simpsons, Family Guy and Hell’s Kitchen, however, the network has the second-oldest lineup at an average of 5.45 years on air.

That Fox has two animated series which have been around since the 1990s (Family Guy premiered in 1999, was canceled in 2002 and brought back in 2005) speaks to the malleability of animation, said Dan Harrison, executive vp strategic program planning and scheduling at the network.

“I put animation, which is unique to Fox, as a distinct category of programming that sustains and refreshes itself partly because no one gets older. Even though Bart Simpson never has a birthday, the topical humor evolves the storytelling,” said the exec. “The same can be said of Family Guy and Bob’s Burgers [now in its ninth season]. … And you get to explore creatively in a way that’s impractical in other genres. If The Simpsons wants to air an episode in which the characters go all around the world, it doesn’t cost any more than having it take place all in their house.”

NBC has the freshest lineup of any of the networks, with its average series having been on the air just 3.7 years — a product, in part, of the network having done a sizable teardown and rebuilding of its schedule this decade after a sharp decline in the post-Must-See TV era. The CW, while going after young viewers, has a slightly older lineup, with the average show having been on air 4.3 years. ABC is in the middle of the pack, right on the all-network average of 4.8 years.

In a time when breakout new hits are ever more the unicorns of network TV, veteran shows hold the appeal of consistent delivery of audiences. They’re not the shiny new objects that attract huge amounts of attention each fall, but the NCIS-es and Law & Order: SVUs of the broadcast world are essential to healthy lineups.

“As the number of options have just been skyrocketing and it’s harder and harder to get new programs sampled, the tried and true are holding in there,” said Jeff Bader, president of program planning, strategy and research at NBC. “You know you have a guaranteed level of performance with some of these returning shows, so it might just be a little bit less risky to stick with some of these.”

The preponderance of shows in their teens and 20s also speak to “how alive and well [network TV] is,” said Noriko Kelley, executive vp program planning and scheduling at CBS. “It’s also incredible to see shows that consistently do well season after season, that help time periods and nights do well.”

Case in point: NCIS, which has occupied the 8 p.m. Tuesday spot on CBS since its debut in 2003 and has been a top-five show in total viewers for each of the past 10 seasons.

“You see the strength … of NCIS, which is in its 16th season, yet still last season was the most-watched drama,” Kelley said. “And it has consistently been used to launch new hits — NCIS: LA, NCIS: New Orleans, Bull and now FBI.”

Similarly, Grey’s Anatomy has been on since the 2004-05 season and has never finished lower than 13th in the adults 18-49 demographic or 32nd in total viewers. (It is currently seventh in the demo and 23rd in viewers for 2018-19.) Kubitz credits some of the show’s staying power to new viewers discovering it on Netflix, binge-watching past seasons and then joining the on-air run.

“From research, we know that young people are discovering Grey’s Anatomy. This couldn’t have happened 10 years ago because the windowing and multiplatform places didn’t exist,” he said. “It is amazing to see the young people come out for Grey’s Anatomy after 15 years.”

Digital viewing has also helped refresh Law & Order: SVU, which is in its 20th season on NBC. The average on-air viewer of SVU is over 55; on streaming platforms, NBC says the average SVU viewer age is 30 — two years younger than the streaming audience for the network’s biggest show, This Is Us.

A lineup made entirely of shows that debuted before the streaming era wouldn’t be sustainable, given that shows get more expensive to produce as they age. All the schedulers and research gurus THR spoke to said they strive for a mix of long-running series and newer shows that can draft off — or, in rare cases, build on — the established ones as they develop their own audiences.

But they also see little upside to canceling such long-running series unless evidence — a combination of ratings and backend profitability, or lack thereof — unequivocally tells them it’s time. Or, in the case of a series like The Big Bang Theory, there’s a mutual agreement on an end date.

As Kelley put it, “It’s hard to argue with not letting them be on the schedule because they’re such dominant players in their fields.”