The sibling reunion occurred after Amelia (Caterina Scorsone) and Link (Chris Carmack) flew to New York for a surgery and bumped into Nancy Shepherd (returning guest-star Embeth Davidtz), who invited the duo over for dinner. The only catch being that Amelia never informed her family of her divorce from Owen (Kevin McKidd) — or her brain tumor, foster kid Betty or Owen’s adopted son Leo, among other details.

The meal turns ugly when Amelia’s mother Carolyn (returning guest-star Tyne Daly) crashes the dinner and instantly remembers having met the real Owen (Kevin McKidd) when she visited son Derek (former star Patrick Dempsey) years ago in Seattle. The estranged siblings have at Amelia, recalling all the ways in which she screwed up her life and the (many) mistakes she made. 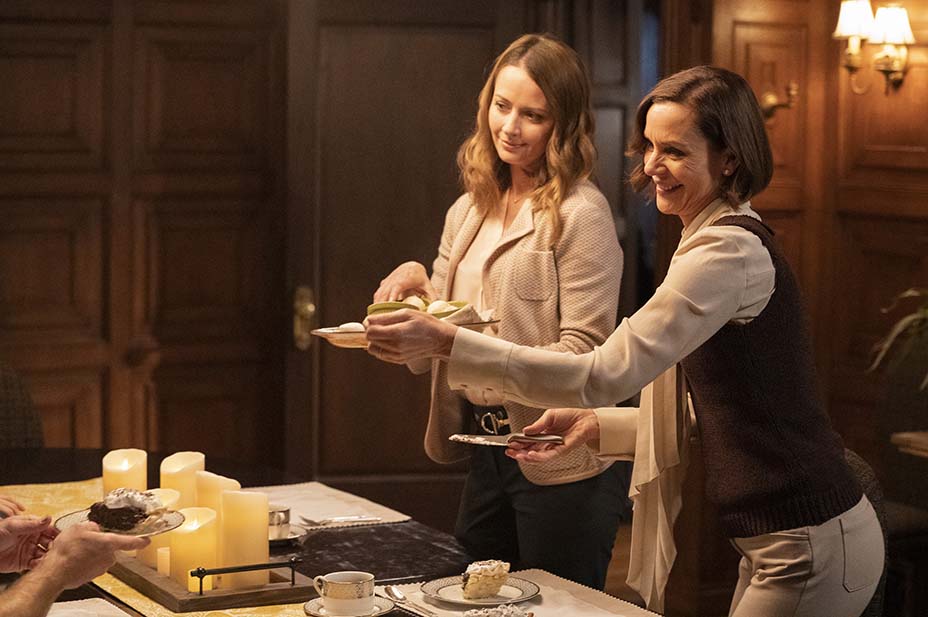 After Link — her current love interest — comes to her defense, Amelia reveals her frustrations that her sisters (and mother) only see her as the screw-up and “Black Sheep Shepherd,” her childhood nickname. This is why none of her siblings or mother wanted to come to her wedding to Owen.

In typical Grey’s fashion, Amelia and Link’s patient — and his brother — provide a lesson for Amelia, who makes a bold surgical choice that ultimately gives a college-bound student a new lease on life. But it comes at a cost as Link pulls away from Amelia, whom he accuses of being reckless and making a risky decision because she needed to prove her family wrong.

How 'Grey's Anatomy' Pushed the Envelope With Powerful Consent Episode

The hour closes as Amelia and her mother have a heart to heart in which Amelia realizes that she sabotages her own relationships and doesn’t know how to love. What’s more, her mother fills in some gaps from Amelia’s Private Practice backstory when she reveals that the youngest of the Shepherd siblings is the most like her father — whom loyal Grey’s viewers recall was murdered before Derek and Amelia. Carolyn’s biggest regret, she says, is not being there for Amelia.

Amelia comes away from the conversation with an understanding that she doesn’t need her family’s approval — she already has it in sisters-from-other-misters Meredith (Ellen Pompeo) and Maggie (Kelly McCreary) — and that it’s up to her to realize she’s worthy of love.

Below, star Scorsone talks with The Hollywood Reporter about the Amelia stand-alone episode and romantic future with Link (who apparently can be easily won over with a box of doughnuts from his favorite favorite spot in New York). 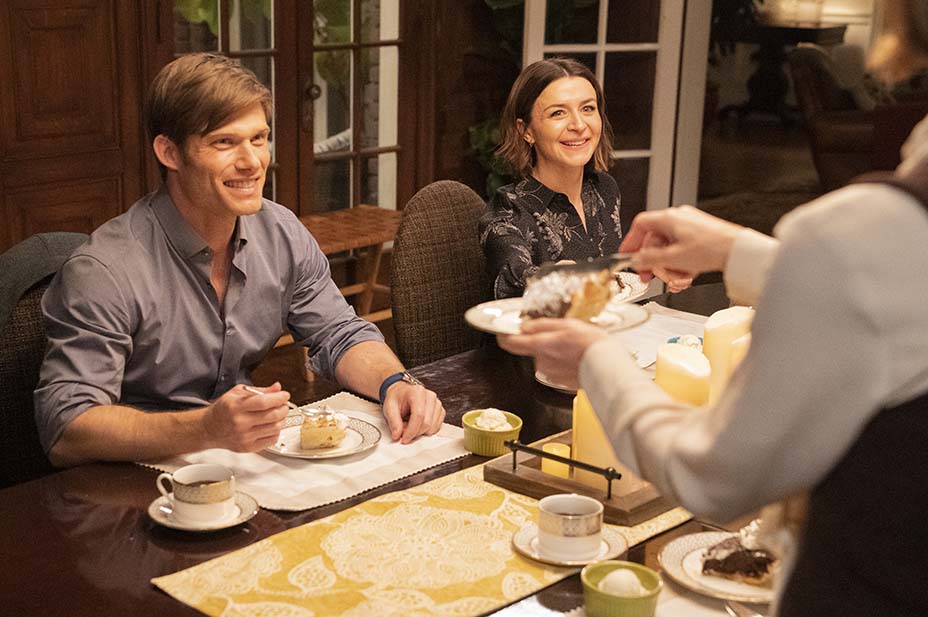 Amelia is having quite an emotional journey this season: reconciling with Owen, fostering Betty and Leo and learning of Teddy’s pregnancy. Then losing her kids and splitting with Owen. What’s been your biggest takeaway about Amelia this season?

We’ve seen Amelia be unbelievably resilient. She must be made of some sort of rubber because she seems to bounce! [Laughs.] One of the really nice things I’ve been able to play this season is some of the lightness, fun and humor that we got to see on [Grey’s spinoff] Private Practice a lot more. She’s got this wry life, is crazy and is finding the joy amid all of the chaos. That’s been really fun to do.

Amelia’s mother helps her understand that she sabotages relationships and doesn’t think she’s worthy of love. What made her come to that realization?

There were a few hits a couple episodes ago when Owen and Amelia were at the lawyer’s office talking about who would have custody of Leo. Owen said something like, “You’re just not capable of love.” It was a knife to Amelia’s heart and she was so devastated by it — especially after being so patient, amazing, loving and supportive of Owen and Leo all season long, and trying to be so patient with the Teddy situation. That was quite a quagmire! [Laughs.] That was really hard for her to hear. Then having her sisters confront her over and over again and seeing how she wasn’t really connecting with Link even though he was being so charming, accommodating and lovely. Amelia was trying to keep him at bay emotionally. She’s had enough clues that maybe there’s something in her psyche that she’s not been willing to look at.

Amelia’s mother, despite all the twisting roads that Amelia has gone down, was courageous and generous to really face and admit to her part in the broken attachment Amelia had as a child. She endured a terrible trauma at age 5 when she saw her father murdered in front of her. Then her mom says, “Listen, I’m sorry I wasn’t able to be the kind of psychological container that you needed at that age to move through that trauma in a way that would leave your ability to connect intact.” She really takes responsibility for her part in Amelia’s early relationship with attachment and love. And then also says, “And I believe that you’re smart, strong and brave enough that now that you have this last piece of the puzzle that I’ve given you, that you can put it all together and move forward and have beautiful relationships. That’s on you.” She hands the baton back to Amelia, now with the final piece in place, and says, “I’m giving it back to you; you now understand your childhood. You can do the work and can have love.”

This episode really filled in some gaps with Amelia’s family and why she’s not close with them. How will the dinner from hell and conversation with her mother help fuel what we see next from Amelia?

I do feel like there was an incredible healing and closure at two points in this episode. First, in that moment where she was able to tell her sisters that, as opposed to try and earn her sisters’ approval, finally, after seeing how relentless they were to her at the dinner table and that they just weren’t willing or able to see that Amelia had become a pretty wonderful person in adulthood — she’s a neurosurgeon, she gives back to her community, she has relationships, she loves children. She does all these wonderful things and her sisters weren’t willing to allow their narrative about her to change. Amelia accepts that finally and stops trying. At the door when she’s leaving, she says, “I believe you that you love me but you don’t like me and I don’t really like you, either.” She allows that to be OK for herself. She can love her family but if every time she’s near them, they tell a story about her in their own minds that traps her in an identity that doesn’t match up with who she is today, she does have permission to not expose herself to that kind of judgment. She can go create family where she finds love: in Seattle with Meredith, Maggie and the people she has surrounded herself with — her chosen family. That was a huge moment for her. And the healing that was given to her by her mother at the end and the apology and the piece of the story that she was missing. And the reconciliation with her mother. I think it’s going to free Amelia’s psychological bandwidth up a lot. We’ll see how that goes. She is letting go of the old story of Amelia as the black sheep and she was able to leave it in New York. Now we’ll see next season what the new story is.

Amelia and Link reconcile on the plane. Amelia now has this liberation and missing piece of the puzzle. What will she do with that awareness now? Will Link or Owen be a part of that?

That I don’t know. The writers are starting to break story for next year right now. All the irons are in the fire trying to think about where it goes next year. All I know is that they don’t know anything yet! I’m trying to stay open. Chris Carmack is very talented and we’ve had some great comedic scenes that have been really fun to play. And Kevin and I are best friends and love working together. So whatever direction they decide to go in, I’m in a pretty great position as an actor.

If you’re writing Amelia’s next act and had the choice between Link or Owen, who do you see her with?

I can’t possibly answer that! There are such good things about both of them. The nice thing is that Grey’s is doing so well that I feel like we are going to get to play out whatever we want to play out. And if we love it we go with it. And if it’s not working, we can go in another direction. We have time to play all those stories we want to play because our fans are so gorgeous and passionate. Knock on wood, hopefully we get to see all of the stories that we want.

How would you describe the season finale?

It’s a Grey’s Anatomy season finale! Debbie Allen is directing. There’s some fun, big stuff happening. It’ll be funny and it’ll be delightful and there will be catharsis. Classic Grey’s.

For a season that was dubbed — and delivered — the “Season of Love,” is the finale a fitting end for that?

Yeah, I think so. Love in all its forms.

"Love Is Love": How 'Grey's Anatomy' Is Flipping the Script From Its McDreamy Days