There’s a line of dialogue in Thursday’s Grey’s Anatomy that showrunner Krista Vernoff rewrote more times than she can count. But the impact of the line — from out trans actor Alex Blue Davis (who plays new intern Casey) to his boss, Bailey (Chandra Wilson) — was worth reworking a million times: “I’m a proud trans man, Dr. Bailey. I like for people to get to know me before they find out my medical history.”

The moment comes after Casey has just saved Bailey and all of Grey Sloan Memorial from a hacker who, having taken over its computer systems and air conditioning, left several patients in jeopardy and pushed the hospital to the brink of closing. The episode also followed Casey’s very personal reveal, having let both his new colleagues and viewers alike get to know him as a person before they learn something deeply personal about him.

“We worked very hard and very closely with Alex and [LGBTQ advocacy group] GLAAD on this storyline,” Vernoff tells The Hollywood Reporter. “The scene in which Casey disclosed to Bailey that he was a ‘proud trans man’ was rewritten more times than anything else — we wanted it exactly right.”

Inspired by President Donald Trump’s proposed (and since blocked) ban on transgender individuals serving in the armed forces, Vernoff set out to tell a story about a trans veteran. Vernoff then intentionally cast a trans actor for the role of Dr. Casey Parker, one of the long-running medical drama’s six new interns for season 14.

“We wanted the audience to get to know this character before they knew his private medical information; we wanted his disclosure to not feel like an ‘A-ha!’ shock but a genuine unfolding of this character’s truth when he felt safe with someone,” Vernoff says.

Thursday’s episode resolved the hospital’s cliffhanger from last year’s midseason finale as Casey confides in Bailey that he was arrested for hacking into the DMV’s computer system. Bailey is initially stunned as her background check on her new intern didn’t catch that very important fact. That’s when Casey discloses that there was a mistake on his driver’s license that wasn’t a typo: his local DMV declined to issue him a new license with his proper gender after he transitioned, so he hacked into the system and fixed it himself. 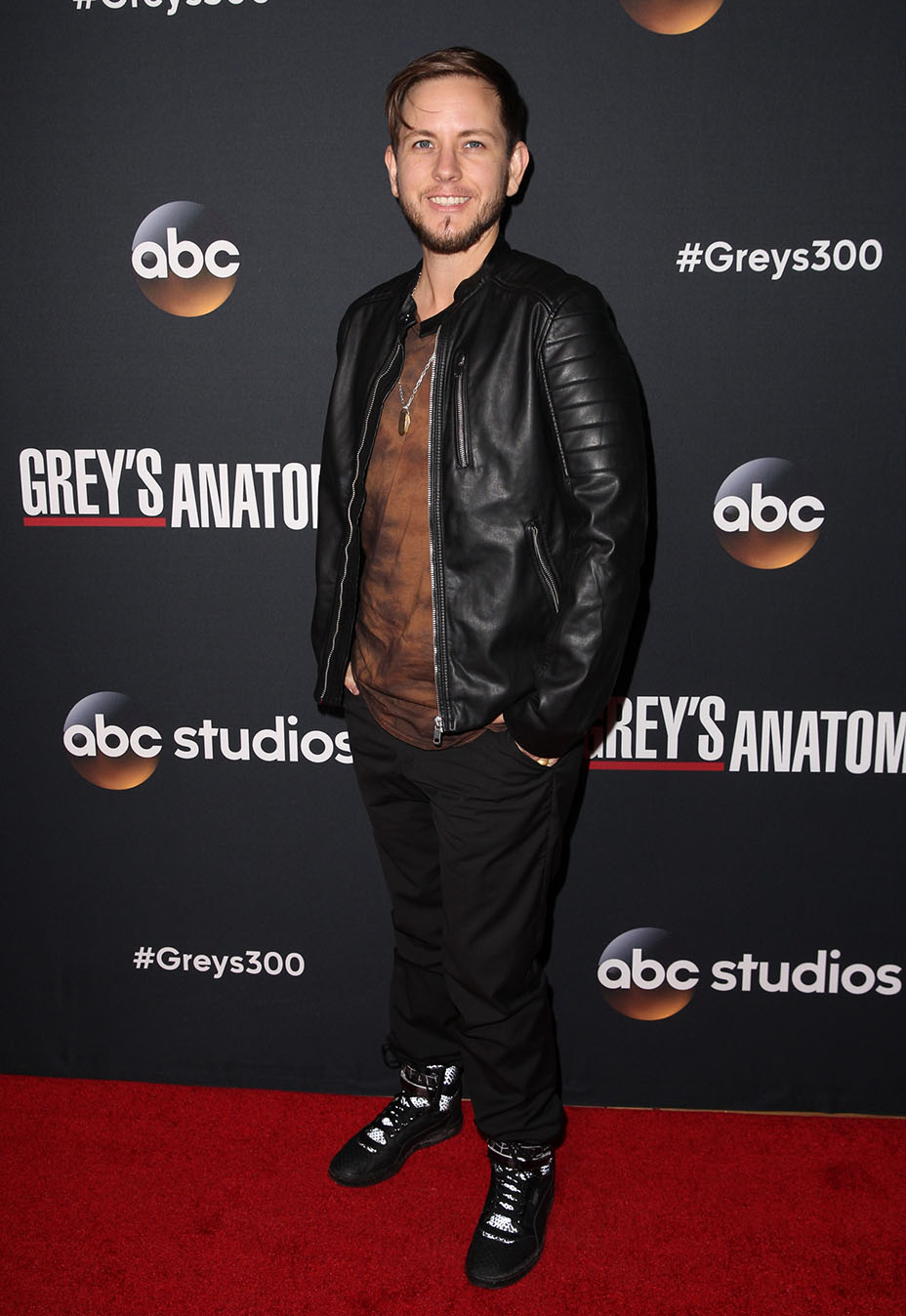 Davis, whose previous credits included episodes of 2 Broke Girls and NCIS: Los Angeles, says he knew when he was cast that he’d be playing a character with comedic sensibilities that come from a Sandra Oh-like level of directness — who also was transgender.

“What’s cool about the show, the episode and Krista’s vision for this character is he’s about way more than being trans,” Davis says, noting that he sees Casey’s story as unexplored territory on the small screen. “I cried at the table read, it was very moving for me. I’ve been waiting for a moment like this on TV my whole life. I am so honored I got to say that line on TV because it’s a long time coming.”

Indeed. Just like Ellen’s coming out on her ABC comedy in 1997 proved to be a landmark moment in television and pop culture, transgender characters have become more common on the small screen: Showtime’s Shameless features trans actor Elliot Fletcher (who also played trans characters on Faking It and The Fosters) in a romantic storyline with a gay character; Orange Is the New Black star Laverne Cox made history last season as broadcast’s first openly trans actress playing a transgender series regular character (on CBS’ short-lived Doubt) and multiple trans actors have had roles on Amazon’s Transparent. But what Davis and Vernoff hope Grey’s can do is advance the types of storytelling featuring trans characters and actors.

“Trans people for years have been represented as punchlines, victims and villains and not as whole people and I was not aware of that until I went through the experience of my friend’s son disclosing that he was transgender,” Vernoff says.

Those (married) friends were former Grey’s Anatomy showrunners Tony Phelan and Joan Rater (whose son helped inspire Cox’s character on Doubt) and with whom Vernoff remains close after working with them as far back as season two of the Shondaland medical drama. (Phelan and Rater’s son, Tom Phelan, played a trans character on Freeform’s GLAAD Award-winning drama The Fosters.)

“When Tom transitioned, I found myself confused, frightened and bewildered by it all because I had never personally known a trans person [nor understood] what it meant for Tom,” Vernoff confesses. Rater, Vernoff recalls, at the time sent a lengthy email to friends and family in which she posed questions and answers that they might have about her son. Vernoff was moved by the experience and never forgot the feeling of love and acceptance she saw for Tom from Phelan and Ratner and those around them.

“Realizing that a trans person is like any other person with a journey in this lifetime — they are not victims, villains, weird or wrong; they’re none of the things people believe when they support laws like the one that Trump put forward,” Vernoff says. “My goal as a storyteller was to help illuminate that experience as an ally. I reached out to GLAAD for help in doing that because I am only an ally and not a member of LGBTQ community. They were more than happy to help.”

For the L.A.-born Davis, also a singer-songwriter whose music has been featured on shows including MTV’s Pranked, seeing more inclusive storytelling in which trans characters are not sensationalized is a welcome change.

“TV is opening up a greater range of roles [for trans characters]: Laverne played a lawyer on Doubt, and I’m playing a doctor — both roles haven’t really been seen before [for trans characters],” Davis says. “People can see trans folks in a new light: these are people who walk among us and are human beings who have lives. They’re not defined by being trans.”

“What’s important for me to remember is there are opportunities out there where I don’t have to play trans,” Davis says. “I’m an actor. I love acting. I do love that I’m also representing a group of people who have been underrepresented, and that’s awesome. But being trans is not my identity; I identify as male. There are male roles out there that I want to play. And being an actor who happens to be trans, it’d be awesome if all those roles opened up for me because people see me and how I define myself.”

What's Behind the Rise of Transgender TV

As for what comes next for Casey, Vernoff says the writers have talked about casting a love interest for Davis’ character. The showrunner also hopes to reunite with Fletcher, with whom she worked on Shameless, and cast the actor as “just a dude” on Grey’s.

“There’s so many beautiful stories to tell and representation changes minds and hearts,” Vernoff notes of the impact of art on society. She pointed to Grey’s creator Shonda Rhimes adding characters like Arizona (Jessica Capshaw) and Callie (Sara Ramirez) at a time when it was still considered a rarity to put gay or bisexual people on TV and having audiences fall in love with them before revealing their sexuality. “When there’s bigotry in the world, people can point and say, ‘No, I have a friend who is gay and it’s someone you know’ — and you realize that it’s a character you love on TV. That’s how we influence people to open minds and hearts.”

That’s part of the reason Vernoff wants to try and avoid telling a story in which Casey faces any backlash just because of who he is. “One of the things we talked about with GLAAD is wouldn’t it be revolutionary to just tell human stories about trans characters? There’s a fair amount of hate that’s already depicted and hate feeds hate. I just wanted Casey to be a whole person who is an Army veteran, a good doctor and one of the gang — who happens to be trans. I didn’t want to do hate,” she says.

That’s not to say that Casey won’t disclose his medical history again in an upcoming episode as Vernoff and the Grey’s writers have yet to break the last third of season 14.

“We talked about how, when and why trans people disclose their private medical history to their community. Casey might disclose out of advocacy, if we had patient who was trans or doctor who was insensitive to patient but I imagine Casey has disclosed to some of the interns,” Vernoff notes. “My goal for Casey was to gently disclose his private medical history to Bailey and, by extension, to America and then keep him in our world as the doctor he is becoming. I told GLAAD and Alex that I’m open to continuing to talk and work with them if there are more stories that would be helpful or ways that I can be an ally.”

Grey’s Anatomy airs Thursdays at 8 p.m. on ABC. Click here to read our interview with Vernoff and co-star Camilla Luddington about the domestic violence storyline featured in Thursday’s episode.