When Madeline Brewer first surveyed the shooting location of “the Colonies,” the frequently discussed but rarely seen area in Gilead’s countryside, she was struck by the scale and scope of the Canadian landscape.

“We see these beautiful rolling hills and cornfields,” the actress, who plays Janine, tells The Hollywood Reporter. “The sun was going down as we were shooting some of those scenes … it was just really beautiful. Canada is a beautiful place.”

And yet: “It was freezing. Which sucked!”

The dichotomy between the visual splendor and the frigid temperature of the Colonies is represented in an even more drastic and stark way in the context of Hulu’s The Handmaid’s Tale, which spends much of its second season’s second episode shining light on the newest dark corner of this dystopian world. In the episode, called “Unwomen,” viewers see that there’s a deadly undercurrent brimming beneath the surface of the Colonies, irradiated with pollution that’s lethal for the unfortunate souls sent to work the land.

“It’s all the more gut-wrenching when you come in close and you put a magnifying glass on it,” Brewer says of the Colonies. “You suddenly realize there’s smoke bubbling up from the ground, thanks to the toxic waste in the soil.”

There are other enigmas at the heart of the Colonies, and at the heart of “Unwomen,” too: specifically, Emily, formerly known as Ofglen, played to Emmy-winning heights by Alexis Bledel. Last seen in season one’s fifth episode, Bledel returns as a series regular for season two, with Emily now living in the Colonies thanks to her previous acts of rebellion. Back when she was interacting with Offred (Elisabeth Moss), Emily was a champion of the efforts to resist against Gilead. When we meet her again in “Unwomen,” Emily feels as if she has lost the war.

“She knows she’s going to die here,” says Bledel. “She’s not making plans for the future. She’s not holding onto hope in quite the same way that we saw in her last season.”

The episode, written by showrunner Bruce Miller, and directed by Mike Barker, puts Emily’s present conflict in contrast with her past. Flashbacks reveal Emily as a biology professor whose livelihood is threatened by the rise of Gilead, on multiple fronts: her continued association with her profession, yes, but also her physical safety on a much more urgent level. When her colleague and friend (played by John Carroll Lynch) is hanged and killed for being gay, Emily and her wife Sylvia (Clea DuVall) attempt to flee the country along with their young son.

When they arrive at the airport (which is swarming with ICE agents; a deeply unsettling image given ongoing events in the U.S.), Emily and Sylvia learn that their marriage is no longer recognized under the new law. Sylvia and her son are able to move onto Canada, but Emily is forced to stay behind in a country that no longer recognizes her human rights. It’s a brutal depiction of the fall of civilization from Emily’s perspective, albeit one that Bledel saw coming due to conversations she had with Miller over the course of filming season one.

“When I got the scripts for season two, it was the same as what he had told me,” she recalls. “When you see it dramatized, it impacts you differently. This is a woman who was thriving in her own life with a loving family and a satisfying and successful career that she loved. To have that stripped away from her? It’s such a shame and such an injustice. It harms her deeply.”

In her present reality, Emily spends her days out in the Colonies “forced to do excruciating manual labor,” as Bledel describes it. Through that work, the actress discovered something surprising about her character.

“Standing there, thinking about that contaminated Earth, I discovered that she still has this sense of personal dignity, even there,” Bledel says. “She knows what’s happened to her is wrong. She’s a victim of so many traumatic injustices. She’s been harmed, attacked and abused. She knows it’s wrong. She has a strong sense of justice. She knows what’s right — and so she doles out justice herself.” 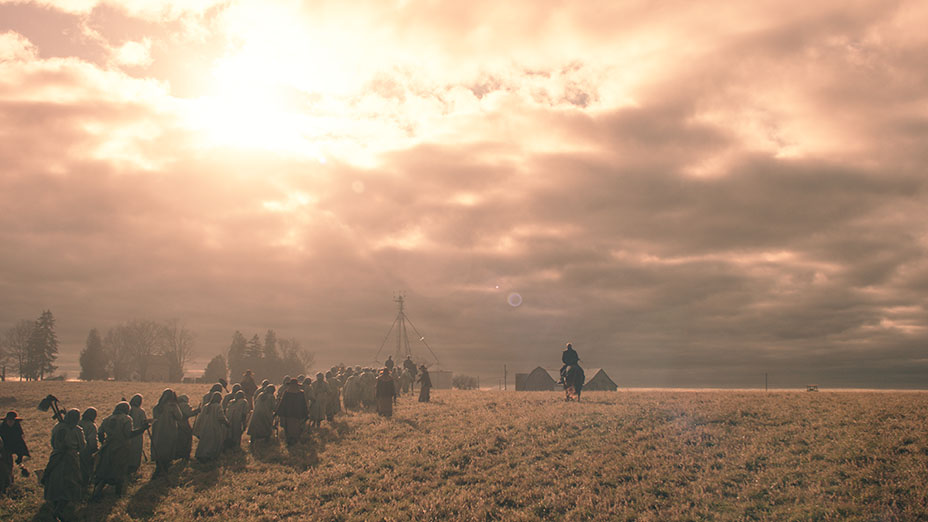 Enter: Mrs. O’Conner, a commander’s wife sent to the Colonies who still fervently believes in the ideals of Gilead, her own sins notwithstanding. The character is played by Academy Award winner Marisa Tomei, a casting coup for Hulu’s Emmy-winning drama.

“We’re in an incredible position where every other day, some manager or agent reaches out and says, ‘My client is obsessed with The Handmaid’s Tale. I want you to know they will do anything to be on your show.’ We don’t know how to deal with all of the responses that we’ve had,” executive producer Warren Littlefield tells THR about how Tomei’s casting came about. “We felt that there was an opportunity in this second hour. We needed a great actress [for Mrs. O’Conner], and we felt that maybe we should pay attention to some of the names who reached out. We agreed that Marisa was someone we wanted, and she grabbed the opportunity to be a part of it.”

The opportunity, as it turns out, was a limited one: Tomei’s character is dead by the end of “Unwomen,” poisoned to death by Emily, who has been spending much of her time in the Colonies tending to the ill. Weighing in on why Emily decides to kill O’Conner rather than help her, Bledel says, “This is a wife of a commander. It’s very rare [to see someone like this in the Colonies]. Emily is intrigued, and in that moment, she has what might be an angry impulse — and she knows she’s going to dole out justice in a different way.”

Hulu Beyond 'Handmaid's Tale': Execs and Stars on a Promising Yet Uncertain Future

“Emily has been hardened by all that she’s been through,” adds Littlefield. “She offers no forgiveness. We’re not sure at first. She seems like she’s loving, nurturing and very maternal at first. And then it’s pretty shocking and surprising [when she kills O’Conner]. We use this character who comes into our world for an episode and it sheds an everlasting light on the character of Emily, and a new dimension we haven’t seen. It’s a great use of someone who joins our family for that episodic experience.”

Just as Emily bids farewell to a new enemy in Mrs. O’Conner, she regains an old friend in Janine, seen arriving in the Colonies at the end of the episode, having been banished to this toxic land after endangering her baby and attempting suicide near the end of season one. What’s next for these two former handmaids as season two pushes on?

“Emily is carrying a great deal of anger with her,” says Bledel, “and what she sees in Janine is an externalization of her own pain — but also a flicker of light that she at times tries to let shine on her. But at other times, she also wishes she could extinguish it, because it’s so painful to be around. She’s just so deeply wounded.”

“Our characters view this world so differently,” adds Brewer. “They could not be more opposite. Janine looks at the Colonies, and she sees a gift; another chance of life. Emily only sees it as the end of life: we come, we work, we die. It was really awesome to have that character to bounce off of. Janine just wants to see the light and make the most of it — and Emily sees things for what they really are.”

How 'The Handmaid's Tale' Remains Politically Relevant in Season 2

What did you make of The Handmaid’s Tale‘s first trip to the Colonies, and the exploration of Emily’s devastating backstory? Sound off in the comments, and keep following THR.com/HandmaidsTale for more coverage.