When Reed Morano was first approached to helm not only the pilot, but also episodes two and three of Hulu’s dystopian drama The Handmaid’s Tale, her representatives suggested she hold a beat. “You don’t need to do all three,” they told her. “You do one, and then you get out of there.” To the delight of the series’ now-rabid fan base, Morano, 40, didn’t heed their advice; instead, the first-time pilot director, whose prior credits include the 2015 indie film Meadowland (which Handmaid’s star Elisabeth Moss also appeared in), signed on for the initial trio and began crafting the near-future world of Gilead, which is as distinct for its nightmarish beauty as for its harrowing conditions. “I know what it’s like when you go on a show: You leave after the pilot, and then the style changes,” says Morano. “I wanted my style to be embedded.” The first-time Emmy nominee sat with THR to discuss the bumpy rise of female directors, the timeliness of Handmaid’s and the doors the MGM-produced series already has opened.

You were as much a face of this show as showrunner Bruce Miller, which is unusual for a TV director. How much of that had to do with the fact that you are female?

They were under a little bit of scrutiny for having a male showrunner, but I like to joke around that Bruce probably has more estrogen than I do, so we balance each other out. And when the women who work with him say, “No, that’s not how it is,” he listens. I was on a panel in L.A., and they asked, “How did you feel as a woman to be able to direct this show?” — placing a lot of importance on gender. And I do think it’s important, but I also think there are women who might not be able to bring the sensitivity to it, just as there are men who might be able to. So it’s not that simple. I’ve been doing all of these meetings recently, and people are pitching me ideas, and within the meeting, they realize, “Oh, she doesn’t have to tell this woman story. She could do the crazy, violent graphic novel, too.” The [industry] has to give women a little more credit. Patty Jenkins doing Wonder Woman is so great, but she could have easily done [a film with] a fully male cast.

Right. Look, it’s a really good time [to be a female director]. If you make something that’s subversive and really draws attention, no matter who you are, they’re going to push you along. But it’s helpful that I’m a woman because that’s the cool thing now — to have a woman director. All of a sudden, it’s trendy. I’m trendy! (Laughs.) And after [Handmaid’s], it’s like anything and everything is coming my way. 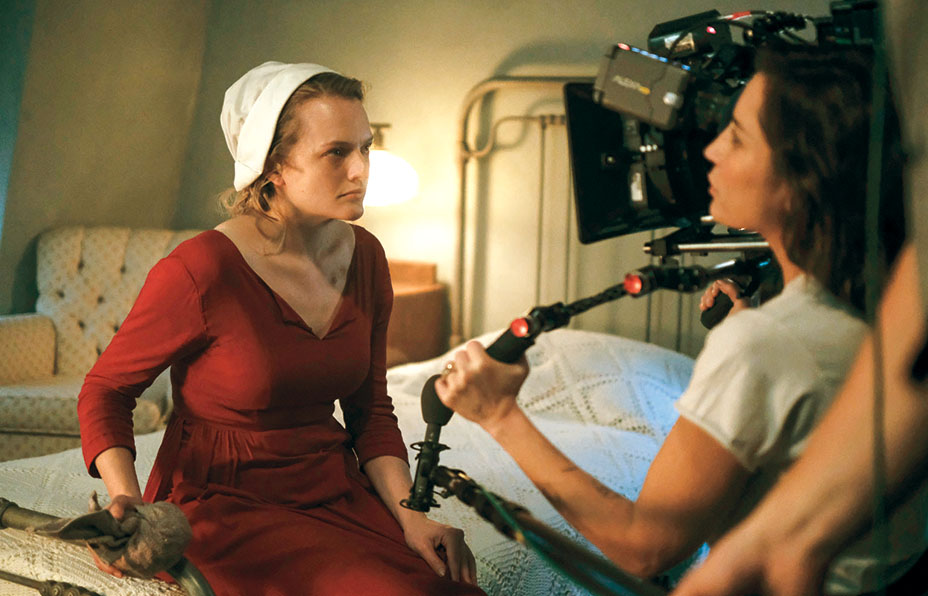 What has been the most common feedback you’ve heard?

“It feels like a movie,” which was a great thing to hear. I remember the day I found out we were going to have commercial breaks, and I almost started crying. That’s probably the only issue I have with how Hulu has to function. Obviously, that’s their model, but no one told me, and I was like, “Holy fucking shit, this changes everything.” Bruce was like, “No, no, no, you can still shoot it as if there are no commercials,” which is what I did. Him telling me to ignore that was probably the best advice I could have received, and I treated it like a movie.

There’s a school of thought that men on TV are allowed to be unlikable — and they are often embraced as antiheroes — while women typically are not. Do you think The Handmaid’s Tale has tested that theory?

One of the interesting things about Handmaid’s is that most of the villains — or most of the people on the show who are [keeping the handmaids down]— are other women. And it does kind of mimic real life in a lot of ways, even in our industry. A lot of people who are in charge in Hollywood are women, so they have the power. Now, I’ve met a lot of these amazing women who are offering opportunities to other women, and they’re awesome. But for the women who maybe haven’t done that yet, it’s like, why? Are they projecting their shortcomings onto other women, or are they scared because they are in a position to make a decision that could fail? I think women sometimes are more careful.

Emmys: Could 'The Handmaid's Tale' Be the First Streaming Outlier to Win Best Drama Series?

On election night, you were in Toronto, where Handmaid’s films. What do you remember about the moment Donald Trump was elected president?

It didn’t feel super weird because we were living in Gilead. We were like, “This is what our life is now.” [Elisabeth and I] were looking at each other like, “Oh, my God, it’s happening.” And then the next morning, I had to edit episodes two and three, so I went in and watched the assemblies and everybody there is Canadian and it felt like we were at a funeral. They were like, “I’m really sorry. Do you want to watch these episodes now?” Which was basically, “Do you want to watch the future of your country?” And then I watched, and all I could think was, “Maybe this show could do something; maybe it could wake people up.”

Prior to Handmaid’s, the buzziest thing on your résumé was Beyonce’s Lemonade video.

Oh, that little thing. (Laughs.) The highlight of my life. But I feel like such a poser, too. I shot one music video on Lemonade. There are a million great cinematographers on that job. I just want to say that out loud. So, for anyone else who asks me, “Did you shoot Lemonade?” No, I shot [the video for] “Sandcastles.”