Like so many, Elisabeth Moss is living life one Zoom conversation at a time.

She slides into The Hollywood Reporter‘s virtual chat with The Handmaid’s Tale author Margaret Atwood fresh off a regular production meeting about season four of her Emmy-winning dystopic Hulu drama, full of excitement.

On brand in a Lingua Franca sweater bearing the word nolite (part of a Latin phrase on the show that means, “Don’t let the bastards grind you down”), Moss explains that such early conversations have been steady since shooting was shut down in March. “It was like, ‘Well, I guess, yep, we’re not shooting. And we’ll talk next week,’ ” recalls Moss, who is both the star and an executive producer of the series, of those early meetings with showrunner Bruce Miller and the team. “And now, the past couple of weeks, they’ve gotten much more interesting.”

Even with Hollywood deliberating over production restarts, normalcy seems a long way away and Gilead seems disturbingly close as Moss and Atwood discuss this precarious cultural moment.

Have you proven to be better or worse at quarantining than you might have expected?

ELISABETH MOSS I’m quite the loner and I’m quite the homebody. So for me, obviously, the biggest difference is not working on set. But I’ve been keeping really busy with producing and developing. So, I haven’t felt really bored or anything. And I am very good at being alone — probably a little bit too good at it. So I’ve been, in a lot of ways, quite better at it than I thought I would be.

MARGARET ATWOOD What is it that writers do most of every day? Yeah, so basically, they’re alone with whatever’s going on in their head. So, that part is not any different, except I’m much busier. I get interrupted more because of all these cries for help. It’s very hard to pretend you’re not available. “Sorry, I’m out to dinner with like 50 people.” 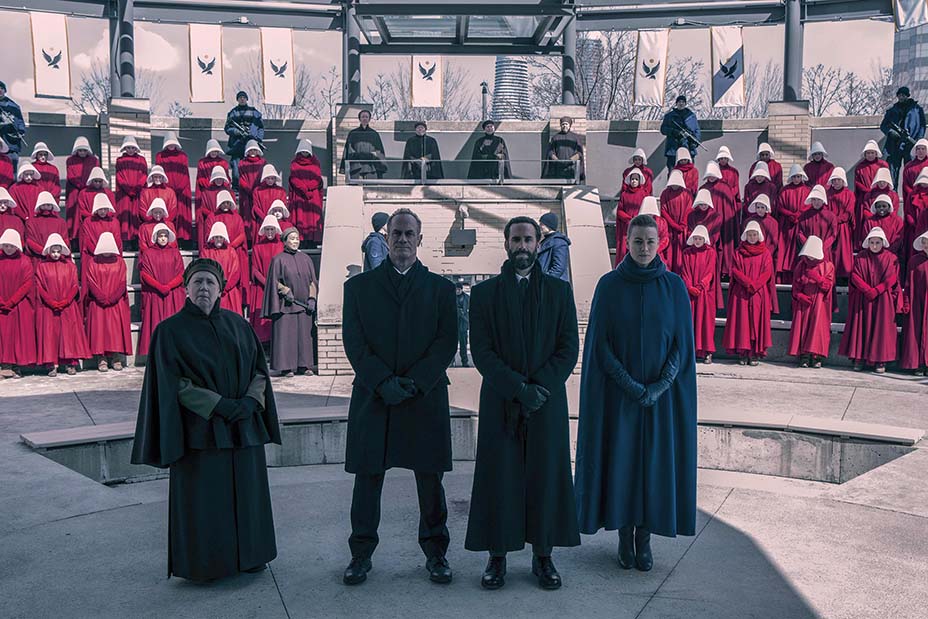 You’ve spent years addressing how the real world is or is not becoming its own version of a Handmaid’s Tale-style dystopia. Over these past few months, does it feel like we’ve shifted into a new and separate dystopia? Do you see similarities?

ATWOOD I’m seeing parts of Oryx and Crake, another book that I wrote, which is luckily not happening, because it really did wipe out quite a lot of the human race. And this is our best guess, that the mortality rate is maybe 5 to 10 percent. It’s not the Black Death — it’s not smallpox, which was fatal to a lot of people. But it is very easily transmissible, and that is the problem that we are having.

Is it The Handmaid’s Tale? The part that was scariest, I think, was unknown military or paramilitary people without identification being deployed in Washington, a pretty clear violation of the Constitution. And you keep feeling little pushes against the Constitution: pushes, pushbacks; pushes, pushbacks. There are, evidently, some people in your country [Atwood is Canadian] who would like to do away with the Constitution because it gets in the way.

MOSS Three years ago, when we were promoting the first season and we were in D.C., it was [a few months] into Trump, and I asked you, “What should we look for as the sign that the world is going to very quickly become Gileadean?” You said, “The people shooting at peaceful protesters.” I’ll never forget it.

ATWOOD The Handmaid’s Tale is not made up of prophecies. It’s made up of things that have already happened somewhere, sometime. And the reason for putting them together in a place like Cambridge, Massachusetts, [is that] people don’t take these things seriously unless they imagine that it’s something that could happen to them. As long as you feel you’re exempt from these things, you don’t take them seriously when they happen to other people.

Elisabeth, you’d just started production on the fourth season when everything was shut down in March. Have there been conversations about how the season will be changed, in terms of how the worldview has shifted for the show?

MOSS Yeah, there have, mainly between the writers and the directors, and Bruce [Miller] and myself. We have a season that’s almost pretty much written. And we’ve never been a procedural, sort of Law & Order, ripped-from-the-headlines kind of show. So I don’t think we’re going to be writing a pandemic storyline. But I think that there are themes of the season that were actually already there. I have notes in my book about human contact and human touch, isolation versus community. I’ve written the words “isolation” and “community” and “love,” and just all these themes are really already present in season four. 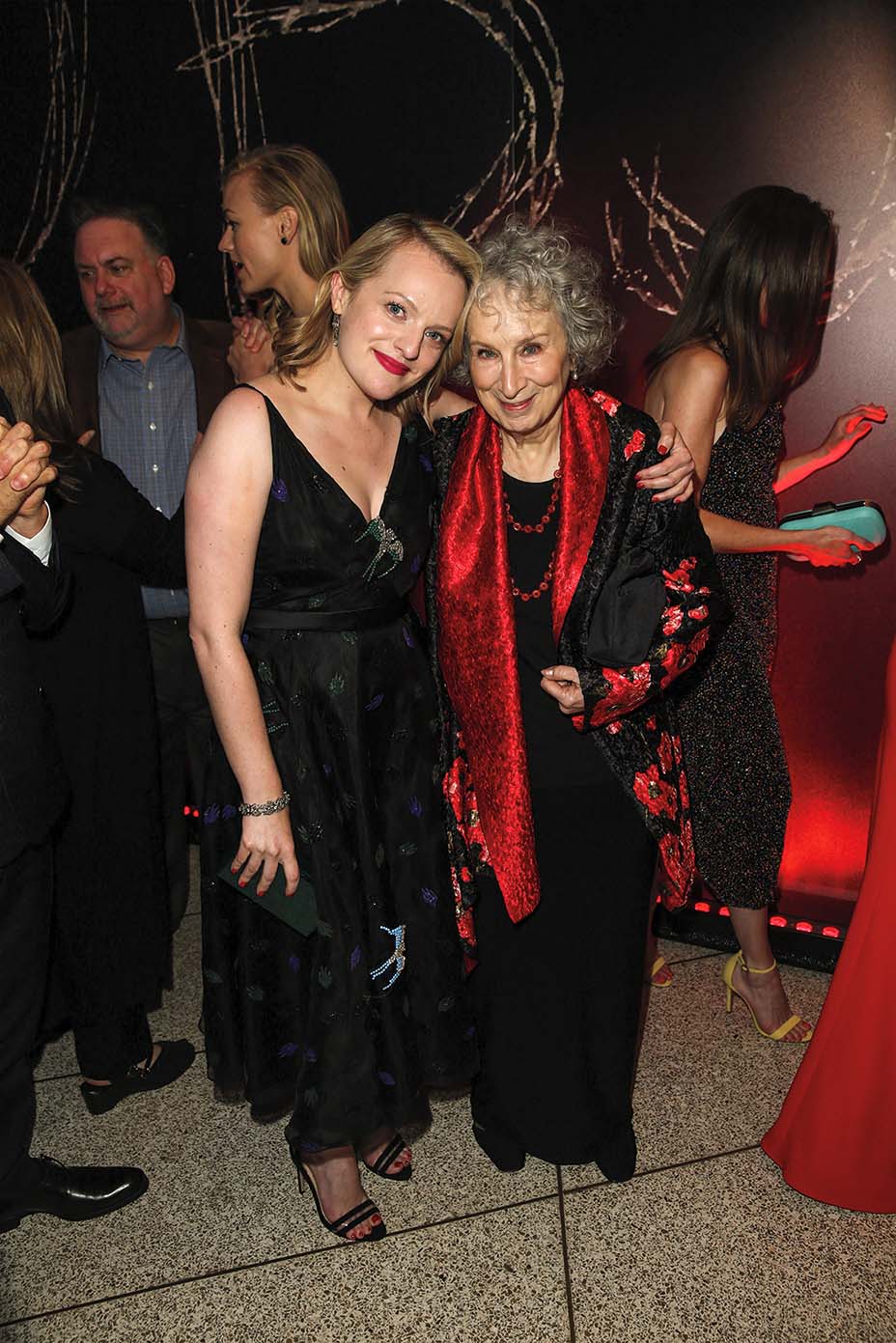 And in the fourth season you’re going to be directing for the first time. How has that changed your perspective?

MOSS The departure isn’t as large of a leap as you would think, because of being a producer and being so involved in the show every day for nine, 10 months of the year. So, I’ve thought about other characters a lot. I’ve thought about them from the writing perspective and the postproduction perspective. But as an actor and a producer, you don’t give notes or talk to the actors, and you don’t tell them what to do — that’s the director’s job. You can’t do that. It’s very rude.

So what was fun for me was to have these incredible instruments in this orchestra of these actors, the women who play the Handmaids, a few of the gentlemen, and to be able to go up to them and play these instruments. And they’re never doing a bad job. They’re always good. But being able to go up to them and just tweak something or give them an idea, and then see how it came out in their performance, was so fascinating.

I have a selfish question for Margaret, as I’m figuring out season four: What do you think is the thing that motivates June the most at this point in the series? Is it her personal survival, is it the survival of the children? Is it her daughter?

MOSS OK, good. Phew, I have the right idea. I was saying yesterday that I feel like at this point, there are sort of three versions of these characters, whether it’s June or Serena or Aunt Lydia. There’s the version that existed before Gilead, there’s the version that existed when we started Gilead, and now they’re not the people that they used to be. They’re different now.

ATWOOD Yeah. So, if you look back to U.S. history, if you look to abolitionism, the Underground Railroad and what people did when they got to Canada, you see all those factors at work. Some of them, quite bravely, went back and tried to get other people out. That was intensely brave. And other people worked with abolitionists in the States and in England spreading that message. You didn’t have the kind of situation then as much as you do now, in that June would have to go underground because Gilead, like a number of Communist bloc countries, would have assassins out there looking for her.

ATWOOD Or a Sojourner Truth figure, you can say.

For sure, though once they’re quoting Exodus …

ATWOOD All these stories, you sort of can’t tell them without reverting to the Moses story. It’s hard to tell those stories without some echo of that in our culture. The first big “Let my people go” story is that one, but there have been a lot of them. There was, for instance, a Protestant village in France in World War II that just decided to hide Jews. The whole village decided to do that. They had a guide who was guiding them over the mountains into Switzerland. It’s quite amazing. There are these stories all throughout history and all over the world. But in our culture, you tend to revert to the Moses story if you’re looking for something to quote.

But Moses doesn’t make it to the promised land. Does that feel like the way the story is heading?

MOSS I think you’re right about the promised land. I don’t know how June goes from seeing what she has seen and experiencing what she has experienced and ever is able to go back to any sort of normal life until that’s done.