[This story contains spoilers from the first three episodes of Hulu’s The Handmaid’s Tale, “Offred,” “Birth Day” and “Late.”]

Hulu’s The Handmaid’s Tale, which launched its first three episodes Wednesday, delivered one of the most stunning commentaries about LGBTQ rights on the small screen.

The series takes place in Gilead, a futuristic but simplified world in which fertility issues abound and women’s rights are a thing of the past. In order to keep the population up, totalitarian government officials send young and fertile women — the “handmaids” — to affluent families, where they are forced to help couples procreate via sexual servitude.

How 'The Handmaid's Tale' Became the Most Unintentionally Relevant Show Ever

What’s more, being gay in the new world is not something that’s at all accepted, given the prioritization on repopulating the world. It’s a charge that’s actually punishable by death, as characters played by stars Samira Wiley (Orange Is the New Black) and Alexis Bledel (Gilmore Girls) learned by the end of the first three episodes.

Elisabeth Moss’ Offred is told that her gay best friend Moira (Wiley) has been killed — though viewers never see that to be true. Meanwhle, Bledel’s Ofglen — Offred’s shopping partner and secret resistance member — is captured alongside her girlfriend. Both tried for being “gender traitors,” Ofglen is sentenced to rehabilitation — a harrowing surgery in which her clitoris is removed — after watching as her lover is hanged to death. (Ofglen’s life is only saved since she is still fertile.)

Overall, the portrayal of gay characters in the Hulu drama mirrors how some parts of the world treat LGBTQ individuals. (Gay men in Chechnya, for example, are currently being tortured and killed merely because of their sexuality.)
Below, The Hollywood Reporter caught up with Wiley and Bledel to delve into the horrifying scenes of author Margaret Atwood’s book come to life, the way LGBTQ characters are portrayed in the series, feminism and what’s next. 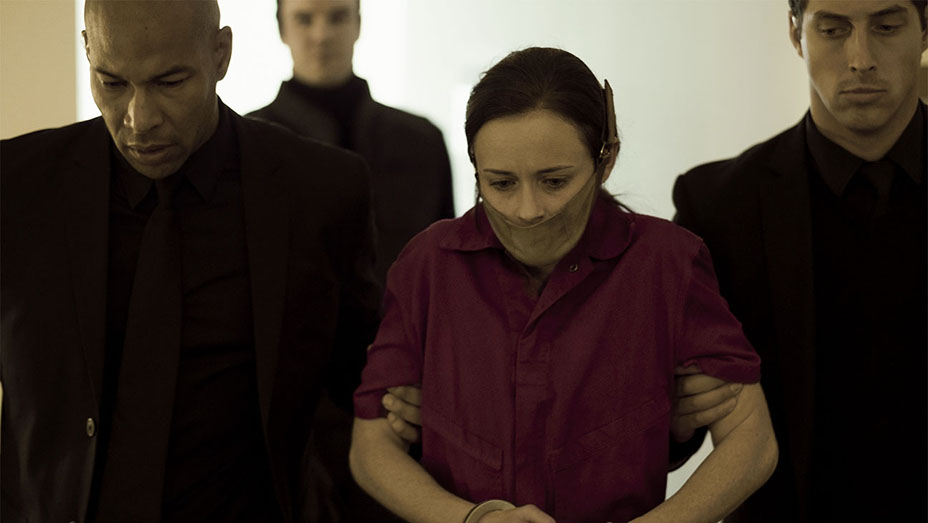 Moira, pre-Gilead, is fiercely independent and speaks her mind. Yet post-Gilead, she smartly becomes a more passive character. Why?

Wiley: With this horrible regime in Gilead, Moira has to be able to access different parts of herself at different times for her survival. All the women in this time have a different toolbox and depending on the situation have to use different tools and put away certain things when they are not necessary or when they will put them in danger. One of the things Moira does is use — especially pre-Gilead — are tools that other people definitely wouldn’t use in situations because of how strongly she feels about women and feminism in general.

You brought up the word “feminism.” The panel for the show at Tribeca made headlines because the cast and producers largely downplayed that Handmaid’s Tale is a feminist show. Why do you think that happened?

Wiley: Sometimes people can be afraid of that word, but I don’t think it’s anything to be afraid of. I wonder if some of the things from my panel and my other cast mates got a little misconstrued. What they were trying to say is that there are so many things in this for people who identify as feminists and there are things in this show that people can get out of it that don’t identify as that. The show is so multilayered, and a lot of people should be excited about it, however they identify.

The Secrets From Hulu's 'The Handmaid's Tale' Set Revealed

Ofglen doesn’t speak at all in the third episode, and half her face is covered nearly the entire time. How do you bring out the character physically in that situation and how do you prepare?

Bledel: Putting that facemask on in the scene did put me in a different mindset, it is a very real sort of restraint. Besides that I was also handcuffed and wearing a prison-issued garment, so all of it got me into the right frame of mind. In terms of preparation, I just worked on the scene. I didn’t do anything physical, necessarily.

Historically, women have turned on each other instead of building each other up. How do you think the show has tackled that issue?

Wiley: The show does a really good job in highlighting that. The structure of the show at its core is women pitted against each other. Because of the men in charge of this system, they’ve created this caste system for women that gives some of the women in higher places a false sense of authority. You have women who are able to just look at other women and from the color of the clothes they are wearing and they can know how they’re supposed to interact with each other. It’s a really horrible thing but genius in a way to pit them against each other because once you are, there is no community anymore. There is just people trying to keep each other down.

Showrunner Bruce Miller said it was really important that Moira wasn’t just the gay best friend. What kinds of conversations did you guys have around that?

Wiley: That is just one part about who she is, but I don’t think it’s a character trait. When I think about Moira and the kind of person she is, her sexual identity is not something that comes up immediately. I think about her being a strong woman, being this badass character that stands up for herself and for all the women who cannot stand up for themselves. She is someone who will survive. She is someone who bolsters Offred’s character when she’s feeling down. The memory of Moira is one of the things that keeps her going. It’s just a fact of who she is, just like the fact that she’s black. And the fact that she’s a woman. They inform so much about her, but they’re not exactly character traits of who she is as a woman.

'The Handmaid's Tale': Rape, Mutilation and That Shocking Death Explained

The Bury Your Gays trope went mainstream in the past year. How is Handmaid’s working to ensure that it doesn’t perpetrate that?

In terms of Ofglen’s storyline, Bruce said that what made the genital mutilation scene so shocking was that it happened to a white girl that looks like Alexis Bledel. Would you agree with that?

Wiley: I absolutely agree with Bruce on that. In the history of television and what we’ve been shown as the ideal of beauty in terms of the perfect woman or the perfect family — I’m thinking all the way back to Leave it to Beaver and things from that time — you have this perfect, pristine, white woman of a certain body size and certain beauty. It’s become what we think of as beauty. To have Alexis, who in a way definitely shows that kind of beauty, is shocking to people. It’s such a smart choice to be able to use her in that way. The show is shocking in so many ways, but I applaud Bruce and the rest of the writing team for not shying away from that. For being able to show all the horrible realities of Gilead.

Given who the vice president is, do you think a scene like that with a Westernized woman is that far-fetched?

Wiley: That thought is so scary to me. It’s hard to face something like that, just like it’s hard to watch a scene like that. I would hope in my heart of hearts that we are farther away from that than closer to it. But as we have seen through the campaign, all these things that could happen that we didn’t think could happen. That’s one of the messages of the show, that we need to, as a community, stay vigilant, never become complacent and when there are things that we’re faced with like that to remember that just by having a thought of, “Oh that will never happen” is not where we should stop. We should just remember that that is something that could happen. We should always think there are things that could happen and stay in that mindset rather than just becoming complacent.

Bledel: I’m not aware of it happening in the U.S, thankfully. It would obviously be just horrible if it ever did. It’s a horrifying thought.

'The Handmaid's Tale': Elisabeth Moss Opens Up About the Hulu Drama's Harrowing Start

How does the hanging and mutilation impact Ofglen going forward?

Bledel: She’s recovering psychologically, but the pain she’s experienced and the trauma is very deep. It’s not something she’ll get over easily, if at all — ever.

In the series, women are not allowed to have a voice and so that means scenes without a lot of dialogue. How do you tackle that and inject personality or resistance into a moment?

Wiley: It’s one of the things that I really enjoyed exploring as Moira. Even in just the pilot where you see Offred’s character and Ofglen’s character relating to each other and finding ways to just by a movement of the head or looking at each other in a certain way how they can say worlds to each other without using words. It’s not even necessarily something that becomes conscious. It is really just a product of having to survive in this society that they’ve found themselves privy to. It’s one of the things throughout the episodes that I found so much life in that and found out so much more about the character just by the way she moves or uses her hands or moves her head. Especially between Offred and Moira, who have known each other for so long, there is a non-verbal communication that I feel like is always ever-present.

Moira is a big character but she’s not super present in the first three episodes; when will her storyline pick up?

Wiley: There are so many moments that I’m proud of in this show. I haven’t been as excited about something like this in a long time. Viewers will see Moira and become familiar about the type of woman that she is. I’m excited about that.

What’s one thing you hope people take away from watching this show?

Wiley: On a project like this where the views of the show and the message with the show really align with some of my own thoughts and feelings, I hope that it really opens up some honest conversation. People having thoughts and conversations and any kind of engagement with each other or with their own selves about thinking about things in a different way, of seeing other people’s points of views and things like that. I’m definitely not the kind of person who wants to push anything down anyone’s throat, so I don’t really mind what the outcome of the conversation is but just that people are talking about it is very important to me.

New episodes of The Handmaid’s Tale are released each Wednesday on Hulu. What did you think of the first three episodes? Share your thoughts in the comments below and bookmark THR.com/HandmaidsTale for full coverage.

How 'The Handmaid's Tale' Became the Most Unintentionally Relevant Show Ever

'The Handmaid's Tale': Elisabeth Moss Opens Up About the Hulu Drama's Harrowing Start