As head of the makeup department on The Handmaid’s Tale, which is nominated for 11 Emmy awards this year, Burton LeBlanc is responsible for the visual look of all the major players on screen. From the muted and stressed skin tones of the handmaids to the fatigued and famished appearances of women fighting for their lives in the colonies, the veteran makeup designer is frequently met with steep tasks that require creative strategy.

“It’s a challenge to keep it real and raw and super emotional, and not be distracted by the makeup, especially with the camera so close up,” LeBlanc explains in an interview with The Hollywood Reporter. The latest episode sees June confined to a hospital, rapidly deteriorating and struggling with her sanity. LeBlanc recalls, “Visually, I wanted her skin tone to be paler, with heavily red eyes and bruised knees. As each day and night passed while Ofmatthew grew closer to death, I had to show June looking much worse, always on the edge of completely losing it, but keeping it together as best as she could under the circumstances.”

In his interview with THR, LeBlanc breaks down his process for episode nine (airing on Wednesday, July 17), including the steps involved in mapping looks for different characters, how he uses the production design as inspiration and his interest in the way makeup contributes to character building.

Can you describe your approach to the visual trajectory that June takes while confined in the hospital?

June has been confined in the hospital for a very long time. While she’s there, there’s no sunlight, and every day she’s praying on her knees for hours on end. She’s not allowed to do anything or go anywhere, and it’s taking a mental toll on her. Visually, I wanted her skin tone to be paler, with heavily red eyes and bruised knees. As each day and night passed while Ofmatthew grew closer to death, I had to show June looking much worse, always on the edge of completely losing it, but keeping it together as best as she could under the circumstances.

How did you use the muted colors in the hospital setting to influence the makeup looks of the characters?

I used the hospital’s colors, especially the bright lights and white-washed walls, to showcase her makeup. Ahead of filming, I find out what lighting will be used and what backgrounds June will be against, so I can apply just the right amount in the makeup trailer knowing what the lighting is going to bring out on set.

There are subtle enhancements to June’s makeup such as dry, cracked lips and fatigued reddish eyes, that aid the storytelling so profoundly. When you get the script for a new episode, what’s your process in mapping out the different looks for the major characters?

When I read the script for an upcoming episode, I get a sense of what the characters are going through and make adjustments to their looks based on that. I also make a point to speak with the actors to get their input. Commander Waterford has some really heavy, emotional scenes this season — he’s crying and worn down emotionally, which had to be shown on his face. 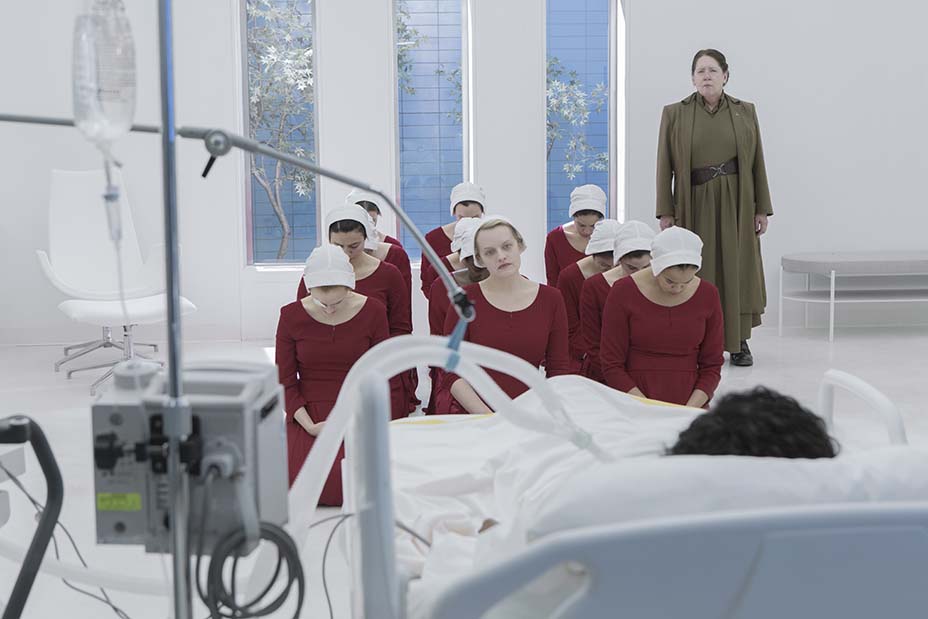 How do you collaborate with the lighting and camera departments to achieve looks appropriate for a darker production?

Since I’ve been on the show since the beginning, I know what the lighting will be, and absolutely use it to my advantage while doing the makeup. If there’s any lighting that I want or need adjusted to showcase makeup better, I have a conversation with our DP.

What visual or historical influences have you drawn upon for this episode?

I don’t have a specific visual or historical influence for this episode in particular. My aim was to keep it raw and real, which in turn will help make the scenes super emotional and pull the viewers into the story. I really want the audience to feel, and that’s always at the top of my mind. Would I buy it? Does what I’ve done for makeup look accurate, and do the viewers believe it?

Which moment in the story of episode nine presented the biggest artistic challenge?

It’s always a challenge to keep it real and raw and super emotional, and not be distracted by makeup, especially with the camera so close up in these scenes. My trick is to use the character’s face and lines and natural shadows and accentuate them. Red eyes are very emotional not only for showing crying, but rage, and June is feeling both for what she’s been through and continues to go through in moments of episode nine. I’m so proud of this episode.

What fascinates you about the way makeup contributes to character building?

I’m really in my element with the makeup I get to do on Handmaid’s, especially with this most recent episode given what June is going through and has witnessed up to this point. I think it’s apparent just by looking at the characters’ faces that they’ve been through something. You can tell that the Handmaids are a lot more worn down and broken now than they were when they first got to the Red Center. You can see changes in them, in Commander Waterford in his beard, which looks more aged, and you can see the emotional toll being taken on Serena this season as well.

I love hearing back from fans of the show and from a makeup standpoint how much they love and appreciate the makeup — that makes me very happy. How it feels for them. The feeling they get is obviously from the actors and characters, and I know I’m doing my job when they are not “distracted” by the makeup, but it successfully aids with the storytelling. The feeling fans get and what they remember from experiencing this show makes me proud and happy. I get a lot of enjoyment artistically.